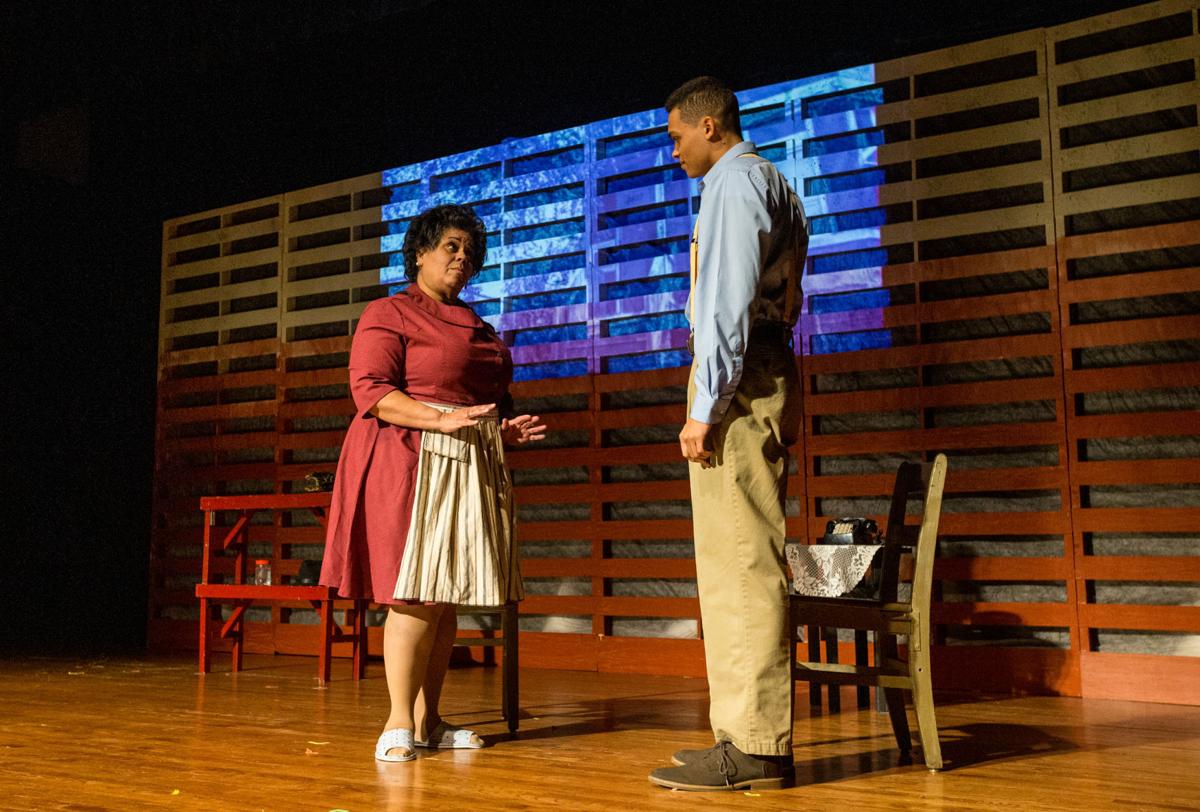 Emmett Till, played by Thaddeus Jackson, right, talks with Mamie Till, played by Harrisonburg Mayor Deanna Reed, during a dress rehearsal of "Anne & Emmett" in the Lehman Auditorium at Eastern Mennonite University. 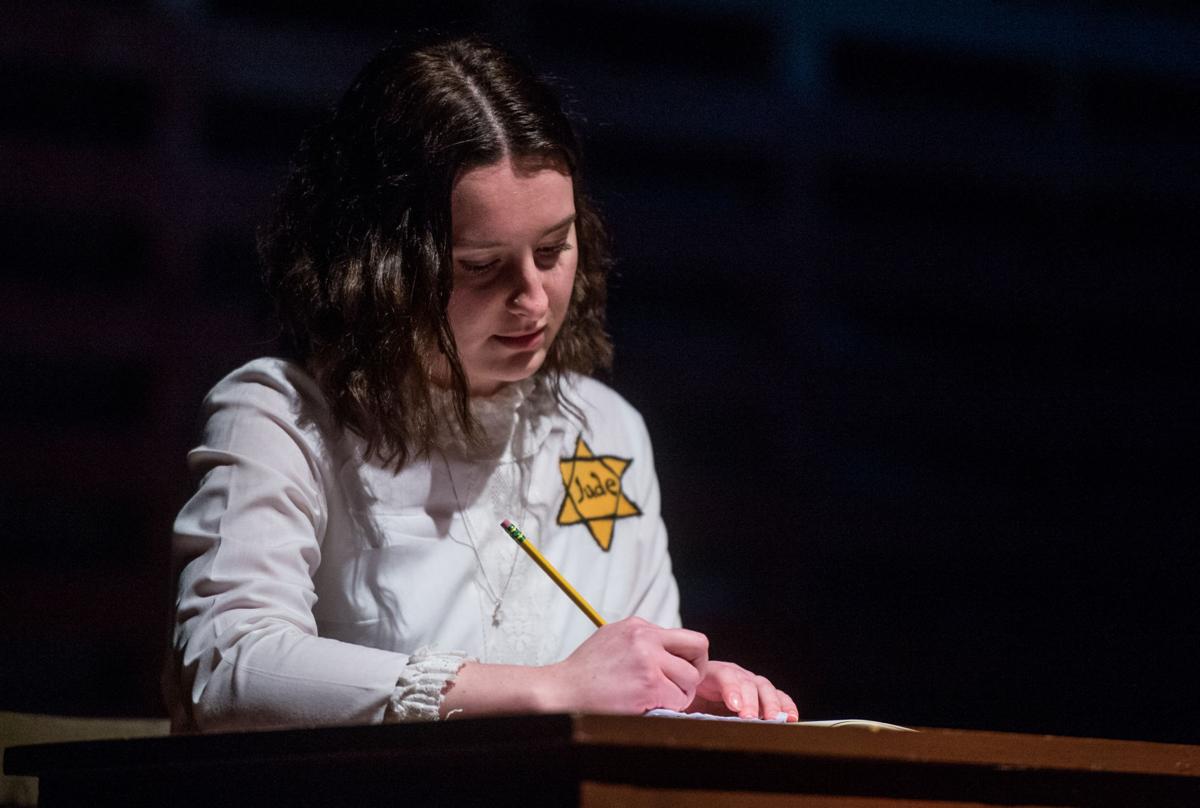 Anne Frank, played by Greta Schrag, writes in her diary during a dress rehearsal of "Anne & Emmett" in the Lehman Auditorium at Eastern Mennonite University. 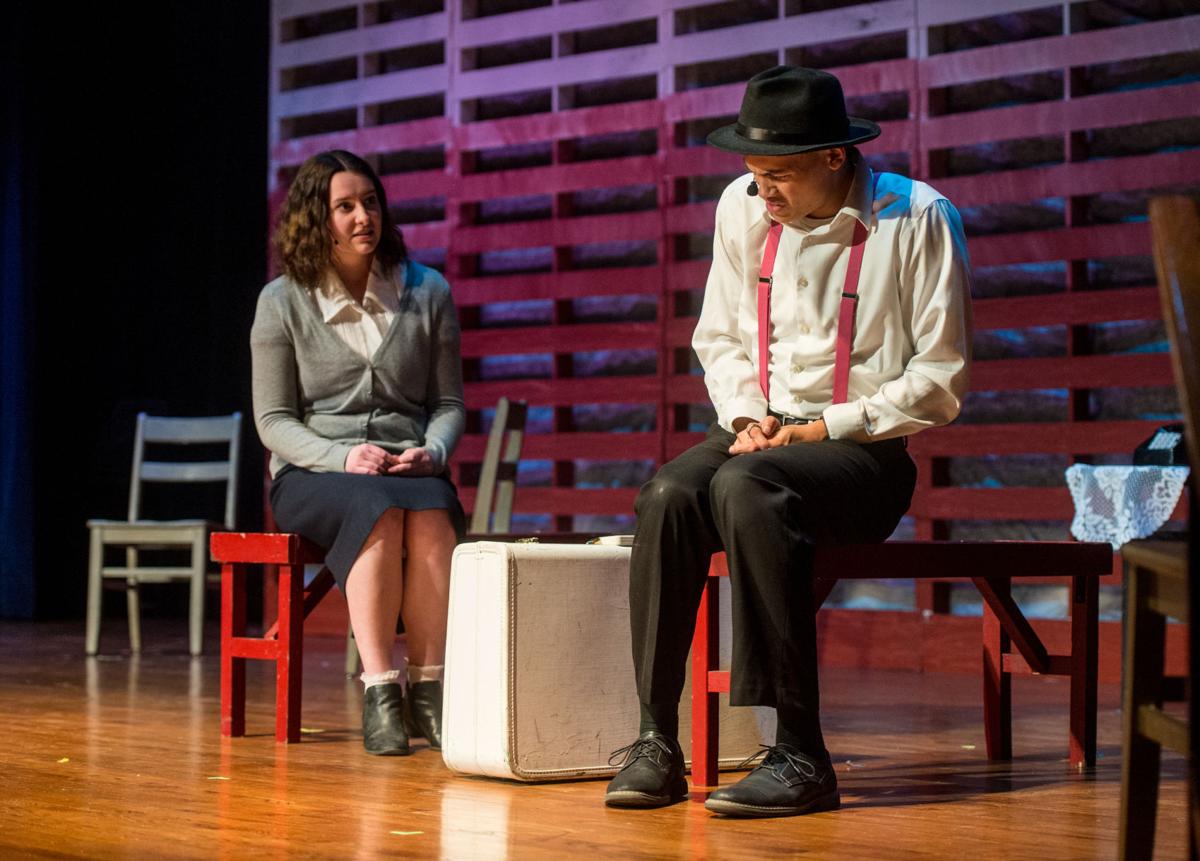 Anne Frank, played by Greta Schrag, reassures Emmett Till, played by Thaddeus Jackson, during a dress rehearsal of "Anne & Emmett" in the Lehman Auditorium of Eastern Mennonite University.

Emmett Till, played by Thaddeus Jackson, right, talks with Mamie Till, played by Harrisonburg Mayor Deanna Reed, during a dress rehearsal of "Anne & Emmett" in the Lehman Auditorium at Eastern Mennonite University.

Anne Frank, played by Greta Schrag, writes in her diary during a dress rehearsal of "Anne & Emmett" in the Lehman Auditorium at Eastern Mennonite University.

Anne Frank, played by Greta Schrag, reassures Emmett Till, played by Thaddeus Jackson, during a dress rehearsal of "Anne & Emmett" in the Lehman Auditorium of Eastern Mennonite University.

Mamie Till did all that she could.

Before sending her son, Emmett Till, to visit relatives in Mississippi, she gave him “the talk.”

Not about sex, but about “the rules.” She warned her 14-year-old son not to look any white women in the eye. To cross the street when people approached.

She did all she could. But it didn’t stop the 1955 lynching of Emmett Till, who was kidnapped, tortured and ultimately killed for allegedly whistling at a white woman.

Though Till’s murder was a watershed moment in the early Civil Rights movement, Celeste Thomas said this sort of talk is still a reality for African Americans.

“Unfortunately, we still continue to have mothers who are going through this with their children being killed and murdered in the streets,” said Thomas, director of Eastern Mennonite University’s Multicultural Student Services office.

EMU’s production of “Anne & Emmett,” which opened Friday, plays out the intense scenes of Emmett Till’s last conversation with his mother, Mamie Till, portrayed by Harrisonburg Mayor Deanna Reed.

“It’s been tough for me. We know the story of Emmett Till. When you have aunts and grandparents who lived during that time, it’s connected to you,” Reed said.

Part of EMU’s Martin Luther King Jr. Day observances, the one-act play written by Janet Langhart Cohen, focuses on the theme of silence in the face of injustice.

An imagined conversation between Anne Frank, a young girl who died in the Holocaust, and Till takes place in a place called “Memory,” after each of their deaths.

The university’s theme for this year’s MLK Day observances is a quote from King’s 1958 book “Stride Toward Freedom: The Montgomery Story.” King speaks about the danger of silence on behalf of bystanders.

“This [play] fits very well with that because there was silence on both parts of both of those situations. Our goal is to … not be compliant in the silence,” Thomas said.

In addition to the play and a variety of programming through the week, Thomas organized a bus trip to Washington D.C., to inform the play.

Members of the cast, crew and student body were invited to visit the United States Holocaust Memorial Museum, the National Museum of African American History and Culture, including the Emmett Till exhibit, and the Martin Luther King Jr. Memorial.

On the trip in early December, they explored the context behind the show.

It was the context that made Thaddeus Jackson, a sophomore who portrayed Emmett Till, think about what it felt like in the world of the play.

“I imagine I’m there; I imagine what the floorboards felt like. I feel the energy of what situations are going on and how it makes me feel,” Jackson said. “[I try] to visualize the atmosphere and the energy. With something that grotesque and horrific, the energy that hangs in the air is very dense and very heavy.”

Jackson had known all about the story of Emmett Till before the show. He remembered when he heard about Mamie Till through a Dave Chappelle bit.

“The punchline of the joke was centered around Mamie Till and he called her a ‘gangster.’ She wouldn’t let them forget and she fought to have the casket open,” Jackson said. “We don’t realize how intense things were back in history. Now, our problems are, someone said something bad on the internet.”

Jackson said the tough conversations in the play ultimately lead to mutual understanding, learning and empathy.

He said he hopes people who see the play will receive a simple but poignant message from it.

“Treat people as a human race instead of as a colored race,” he said.

Greta Schrag, an EMU sophomore, plays Anne Frank. She said portraying Frank taught her how challenging it can be to have tough conversations.

Her character’s dialogue with Till is filled with misunderstandings and unfamiliar territory.

“We talk about truth in the show and how we need to keep telling these stories. We can’t just gloss over them and pretend they didn’t happen,” Schrag said. “In order to actually have empathy for a person you actually have to understand and recognize the background that they came from. I think that’s really important.”

Exploring tough conversations is something the play’s director, Ezrionna Prioleau, said she’d wanted to bring to EMU for years.

“I really love the conversation that’s had within this play and the themes that are within it,” said the graduate student who assists in Thomas’ office. “I thought EMU would be a great place to start this conversation and continue this conversation of how hate is affecting the world and the communities that we live in.”

The shows continues today at 2 p.m., and Sunday at 5 p.m. in EMU’s Lehman Auditorium. Masks are required for the performances that are free and open to the public.

To continue the conversation, EMU will host a virtual talk-back about “Anne & Emmett,” with Thomas and Bob Bersson, a frequent contributor to EMU’s Center for Interfaith Engagement and retired James Madison University professor, according to the press release. The event will be livestreamed to the public on EMU’s Facebook page on Monday at 4:15 p.m.

Reed said she hopes the young people will take what they’ve learned from “Anne & Emmett” into the community.

A powerful two-hour show, beginning with a lot of intense dialogue and building up to a gut wrenching crescendo. I hope the weather doesn't result in a cancellation.