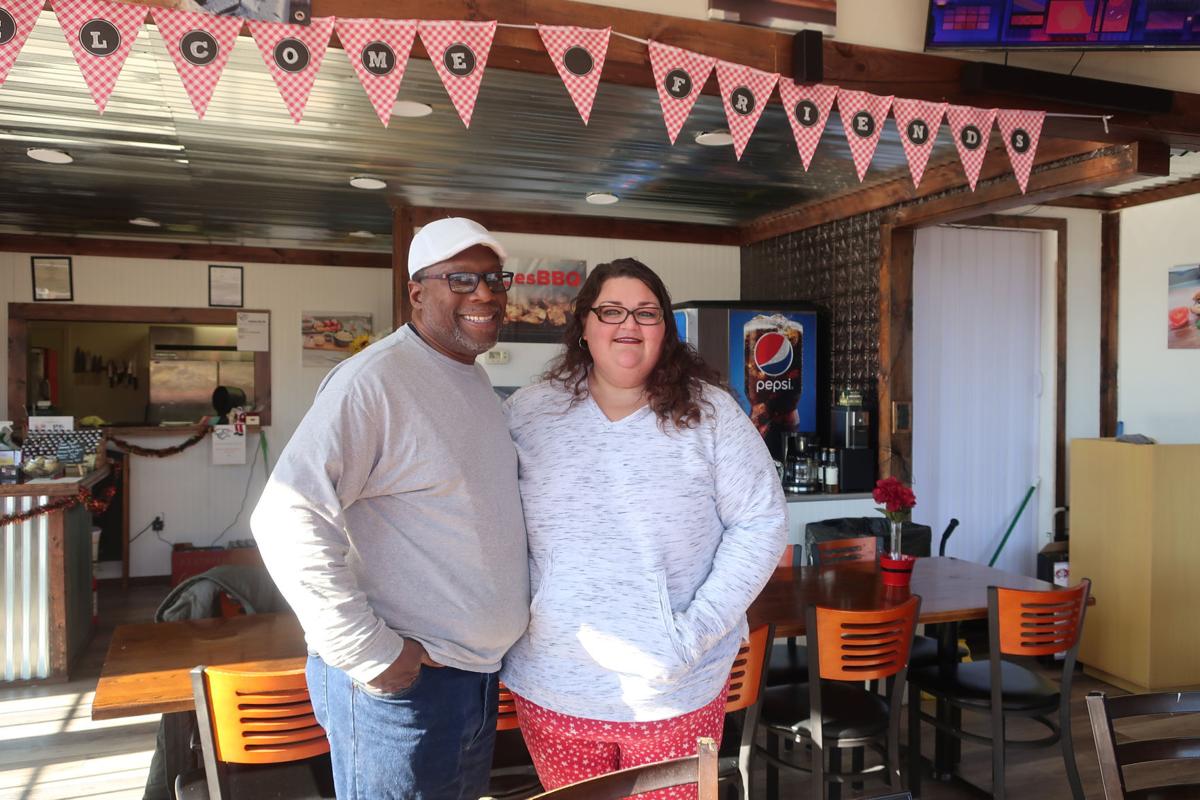 Dwight Townes, left, and Donnetta Trawick stand inside Townes Homemade BBQ in Broadway. The couple started the business at the Broadway Farmers Market in early 2020. 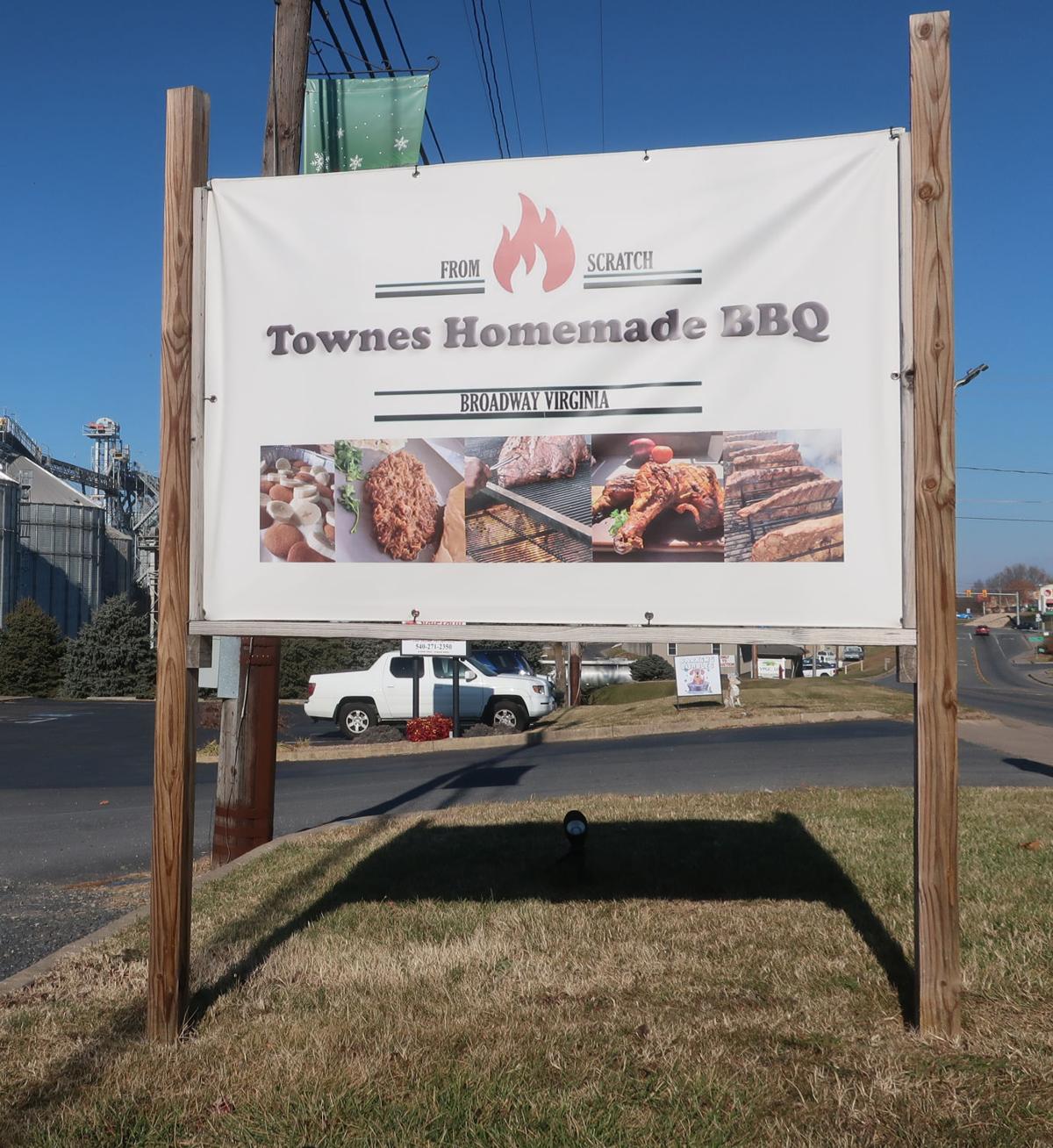 The restaurant opened in the location on Aug. 1.

Dwight Townes, left, and Donnetta Trawick stand inside Townes Homemade BBQ in Broadway. The couple started the business at the Broadway Farmers Market in early 2020.

The restaurant opened in the location on Aug. 1.

Donnetta Trawick has a hearty laugh that fills a room.

With that laugh, she explained how she first met Dwight Townes when they both worked at the Pilgrim's processing plant in Timberville.

“We met over chicken,” Trawick said.

For Townes, food had always been a common thread in his tumultuous life.

His mother was murdered when he was only 6 years old. As an adult, he said, he fell into addiction.

Originally from Trenton, N.J., Townes moved to Virginia nearly a decade ago for a new start.

While working at Pilgrim's, Townes dared to dream about opening a barbecue business of his own. When Trawick heard it, she said, she was all-in on helping him make it happen.

Selling barbecued chicken at the Broadway Farmers Market, a business was born in early 2020.

Townes cooked all the food, while Trawick talked with customers and did the marketing.

“She’s the brains of the operation. She has really brought this whole thing to life,” Townes said.

Returning each week with bigger and bigger grills that could cook more chicken, the operation quickly grew to meet demand.

With the end of the season approaching and a booming business, Townes knew he wanted to open a year-round spot.

Townes and Trawick found a small 16-by-10-foot shack on North Congress Street in New Market in October of 2020. While in New Market, Townes Homemade BBQ's menu expanded from only chicken to three kinds of barbecued meats.

When people requested new foods, the menu continued to expand, adding popular side dishes like macaroni and cheese.

The new location opened on Aug. 1.

The walls also feature detailed photography of the restaurant’s meats, sauces and dishes that she took.

Trawick said all the items on the menu are popular. She and Townes agreed the Jamaican jerk chicken is a standout.

The jerk chicken is smoked with hickory, red oak and cherry wood. It’s served with golden rice pilaf made with sazón, a spice mix.

The chicken is topped with cilantro and Townes’ spicy jerk sauce.

The chicken platter is served with traditional coco bread. Made with coconut milk, the pillowy bread is similar to Korean bao buns or a sweet Hawaiian roll.

Julie Jones, a resident of Broadway, said she eats Townes Homemade BBQ at least once a month.

She said the jerk chicken is delicious, but her favorite is the barbecued pork served with Townes’ original sauce.

“Their smoked meats and really special and the sauces he makes are just top notch,” Jones said.

Townes only offers one kind of barbecue sauce, which is based on a recipe started by his grandfather.

Townes said he spent at least six years transforming that recipe into his own blend.

“Nobody can copy that sauce. You can try, but you can’t copy it,” Townes said.

The sauce doesn’t hail from any one particular barbecue tradition. Sweet and tangy with savory and rich tomato, Townes said you won’t find sauce like his anywhere.

Trawick said the entire menu is the same way. It doesn’t follow any single barbecue tradition, but draws on styles that originated in Kansas City, North Carolina and Virginia for a taste all its own.

Everything is made from scratch, and Trawick said they only use the best ingredients they can get.

The restaurant’s banana pudding is made from real separated eggs, blended to a creamy, almost whipped texture. There’s a soft crunch from crushed vanilla wafer cookies and smooth banana flavor.

Trawick said she took her natural place as the manager of the business and the front of house manager.

“She makes you feel like she’s known you her whole life,” Jones said. “I’ve gone in last minute hoping to get a meal for unexpected company, and she’s come through for me.”

The couple-turned-business team has big plans for the space they’re settling into.

In the restaurant’s unfinished outdoor space, they said they’ll be adding an outdoor kitchen, a patio space, more signage and making improvements to the parking lot.

Townes and Trawick want to start serving breakfast and fried ice cream made from a secret recipe. Those items have to wait until the restaurant installs a new hood system in the indoor kitchen.

Jones said the restaurant is a "great addition to the community."

“It’s an easy stop in and out," she said. "It’s been a lot of different businesses, but I’m happy he’s there and I hope [Townes] stays a long time."