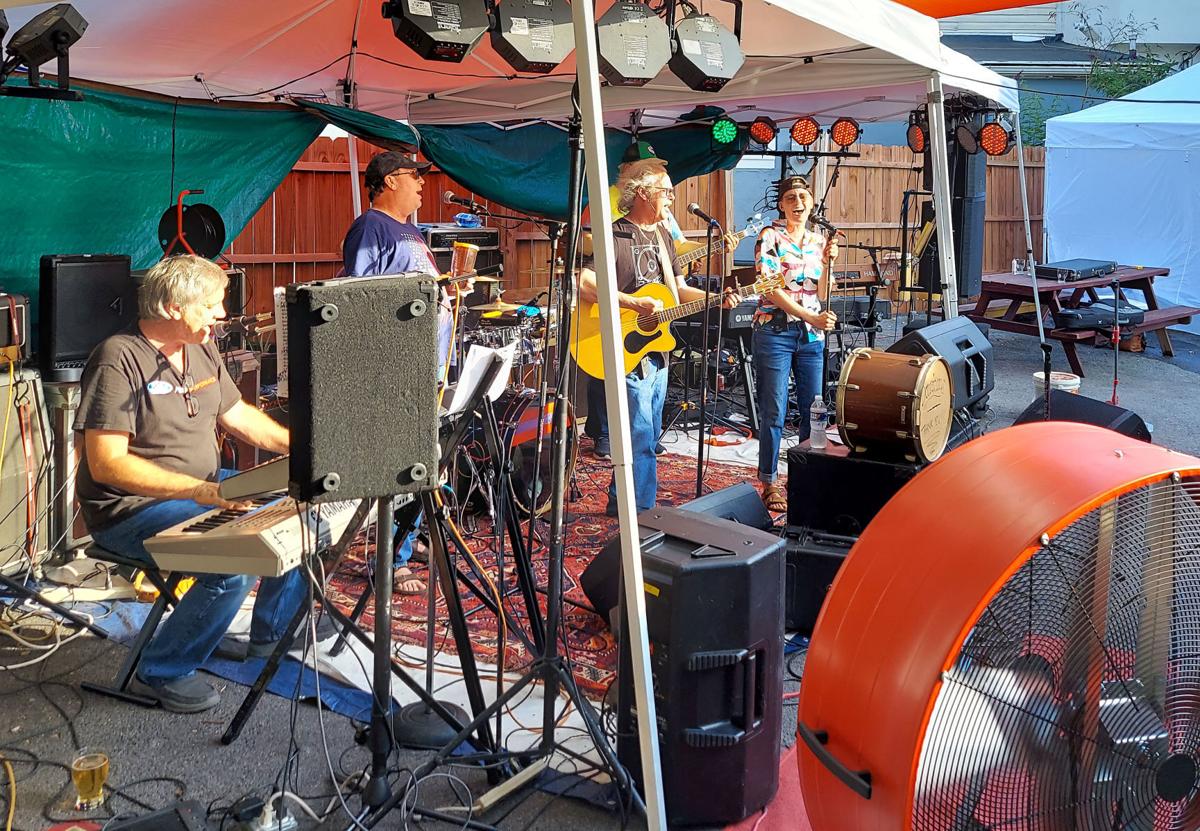 James Vaughan, second from left, sings with his daughter, Reno Vaughan, front right, as part of a performance by AfterShock during a benefit concert at the Virginia Beer Museum on Sunday. 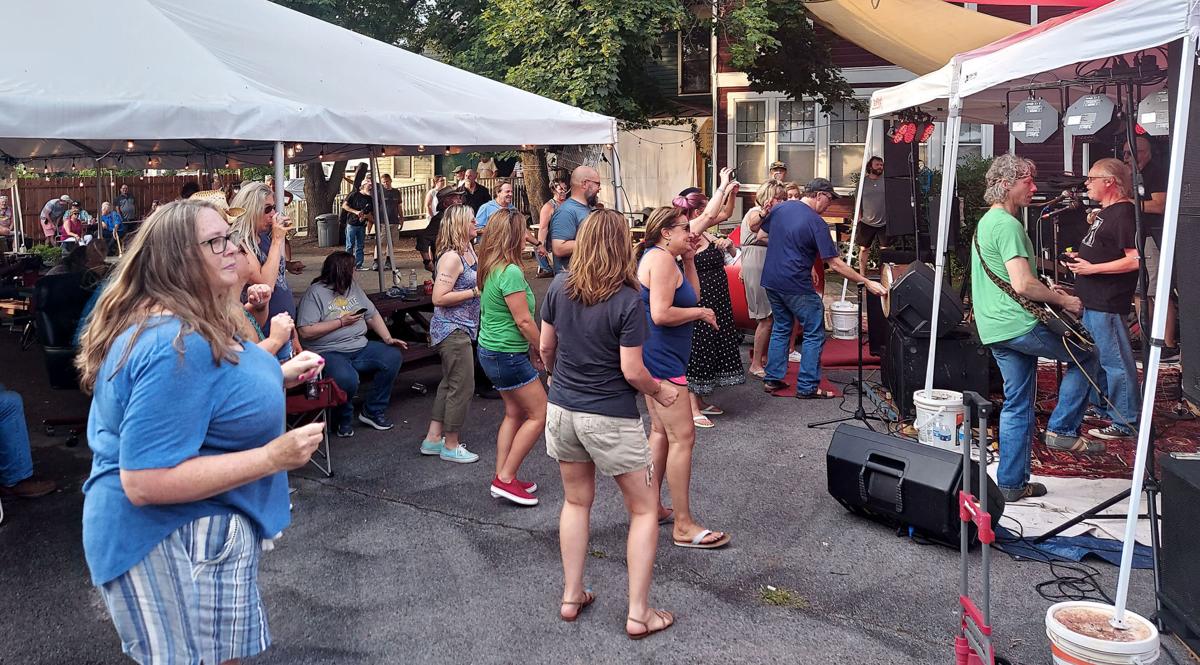 Attendees at the benefit concert for James Vaughan, of the band AfterShock, dance to the band’s cover performance of The Rolling Stones’ “Sympathy for the Devil” on Sunday at the Virginia Beer Museum. 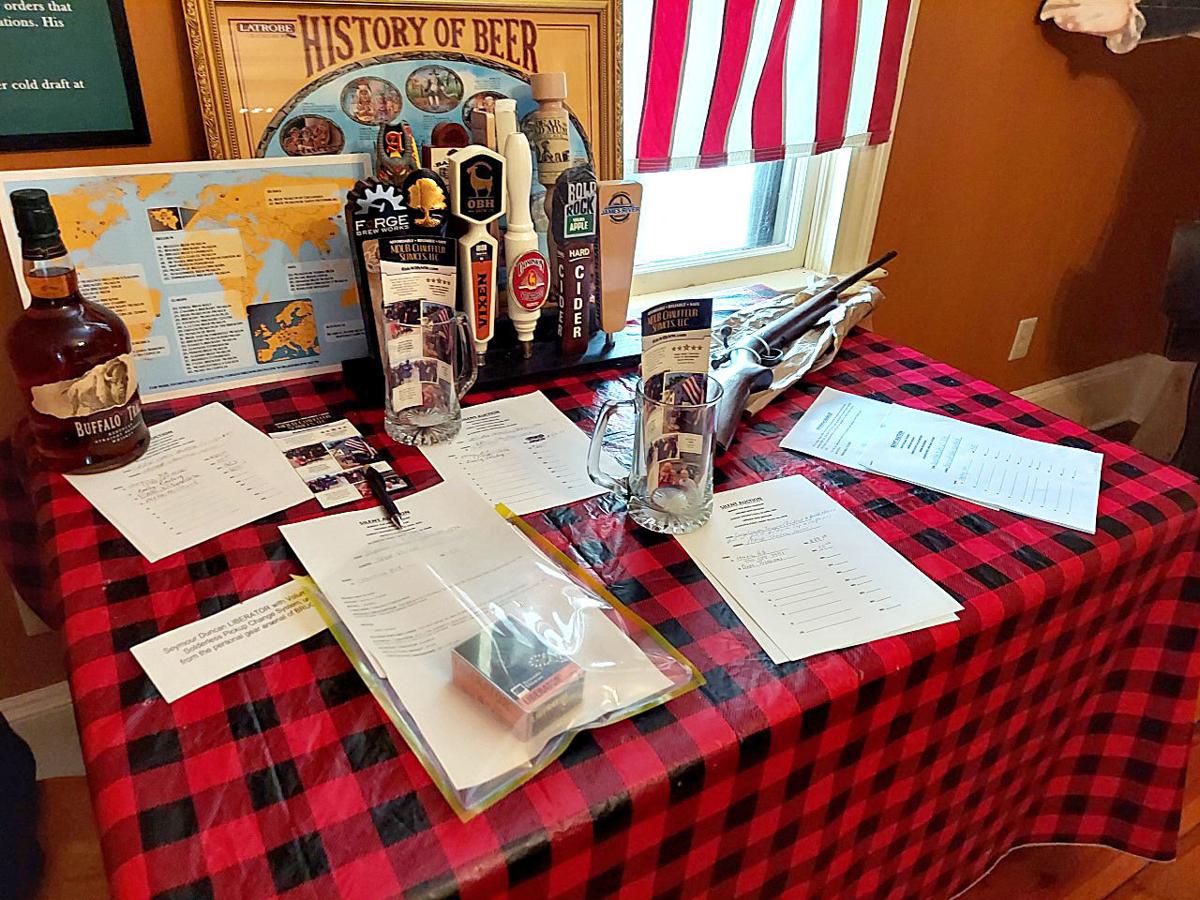 These are some of the items up for auction during the benefit concert for James Vaughan.

James Vaughan, second from left, sings with his daughter, Reno Vaughan, front right, as part of a performance by AfterShock during a benefit concert at the Virginia Beer Museum on Sunday.

Attendees at the benefit concert for James Vaughan, of the band AfterShock, dance to the band’s cover performance of The Rolling Stones’ “Sympathy for the Devil” on Sunday at the Virginia Beer Museum.

These are some of the items up for auction during the benefit concert for James Vaughan.

FRONT ROYAL – He’s going to keep playing and he has the support of community members from Front Royal and the greater Northern Shenandoah Valley area.

James Vaughan, in his 50s and a drummer for the local band Aftershock, suffered a stroke this spring that paralyzed the right side of his body. He’s right-handed.

On Sunday, at the Virginia Beer Museum, that support for him was on display all day during a benefit concert featuring several bands to raise funds that can offset the medical bills facing Vaughn. He was working as a framing carpenter.

“Today was a beautiful day,” Vaughan said. “A lot of my friends came out and showed me how beautiful they are, and I will never forget it as long as I live.”

Vaughan is up and able to move after some physical therapy, his brother Dewey Vaughan said. Family members in attendance kept an eye on James Vaughan after the long day, checking if his stamina was starting to fade and leading to a slower walking pace.

But it’s not going to hold him back, and certainly not from playing, he said.

“Oh I’m going to keep going,” James Vaughan said. “I only might make it through three songs a night all the way through because my stamina’s so down...but that’ll help me as I build up my stamina.”

His band has been billed as the top band coming out of Front Royal, playing mostly as the “Halloween Band” at the Lucky Star Lounge that has since closed down. They’ve been playing for about 30-40 years in total, Dewey Vaughan said. They were scheduled to perform at the Virginia Beer Museum before the stroke happened, altering their plans.

Playing Pink Floyd’s “Comfortably Numb,” and The Rolling Stones’ “Sympathy for the Devil,” the band was in attendance for the day, with the benefactor himself singing and playing the tambourine during some of the songs.

It’s surprising, James Vaughan noted, of the different ways he’s been playing music lately, in perhaps a different fashion than he normally did after the stroke. Being right-handed though, he will still play that way, because playing left-handed he said is “...weird.”

“You can’t do it a certain way like you used to, but you find another way,” he said. “That happens now and then.”

The day of the concert, which coincided with Father’s Day, was organized by Vaughan’s daughter, Reno Vaughan — who sings vocals for the band alongside her pop, Dewey Vaughn, Doug Hess, Dean Smith and Len Barnhart.

“I told her not to do it...she insisted on it,” James Vaughan said of his daughter organizing the event. Reno Vaughan sang Dolly Parton’s “Jolene” with the band and took some time to dance with the crowd for other tunes.

Dewey Vaughan, who was tasked with reaching out to all the bands to show up, thought the day went well, including tapping former Charlie Daniel’s Band drummer Gary Peacemaker to fill in playing drums for his brother.

“We had one practice,” Dewey Vaughan said of the preparation of the band’s performance.

“Hopefully, it’ll get better,” Dewey Vaughan said of his brother’s playing ability to stay with the band. “Strokes are weird.”

Leading up to the event, the Virginia Beer Museum on its Facebook page asked if people ever wondered what the Front Royal version of the “Woodstock Festival” would look like, with several musicians throughout the area coming to play or show up in person. Local musicians who came out in one fashion or another included Robbie Limon, The Seven Bends River Driven Band and others.

The event also featured a silent auction of several items to raise funds for James Vaughan, including a Rolling Stones poster, an autographed picture of guitarist Carlos Santana, guitar gear, a Winchester Model 67, two jean jackets each labeled as “Rock n’ Roll Jean Jacket,” and more. A drum at the front of the performance area had a slit through the middle of it collecting donations. Grilled concessions were also provided.

Dozens of people filled the back area of the museum, with people coming and going throughout the day, which began at 1 p.m. and went until about 9 p.m. Local dignitaries who showed up included Warren County Supervisor Cheryl Cullers and Walter Mabe as well as Front Royal Councilwoman Lori Cockrell. C & C Frozen Treats owners Will and Nina Huck also made an appearance.

Attendees Leo and Debbie Foltz spoke of James Vaughan’s personality of letting people know how he felt but helping anyone he could. After over a year-long limitation of live music performances, Sunday also brought an opportunity for people to get together for some shows, the Foltzes said.

On Monday, Dewey Vaughan said it looks like his brother’s bills will likely be covered.

“Anything I can’t use for my medical bills, I’ll donate it back...because it wasn’t my money to begin with,” James Vaughan said.