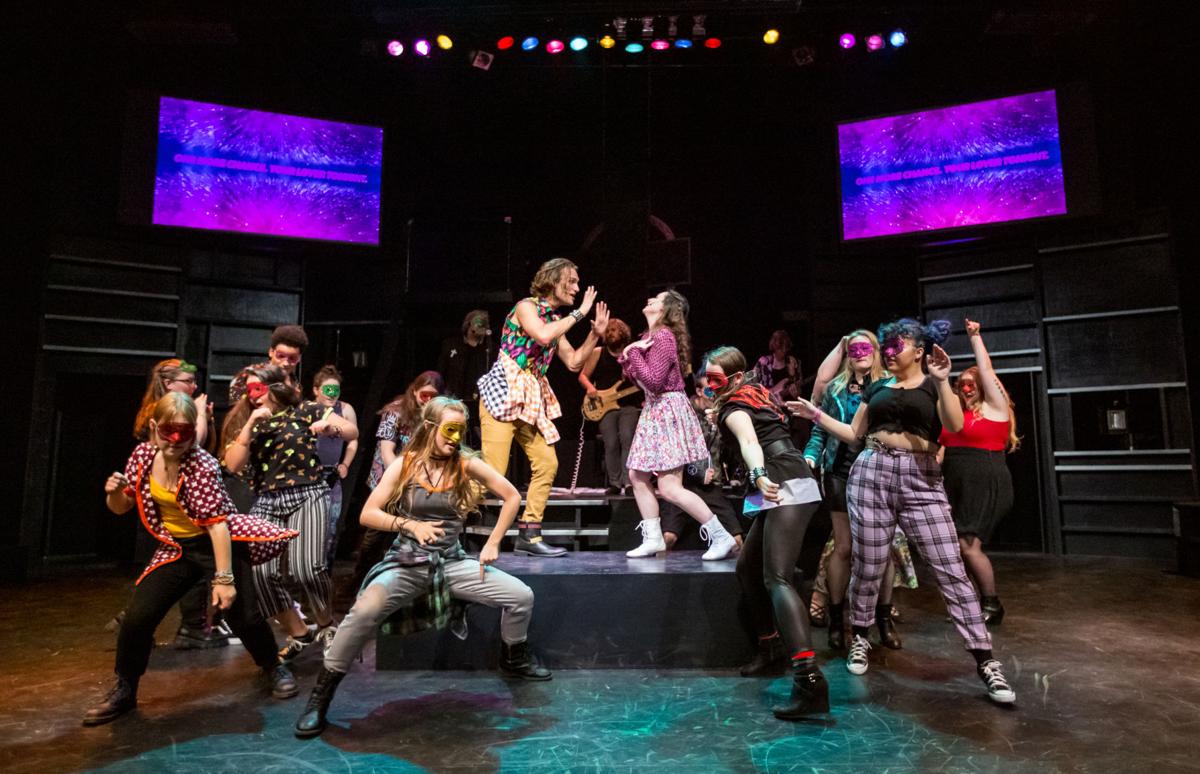 The cast of “U2 Romeo and Juliet” rehearses Wednesday at Eastern Mennonite University. 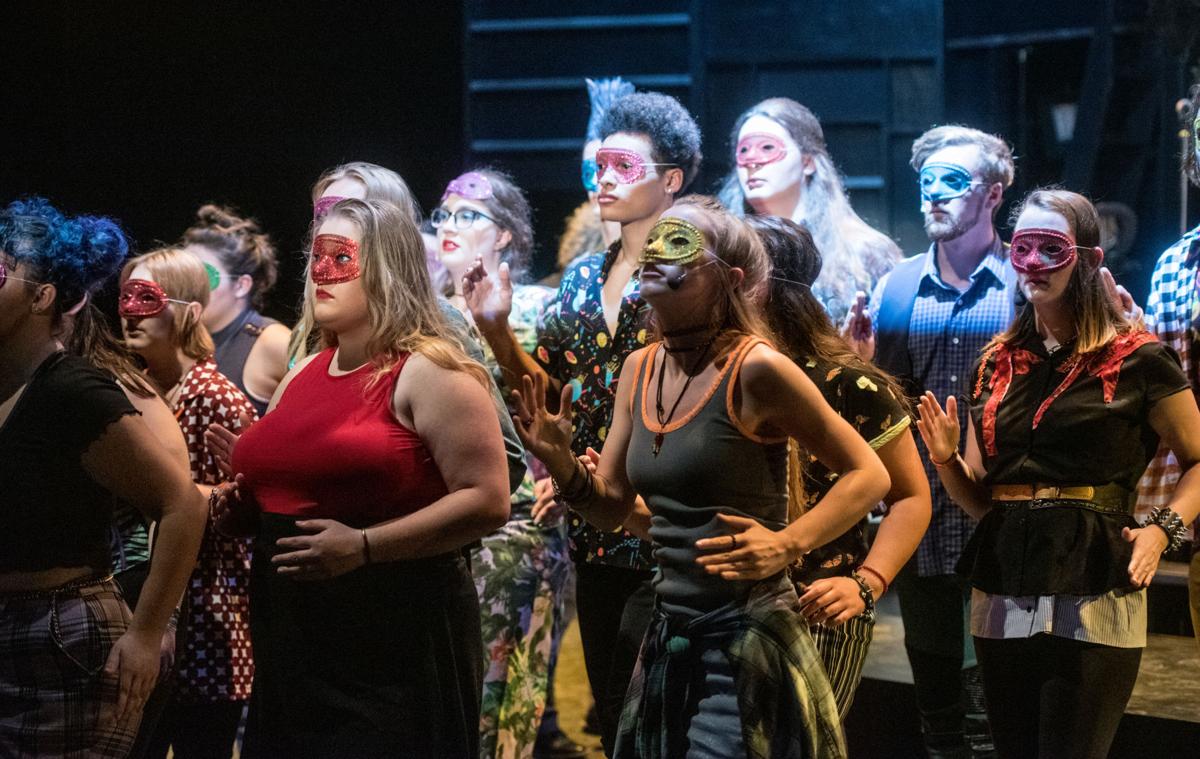 The cast of “U2 Romeo and Juliet” rehearse the dance during the Capulet ball Wednesday at Eastern Mennonite University. 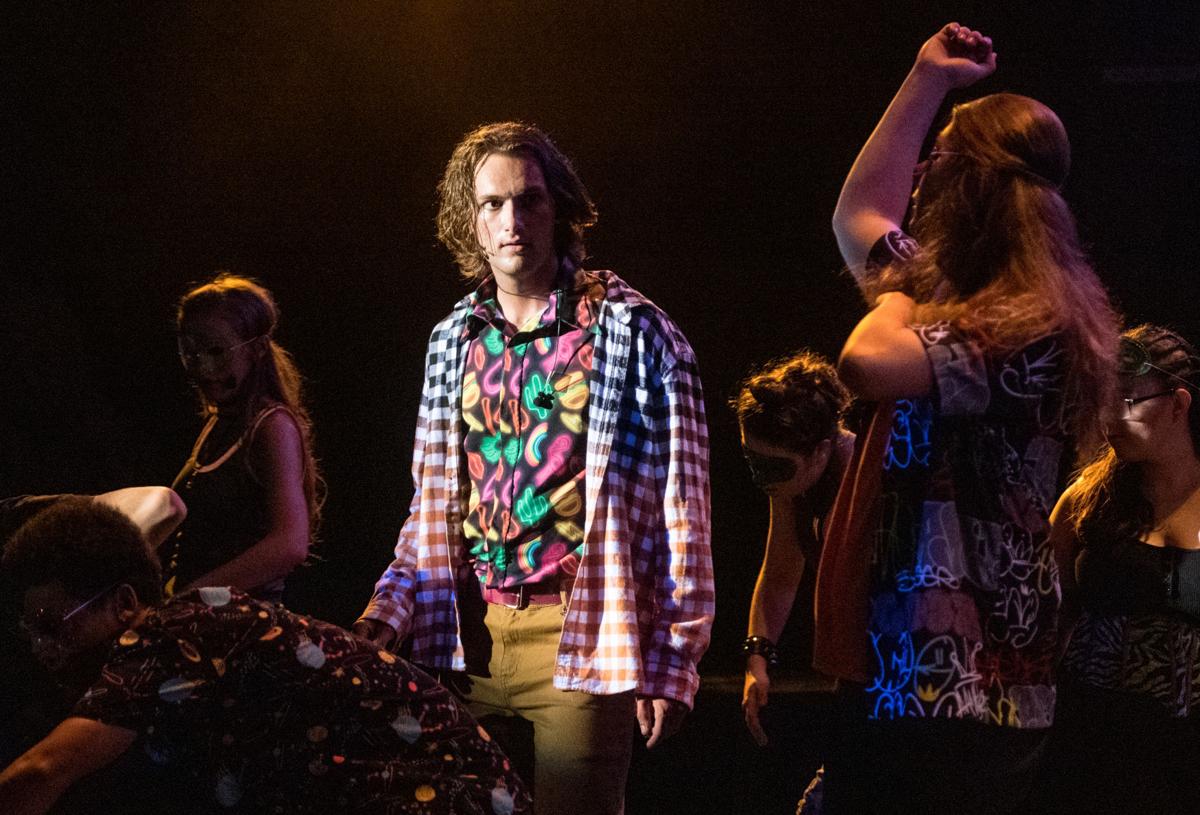 Romeo, played by Andrew Stoltzfus, looks across the Capulet ball at Juliet during a rehearsal Wednesday at Eastern Mennonite University. 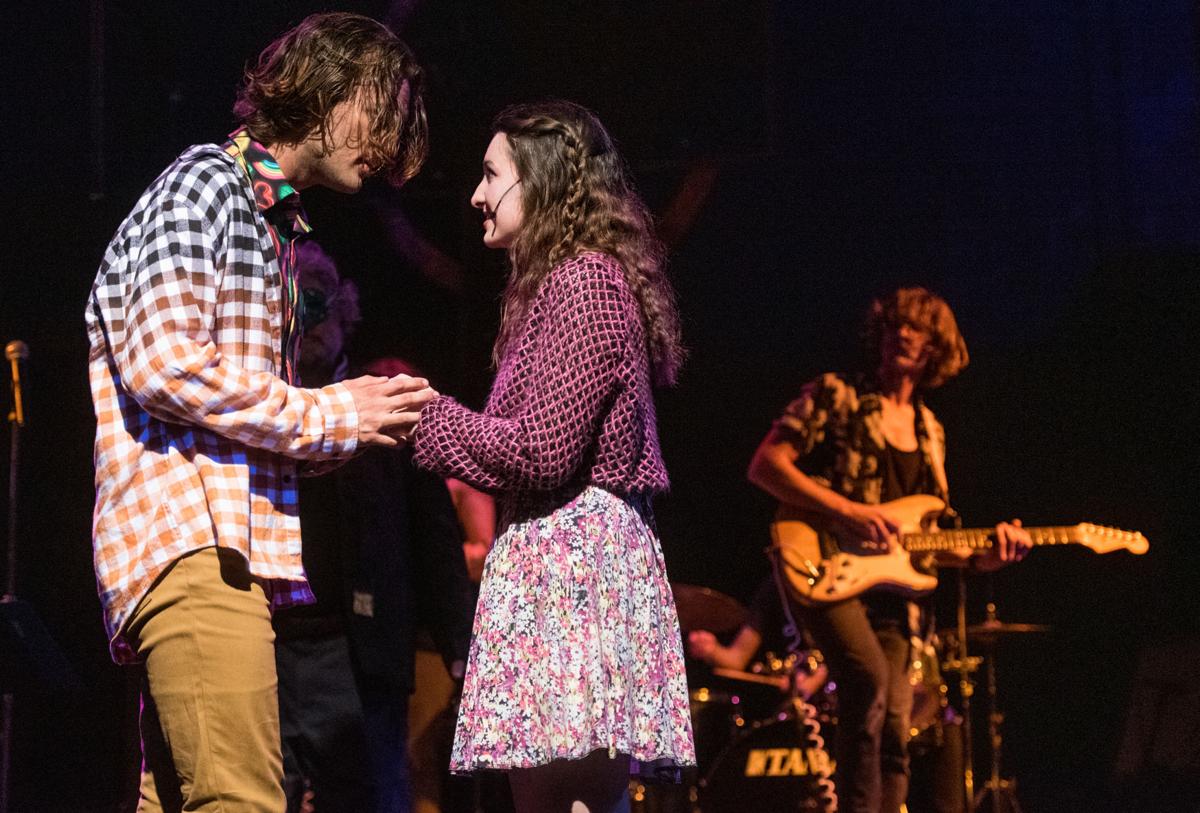 Romeo, played by Andrew Stoltzfus, meets Juliet, played by Greta Schrag, during a rehearsal of “U2 Romeo and Juliet” at Eastern Mennonite University Wednesday. 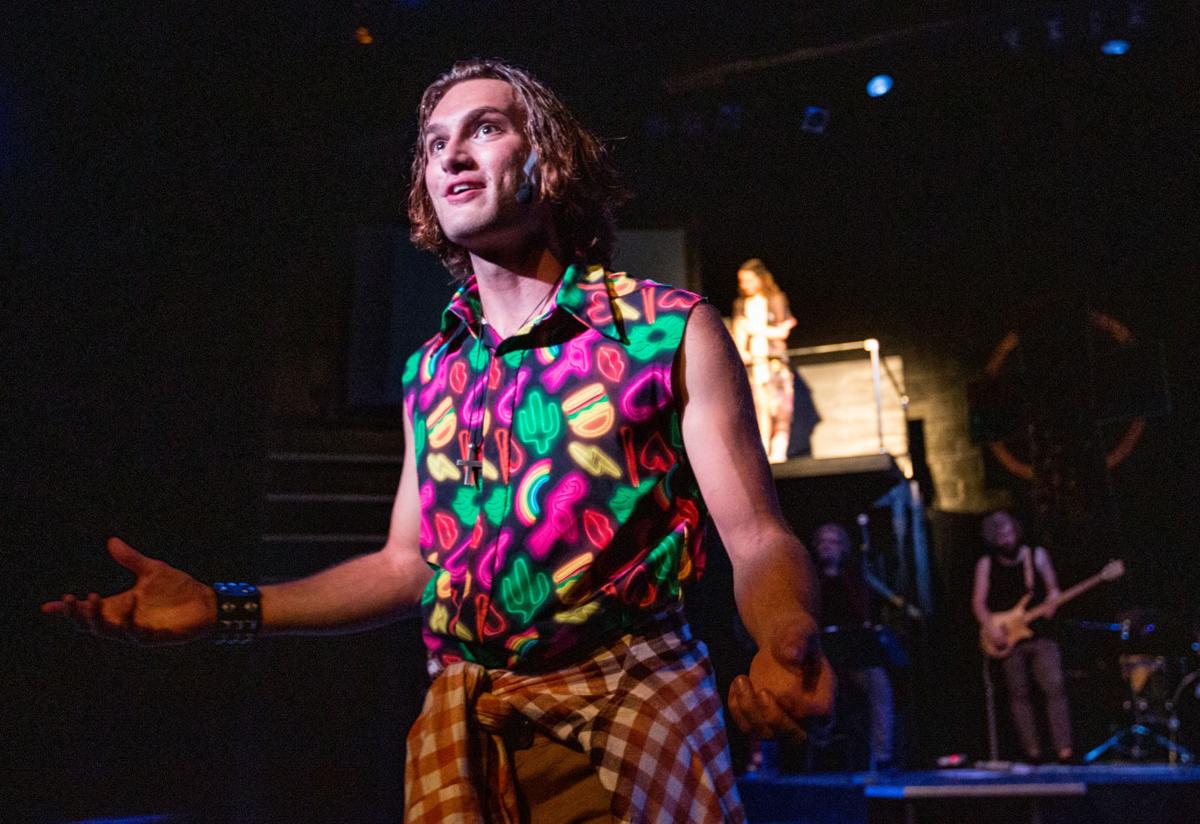 Romeo, played by Andrew Stoltzus, sings during a rehearsal of the balcony scene in “U2 Romeo and Juliet.”

The cast of “U2 Romeo and Juliet” rehearses Wednesday at Eastern Mennonite University.

The cast of “U2 Romeo and Juliet” rehearse the dance during the Capulet ball Wednesday at Eastern Mennonite University.

Romeo, played by Andrew Stoltzfus, looks across the Capulet ball at Juliet during a rehearsal Wednesday at Eastern Mennonite University.

Romeo, played by Andrew Stoltzfus, meets Juliet, played by Greta Schrag, during a rehearsal of “U2 Romeo and Juliet” at Eastern Mennonite University Wednesday.

Romeo, played by Andrew Stoltzus, sings during a rehearsal of the balcony scene in “U2 Romeo and Juliet.”

Greta Schrag, an Eastern Mennonite University senior, said playing the role of Juliet in EMU’s production “U2 Romeo and Juliet” has given her a lot of confidence on stage.

Schrag, clad in white, takes the stage in Act 1 following the first balcony scene for a sultry and spotlit performance of “Love and Peace or Else” from Irish rock bank U2’s album “How to Dismantle an Atomic Bomb.”

“[Juliet] is a little bit more impulsive than I am. But at this point, I feel like I’ve become the character, and the character has become me. This is my thing. I’m going to tell it this way and no one’s going to question that. I love ‘Love and Peace or Else,’ and trying to act all sexy. That feels really cool. I can actually tell this story,” Schrag said.

“U2 Romeo and Juliet” is an original rock musical based on William Shakespeare’s tragedy about two young lovers from feuding families. This version, co-created by Justin Poole, program director of theater at EMU, and Jerry Holsopple, professor of visual and communication arts, features U2’s music and visuals created by Holsopple and students in the Visual and Communication Arts Department.

“When Justin said that this was going to be the show, I couldn’t not do it. I had this feeling that this would be the one show that [if I didn’t do], I would really regret not being a part of. It felt like a once-in-a-lifetime chance,” said Schrag, whose previous roles include Teen Fiona in EMU’s production of “Shrek: The Musical.”

Part rock concert and part drama, “U2 Romeo and Juliet” begins in a 1980s-style “Club Verona,” a black lit stage with performers and large television screens showing visuals. The stage is set up to look like a 1980s rock concert, while also serving as the town of Verona, a crypt, a church and all the scenes in the play. The stage is centered around a local band, Prince Bellerose, comprised of Valentin Prince on vocals and electric guitar, Daniel Bellerose on electric guitar and vocals, and EMU alum Joseph Harder on vocals and drums.

A long-locked Romeo, played by senior Andrew Stoltzfus, wears a muscle shirt with neon details. Stoltzfus has been involved with EMU productions of Shakespeare’s “Measure for Measure,” as Duke Vincentio, “Beauty and the Beast,” as the Beast, “Pride and Prejudice,” as Mr. Collins and Mr. Wickham, and “Shrek: The Musical,” as Lord Farquaad. Stoltzfus said he connects deeply with the show’s performance of “One” from U2’s “Rattle and Hum” during one of the final scenes in the musical.

“[The show] takes an unfiltered look into some of the terrible suffering and pain that is in the world. [Instead of shying] away from it, [the song and therefore the show] says life doesn’t have to be like this,” Stoltzfus said.

All the songs in the show are from across U2’s discography, including songs deep within albums from “War” to “The Joshua Tree” and beyond. The creators received special permission from U2 itself and Universal Music Group to use the music in the production.

“I like listening to [‘One’]. I think it’s very beautiful. I don’t sing in it. I’m there on the stage, dead. I think that song is very important for bringing home the message that we want to bring home. [The play] is not just this emotional roller coaster. [It conveys] the importance of reconciliation, of standing together, of acknowledging and accepting the hurts that happened, but not letting that control, not letting that be the end word,” Stoltzfus said.

Poole, who came up with the idea for the musical, said he was first exposed to U2 in high school. Later, when he was in college, Poole took part in a performance of “Two Gentleman of Verona” combined with the music of the Beatles, created by Mark Hallen.

Poole went to Holsopple, a longtime U2 fan who taught about the band in his class “Myths, Legends and Superstars,” and has had a documentary career spanning decades of international conflicts. Holsopple said he was eager to collaborate.

The two had collaborated before on a spring 2016 show, “Distant Witness: Social Media, the Arab Spring, and a Journalism Revolution,” a multimedia performance based on the eponymous book by Andy Carvin, a journalist who covered the Arab Spring.

“My documentary career was all spent going into war zones and places of violence trying to find ways to work at peace, so for me this is the perfect text mashing together. How much do you have to lose before we’re willing to work at making peace? I really care about how you bring people who aren’t the same together and how they find they aren’t as far apart as they thought they might’ve been,” Holsopple said.