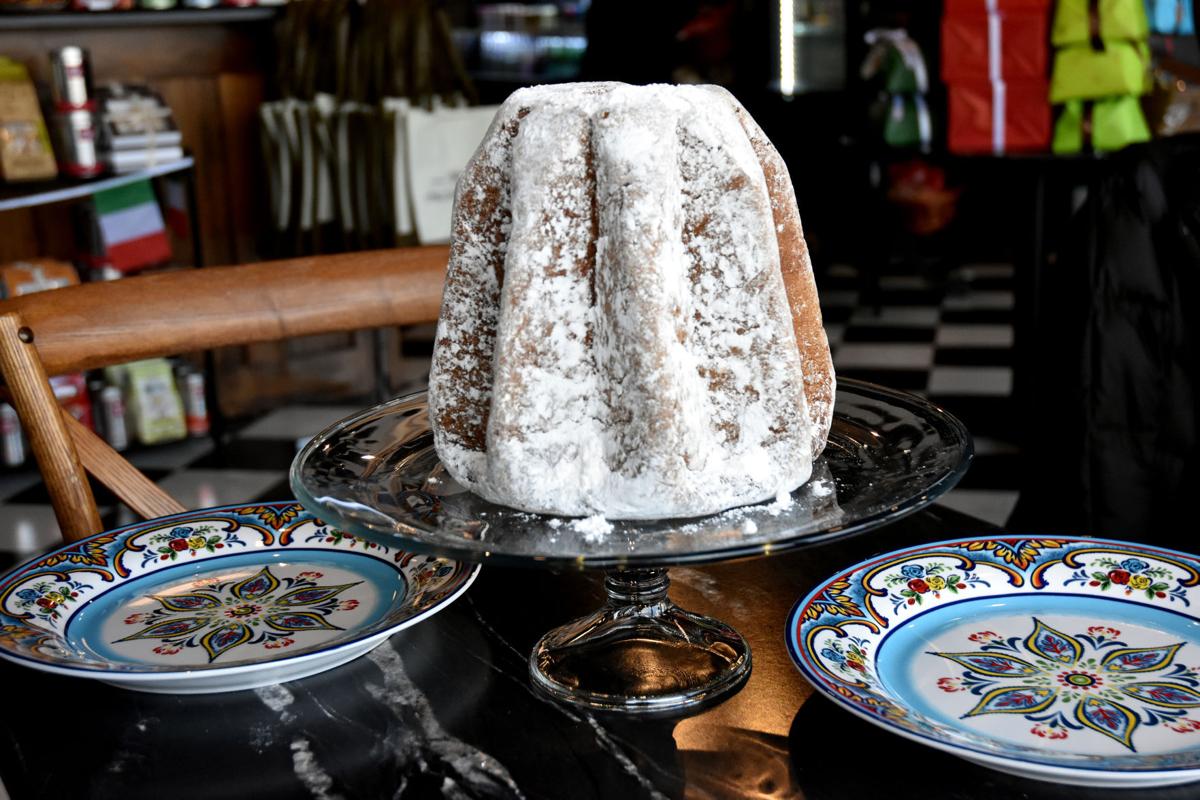 Panettone, an Italian sweet bread usually served around during the holiday season, sits read to eat at Vito's Italian Market. 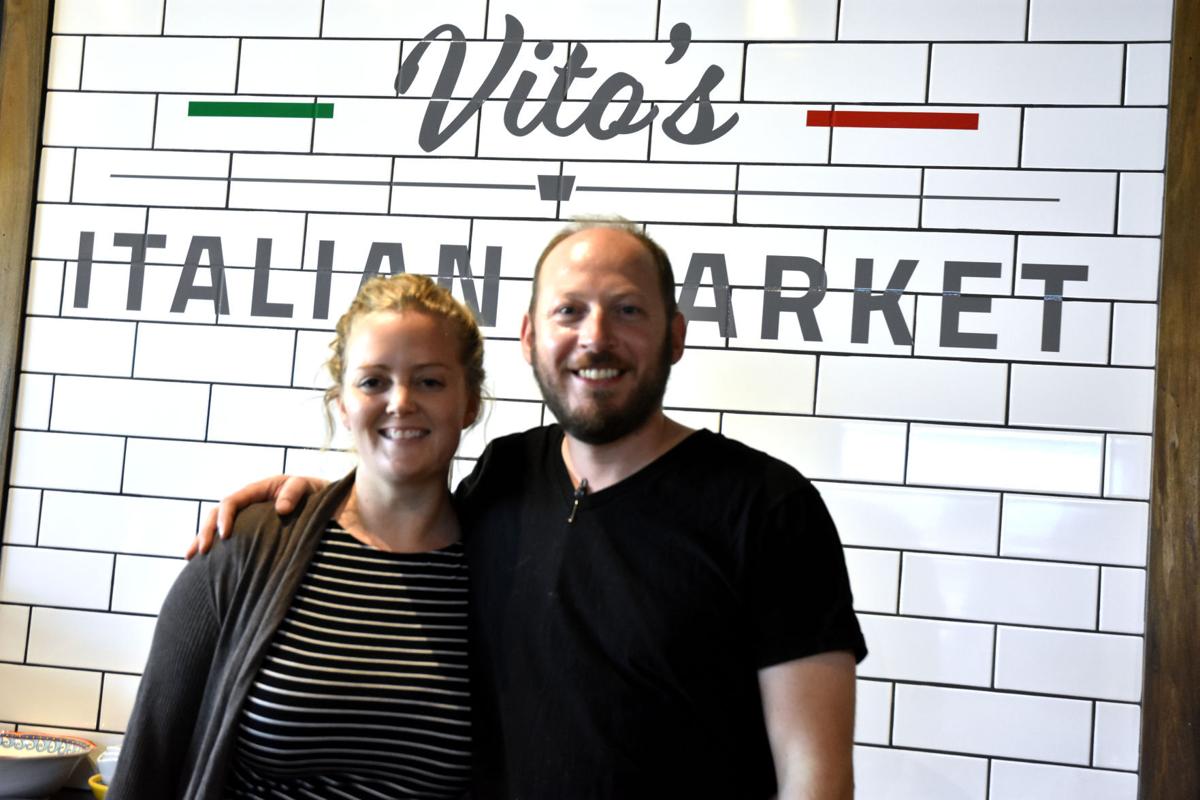 Vito's Italian Market owners Katharine Corgan, left, and Vito Pellerito pose in their soon-to-open store located next to their eatery off Port Republic Road in Harrisonburg. 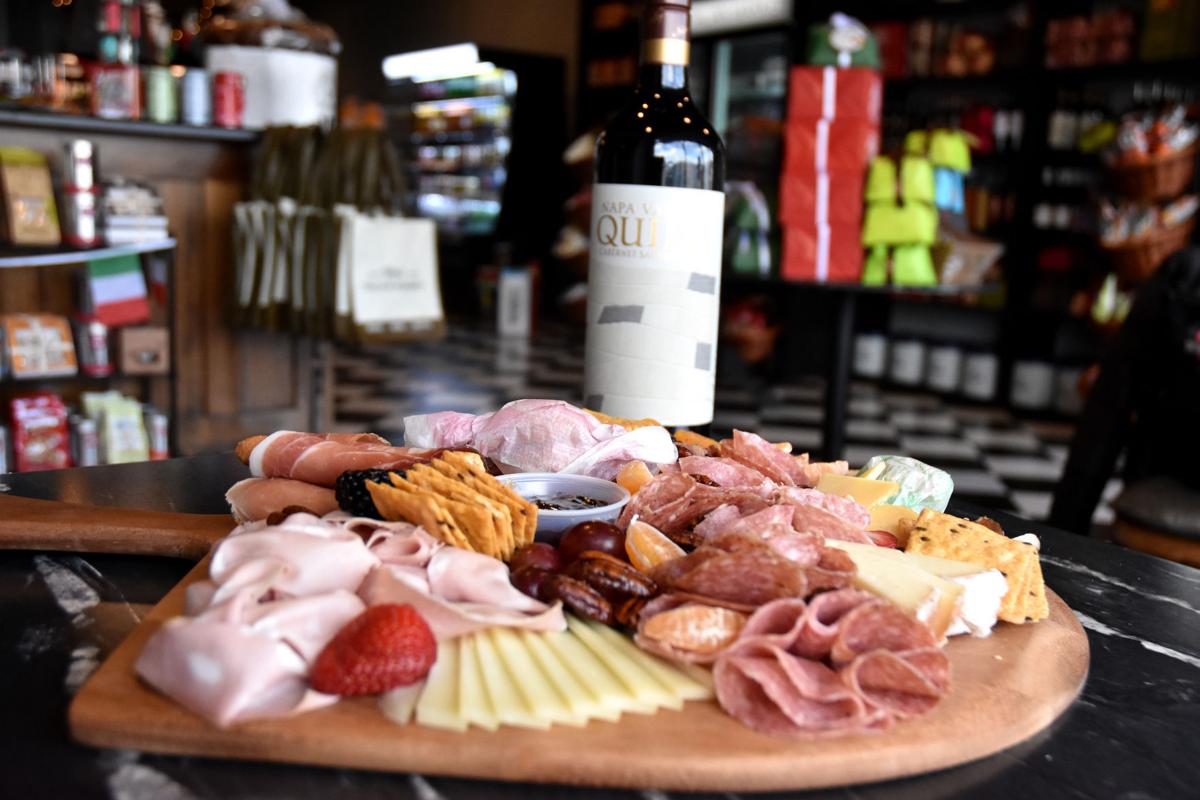 Need a charcuterie board? Vito's Italian Market offers plenty of cured meats, cheeses and wines to make that happen.

Panettone, an Italian sweet bread usually served around during the holiday season, sits read to eat at Vito's Italian Market.

Vito's Italian Market owners Katharine Corgan, left, and Vito Pellerito pose in their soon-to-open store located next to their eatery off Port Republic Road in Harrisonburg.

Need a charcuterie board? Vito's Italian Market offers plenty of cured meats, cheeses and wines to make that happen.

An Italian Christmas institution, panettone, or pandoro, are cakes usually purchased and brought to family gatherings throughout the season.

“I would say, this is really weird, [the panettone], it’s like a turkey," said Vito Pellerito, co-owner of Vito's Italian Kitchen and the new venture next door. "It’s like a tradition. You have to have turkey for Thanksgiving, and you have to have [panettone] for Christmastime."

Vito's Italian Market, the new venture by Sicilian-born Pellerito and his wife, Katharine Corgan, is opening right next door to the restaurant that’s been open for nearly 15 years off of Port Republic Road. The market will have a soft opening some time next week, once everything is ready, said Corgan. There will be a grand opening in the following weeks to mark the holiday season.

“We usually go to New York and we go to this Italian place and the guy who owns it is from my hometown," Pellerito said. "So it’s kind of like going home when you go to an Italian market, you see all the stuff that you grew up with. It was really nice for us to have that here and trying to [show] people these nice Italian goodies.”

Once the COVID-19 pandemic hit, the owners of Vito’s Italian Kitchen said their take-home pizza kits and take-home meals were very successful with customers, but the restaurant had no way to display or market them. Corgan said after the pandemic, it became clear the business should expand and open an Italian market as a hedge against uncertainty.

“Now we have a location to store that and advertise that in here,” Corgan said. “We just realized how much people want prepared meals. One of the big parts of this market will be the coolers that will be full of the Vito’s meals. People can take them home refrigerated and bake them when they want them.”

Plus, the couple said they want to offer Harrisonburg residents a taste of the classic Italian market experience. Offering prepackaged goods they say are perfect for gifting, an espresso bar, illy brand Italian coffee products, cold cases with take-home Vito’s Italian Kitchen meals, the market and espresso bar portion of the shop will be available for the soft opening.

Eventually, a deli and sandwich shop component of the market will open, offering all kinds of Italian cheeses, like mortadella with pistachios in it, ricotta salata, and meats, like capicola, salami and prosciutto di parma. It will also sell Italian sandwiches on “good” bread, Corgan said, adding that part of the business will come later after the soft opening. They’ll sell meats and cheeses by the pound and a marinated bar.

“There are like so many different type of cheeses that will be nice to introduce our customers to see and have an understanding. France is famous for the cheeses, but also Italy has so many different cheeses too,” Pellerito said.

Corgan also said the market, which connects by a door to VIto’s Italian Market private event room, may be used in the evenings for private events and wine tastings down the road.

For now, Pellerito and Corgan said they’re excited to open the store and have people buy Christmas gifts there.

The couple said the cakes they sell are much higher quality than the Christmas cake found in most grocery stores and their product is just like what is eaten in Italy. There will be a heavy use of tastings and samples, Corgan said, to educate people on their specialty products.

“Some people won’t have any idea why this is superior to the panettone you can buy across town and so I think it’d be important to let people try,” Corgan said. “We just want people to experience what Italian food and feast look like. It’s so fun. I think everyone should have that experience.”

Corgan, who took a quick break from preparing for opening, had just enough time to prepare a few red ceramic cups full of espresso and opened a pandoro cake to taste, which consists of unwrapping, and then dumping an enclosed packet of frosting sugar into the bagged cake and shaking to coat, like a wild blizzard in a snow globe.

Once it’s turned out from the bag onto a cake plate, the pandoro is a powdery white, sandcastle-shaped centerpiece that will upgrade any holiday table. For those who have tried panettone, pandoro is distinct, because it doesn’t have any fruit or nut fillings in it. The pastry, somewhere between cake and bread, is slightly sweet and also comes in savory varieties. It can be enjoyed spread with mascarpone cheese, Nutella hazelnut spread or simply enjoyed plain with a tiny espresso.

“It’s a gift that you bring when you go see family. It’s really a tradition in Italy. Especially kids, they’re looking to open the panettone, pandoro,” Pellerito said.

My wife was named for the annunciation. I hope they keep their prices down - you bet we will be there.