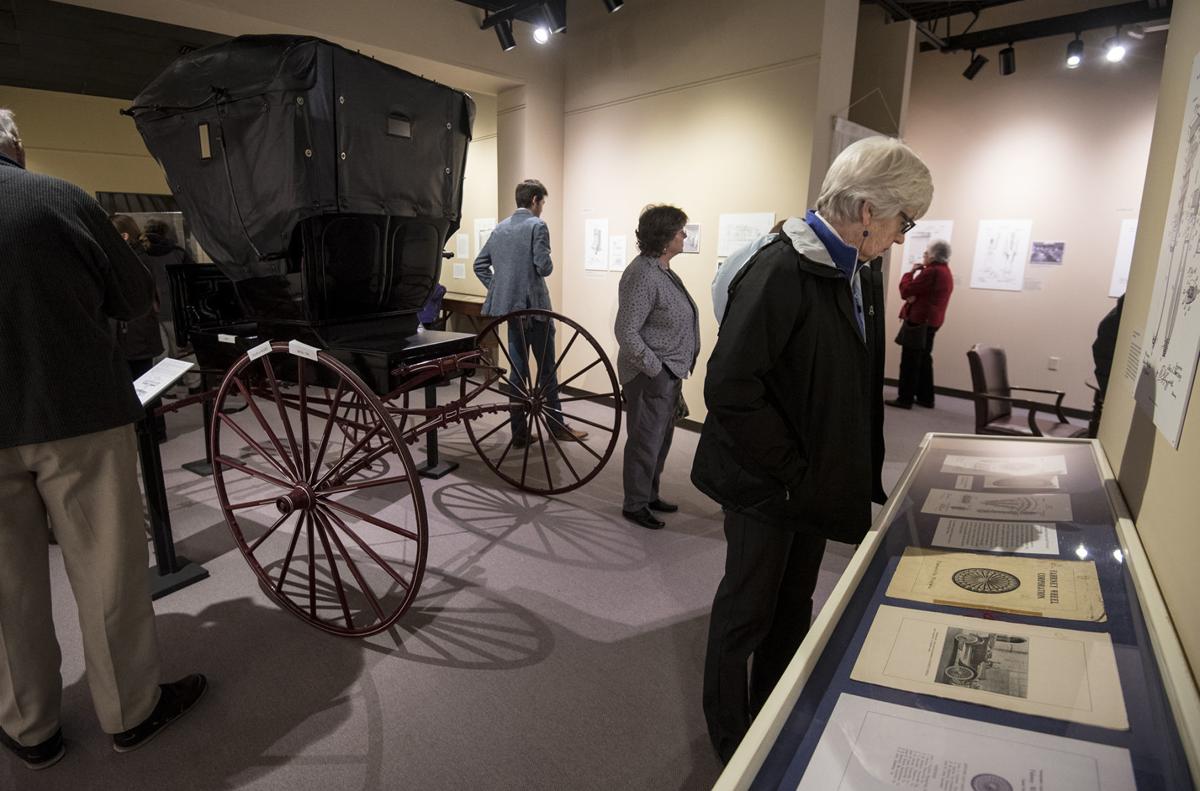 Guests look through a new exhibit entitled “Inventors and Innovators of Harrisonburg and Rockingham” at the Harrisonburg-Rockingham Historical Society’s Heritage Museum on Wednesday. 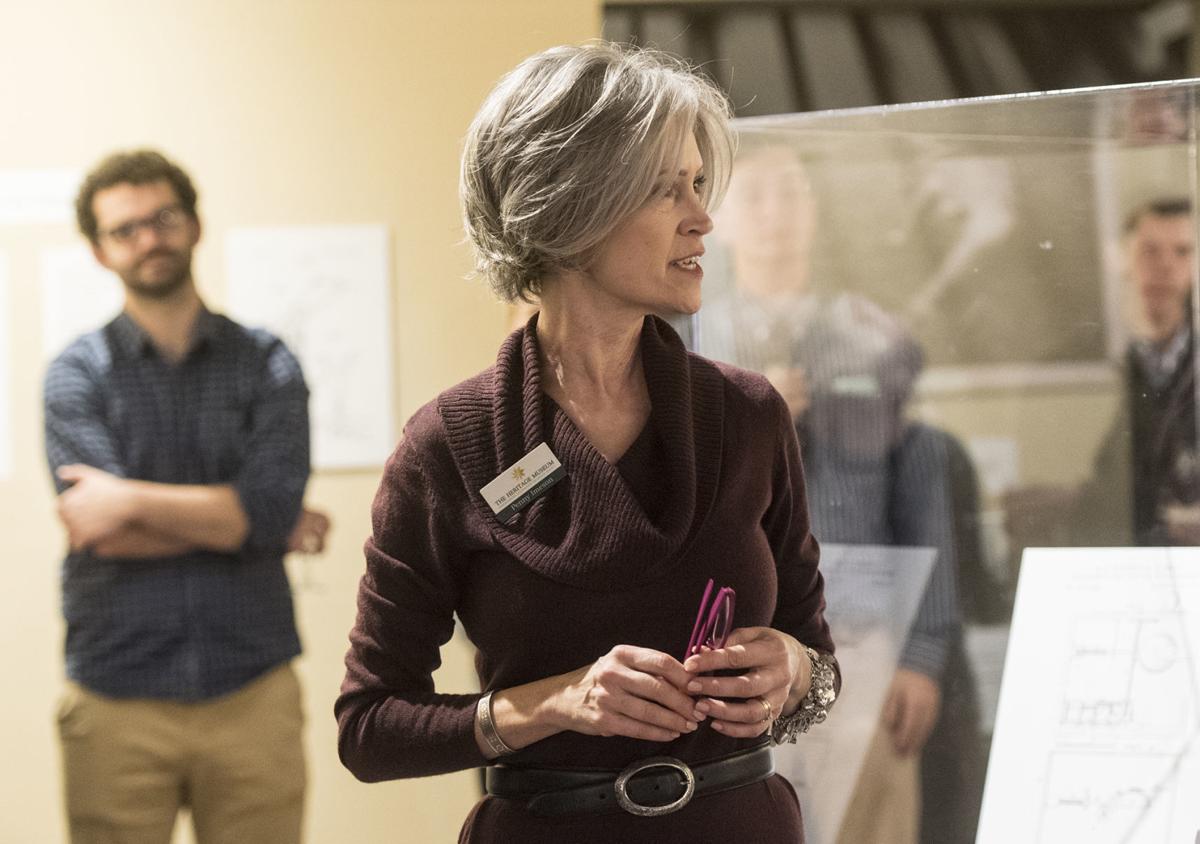 Penny Imeson, executive director of the Heritage Museum, speaks Wednesday during a reception for the new exhibit. 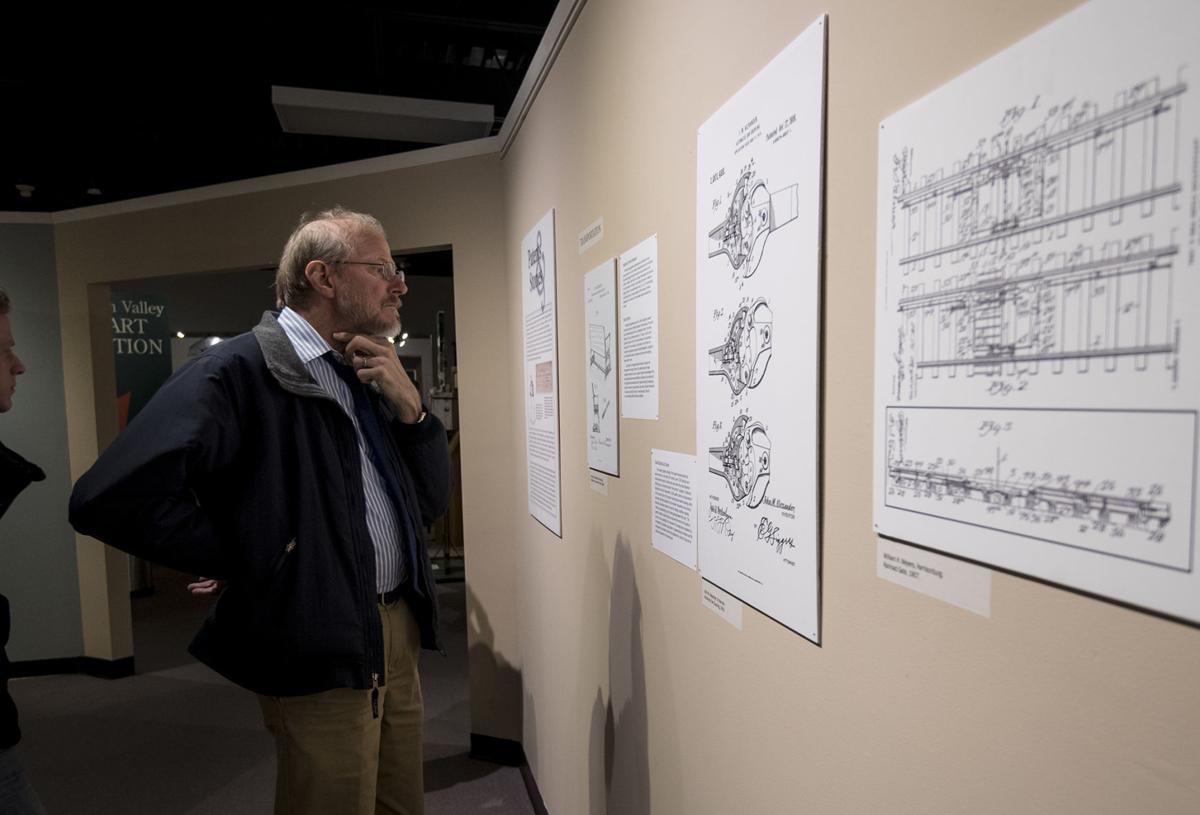 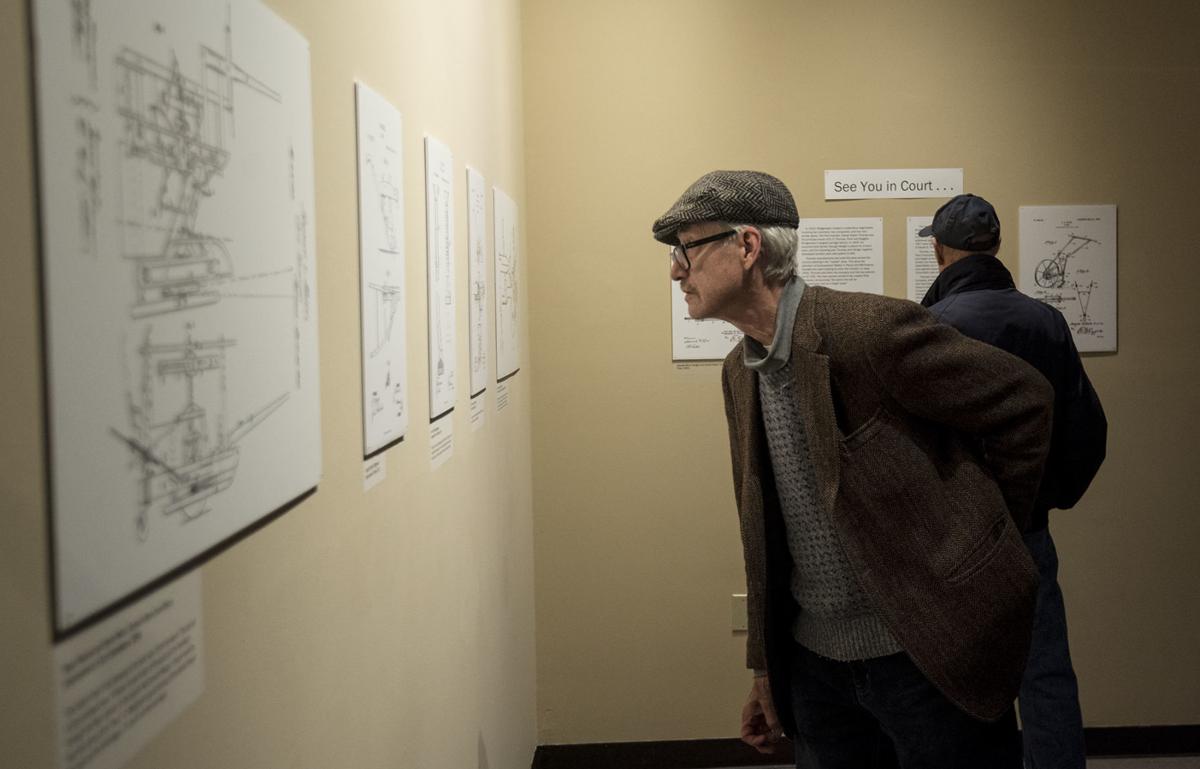 Guests look through a new exhibit entitled “Inventors and Innovators of Harrisonburg and Rockingham” at the Harrisonburg-Rockingham Historical Society’s Heritage Museum on Wednesday.

Penny Imeson, executive director of the Heritage Museum, speaks Wednesday during a reception for the new exhibit.

DAYTON — From 1838 to 1974, 380 patents were filed by people living in Harrisonburg and Rockingham County.

Kevin Borg, a history professor at James Madison University, combed through the documents submitted to the U.S. Patent and Trademark Office available on Google Patents and selected 50 of them to showcase in an exhibit at the Heritage Museum of the Harrisonburg-Rockingham Historical Society.

The exhibit, called “Inventors and Innovators of Harrisonburg and Rockingham,” features mechanical drawings of the patents that Borg and his daughter digitally enhanced and enlarged to hang on the walls of the exhibit, accompanied with photos, documents and biographical information Borg was able to dig up on the people who applied for the patents.

“Every patent tells a story,” Borg told a crowd gathered at the opening reception of the exhibit on Wednesday. Borg said the patents are “windows into community history and the problems of their time.”

“We’ve had other people come in and help us do exhibits, but we’ve started this new guest curated exhibition schedule [every] November and April,” said Penny Imeson, executive director of the Heritage Museum.

The patents are divided by various industries: agriculture, commerce, medical and household items. On some occasions, Borg was able to connect with descendants of inventors, who helped contribute materials for the exhibit.

Borg dubbed a Harrisonburg inventor named Perry Stover Martin “The Edison of the Shenandoah Valley.” He applied for 47 patents in his lifetime.

“That’s quadruple the number of the next larger number of patents in the county,” he said. “He had more patents before he was 21 than Thomas Edison had. He continued to have patents in the application file after he was 70 years old.”

He filed his first patent at 19 years old when he was working for a company in Harrisonburg that manufactured chicken egg incubators. Most of Martin’s patents involve poultry brooding and poultry incubate.

According to Borg, Martin’s inventions are the untold story of the poultry industry in the Shenandoah Valley.

Borg purposely wanted to highlight local inventors as opposed to names that are widely known.

“The thing about this exhibit is that I don’t have famous people in here, because I didn’t want famous people in here. I don’t want Edison. What I want is for this to be a way for communities to talk to each other and find those hidden stories,” he said. “All of the poultry history in Harrisonburg and Rockingham County has ignored Perry Martin’s contributions. All it took was a project from a different angle, looking at patents.”

Not all of the local inventors found success in their products. John Fahrney, who lived in Timberville, was a prolific inventor who had a range of ideas from the late 19th century through the early 20th century, Borg said. He was a blacksmith who was challenged with transitioning to a society that was increasingly relying on automobiles.

“This is a patent in 1900 where it’s just about him doing wrenches and then you see by 1917, he’s adopting the automobile as something he’s interested in,” Borg said. “He’s made a water pump device where you jack the back wheel up, put a pulley on the back wheel and you use it to pump water on your farm.”

Fahrney also patented a wheel with springs inside that was intended to absorb shock like a rubber tire without flattening or blowing out. Borg found that Fahrney was able to convince people to invest in his Fahrney Wheel Corp. to manufacture the spring wheels.

“It’s one of those cases where you go, ‘OK, he’s an inventor who got it wrong and yet it looked like a really good idea, and he spent a lot of time on it and other people believed in him and it didn’t work out so well,’” he said.

John T. Helbert, of Broadway, patented a human trap in 1932 to catch chicken thieves. The description in the patent says the jaw trap is “to be placed outside a chicken yard or near the hen roost covered with loose dirt and straw.” It says “the more the victim struggles, the closer the jaws move.”

“He’s evidently having trouble with chicken thieves — the Great Depression setting in — and he builds this trap and this trap gets manufactured, and it turns out there’s a guy who has one in his collection still, so I got a photograph of it,” Borg said.

Samuel H. Moffett, of Harrisonburg, created a device in the late 19th century that collected tax from alcoholic drinks purchased at bars. A bartender would bolt the device to the bar table, and every time beer or liquor was sold, they’d ring the bell and the device would tally up the drinks.

The revenue officer would then retrieve the ledger that kept records of each person who bought a drink, how many drinks they had and the tax collected from them.

“So, I did the numbers. This is from a bar at Spotswood Hotel in 1878 that was selling 36,000 drinks when the population was only 29,000,” Borg said. “And that’s just one bar. This really tells you something about Harrisonburg in the late 19th century — they drank a lot of alcohol.”

After surveying “Inventors and Innovators,” it becomes apparent there are groups of people largely missing or underrepresented. There are few women and no African-American patent-holders in the exhibit.

A section of “Inventors and Innovators” titled “Who’s Not Here” addresses this. Text on the wall states, “Innovation is a universal human ability, but securing patent protection for it is a process that has long skewed in favor of some more than others. Patent applications did not record sex or race. So we are left with the difficult task of ferreting out such data in other ways.”

Henrietta Daingerfield, who was born in 1844 to a wealthy family that owned the Hilltop plantation in Harrisonburg, is one of the women inventors featured in the exhibit. She patented an adjustable and reversible foot rest.

Daingerfield was a frequent railway traveler and decided to create a new foot rest because she thought the uncomfortable seating design did not take women’s and children’s bodies into account.

The exhibit notes, “Yet, patents are not the sole measure of innovation.” Borg said there were successful female and black entrepreneurs in the Shenandoah Valley who never filed a patent.

William Peters was a freed black entrepreneur in Rockingham County during the antebellum period who ran a successful saddle-making business, a blacksmith shop and livery.

Ambrose Phillips, whose father was a slave and mother a white woman, was a recognized woodworker and artisan in the late 19th century. The exhibit says, “such activities would be expected to generate regular patterns of innovative problem solving.”

But Borg says there’s more work to be done in uncovering the stories of women and minority innovators in the Valley.

The exhibit also observes how the inventions that are patented today are vastly different from the peak era of patents from the late 19th century through the 20th century because of the technological advances of today.

“It’s digital; it’s chemical; it’s biological; it’s genetic,” Borg said. “The kind of mechanical representation of the world is not as prominent in patents anymore.”

“Inventors and Innovators” will be on display at the Heritage Museum, located at 382 High St., until the end of March. A new exhibit begins in April.

Imeson said that the more we can learn about how people lived in the past, the issues that affected them and the decisions they made, the more we can understand the modern world. She believes Borg’s work has uncovered a part of the community’s history that was largely unknown.

“I’m not sure anybody realizes the ingenuity that has come out of the community,” Imeson said. “I feel like this is a hidden history that’s been revealed.”