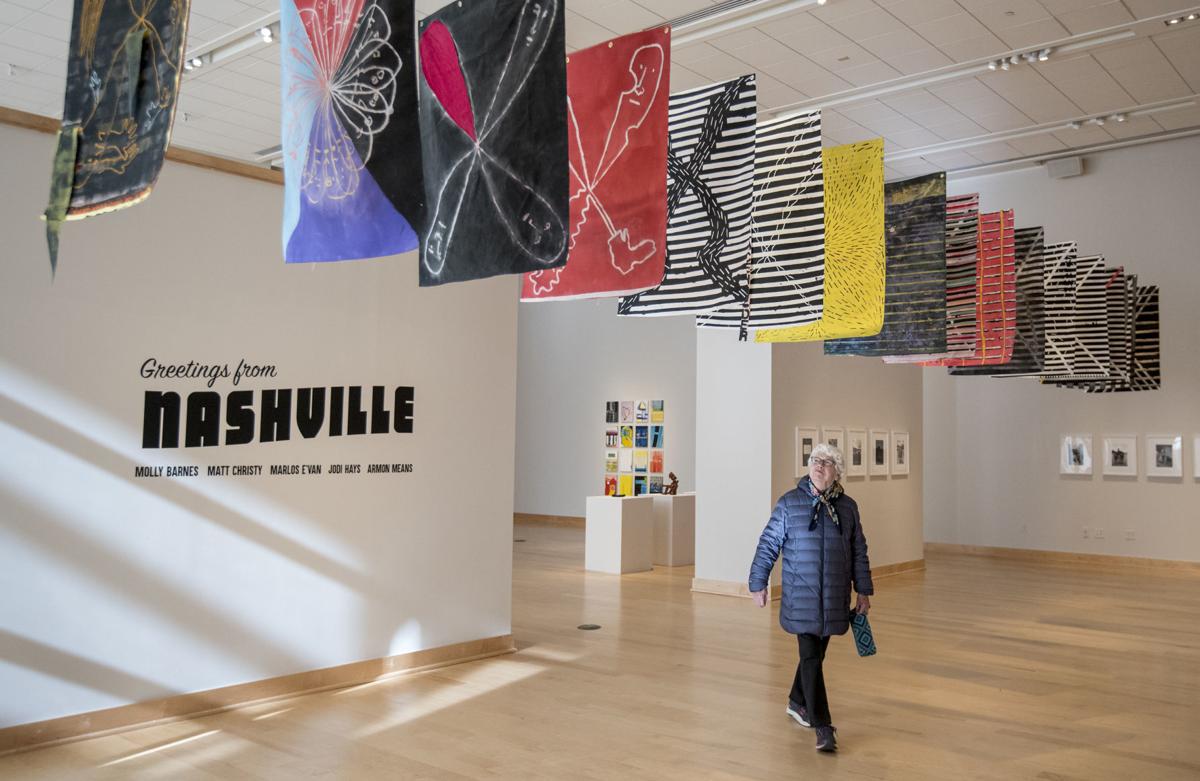 Marilyn Turner of Harrisonburg walks through the “Greetings From Nashville” exhibition at the Duke Hall Gallery. 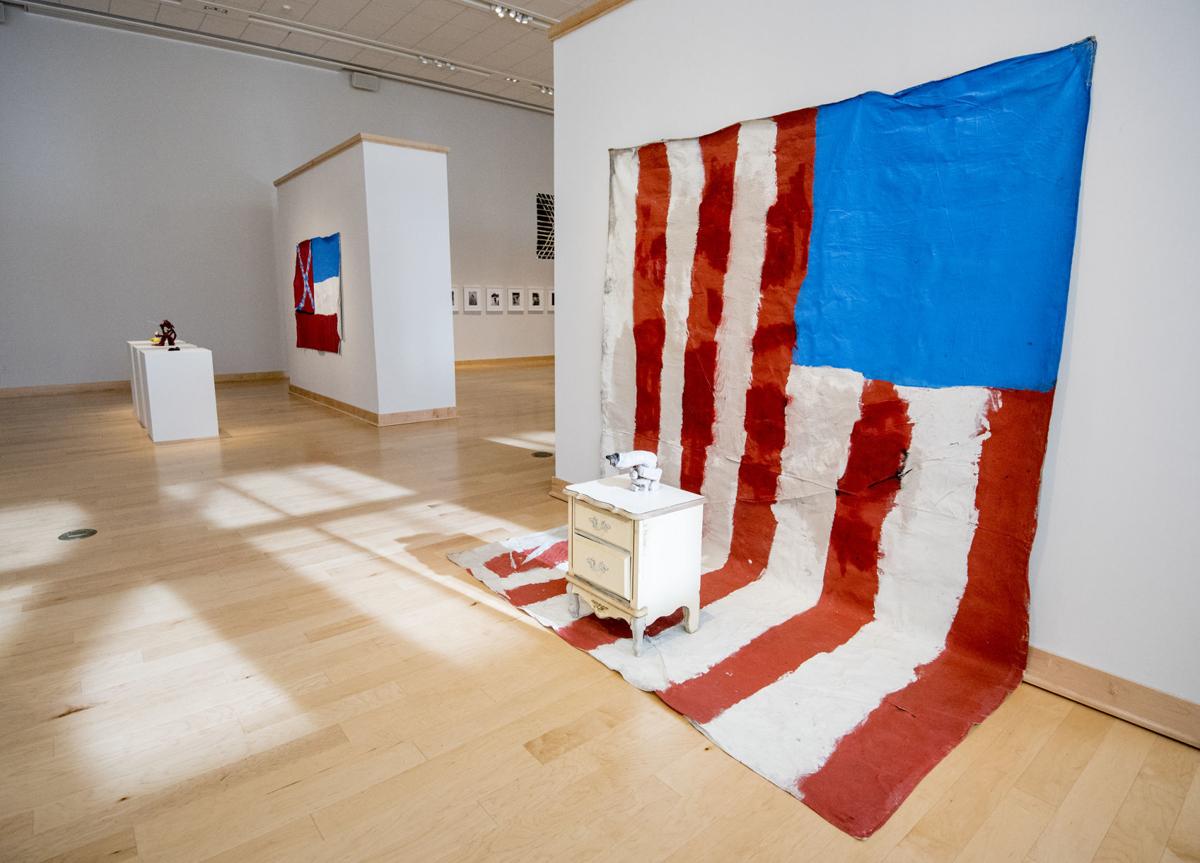 Pieces from Marlos E’van sit on display in the “Greetings From Nashville” exhibit.

Marilyn Turner of Harrisonburg walks through the “Greetings From Nashville” exhibition at the Duke Hall Gallery.

Pieces from Marlos E’van sit on display in the “Greetings From Nashville” exhibit.

HARRISONBURG — James Madison University’s Duke Hall Gallery has brought together five artists from Nashville, Tenn., one of the fastest growing U.S. cities according to Forbes, showcasing their work centered on community building and social awareness.

The exhibit, “Greetings From Nashville,” “takes a look at what it means to be an artist in a growing city,” a press release says. “Not only when it is advantageous to move to a growing city, but when a creative acts as a visionary on behalf of the larger community to build a better community for all.”

“The artists, in different ways, are trying to grapple with how they can serve the changing community or how they can envision a better community out of this,” said Indigo Guyer, 20, a junior and Duke Hall Gallery assistant.

Danielle Heckman, 25, a graduate student and Duke Hall Gallery assistant, said the five artists were chosen to represent a diverse set of backgrounds.

Viewers are greeted by a row of flags hanging from the ceiling. The flags, painted with acrylic and tempera on stitched fabric, are the work of Christy, an artist, writer and educator. Christy holds a bachelor’s degree from Watkins College of Art and Design and a master’s from the University of Oregon. He is the recipient of the Frank Okada Scholarship and a Graduate School Research Award.

His subjects include men and women, adults and children, standing in various locations, from a gas station to a parking lot or a backyard. Two of the frames are black with the words “Portrait Refused.”

Guyer said the collection of photographs touches on contemporary family and community structures.

“It explains the need to change locations in the U.S. through migration, immigration, social change, or even the road trip relates with modern America and everyone’s relation to one another in communities,” she said.

E’van, the co-founder of McGruder Social Practice Artist Residency in Nashville, has three painted ceramic sculptures in the exhibit, “Bannannas,” “Naked Pray,” and “Tha Gun #2”, that are displayed in front of the Mississippi state flag, the state where E’van was born.

Adjacent is an American flag painted with latex and oil on canvas E’van titled “American Gothic.” An unfired clay sculpture of a hand holding a gun sits on top of an old nightstand.

“It communicates how the American dream has morphed and what it is and how it affects future generations who inherit our societies,” Guyer said.

E’van’s work often touches on social, political and economic issues in America, including racism and violence. He holds a bachelor’s from Watkins College of Art.

“Greetings From Nashville” features a series of gold quilts and cyanotypes on watercolor paper by Barnes, a graduate of Mississippi State University and the School of the Art Institute of Chicago.

“Molly Barnes focuses on everyday domesticity, which I interpreted as a sort of nostalgia for a past that we have in childhood but that’s distinct from the larger community as a whole,” Guyer said.

Hays, an artist and curator, is showing a panel of 16 brightly painted canvases featuring various shapes and lines. Another four-panel piece, called “Entry,” is made with ink and gouache on Fabriano paper.

“Jodi Hays is more interested in the language of space, like abstraction, how different images of grids or fences can communicate exclusivity or inclusivity,” she said. “She’s interested in referential abstraction.”

Hays was the assistant director at the Cambridge Art Association before running Dadu, a studio and pop-up gallery, and co-founding Coop Gallery. She received degrees from the University of Tennessee and Vermont College of Fine Art, and teaches in the graduate program at Watkins College of Art.

Guyer said Harrisonburg residents could learn a thing or two from a city like Nashville when it comes to community building.

“I think so, considering we have a fast-growing community of immigrants, especially,” she said.

What Heckman took from “Greetings From Nashville” is that “communities really work best when they’re in conversation.”

“The idea of bringing different communities together in different ways to create discourse is one of [gallery director] John Ros’ main goals of this gallery,” she said. “Not just this exhibition, but the gallery as a whole. We’re trying to do a lot of community outreach.”

The gallery will host a panel discussion in Duke Hall Room 2036 on Jan. 28 from noon to 1 p.m. that will feature Ros as the moderator and Hays, JMU fiber arts professor Rob Mertens, Katie Mills of the Pop-Up Art Collective and Jon Henry of Old Furnace Artist Residency.

“Greetings From Nashville” will be on display in the gallery until Feb. 23.