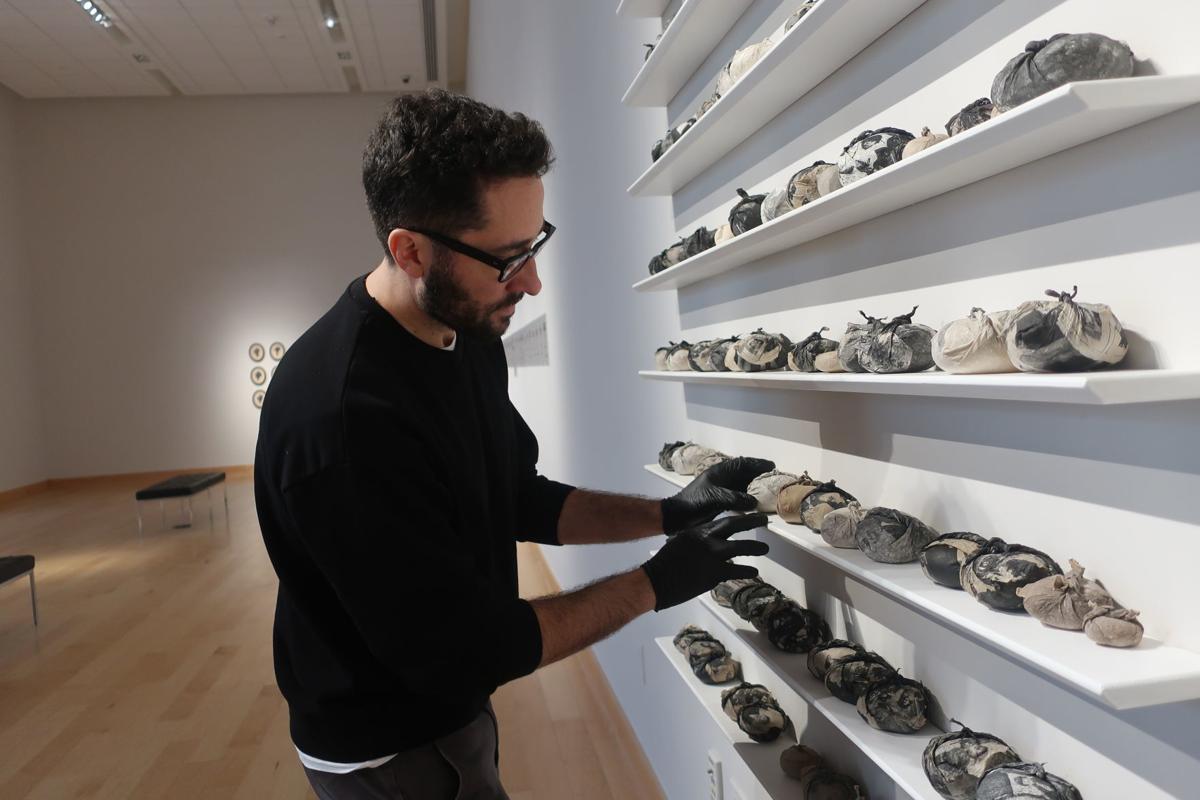 John Ros, director and chief curator of Duke Hall Gallery, arranges the furoshiki bundles, a Japanese style of packaging, of Emma Nishimura’s “An Archive of Rememory” in the gallery’s “Record Keepers” exhibit on Wednesday. 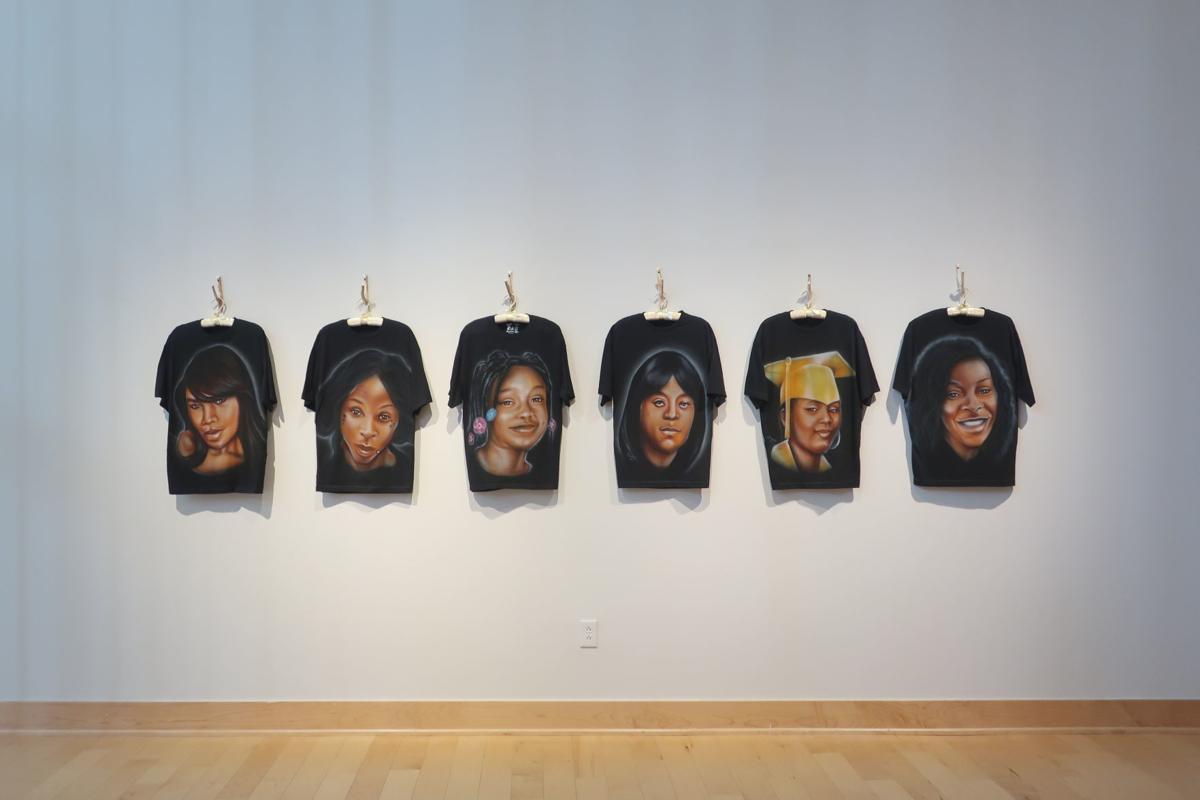 New York artist Azikiwe Mohammed air-brushed T-shirts with the faces of unarmed black women who were killed by police or died while in custody.

John Ros, director and chief curator of Duke Hall Gallery, arranges the furoshiki bundles, a Japanese style of packaging, of Emma Nishimura’s “An Archive of Rememory” in the gallery’s “Record Keepers” exhibit on Wednesday.

New York artist Azikiwe Mohammed air-brushed T-shirts with the faces of unarmed black women who were killed by police or died while in custody.

The group exhibition at Duke Hall Gallery, located at 820 S. Main St. on the James Madison University campus, is on display until Dec. 1.

The exhibit opens with two historical pieces by renowned artists Francisco Goya and Robert Rauschenberg that are on loan from private collectors in New York. Goya’s “Caprichio No. 24: Nohubo Remedio” depicts a woman wearing a dunce cap and riding a donkey through a crowd of angry men in what is meant to be a public shaming. Goya, at the time in 1868, was providing commentary on the Spanish social classes.

Rauschenberg’s “Ship Captain Faces Charge in Oil Spill,” part of the “Peace Portfolio,” gets its name from a newspaper headline in the work. The artist combines newspaper clippings and photography from the 1970s into a collage that describes the political climate of the era, which included protests, counterculture and oil.

“These two pieces are giving historical context to give a sense of how artists in the past have used prints and multiples to talk about political issues,” Ros said.

The viewer then moves to a trio of lithographs by Brooklyn, N.Y., artist Alix Lambert called “Courtroom Prints.” Lambert sat in court rooms in Kings County and essentially became a courtroom sketch artist, drawing the people in the room and writing down important bits of information she heard. In “Witness,” Lambert uses the Supreme Court of Kings County’s logo and seals to make the prints look like official documents.

“She’s becoming her own witness within this space and remarking on some of the things that are being said within the space,” Ros said.

To the right on the adjacent wall is six black T-shirts that New York artist Azikiwe Mohammed airbrushed with faces of black women who were shot and killed by police officers or died while in custody.

The first names of Meagan Hockaday, Mya Hall, Aiyana Jones, Alexia Christian, Tanisha Anderson and most famously, Sandra Bland, are written in gold and the T-shirts are placed on hangers that look like tree limbs, representative of lynching.

Mohammed chose to airbrush the faces on T-shirts because clothing can be replicated by silkscreening and also because T-shirts memorialize people, places and events and can be used to spread messages.

“He’s thinking about fashion and how fashion remarks to political ideas and maybe more abstractly, how clothing is reproducible and you can make multiples of it,” Ros said. “[T-shirts] become this archive of themselves.”

In the center of the exhibit is two glass display cases containing Cuban-American artist Aurora De Armendi’s “Libro de las Preguntas,” or “A Book of Questions,” which tells the artist’s personal history as a child refugee in Guantanamo Bay in the 1990s.

The work also documents the events that took place at the time through interviews with Cubans, Haitian Creoles and American workers, along with collected materials, including newsletters written by Guantanamo refugees.

“Because [she was] a young girl when she was there in the ‘90s, she has a lot of missing memories about what it was like to be there. ... So, she’s looking to these different populations that were there to piece together her memory,” Ros said.

Next to the newsletters is a book and an assortment of family photos in Cuba. Armenti printed the questions she asked the different people she spoke to in the “Book of Questions” in Spanish, Haitian Creole and English.

“Here, Aurora is creating her own archive and then using this material to then create her artwork,” he said.

Out of the 144 he’s printed, six are featured in the “Record Keepers” exhibit.

Photographer Elizabeth Moran, of Brooklyn, N.Y., collected screenshots of every goodbye email sent from her coworkers at an advertising firm from April 2009 to July 2011, a time period in which many workplaces suffered lay-offs due to the recession.

The screenshots were scaled to appear as she would have viewed the emails on her computer screen. Moran then shared the PDF files with Ros, who printed the digital files off the gallery’s printer.

Moran blacked out the email addresses and other personal identifying information, just keeping the coworker’s first name. The prints are arranged in chronological order, ending with Moran’s own farewell email from her last day.

“This story talks to the Great Recession, it talks to office culture, it talks to this idea of archiving as a photographer who’s taking pictures of her screen and putting them in a folder and keeping these stories alive,” Ros said. “It’s interesting to see some of them are funny and cute and some of them are jovial. Some of them you can read between the lines; they’re a little harsher.”

Next to the printed emails is a set of shelves dedicated to Japanese-Canadian artist Emma Nishimura’s project “An Archive of Rememory.” Canada, like the U.S., held Japanese immigrants in internment camps during World War II.

Many of Nishimura’s family members were interned during that time, so she used photo-intaglio and sculptural paper-making techniques to create hollow bundles using the traditional Japanese form of packaging called furoshiki.

Printed on the outside of the bundles are portraits of family members and others she interviewed. There are 300 of them placed on the shelves, Ros said. The bundles are hollow because the memories are meant to symbolically fill the inside.

“Each of these, as hollow as they are, hold all this weight and all this history with these individual one-on-one conversations that she’s having with these people,” he said. “She’s piecing together that history and trying to tell that history through these pieces and the stories.”

The viewer is meant to see two of Jo Baer’s artwork last. Baer, known for her minimalist work in the 1960s, now creates artwork by adding layers both physically and digitally in the form of a collage. Ros called her process “hybridity.”

Baer, who lives in Amsterdam and is now in her 80s, titled the work “In the Giclée-ed Land of the Giants.”

Charlie Levine, a visiting independent curator from the United Kingdom, focuses on archival modes of display and archival art collections. She gave several talks to JMU students to coincide with the “Record Keepers” exhibit.

“I love the show,” Levine said. “I’m such a big fan of print and I think print is a really beautiful way of creating contemporary archives. It feels like such a traditional method of making and then in this exhibition, all the works are very contemporary. I really like that it’s an archival medium, but really contemporary.”