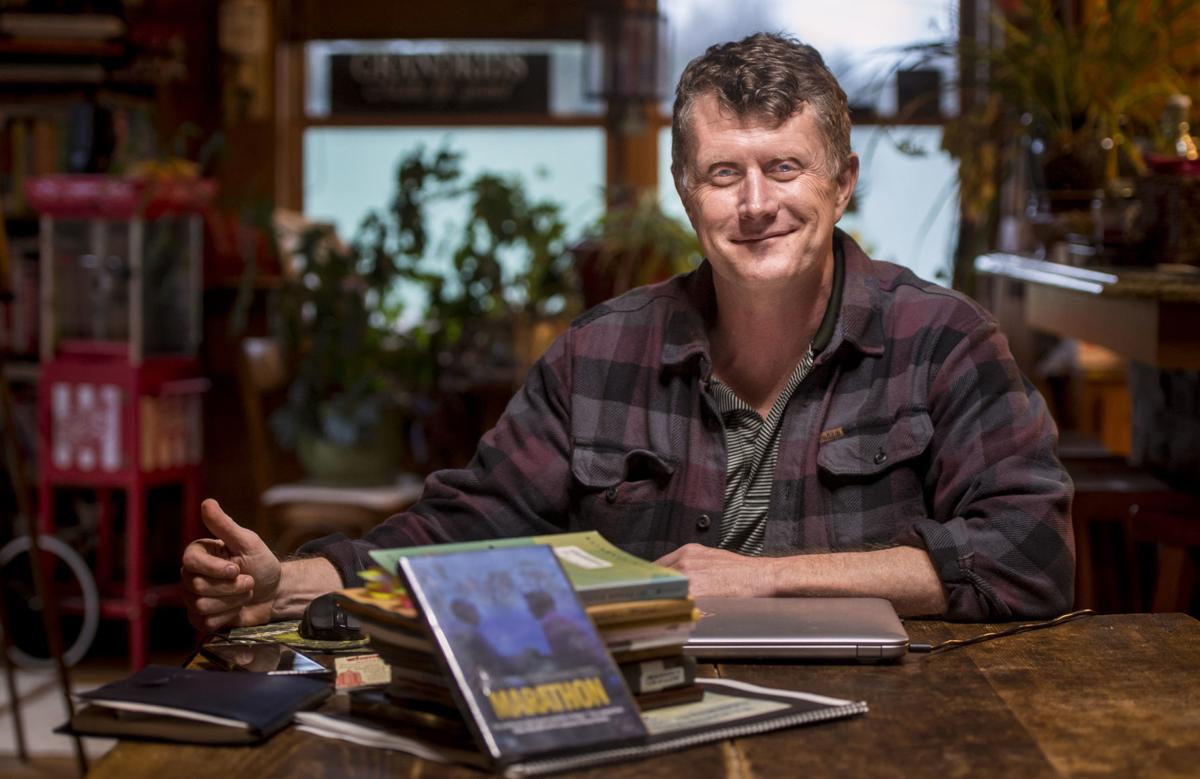 McGaheysville author J. Scott Price poses for a photo in the kitchen of his parents’ home. 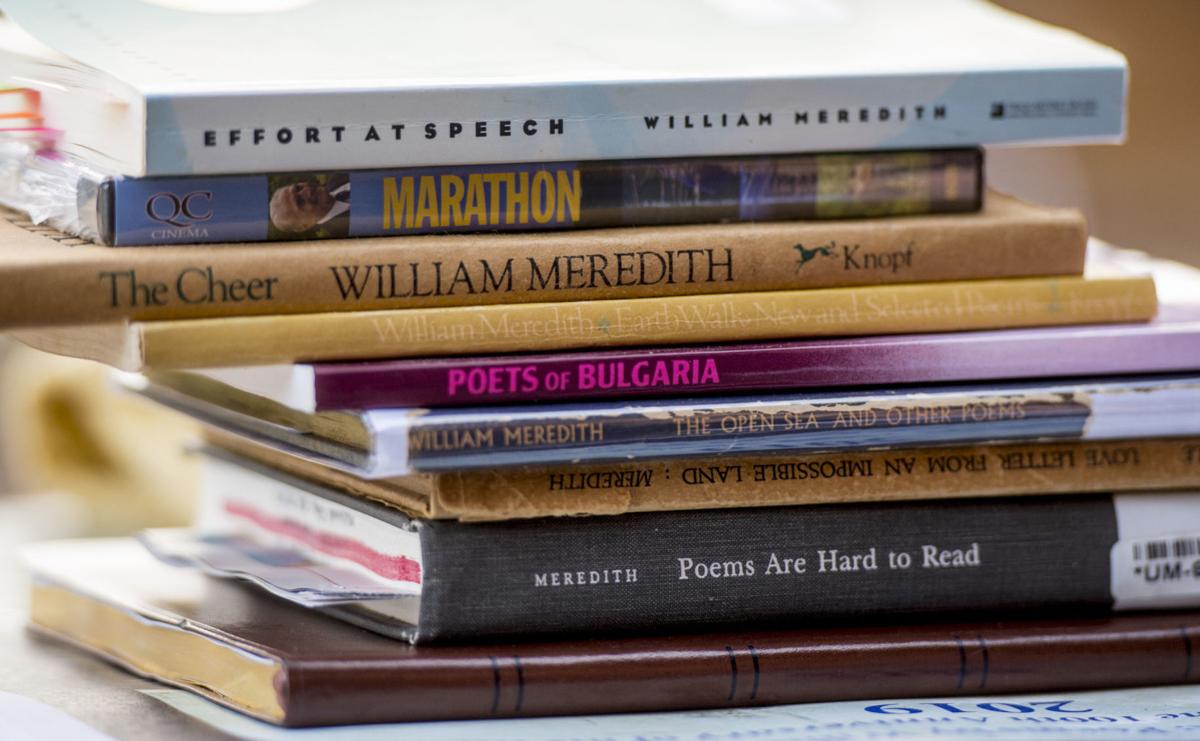 McGaheysville author J. Scott Price poses for a photo in the kitchen of his parents’ home.

McGaheysville poet J. Scott Price dedicated his youth to pursuing a lifetime of military service, saw that dream go down the drain from a back injury and turned to writing after his discharge.

Today, he is finishing a manuscript of his poetry and collecting information as the official biographer of Pulitzer Prize and National Book Award winning poet William Meredith.

Had you asked Price about Meredith two years ago, he would have given you a blank stare. Truth is, it was per the recommendation of his collegiate adviser to research Meredith, whose life met at the intersection of two topics that fascinated Price: literary lineage and World War II poets. Meredith, who died in 2007, was a veteran who studied under Robert Frost.

Shortly after the conversation with his adviser, Price popped into a used book shop and discovered a copy of Meredith’s work. Price said he was enthralled by the poet and eager to connect the various obscure details of Meredith’s life that have been overlooked and overshadowed by his fame.

“As I was doing the research, I really sort of found that I liked discovering things that haven’t been talked about yet that deserve to be talked about,” Price said. “Here’s a gay guy in World War II in Korea. … Navy medical records say he suffered a gunshot wound that nobody’s talked about … and why did the FBI have a file on him?”

Sometimes passions are planned and pursued, but in the case of Price, poetry was the silver lining on the death of his lifelong aspiration. Price came from a long line of military family and said he had intended to serve for as long as he was able.

“Then, I left right as I was getting out and getting divorced at the same time, and I became that stereotypical guy like every veteran worst-case scenario stereotype you can come up with — that’s what I was living,” Price said.

One month after his 17th birthday in 1986, Price enlisted in the Virginia Army National Guard. For his undergraduate degree, Price attended Virginia Military Institute and graduated as a major. In 1995, he attended Army Officer Candidate School and served two deployments in Afghanistan as a captain before sustaining a back injury in 2008 that forced him to discharge in 2011.

Poetry had flittered to and fro in his mind throughout his service, but it was not until he was discharged that Price decided to invest in his art at a Washington, D.C., veterans’ writing project in 2012. From there, Price joined the Furious Flower Poetry Center at James Madison University and was awarded first prize on a regional level at the National Veterans Creative Arts Festival in 2015.

“Poetry has been something that’s sort of always happened to me, but I didn’t want to admit it. Especially when I was in the military. … There was no way as a leader I was going to let my soldiers know,” Price said. “Then, when I got out of the military, it sort of kept like tapping me on the shoulder.”

Twenty-five years after graduating from VMI, Price enrolled at Vermont College of Fine Arts to study writing poetry and publishing. To finish his graduate thesis on Meredith, Price reached out to The William Meredith Foundation and gained access to archives at the Connecticut College, where Meredith taught and there remains a collection of letters by Meredith. There, Price met poet and president of the foundation, Richard Harteis, who was Meredith’s partner until death.

“He came out of the blue but has become a friend. … He’s had his challenges as a person and come through them all,” Harteis said. “At this point in William’s legacy, it’s time to have such a biography, so Scott is the official biographer. I’m making everything available to him.”

Last April, Price’s collegiate thesis was published in “FESTSCHRIFT FOR WILLIAM,” for the Centennial Celebration of William Meredith. This month, Price is taking up residency at the Virginia Center for the Creative Arts to delve further into his studies of Meredith.

When Price is not hunkered down with research inside archival libraries or tucked away at artist residencies, he volunteers in community service — a trait he chalks up to residual evidence of his military career.

“In the military … people have a sense of purpose. So when you get out and there is no new purpose, a lot of potential problems can unfold. So ... I sort of had to find those new purposes,” Price said.

In support of fellow veterans adjusting to civilian life, Price works with War Paints, Breaking Free and the local Wounded Warrior Project chapter. On a more creative front, Price is a past-president of a capella group Harrisonburg Harmonizers and former associate of the Harrisonburg-Rockingham County edition of Hometown Value Magazine.

Price has won awards for his contributions to the area, namely Ambassador of the Year. Harrisonburg-Rockingham Chamber of Commerce is composed of five staffers, nearly 800 members and up to 15 ambassadors each year. Frank Tamberrino, president and CEO of the chamber, recognized Price with the Ambassador of the Year plaque at the 2018 annual banquet and award ceremony for his dedication and dependability.

“When he jumped in, he jumped in with both feet,” Tamberrino said. “Scott really came to a lot of functions. He was making a lot of contacts around the community. … That’s one of the benefits, but he was just one that sort of embodied what we look for in a good volunteer.”

Martha Woodroof, a Singers Glenn author and former host on WMRA, interviewed Price in 2016 for a radio episode. She said Price’s facility of language lent to a highly valuable experience that adjusted her perception on military personnel, so she could understand the common thread of humanity through inner strife.

“I’m an old hippy peacenik and had always sort of never found common ground with a soldier’s experience,” Woodroof said. “He spoke so movingly about what a strange world it was — this world where there’s all this choice, and you don’t have a designated tribe, and it just humanized it for me. … I think I was blinkered by my times and so I really appreciate Scott for un-blinkering me.”

Price said his experience in the military will always influence his ideas and actions, but he has no pursuits of becoming a veteran poet — just a writer.

“I definitely am not striving to be like a war poet by any stretch of the imagination. In fact, I’m definitely the opposite,” Price said. “OK, that was there. That part of life is over. Let’s continue to move forward.”