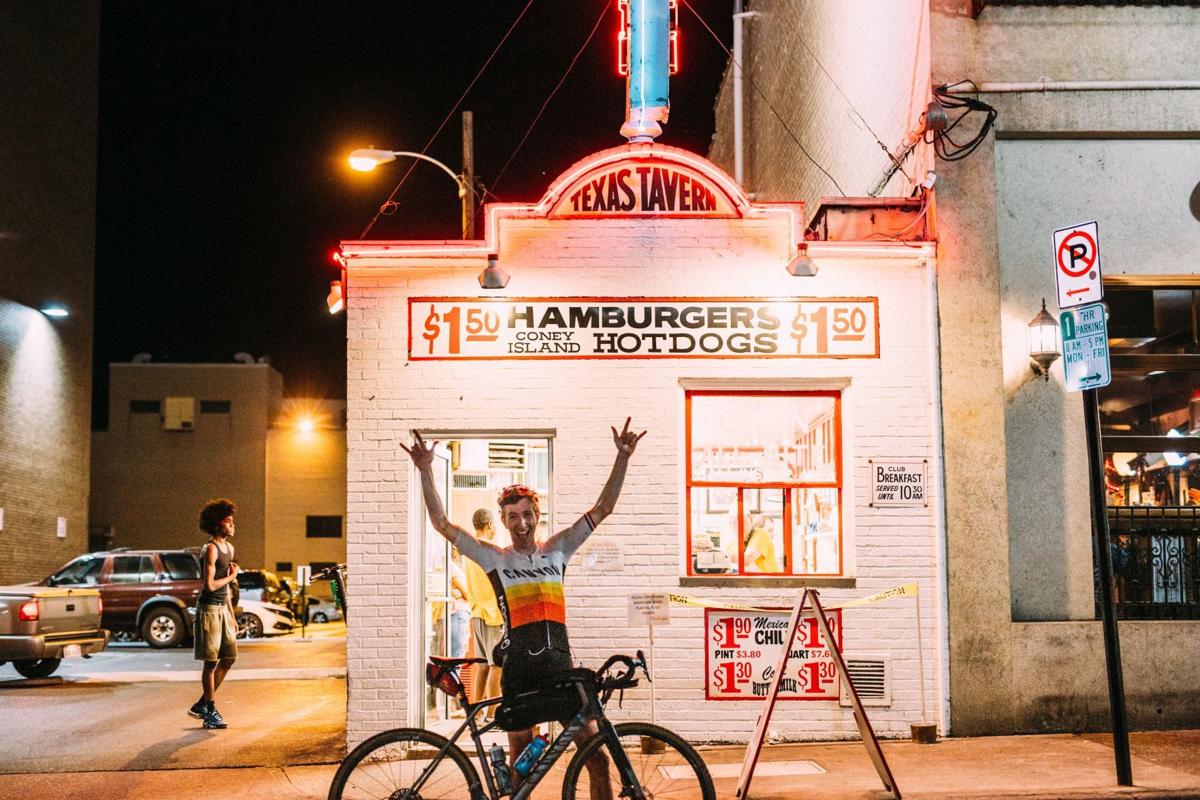 Jeremiah Bishop celebrates outside Texas Tavern, a late-night eatery in Roanoke that signifies the end of the RockStar bike trail. 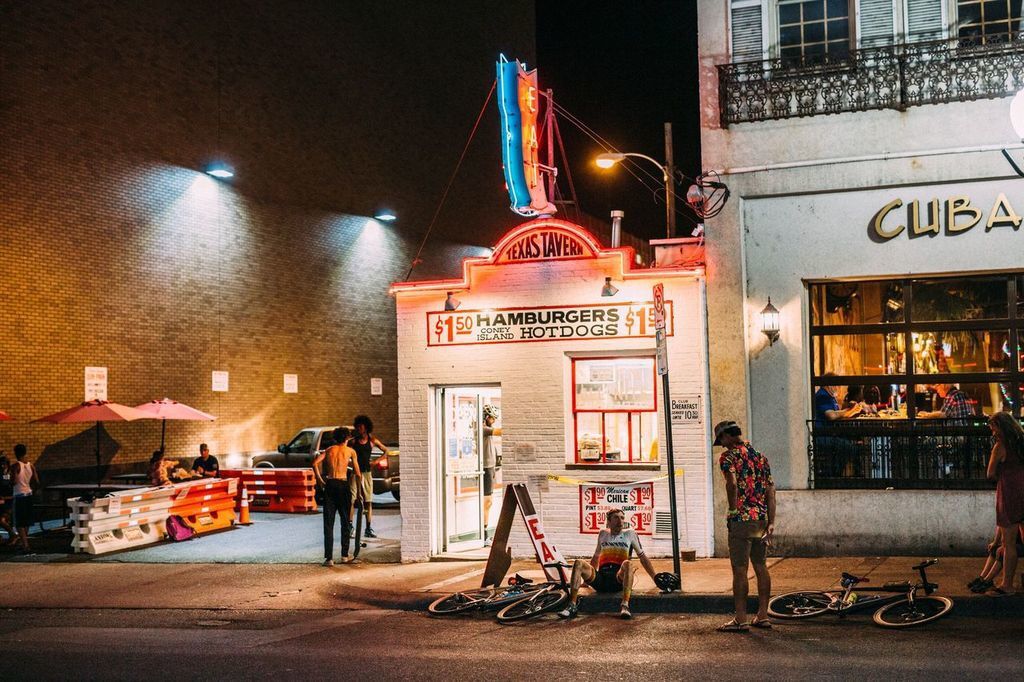 Jeremiah Bishop said the ride left his heart racing with such adrenaline that he was unable to sleep that night. But oh how peacefully he slept the following evening after driving back home to Harrisonburg.

Jeremiah Bishop documents his RockStar gravel route finish for fans on a GoPro outside Texas Tavern in Roanoke.

Jeremiah Bishop celebrates outside Texas Tavern, a late-night eatery in Roanoke that signifies the end of the RockStar bike trail.

Jeremiah Bishop said the ride left his heart racing with such adrenaline that he was unable to sleep that night. But oh how peacefully he slept the following evening after driving back home to Harrisonburg.

Armed with 4,000 calories in energy gels, PB&J’s and oatmeal creme pies, Jeremiah Bishop mounted his bicycle at Black Sheep Coffee at 3 a.m. last Saturday with one objective in mind — beating the fastest known time of the RockStar gravel route, logged by a duo at 20 hours and 7 minutes just two months before.

Thousands tuned in online to watch Bishop’s journey, which started off strong and on track to easily landing him a record-breaking time. It was not until Bishop was at the bottom of a hill on Shenandoah Mountain 75-miles into his ride that fear began to sink in. Bishop had turned down Benson Run Road instead of following a power strip and was 30 miles off course. The mistake could cost him the entire race.

“My heart sunk. I definitely realized my chance at the record was probably a lost cause at that point,” Bishop said.

RockStar’s gravel route is one of the most popular mountain-biking trails in the mid-Atlantic, starting from Harrisonburg (Rocktown) and winding through pastures and forests off-road before weaving through small towns on pavement to finally arrive in the Star City of Roanoke. At 255 miles on an indirect course up the Shenandoah Valley, only 21 riders claimed a spot on the route’s Hall of Fame, but Bishop was riding for more than just to earn a place on the list.

He was riding for a cause.

On July 20, a few days before climbing on his Canyon Grail mountain bike in downtown Harrisonburg, Bishop posted a fundraiser on Facebook for Our Community Place.

Our Community Place serves the local homeless population and, during the COVID-19 pandemic, has helped house at-risk individuals in motels and extended its food program to provide daily meals while working with decreased funds from the city budget.

Bishop asked fans to raise $1,000 for the community center, and the goal was met within 24 hours. So, at the encouragement of his wife, he raised the goal to $5,000.

Director of Development and Administration at OCP Eric Olson-Getty said a lot of the organization’s expenses have risen to hire additional case managers and extend the kitchen. From January to March, he said OCP helped 151 individuals, and by June the number of people served rose to 330, but funding possibilities are limited with the pandemic regardless of increased care provided, so the bike fundraiser was priceless.

“What Jeremiah has done has basically replaced the funds for two of our fundraisers,” Olson-Getty said. “It’s taken a chunk of our income deficit. ... This gives us a bit of breathing room, so we’re tremendously grateful for that.”

Even if Bishop did not beat the 20-hour, 7-minute mark, he set his heart to at the start of his ride, he knew he had to finish for his fans and for OCP.

“I was aware with COVID, they would have an influx of people in need and pressure for PPE, food and help sheltering people who are highly susceptible or with pre-existing conditions, so it seemed a very logical charity,” Bishop said.

With the dedicated fundraiser in the back of his mind and the road before him, he pushed on.

“I rallied, got back to the top, got into a good groove, felt steady and strong and started to chip away at my time,” Bishop said. “I was able to keep my head in the game. That’s the real moral for this thing, and for life, and when you hit challenges is you gotta keep going.”

Stopping only briefly for food and drink, Bishop pedaled to the metal until he reached the finish line at Texas Tavern at 19 hours and 29 minutes, shattering the solo record by four hours and the team record by 38 minutes.

Rob Issem, with Virginia Endurance Series and co-creator of the RockStar routes, said he was confident Bishop could crush the solo record but following him recover and cut down on lost time enough to beat the team record was amazing. Issem said Bishop’s record may go down in RockStar gravel route history, but his voyage will have lasting impacts on the community.

“We always have groups wanting to do development, so if we’re actively using these trails. That helps our case in preserving these trails for recreation and enjoyment rather than energy development,” Issem said. “A lot of people who get to the point where they’re like Jeremiah Bishop and they’re really good riders, they don’t realize how much other good they can do with their kind of fame and face and name recognition, so it’s great.”

Annually, thousands of bikers descend from Rocktown to Star City on the gravel trail, but Issem said navigation and skill often keep strong riders from making it onto the Hall of Fame.

“There’s probably, for half of the Hall of Fame entries, there’s one or two people who attempted each route that was not successful,” he said.

But Bishop’s perseverance paid off as he decorated the trail’s listing of finishers, and he celebrated with a hot dog from the tavern at 10:29 p.m. on July 25.

“It was pretty special to leave Harrisonburg in the dark, 3 in the morning and leave the ambient light of a city, ride all day through the forest and not go through but a few tiny villages and a town, Covington, and then descend out of the dark to Roanoke and see the sparkling lights,” Bishop said.

As a 20-year career athlete and USA national champion mountain bike racer, Bishop has earned medals, trophies and recognition across the world, but he said coming home and seeing the thousands he raised for OCP feels like a different kind of victory.

Growing up in a home riddled with substance abuse, Bishop clung to sports as an outlet and escape. Through biking, he found his success, and he said he hopes to inspire those who grew up similarly to not let their situation define their future.

“My background before really made me cognizant to how important the work of Our Community Place is and really beyond just helping people, they empower people to help themselves and that is one of the key tenets to really facilitating change,” Bishop said. “For me, finding an outlet and finding something to consume my energy gave me purpose, gave me wings and allowed me to see the world, to travel, to meet people, to learn.”