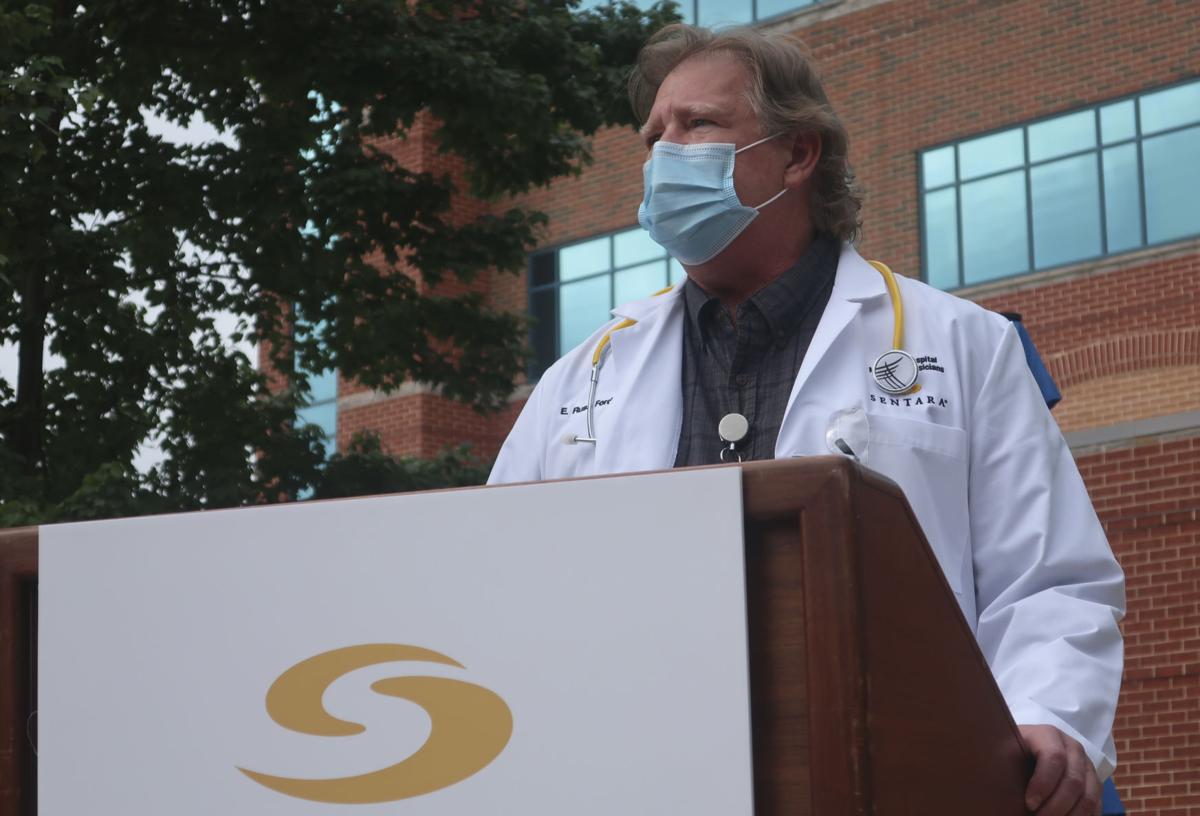 Dr. Russ Ford, a physician at Sentara RMH Medical Center, talks during a news conference outside the hospital Monday. 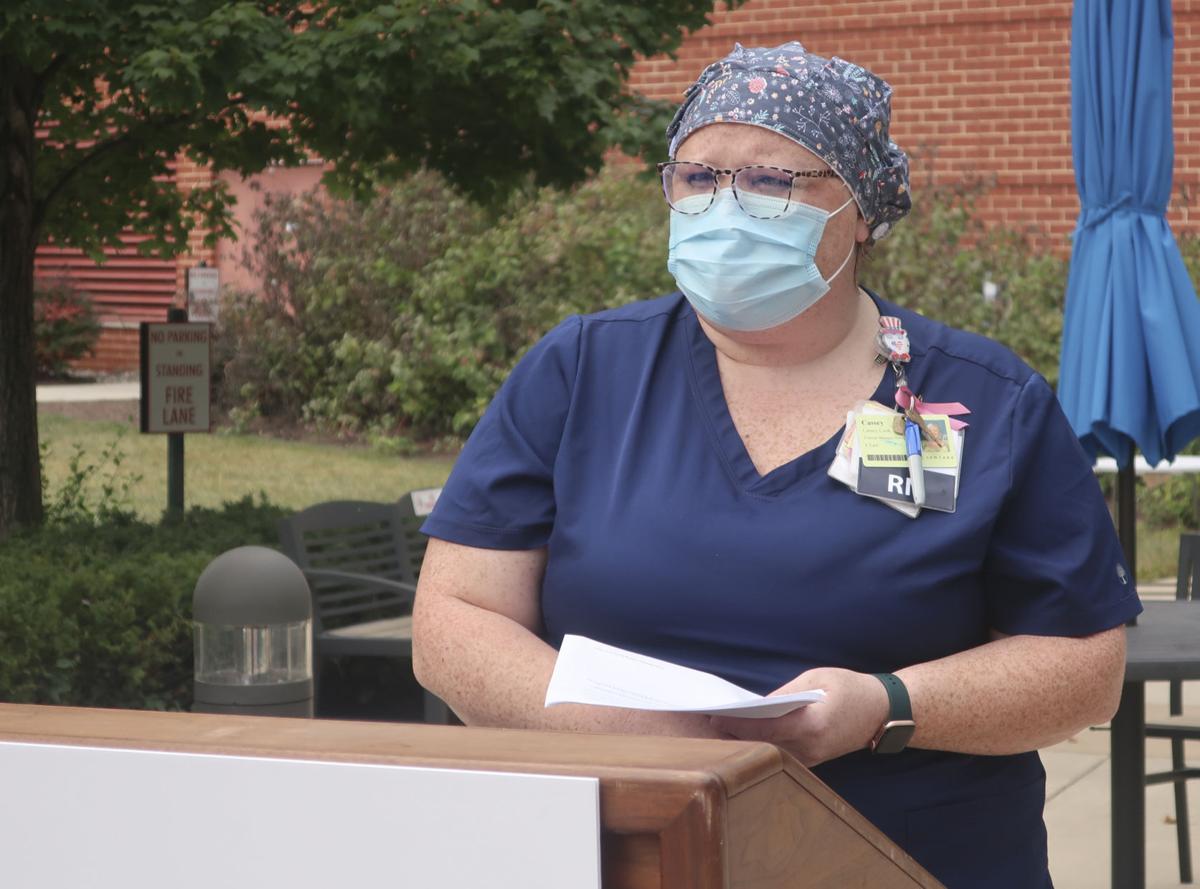 “We are still trying to provide that passion that we once had,” says Cassey Cook, a clinical nurse manager for one of Sentara RMH Medical Center's COVID units. “But we’re now pulling from an empty well.” 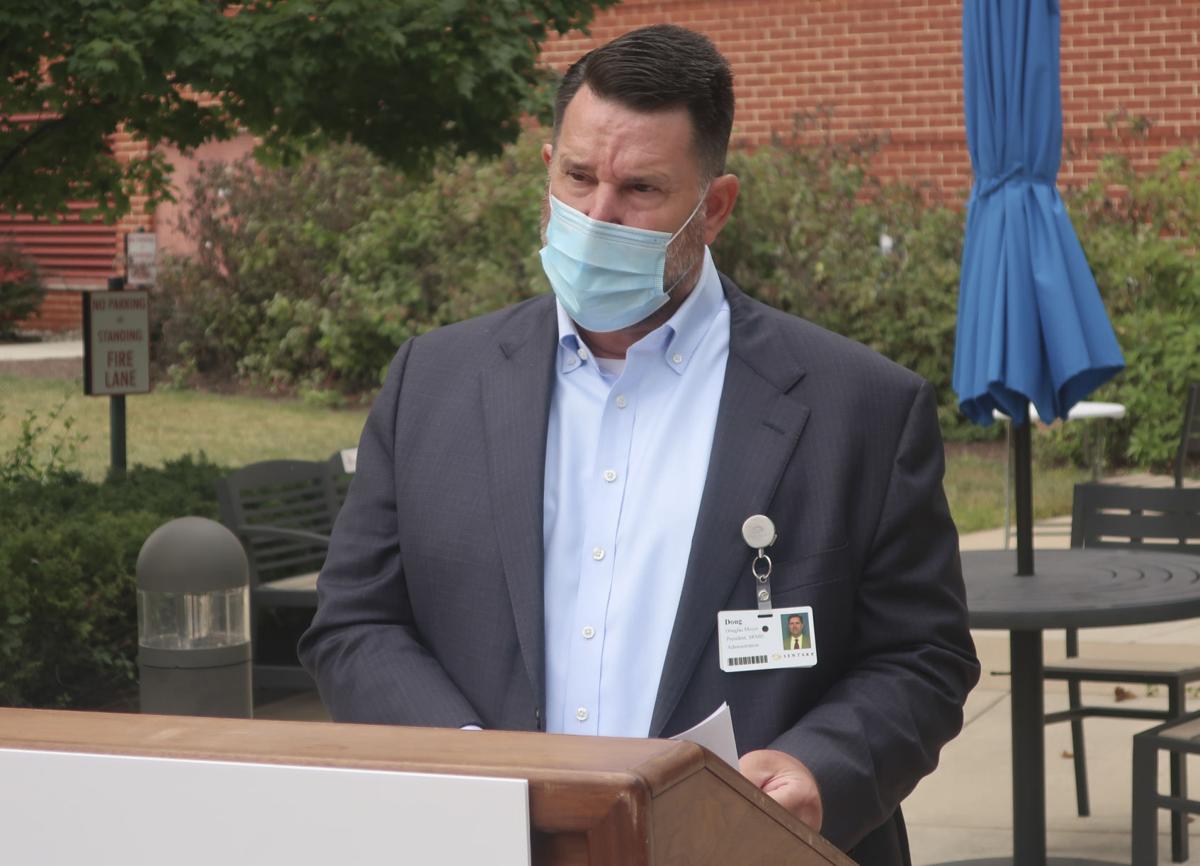 Dr. Russ Ford, a physician at Sentara RMH Medical Center, talks during a news conference outside the hospital Monday.

“We are still trying to provide that passion that we once had,” says Cassey Cook, a clinical nurse manager for one of Sentara RMH Medical Center's COVID units. “But we’re now pulling from an empty well.”

He wants the community to get vaccinated.

“All of our business is to keep people healthy or, if they’re sick, to get them better,” he said. “If we have a tool at our disposal to keep them from getting sick in the first place, let’s do it. We really need this.”

According to Sentara RMH officials and a new dashboard on the hospital’s website, there are currently 61 patients hospitalized with COVID-19, which accounts for 32% of the hospital’s total inpatient population. Ford said over 90% of those COVID patients are not vaccinated, and the vaccinated patients the hospital is admitting have “serious underlying medical conditions” such as emphysema.

“Get vaccinated,” Ford said. “Because the vaccinated folks are not getting sick enough to come to the hospital.”

According to the dashboard, which went live Monday morning, Sentara RMH has the highest number of hospitalized COVID patients in the healthcare group’s Virginia sites. That’s why Ford, Sentara RMH Medical Center President Doug Moyer and Cassey Cook, a Briery Branch resident and clinical nurse manager for fourth floor east — one of the COVID units — spoke outside the hospital Monday, pleading with the community to get one of three available vaccinations.

“This virus is very real,” Cook said. “This is a public health and safety issue that is now at the forefront of our community. We are seeing the sickest and the youngest patients we have ever seen.”

According to Ford, during the early portion of the pandemic the hospital was mainly seeing older people hospitalized due to the virus.

When the data is focused just on residents 18 years of age and older, 70.3% of Virginians have been fully vaccinated, with 51.1% of Harrisonburg and 55.5% of Rockingham adults fully vaccinated, according to VDH.

“We leave our families day and night to show up and care for others,” she said. “Burnout and job fatigue are consuming us. Health-care workers are mentally, physically and emotionally drained. We are spending hours a shift working with patients to ensure they can breathe comfortably all the while trying to provide that empathy and care to your loved ones who haven’t seen their families in weeks.”

But there’s still cause for concern, according to hospital officials.

“We will expand our capacity to treat any patients in need,” Moyer said. “But the trade-off is that we’re asking more from the same people who’ve been at the frontlines throughout this entire pandemic. We recognize the fear of health-care worker burnout; there is a limit to how much we can keep asking of the same group of health-care heroes to take on.”

According to Ford, Sentara RMH has a contingency plan in the books to expand the ICU if needed.

“We have plenty of ICU beds,” he said. “We have plenty of ventilators. Generally, it’s been running 5 to 10% of people getting sick enough to come into a hospital end up on a vent, that’s sort of like a ballpark [figure].”

But, Ford said, the hospital is currently at 85% capacity of its available beds. And, Moyer said, there are longer waits for inpatient rooms and for people to be seen in the emergency department. The hospital has also paused or cut back on all elective procedures “to take care of inpatient demands,” Ford said. “As soon as this sick population goes down in numbers, we’ll be able to resume the usual outpatient surgeries and procedures.”

“Our employees are fatigued,” Moyer said. “It has been an all-hands-on-deck effort now for over a year and a half. Until we get everyone in our community vaccinated, we won’t get a break.”

Cook, dressed in her smock and wearing a mask, reiterated the plea as Sentara RMH Medical Center continued to deal with the strain on its employees.

“We are still trying to provide that passion that we once had,” she said. “But we’re now pulling from an empty well.”

In demokkkrat new york city, a large percentage of blacks aren't vaxxed. I was unaware they were Trump voters. cdc and other medical staff aren't vaxxed. and I pay attention to them. I also remember joie and knees harris saying NO WAY they were getting the vaxx and how do I know they even got it. I also see thousands of the unvaxxed being delivered to a towns near YOU. Not a word they are coming across a river that should interest you canoe if you have ever been in one?

Just wait about three more weeks, the hospital will have mostly vaccinated folks with covid according to data from Israel.

Can someone go and ask the hospital why their staff is leaving? Are they compensating the staff to keep them there? Why do the Covid Nurses or any Nurse have to us PAL time if they catch Covid and why it isn't covered. I mean these people are on the front lines and the hospital keeps wanting more and more but is not giving anything back to the people in the trenches. DNR ask the hard questions for once.

They are not compensating their staff fairly, it's the opposite, they continue to slash pay and tell employees if they don't like it, they can leave. A few months ago when Sentara corporate was reducing RMH physician pay by 25% while also making tens of millions of dollars in profit and lavishing bonuses and 'non salary income' upon themselves, I thought DNR was going to expose just how corrupt Sentara is, but the articles ceased and DNR moved on. Sentara started bleeding RMH dry the second they took over and from what I hear, they're looking for a buyer, any buyer, because they can't make (steal) any more money from it.

Yeah, let's follow the lead of the poorest countries in the world and give people a bunch of unproven treatments and send them home to die. That'll show those libs who think taking the Trump vaccine is all you have to do to reduce your chances of getting very sick or dying from this disease! And hospitalization rates WILL plummet!

By the way, do you have any ties to the body bag industry?

Do your medical jobs and stop whining. My sources said RMH is far from full.

Apparently you can't read very well. As the CEO said, the hospital is not full because they've had to cancel all non-emergency surgeries and shift staff to take care of the unvaccinated Covid patients. So the MAGA-way is making people suffer needlessly all the way around just because you won't take Trump's vaccine. Good job.

Apparently you can't read -at all- it's not a "vaccine", it's experimental gene therapy.

MAGA and Trump … terms that roll off the tongues of triggered liberal screwballs at will! Uncontrolled obsession…explains the virus hysteria too!