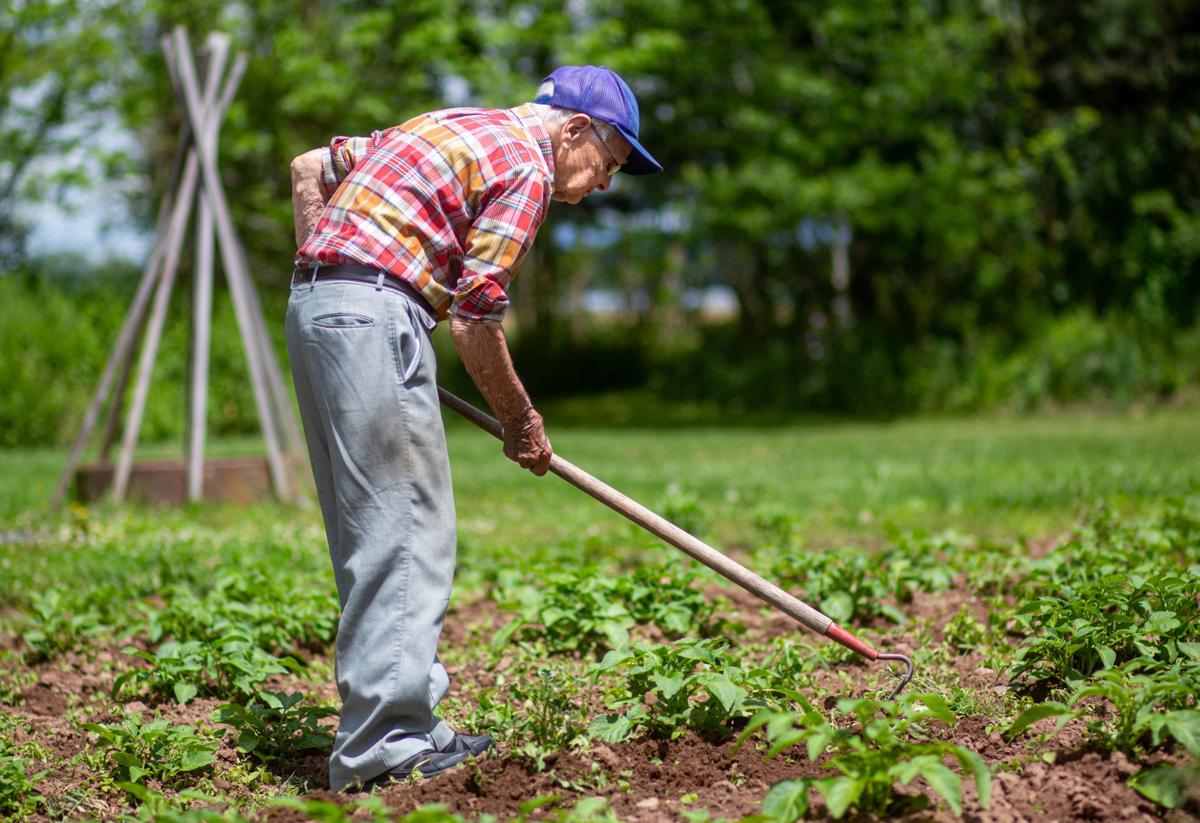 Otis Warren Dove weeds a potato field in the backyard of his Briery Branch home Thursday. 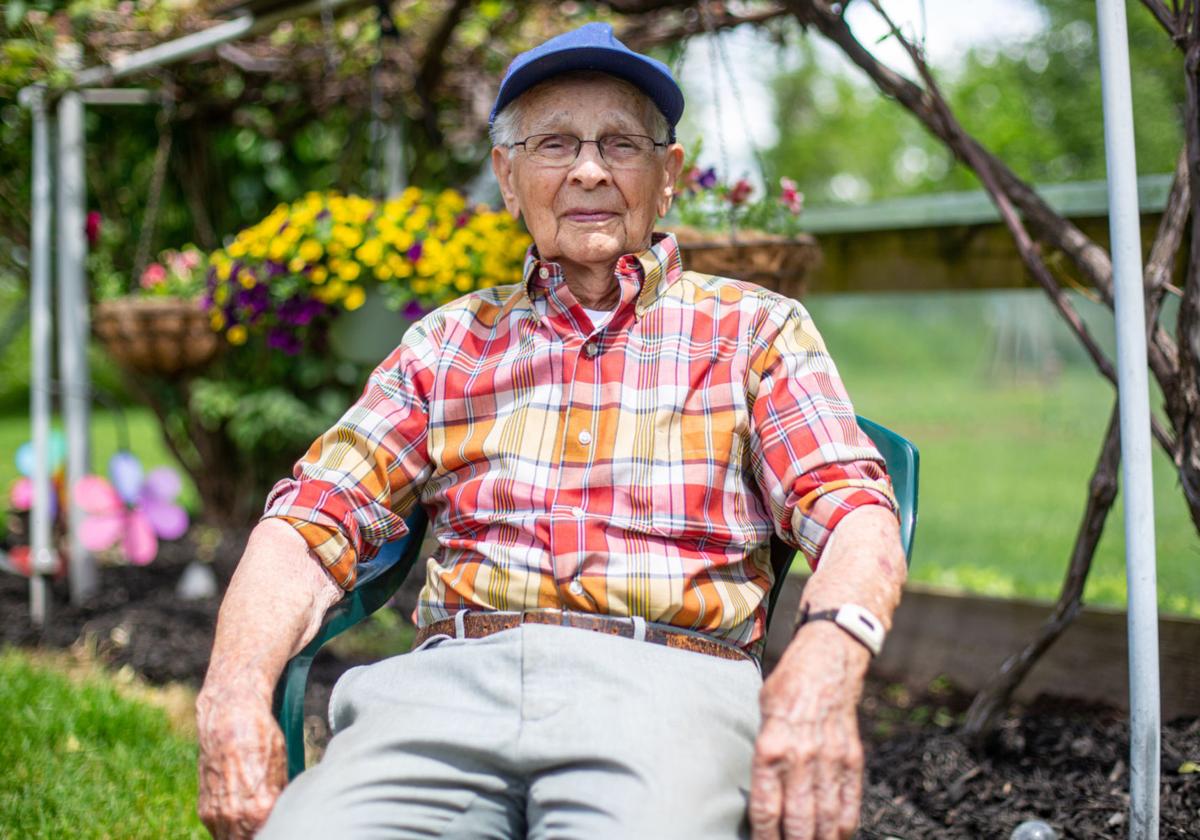 Otis Warren Dove poses for a photo in his backyard garden in Briery Branch on Thursday, two days before his 100th birthday.

Otis Warren Dove weeds a potato field in the backyard of his Briery Branch home Thursday.

Otis Warren Dove poses for a photo in his backyard garden in Briery Branch on Thursday, two days before his 100th birthday.

As a child in Bergton, Otis Warren Dove and his family hunted and gardened their food at their home and in the surrounding hills.

Now, 99 years and 364 days from his birth, he can still be found out the back of his daughter Yvette Auville’s house in Briery Branch digging in the soil.

“I work for about a half hour or an hour and then I rest,” he said.

And after that rest, he’s back to the task at hand.

Auville had been planning a celebration for her father becoming a centenarian, but the COVID-19 pandemic forced a change.

“We had planned a big reception,” she said. “And because of COVID, that took that all away, which broke my heart. So we had to come up with something.”

Nonetheless, on Saturday, well-wishers can still celebrate Dove’s birthday with him and his family.

“A drive-around parade celebration is what we’re calling it,” Auville said. “People can come around and blow their horns, throw cards in a basket, they can release balloons, they can play a birthday song. However they want express their celebration to him, socially distanced, they can.”

The event is on Saturday, Dove’s birthday, at the Briery Branch Church of Brethren activities building at 6628 Briery Branch Road, from 2 to 5 p.m.

When Dove was born on May 30, 1920, Bergton was known as Dovesville. He said the name change was only one of the innumerable things that have changed over Dove’s life and the century.

Dove said his first memory was of how distant his family lived from their nearest neighbor.

His family lived bordering the West Virginia line and at least a mile from anybody else. The main way they got around was to walk, Dove said.

He began going to school at the age of 10 in West Virginia, since he had to walk to the school 3 miles each way versus the nearest school in Virginia, which was 5 miles away and 10 round trip.

“It would take about an hour,” Dove said of his walk to school in West Virginia.

It was a two-room schoolhouse with outside bathrooms named Cullers Run School, according to Dove. Lutheran and United Brethren preachers would come on the weekend to preach, and Dove and his family would go to the schoolhouse to worship, he said.

Dove grew up to become a deacon himself at Valley View Mennonite Church in Criders starting on July 25, 1952, for 50-plus years.

Back in his school days, by the end of his first year in school, he had been promoted through first, second and third grade.

“We didn’t have hardly anything to eat,” he said. “We was out hunting squirrels and rabbits and whatever we could find. And not only that, we raised everything.”

“You’d eat everything that was eatable,” he said.

Dove continued school until the age of 15, when halfway through his seventh-grade year, the West Virginia Board of Education stepped in due to Dove living in Virginia.

“They said ‘You can’t go to school in West Virginia anymore, so I had to quit,” he said. “Cause if I wanted to go to school, it was 5 miles [one way] to walk.”

At 17, Dove met Lottie Dove, who grew up in the same area but was no relation to Otis. They married a year later and went on to have four children — Gary Dove, deceased, Jim Dove, of Dayton, Esther Strawderman, of Lost River, W.Va., and Auville.

“My father was such a faithful, faithful man,” Auville said of her father’s care of her mother as she went to an area retirement home.

Otis Dove would visit Lottie daily starting around lunch and leave after he fed her dinner. He also formed a musical group to entertain residents, along with Lottie, once a month.

Lottie Dove passed away in 2004, according Auville.

During the Second World War, Dove answered the call. He was not allowed to enlist due to a goiter in his neck, but Dove said he planned to seek conscientious objector status had he been cleared.

His brother Marvin did join, but was sent back after getting sick. Dove’s uncle fought in the First World War.

He also was a welder at Walker, now Tenneco, for 10 years. In one incident there, Dove lost part of his right pinkie in a machine, according to Auville.

“He said they watched it go down the conveyor belt and they got him to the hospital, of course, but they couldn’t reattach it,” Auville said. “But he just kept on, kept on.”

When asked for his thoughts on the Cold War, Dove said he didn’t have an exact response.

“It’s selfishness and everyone wants to be top dog,” he said of the period. “Everybody for themself and the devil for them all.”

His last working years he spent at James Madison University in the building and grounds department, where he cleaned and tended the school’s swimming pools.

Dove said he never heard of any of his previous family members reaching 100 years of age.

“I have the old story I tell,” Dove said. “I’ve tried to serve the Lord all my life and I’m a vegetarian.” He has been a vegetarian since he was a toddler.

Dove said he attributes his long life to his service to God, the love for his family, his diet and self-discipline.

He said the values originated from how his parents, Anges and Mary Dove, raised him.

“And I do try to take care of myself,” Dove said with what looked like a wry smile behind a face mask.

And even now, Dove will not be stopped. Just three weeks ago, he helped build the porch outside Auville’s house by digging the post holes with a handheld clamshell hole digger.

Auville said she was hoping to get 100 cars on Saturday for her father’s celebration, despite the COVID-19 pandemic.

“Make lemonade out of lemons,” she said of setting up the event. “I get that from him.”