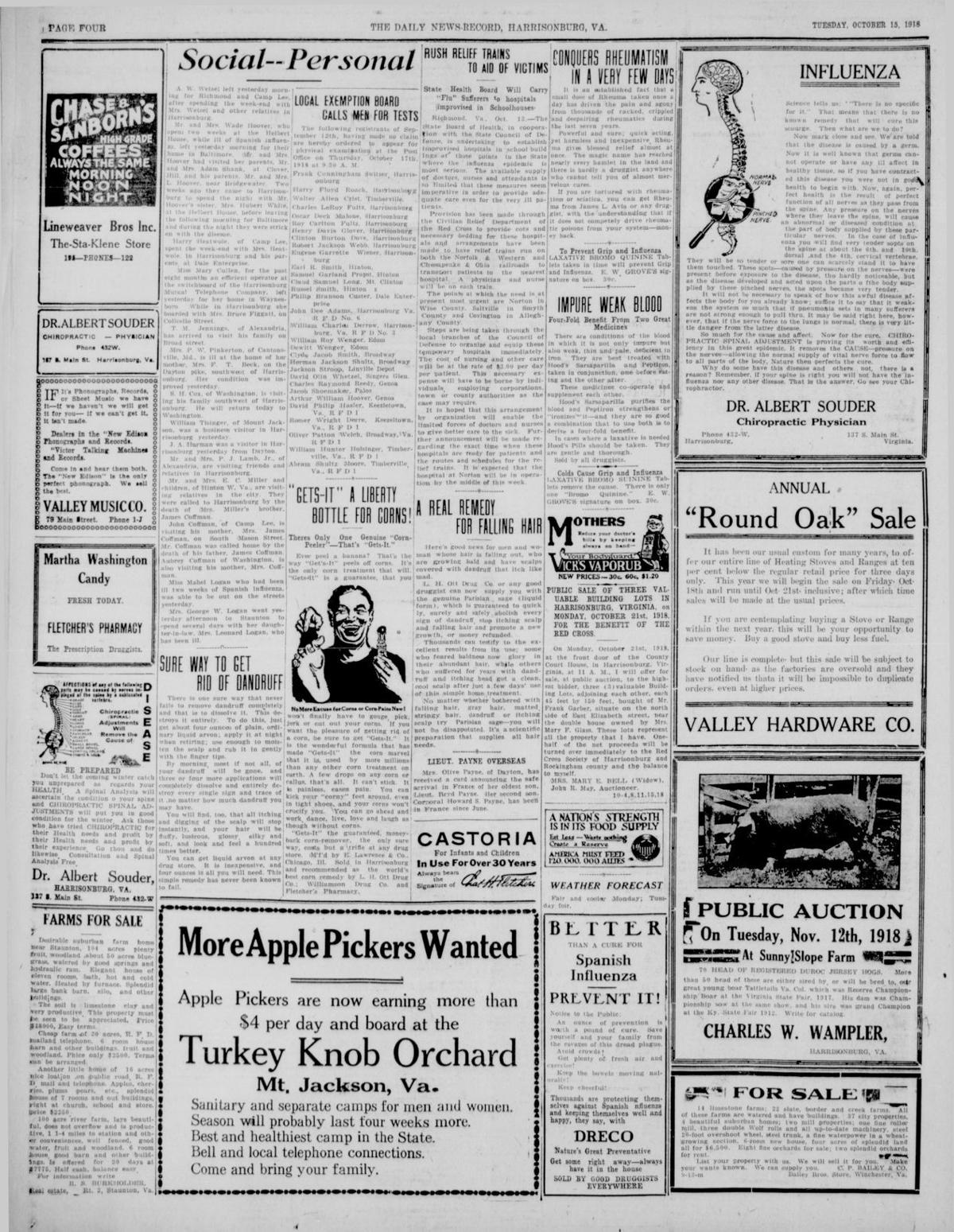 The Oct. 16, 2018, edition of the Daily News-Record featured ads for Spanish flu preventions. 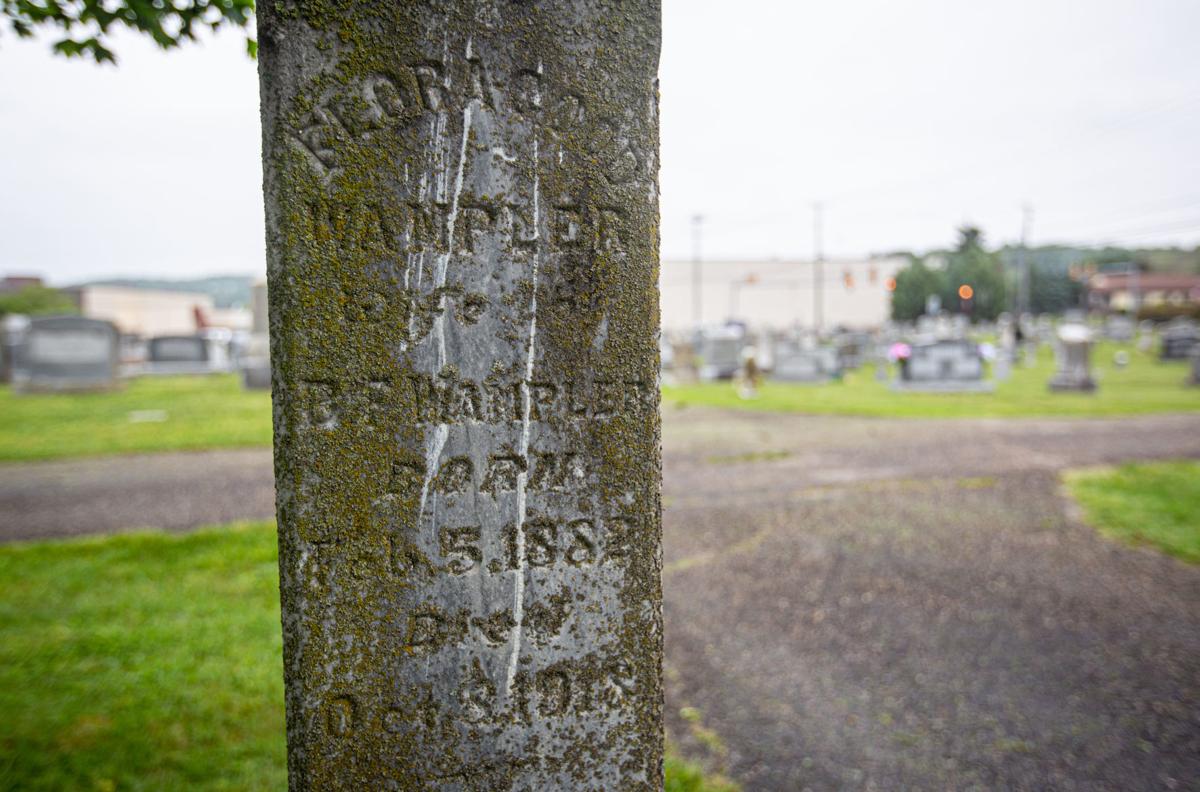 Flora Good Wampler is interred in Oak Lawn Cemetery in Bridgewater. She died on Oct. 8, 1918, “following a brief illness of Spanish influenza, which resulted in pneumonia,” according to her obituary. She was 36.

Charles M. Miller is interred at Oak Lawn Cemetery in Bridgewater. He died Dec. 14, 1918, at 35 of “double pneumonia complicated by Spanish Influenza after an illness of only short duration,” according to his obituary.

Julia Page Price was 25-years old when the Spanish influenza crept its way into Virginia.

Her husband, C. Grattan Price, was recently elected president of the Virginia Local Agent’s Association and the front pages of the Daily News-Record showed season tickets for the county fair costing just $1.10.

But buried in the pages of the Sept. 21, 1918, edition of the paper was a report from two Army training camps in Virginia — Camp Lee and Camp Humphreys — with high numbers of Spanish flu cases.

Within eight days there were 40 cases reported in the town of Dayton and the headline “Spanish ‘Flu’ Is In County” appeared on the DN-R’s front page. It wouldn’t be long until Price, living off Newman Avenue in Harrisonburg, also came down with the flu.

“She would say it was very rough in town,” said Julia’s granddaughter, Eleanor Price. “She always said [the Spanish flu] was how she lost her hearing.”

With her hearing gone, Julia was known for wearing glasses with built-in hearing aids, something Eleanor found to be unique.

Growing up, Eleanor heard stories from her grandparents about what it was like to live during the Spanish flu pandemic and its aftermath. Julia was 58 when Eleanor was born in 1951, and as she taught her granddaughter how to sew, Julia occasionally recalled the days of 1918.

“I know [Julia] was talking about so many people [dying], bagging them up and stuff. It was rough in the city,” Eleanor said.

In the weeks to come, the pages of the Daily News-Record were filled with ads for Vicks VapoRub — a recommended guard against the Spanish flu — and a list of residents who were either recovering from the virus or had died by its hand.

Nearly 16,000 Virginians reportedly died from the Spanish flu, according to Encyclopedia Virginia. As of Thursday, the Virginia Department of Health reported 1,099 deaths in the state as a result of COVID-19.

In 1918, schools were shuttered, churches were closed and businesses locked their doors — a parallel to today’s response to the COVID-19 pandemic on the local and national level.

How It Possibly Happened

Margaret Mulrooney, associate vice provost and professor of history at James Madison University, had been studying the university’s archives for years and recently published a blog detailing the events of the 1918 influenza pandemic at what was then the State Normal School.

During an interview with the Daily News-Record, Mulrooney said the first reports of Spanish flu came on Sept. 13, 1918, with the Virginia cases originating from Camp Lee located outside of Petersburg as troops trained to fight in World War I, which would end a month later.

“It spreads within hours,” she said.

September of 1918 in Virginia was a time for students to head back to school. The State Normal School, a segregated, women’s-only institution, was ready to commence the academic year with 300 registered students between the ages of 16 and 25.

Mulrooney said there were already cases in Harrisonburg and the town of Dayton was known as a “locus,” or a place where cases were being reported.

“It was tied to movement of troops,” she said, adding that soldiers from Camp Lee could have been traveling back home to the Valley by train and therefore spreading the virus.

“Much like today, they didn’t know how it was getting spread,” Mulrooney said.

While not all of the students lived on campus, Mulrooney said the dormitories were overcrowded and most rooms were home to two, sometimes three students. All shared a common living space. Those who didn’t live on campus boarded with families or in special rooming houses and apartments nearby.

As the infirmary began to overcrowd, Julian Ashby Burruss, the school president at the time, approved transforming what is now Jackson Hall into an emergency infirmary.

Off campus, the first Spanish flu deaths were reported in Dayton. In the Sept. 20, 1918, issue of the Daily News-Record, one of the top headlines reported the death of Sallie Winegold, 40 — the second person to die in Dayton from Spanish flu-related pneumonia.

By Oct. 8, 1918, half of the students and faculty at the State Normal School had the Spanish flu and the campus, along with all city schools, closed. Mulrooney said Burruss fell ill and appointed chemistry professor James Johnston to serve as acting president of the school.

The Daily News-Record reported that all students and faculty who were deemed “well” or “sufficiently recovered” were sent home while the school was closed.

Nearby Bridgewater College also canceled classes for three weeks during the fall of 1918, according to Stephanie Gardner, special collections librarian at Bridgewater College, who found a collection of “The Philomathean Monthly” — a yearbook, newspaper and other students’ writings during 1918.

“Bridgewater College appears to have handled the 1918-1919 pandemic well,” Gardner said. “In November 1918, after a major wave of the Spanish flu, ‘The Philomathean Monthly’ editors reported that nearly 80% of the students at the College escaped the flu and none of the students who contracted it fell seriously ill.”

The campus was quarantined in October and reopening in November was done in phases. Gardner said when classes resumed, the campus was still under lockdown and day students were not permitted to attend for two more weeks.

At the State Normal School, students returned back to campus on Nov. 6, 1918, but the second wave of influenza hit the area by Thanksgiving, Mulrooney said.

Public schools closed, funeral homes were forced to cut services short and the “economic pressure” to reopen businesses, as Mulrooney described, were all experienced in 1918 just like today.

A sketch found inside a State Normal School’s yearbook, “The School Ma’am,” shows nurses wearing masks, students being asked to keep 10 feet apart from one another and people sneezing toward the floor.

“They didn’t call it social distancing, the understanding was different,” Mulrooney said.

During the influenza outbreak, the state Board of Health closed public establishments, did not allow church services and warned against public gatherings. During the COVID-19 pandemic, Virginia implemented similar restrictions and faced pressure to reopen.

When Gov. Ralph Northam announced the state would enter Phase One of reopening select businesses and operations on May 15, Mulrooney said there was an “interesting parallel” between now and 1918.

“The state of Virginia relaxed its closure policy for stores, churches, schools, etc. in late October 1918 under pressure from business leaders,” she said. “In 1918, a second wave of influenza began in November that lasted until February 1919. Whether Phase One or Two of [the] reopening will result in a similar spike remains to be seen, of course, but it seems like the economic pressure is very similar.”

Viruses are normal. People are not.

Clearly what I meant is people are paranatural. Responsible and loving and prescient.