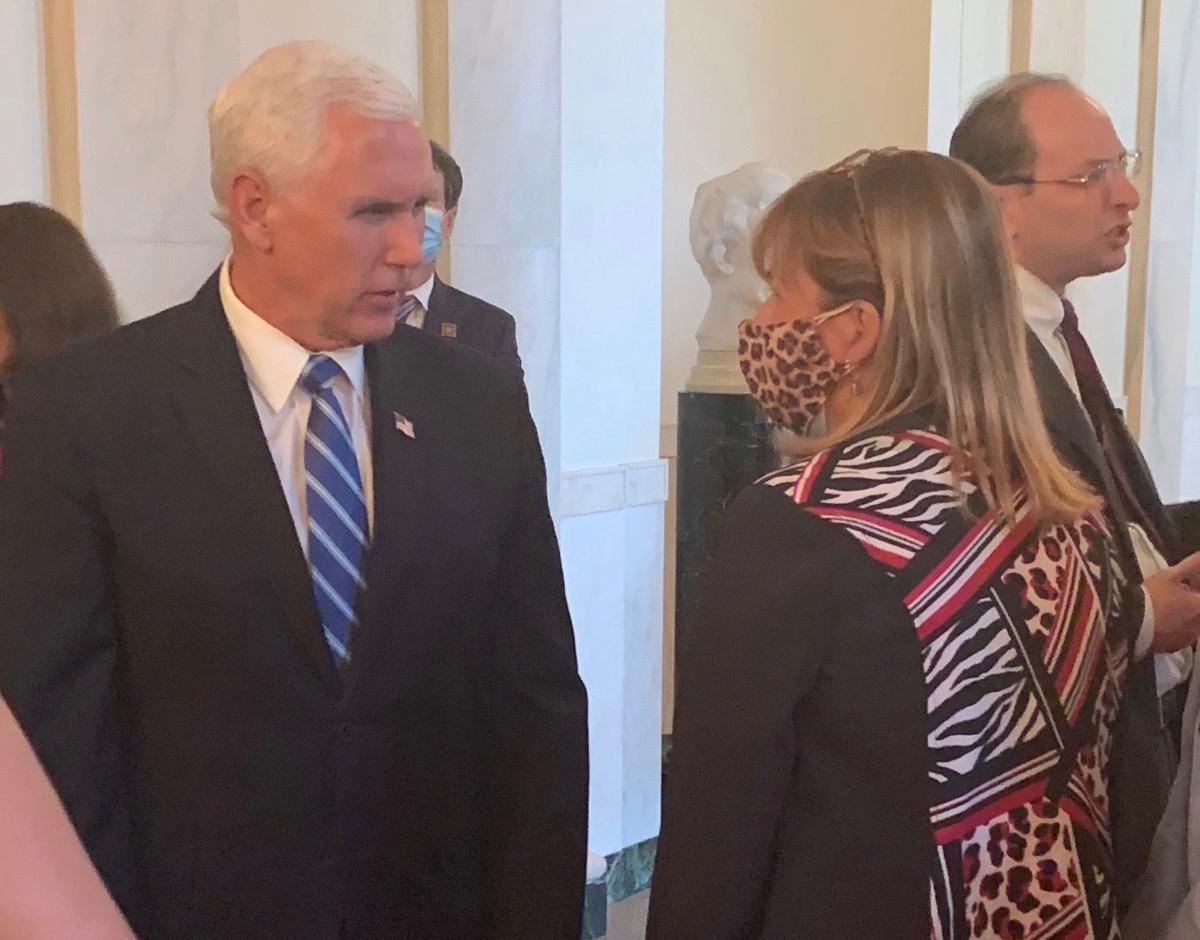 Dr. Cathy Slusher, right, a Harrisonburg-based physician, speaks with Vice President Mike Pence at the White House on Tuesday as part of the National Dialogue for Reopening Schools Safely.

Dr. Cathy Slusher, left, a Harrisonburg-based physician, and her daughter, Maci Clements, pose during a trip to the White House on Tuesday. They were invited to be a part of the National Dialogue on Reopening Schools Safely with President Donald Trump and Vice President Mike Pence.

Dr. Cathy Slusher, right, a Harrisonburg-based physician, speaks with Vice President Mike Pence at the White House on Tuesday as part of the National Dialogue for Reopening Schools Safely.

Dr. Cathy Slusher, left, a Harrisonburg-based physician, and her daughter, Maci Clements, pose during a trip to the White House on Tuesday. They were invited to be a part of the National Dialogue on Reopening Schools Safely with President Donald Trump and Vice President Mike Pence.

It’s not every day you get invited to the White House. And it’s really not every day that you get the chance to share your thoughts on a topic with the President of the United States.

Dr. Cathy Slusher, a Harrisonburg-based OB/GYN and small business owner, and her daughter, Maci Clements, were among 30 people invited to give remarks on reopening schools for the National Dialogue on Reopening Schools Safely panel. Among the attendees were President Donald Trump and first lady Melania Trump, Vice President Mike Pence, secretaries on education, college professors, presidents of school boards and more.

Slusher has a friend who works as an aide for Pence and suggested that Slusher would make a good addition to the panel as a mom of a college freshman, a doctor and business owner.

Slusher found out Sunday night that she was getting an invitation and on Tuesday she and Clements headed to the White House. The panel was held in the residency wing of the White House where citizens are not normally permitted. Slusher and Clements attended three panels before a round-table discussion with Trump and Pence.

All guests were invited to speak and Slusher discussed the reopening from her perspective as a doctor and also as a parent. She talked about the difficulty her daughter faced having to come home early from her first year at Virginia Tech, both academically and emotionally.

“Fortunately, she’s a very good student,” Slusher. “But her GPA could have been a little bit higher.”

Even more detrimental was not knowing if she would be going back to school in the fall due to the COVID-19 pandemic. Virginia Tech announced its plan to reopen, which has given Clements some piece of mind.

The overwhelming sentiment shared by panelists Tuesday was that schools need to reopen in the fall, but with multiple plans and contingencies. For example, schools need to have specific plans for occasions such as a positive case at one school that doesn’t shut down the whole school division.

The other opinion that was prevalent at the round table was that parents should have the choice of whether to send their child back to school or do 100 percent virtual learning, Slusher said.

The number one challenge that was discussed when talking about the return to school was transportation. Because of the need to socially distance, schools have not found a good way to get students to school efficiently and safely.

After her comments, Trump gave Slusher feedback and she said that he was gracious and respectful.

“It was such an honor to start with, but an honor and a privilege to be heard,” Slusher said. “It’s not just a little bit special, it’s a lot special.”