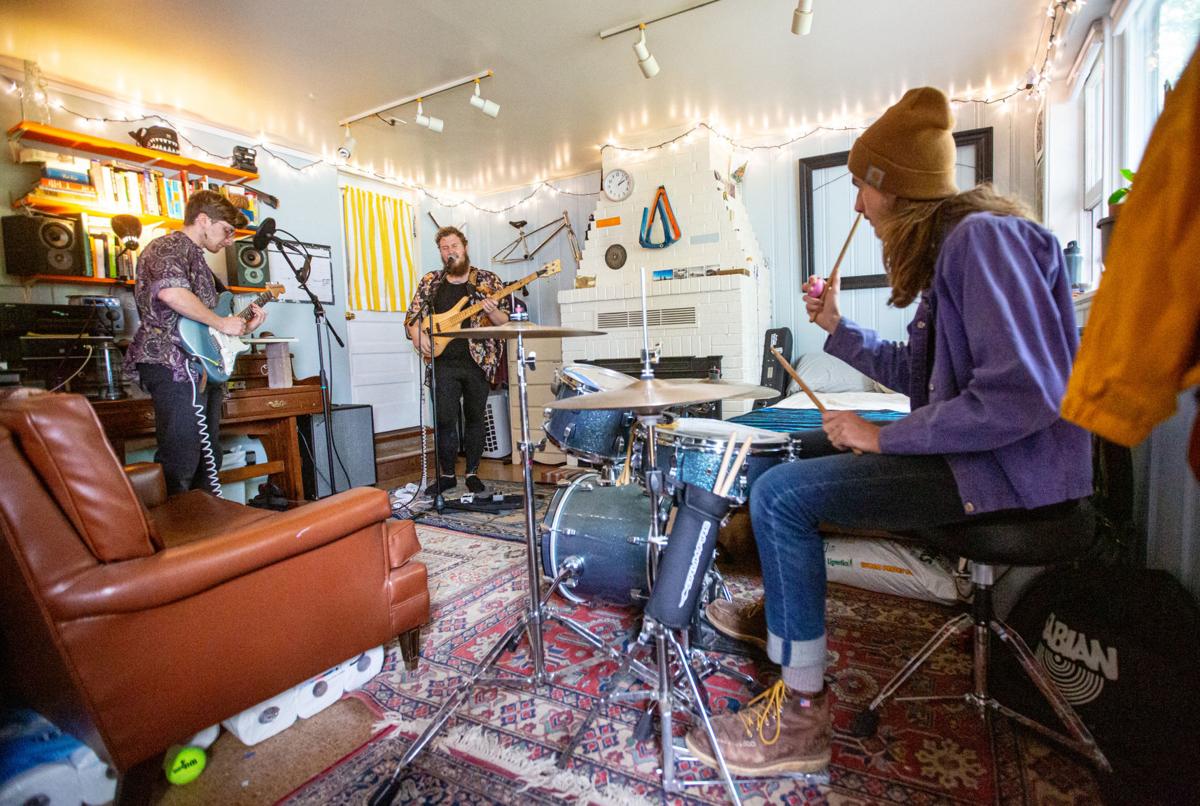 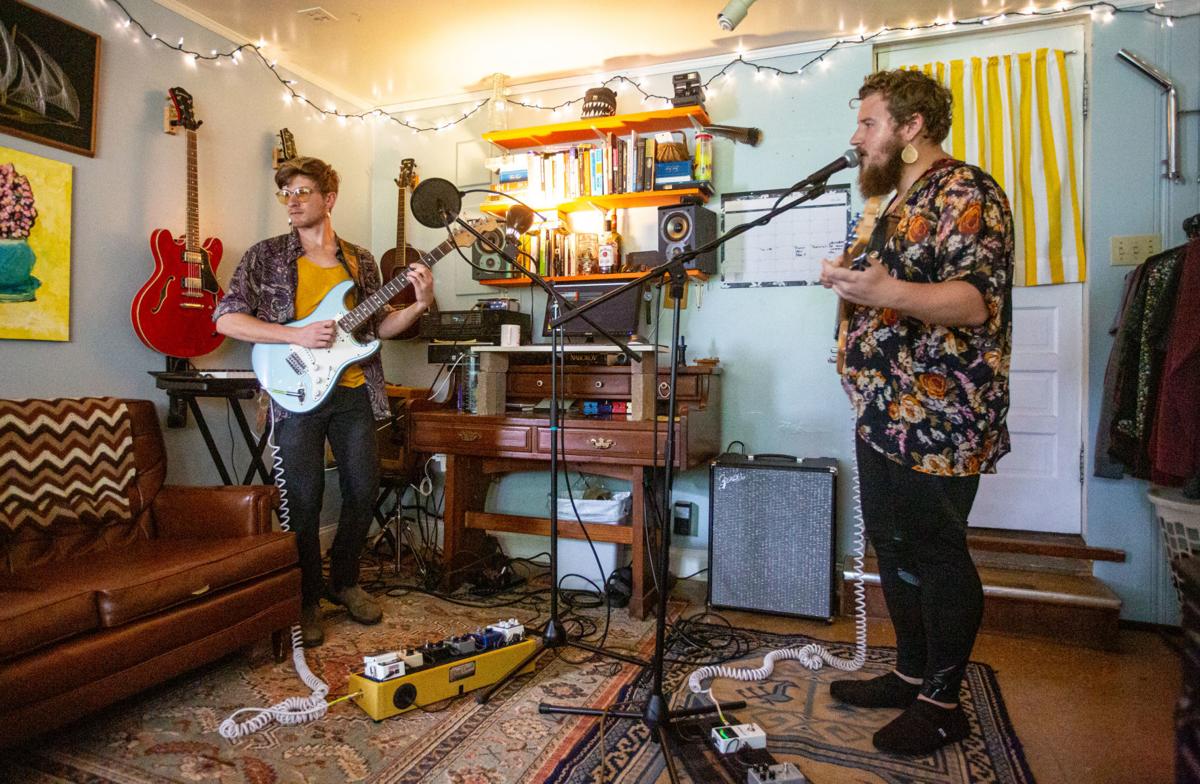 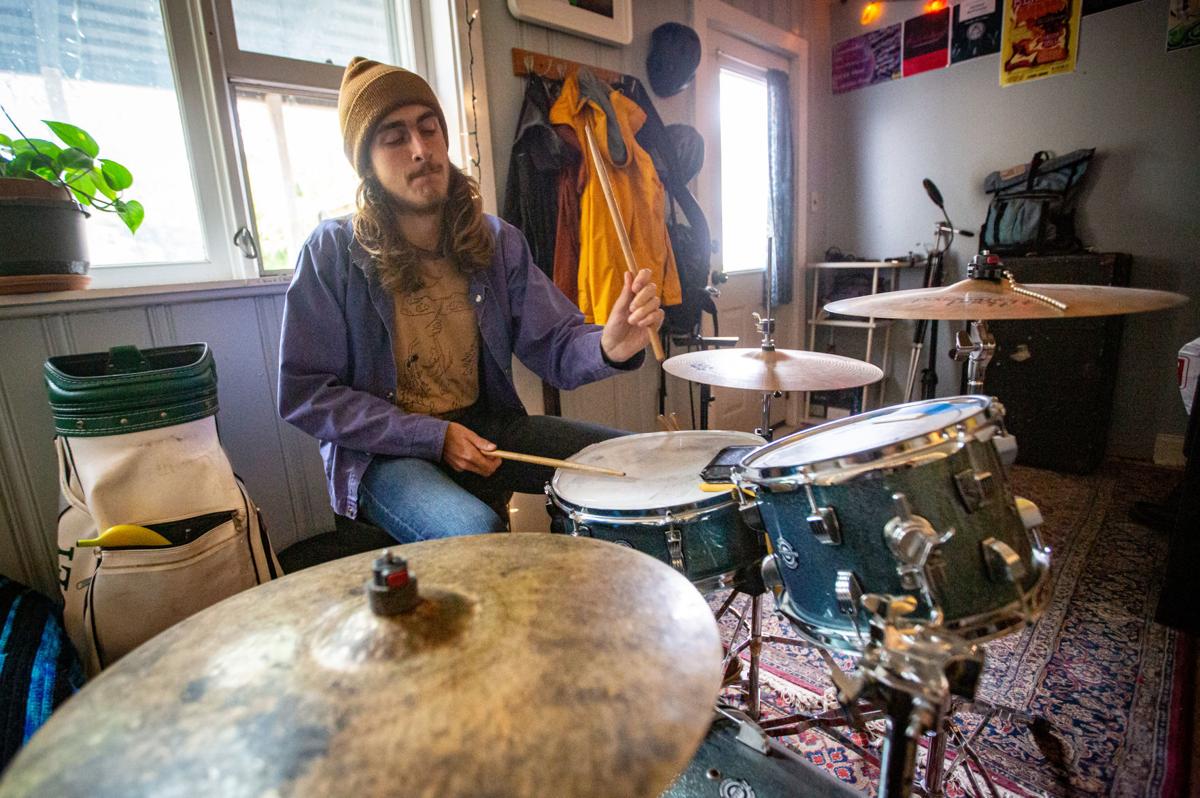 At the foot of the bed rests a glittery blue drum set and lodged between a worn leather sofa and his desk are four instruments crammed, but within arm’s reach. Boundaries between personal, private and work life have become obsolete for many, but Valentin Prince has chosen to embrace the chaos during the pandemic and convert his bedroom into a makeshift studio and recording booth.

“My room being the practice space has shaped my life. … It reminds me what I’m going for. What I’m trying to accomplish, like my goals,” said Prince, guitarist and singer of Prince Bellerose. “My bedroom has become less of a bedroom, more of a studio, and I like it that way.”

Nearly three months into the COVID-19 pandemic, musicians have adapted to streaming shows online and collaborating with distant artists for songs in solidarity, but revenue and environmental changes have caused some music makers to reflect on and experiment with their artistic intentions.

Jaguardini is doing weekly aerobic Facebook videos, neon leotards and legwarmers included, and Lobby Boy is hosting socially-distanced happy hour conversations online. Lyrics and beats may be the foundation of what musicians sell, but the pandemic has allowed several artists the opportunity to dive deeper into their creativity and swim in the endless possibilities of online production.

For the trio of fellows in Prince Bellerose, time away at the start of the pandemic gave the band members time to recognize their collective ambitions of moving to music-making full-time within the next year. With shows and tours canceled, Prince Bellerose decided to open a Patreon account, a membership platform that awards subscribers with exclusive content, as a way to connect with audiences and maintain a regular source of income. Patreon members can choose from a variety of tiered subscription levels to access rewards like discounted merchandise or premium content such as art from drummer Joseph Harder, poetry from bassist Daniel Bellerose or instructional videos for the guitar from singer Prince.

“Long term, I think this really enlightened us. We all took a little time off work at the beginning of this and realized how A, how little money we needed to live and B, how important the band was to us. So, the biggest change after this is that we’re all thinking of all going sometime next year full-time touring,” Bellerose said.

Since the start of May, Prince Bellerose’s trio began streaming “Earworms” on Soundcloud, an unedited, unfiltered music history, review and discussion podcast tinged with swearing, laughter and the occasional existential sigh. Prince said the bandmates all have great conversational chemistry and an interest in the topics that lends to an ear-catching listening experience, but recording the episodes is also constructive for him.

“Having experience trying to fill air with speaking … I can sing, I can belt my [butt] off, but when it comes to just talking, banter between songs, for some reason that’s a block for me. But being in the podcast is definitely helping train that muscle,” he said.

House-show heroes Jeff Gormon and Jake Cochran of Illiterate Light first met and started making rock music with a stand-up drum set and toe-licking guitar chords in Harrisonburg but now live divided by state lines. Individually, the members of Illiterate Light have performed virtual shows streamed into homes around the nation, but together, Gormon and Cochran are planning to kick off a video series on YouTube and Instagram TV (IGTV) called “Illiterate Bikes,” which recounts stories of their early adventures roaming Harrisonburg on two wheels and new projects.

Episodes will be released every Tuesday through June at noon, and the two will jump on camera every Wednesday at noon for a live Q&A on IGTV.

Isolation has also forced some artists to move back to their family home, disrupting their everyday scenery and altering their production setup.

Willis Landon, who performs under the stage name Sashathem, has been sharing hip-hop tracks since 2017. As a recent graduate from James Madison University, the end of the school year sent Landon packing to live with their family in Roanoke for the remainder of isolation. Moving meant parting with several pieces of equipment such as a vinyl deck, Fender amp and baritone ukulele, but they said downsizing has benefited their process.

“Having to move out of the house I lived in, I had to get rid of a bunch of gear. I just had too much stuff, so I’ve stripped down my production set-up, which has been good,” Landon said. “It’s made me be a lot more intentional. Normally when I start making an instrumental, I will mess around on everything I have available to me, and now I’m really trying to just sit down and make do with the stuff in front of me. … I’ve been making some much-needed leaps as far as doing creative things with production.”

Landon said as the world moves online, opportunities to connect with talents around the globe has expanded. In mid-March, Sashathem partnered with Michigan-based artist Mike The Yellow Horse for a lo-fi tape called “THEM HORSES!” Glimmering in the distance for Sashathem’s future is the album “Glass House,” set for release at the end June, and to tease fans, Landon has released two tracks: “Reflection” on March 20, and more recently, “Divine” on May 15.

“The collaboration because of isolation has gone way up. I’ve been able to interact with artist that before I didn’t think I would have much of a chance of communicating with,” Landon said. “It’s so hard to find a way to actually rehearse, which is what I think is the thing I’m missing most in isolation more than anything is playing with other people, not so much playing for people.”

Folk-rock singer Teddy Chipouras is using his time to connect with local acts but using an innovative method to collaborate. To feature various talents separated during isolation in one track, Chipouras asks musicians to record themselves independently via the cellular app Voice Memos, and then he layers each recording one-by-one onto the baseline track until the final product comes together.

“I’ll send a little snippet of an idea I have to a friend, and they will send something back, and it just goes back and forth until the song develops more and turns into something,” he said. “I think it’s sort of like the Wild West right now. Everyone is trying to figure out a way we can sustain ourselves while we’re going through this crazy thing.”

In his free time, Chipouras is also dedicating himself to improving his creative surroundings. In late April, he constructed a wooden desk to center and facilitate his recording and writing process. He said grounding himself in projects and trying new activities is the silver lining that shines through the confusion.

“Sometimes it’s hard to look at the bright side but just having time to explore a new hobby or learn something new, take care of yourself more is a bright side for me and just for me appreciating the position I’m in,” Chipouras said.