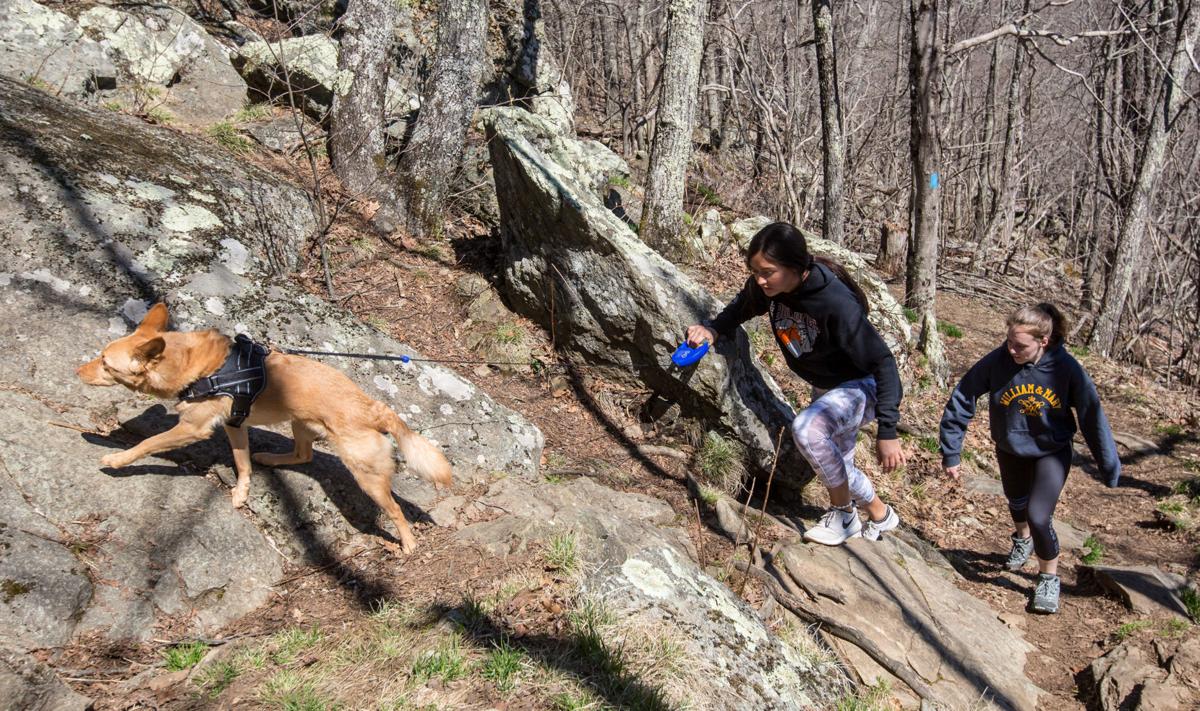 From left, Bentley leads Kristen Weaver and Bel Liscomb, of Luray, up into the next section along the Bearfence Rock Scramble in the Shenandoah National Park on Monday. Park officials have restricted access and closed facilities in response to the COVID-19 pandemic. 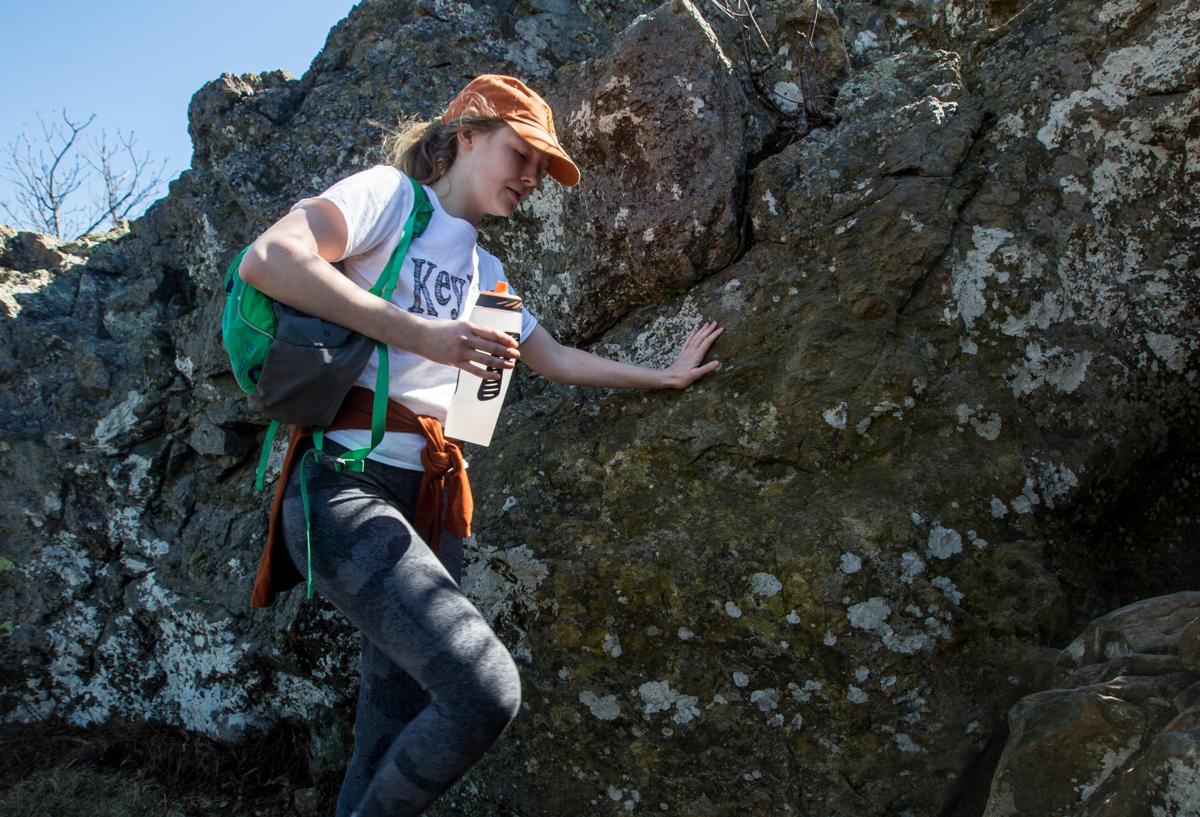 Rachael Ntenda, of Charlottesville, makes her way through the Bearfence Rock Scramble in the Shenandoah National Park in March. 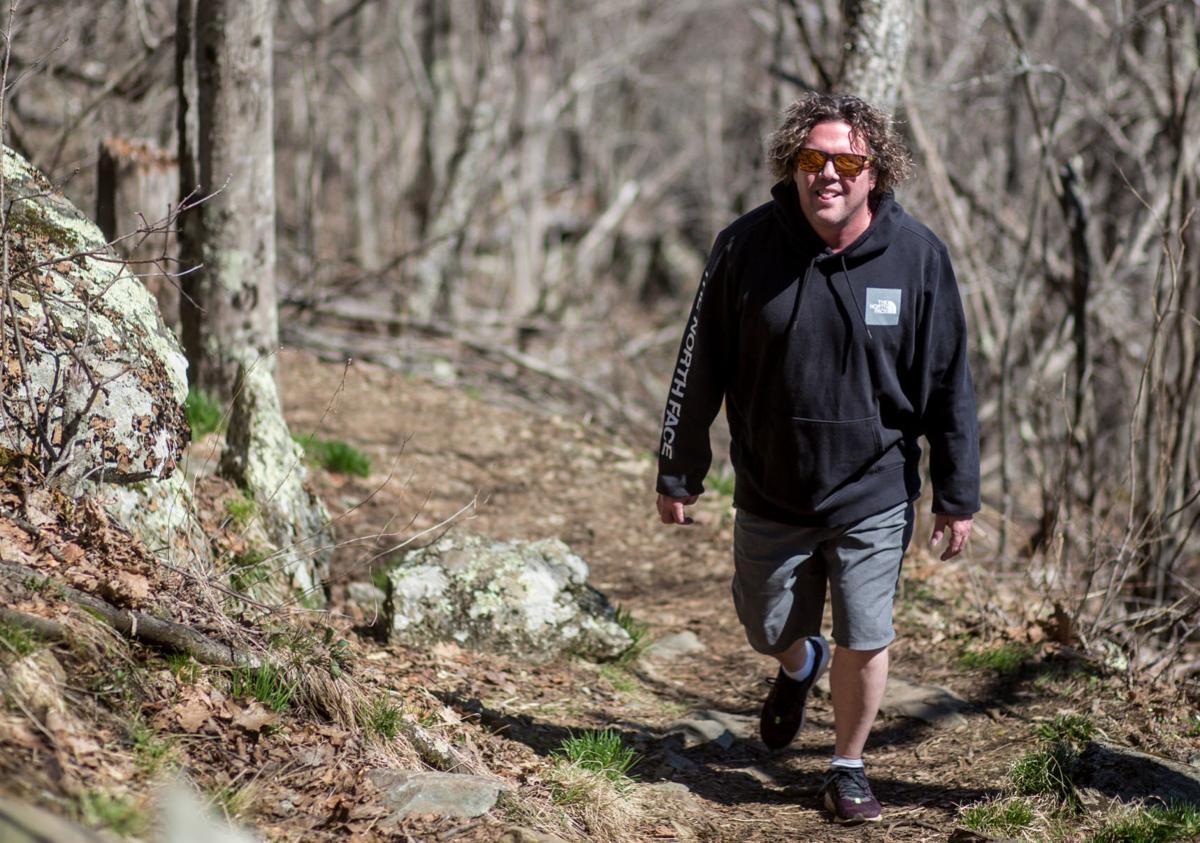 Chris Rogers, of Charlottesville, hikes along the trail on the Bearfence Rock Scramble in the Shenandoah National Park last week.

From left, Bentley leads Kristen Weaver and Bel Liscomb, of Luray, up into the next section along the Bearfence Rock Scramble in the Shenandoah National Park on Monday. Park officials have restricted access and closed facilities in response to the COVID-19 pandemic.

Rachael Ntenda, of Charlottesville, makes her way through the Bearfence Rock Scramble in the Shenandoah National Park in March.

Chris Rogers, of Charlottesville, hikes along the trail on the Bearfence Rock Scramble in the Shenandoah National Park last week.

Shenandoah National Park was on track for a record high of visitors in 2020, surpassing January visitation rates from the last 27 years. By the time the spring season was right around corner, the effects of COVID-19 came swooping in.

When Gov. Ralph Northam started urging people to stay at home to avoid the spread of COVID-19, Sally Hurlbert, management specialist for Shenandoah National Park, said attendance to the park was high. On Monday afternoon, only a handful of cars could be seen along Skyline Drive, soaking in the final hours before Northam issued a “stay-at-home” order.

As Shenandoah National Park continues to make changes amid COVID-19, it comes during a time where park attendance rises to more than 50,000 people.

“Our park begins to get a higher number of visitors in April, partly due to spring breaks in schools,” Hurlbert said. “The numbers steadily climb through May, June, July and August.”

During a time when Shenandoah National Park is expecting more visitors, popular trails are closed to the public.

A day later, all the backcountry was closed to camping until April 20 to be consistent with the Virginia State Parks, Hurlbert said. Overnight camping in the park was also shut down and all restrooms in the park were closed.

“Now that public restrooms are closed, [visitors] should rethink whether visiting the park is a good idea at this time,” she said. “If they choose to come, they should practice the social distancing and good sanitation techniques as outlined by the CDC.”

“All the trails in the park are beautiful and they can postpone their hike on a busy trail for a future visit,” she said.

Those who decided to visit Shenandoah National Park on Monday were greeted by an unfamiliar scene of empty entrance stations and park rangers nowhere to be found except for the occasional white United States Park Ranger vehicle driving along Skyline Drive.

The Big Meadows Visitor Center had an empty parking lot and the most noise coming from outside was the frequent creaks of trees being pushed by the wind.

Close to Big Meadows is one of the more popular trails, Bearfence Rock Scramble, that leads to a 360-degree view of the Shenandoah Valley.

Natalie Hansen and Rachel Ntenda, both of Charlottesville, braved the windy conditions Monday to get outside.

“We haven’t been on a hike for awhile and we wanted to get out and enjoy the beautiful creation,” Hansen said. “This is our first stop for the day.”

While the park remains open at this time, changes will be posted on the Shenandoah National Park website.

On Sunday, Shenandoah National Park announced there would be no open facilities until further notice.

Due to fee collections being suspended and campgrounds being closed, Hurlbert said there would “likely be an impact” to park revenue, but the magnitude of it won’t be known until they see how long the suspension and closure lasts.

Park projects will continue to happen, including construction of the Old Rag parking area.