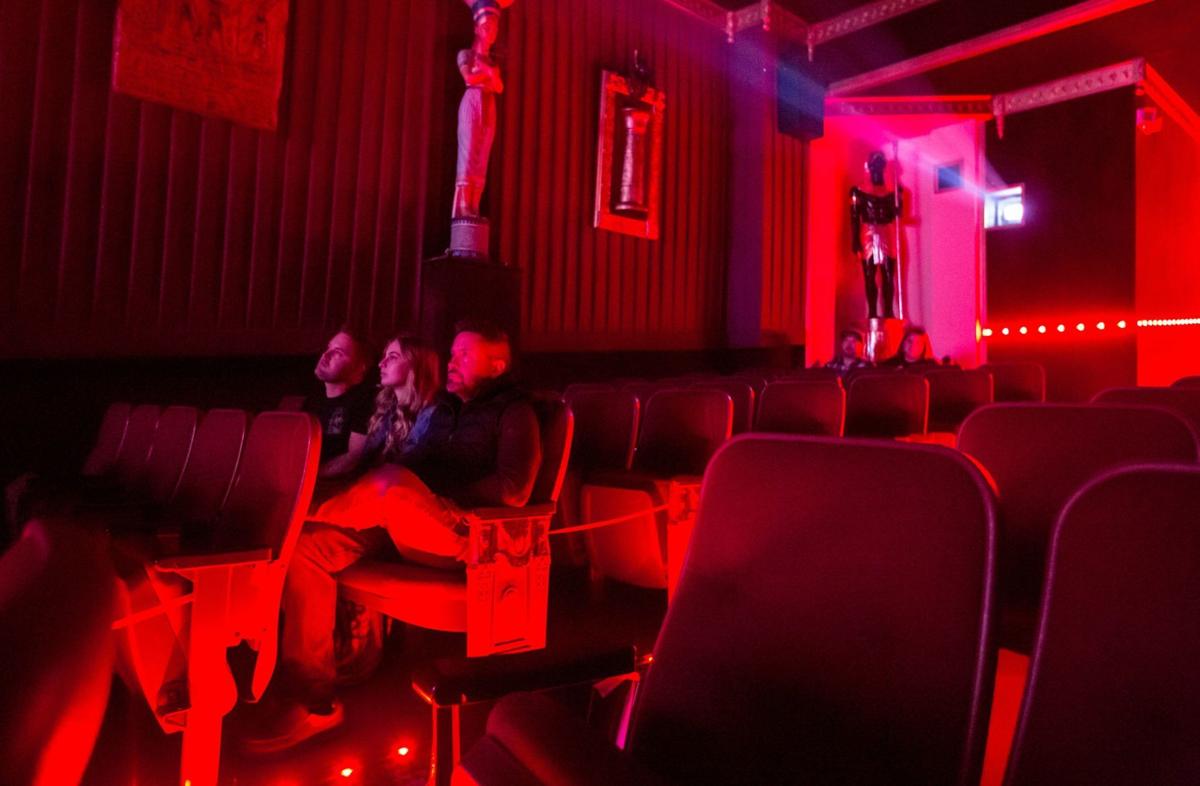 Moviegoers at the Page Theater watch “The Lost Boys” on Saturday evening. 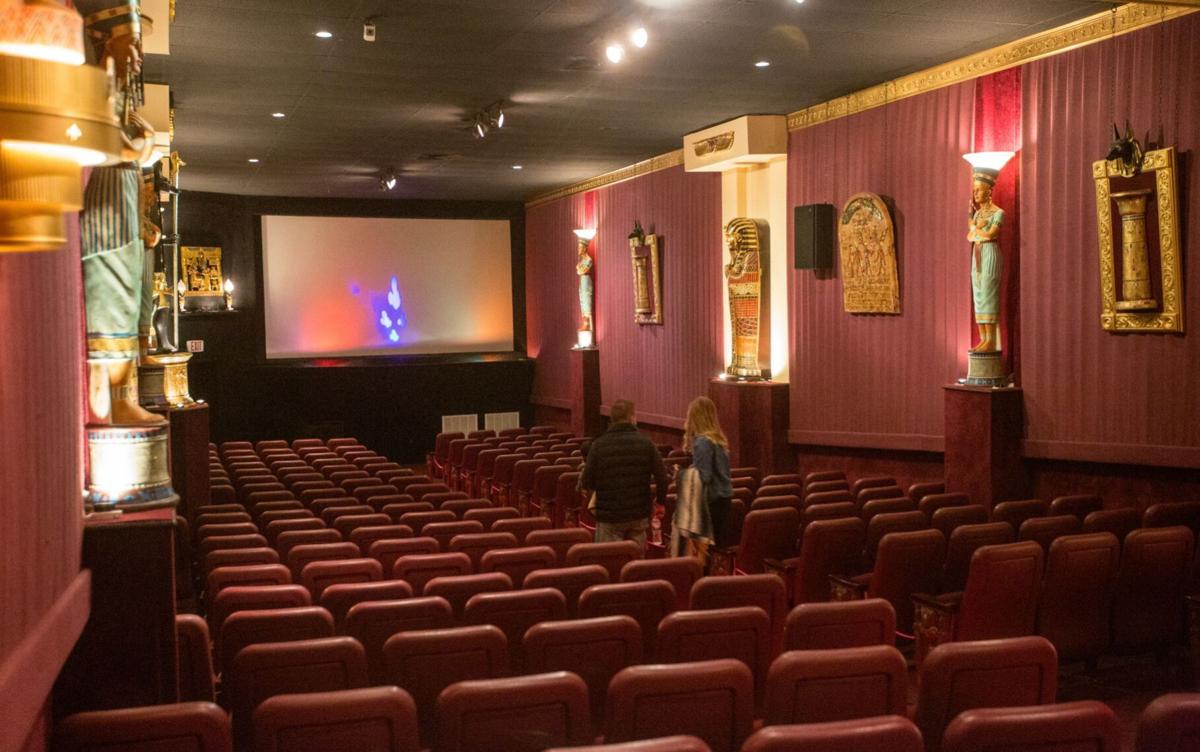 Moviegoers make their way to their seats Saturday evening at the Page Theater. 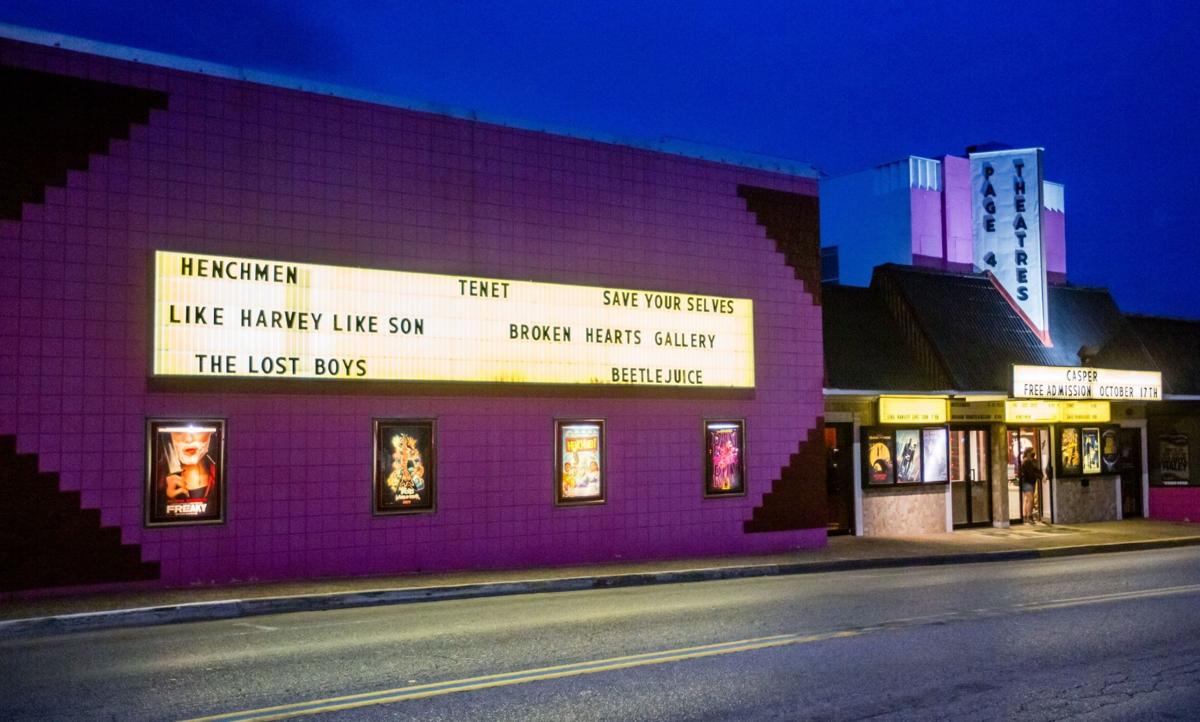 The Page Theater reopened under new management by the Hoke family after the death of its former owner, Jerry Spencer. 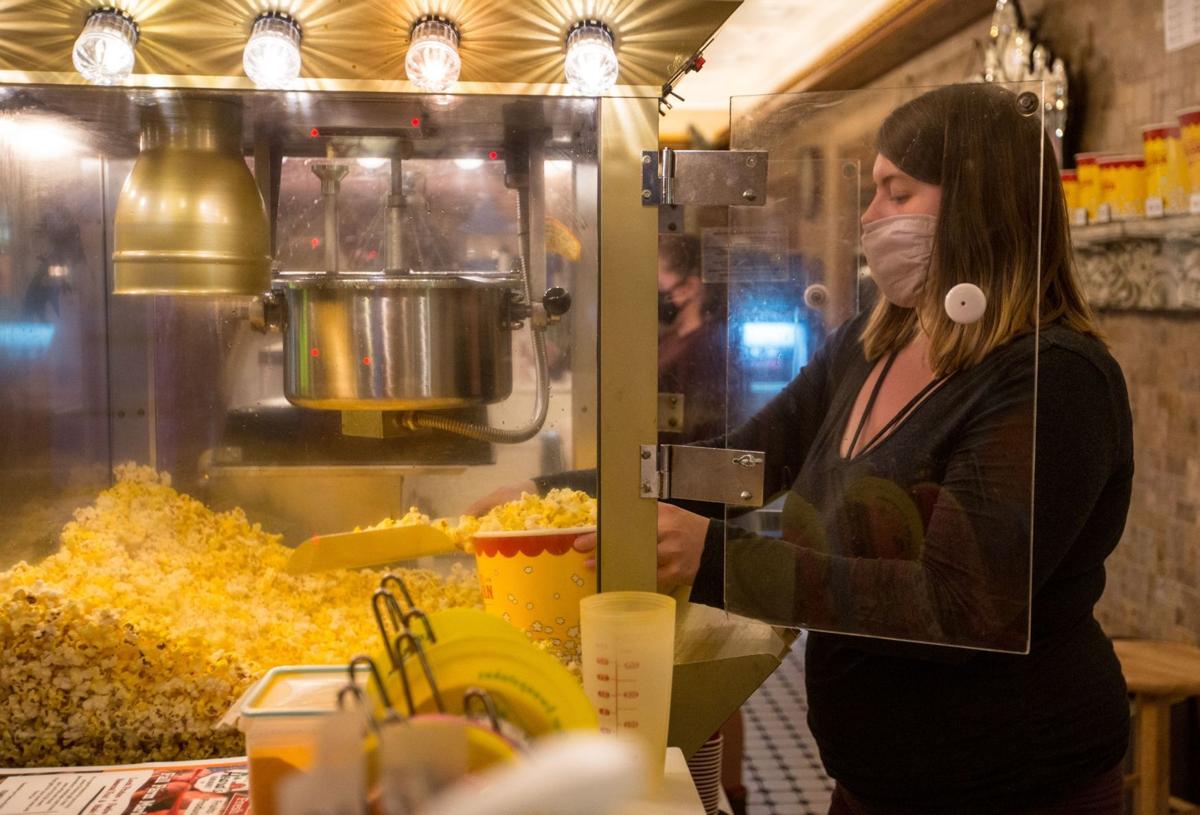 Moviegoers at the Page Theater watch “The Lost Boys” on Saturday evening.

Moviegoers make their way to their seats Saturday evening at the Page Theater.

The Page Theater reopened under new management by the Hoke family after the death of its former owner, Jerry Spencer.

Scarfing down furiously spicy wings and playing Madden alongside friends wasn’t the birthday party Landon Martlock exactly dreamed of. To ring in turning 16, Martlock’s family had tickets to watch his favorite football team, the Pittsburgh Steelers, storm Heinz Field, but the pandemic cut those dreams short.

Instead, Martlock found himself celebrating at the Sipe Center in Bridgewater surrounded by friends and family, failing to conquer the Buffalo Wild Wings Blazin’ Wing Challenge and watching 2019 horror film “Crawl” in an otherwise empty theater.

Renting out rooms for private events is a far cry from the primary purpose of movie theaters, but it’s a niche the cinema community is steadily providing in an effort to stay afloat while businesses buckle from lost patronage amid a global pandemic.

After opening last November with a 154-seat capacity inside the Holton Theater, Bridgewater’s Sipe Center should be crowded with first dates, girls’ night out and post-shift bonding. Instead, it’s simply one in a sea of theater halls that have been silent since March.

In small towns, movie theaters offer more than a big canvas for moving pictures; they often double as music and drama venues and rental spaces for large events.

Downtown Harrisonburg’s premier screening and performance venue, Court Square Theater, suspended operations in July for a one-year hiatus after a two-pronged hit: COVID-19 and a decrease in city funding. This year marked the theater’s 20-year anniversary of providing a space for community theater, traveling musicians and independent film amid other services.

Jenny Burden is the executive director of Arts Council of the Valley and a member of the Performing Arts Task Force working to study how the organization can better support performing arts locally. Burden said the task force is considering several options within three categories: maintain Court Square Theater, use a different facility or promote art sans facility.

“There are a ton of positive things about having a downtown [theater]. It becomes a pride of the city,” she said.

“It was a beloved part of the downtown scene for 20 years,” she said.

Readily worn-in plush seats. Butter- and salt-laden fingers. The sudden blindness of stepping outside after hours of staring at a screen. There’s hundreds of tiny details culminating in the movie theater experience, but many venues have shut off their screens for general viewing and are using the empty rooms for reserved events.

Privately renting theaters has become a staple in the cinema scene while classic red velvet seats remain empty of visitors. The Sipe Center is not hosting any live performances or shows for the remainder of the year, but is available for private party rentals for up to 77 people. In the rented space, parties are able to bring their own films or video games to enjoy projected on the big screen, and concessions are also available. Prior to each visit, all high-touch surfaces are sanitized and folks are asked to wear a mask unless eating or drinking.

Performance manager Amanda Saufley said the Sipe Center has seen an uptick in private parties for everything from birthdays to family reunions and wedding anniversaries, but the general consensus is the community is waiting eagerly for the return to general operations.

“Most of the feedback I’ve heard often is people really loved their experience at the Sipe Center before the pandemic happened, and they can’t wait for us to reopen,” Saufley said. “People are just excited to be coming back.”

Landon Martlock’s mother, Danielle, said it was an easy decision to use the money from the Steelers’ game to rent a space at the Sipe Center, which was a hit for the birthday boy and his guests.

“He loved it. Not sure he handled the spicy chicken wings well, but he otherwise loved it,” she said. “It’s totally worth it. It’s something unique to do.”

“Private rentals has really been our biggest element right now. That’s what people seem the most interested in, which is great,” he said.

To make patrons more comfortable, Visulite offers concession and ticket sales in advance online, and the point-of-sale does not allow seats to be purchased within 6 feet of each group.

Still, sales are nowhere near pre-pandemic operations, a problem worsened by studios not releasing new productions for viewing.

“It’s kinda a combination of people not feeling totally comfortable right now and studios not really releasing their bigger movies, so it’s been a bit of a double whammy,” Greenbaum said.

Drive-in theaters are timeless. From watching advertisements of dancing concessions to fiddling with temperamental dial-in audio, the experience of pulling in to watch a movie projected before a sea of cars is exceptional.

Nearby drive-in theaters such as Hull’s Drive-In in Lexington, The View Thru in Ruckersville and Warner’s Drive-In in Franklin, W.Va., are open for business to socially distant moviegoing from the safety of patron vehicles, but some outdoor venues have temporarily closed adjacent operations such as snack bars and playgrounds.

Luray’s movie venue, the pink Page Theater, was saved from closure last November when the Hoke family purchased the building following the previous owner’s death. At first, general manager Carlie Hoke said business was looking up as the town celebrated the preservation of its local theater. Page Theater was among the first theaters to reopen this year, but Hoke said many locals are unaware, and the theater has not made any money during the pandemic.

“COVID kind of hit us a little harder because we haven’t had any business being open,” Hoke said. “Even before the pandemic, there weren’t a ton of people in each theater anyways unless there was a huge movie coming out. Right now, it’s safer than going to the supermarket.”

Hoke is the sole full-time staffer, and the other workers are family. Inside theater rooms, every other row is blocked off and guests often have the space alone to themselves. Apart from occasional tourists stopping by to enjoy a film, Hoke said the theater has pivoted to offering several free admission community watch parties to attract an audience.

In retail, big-box chains have maintained steady operations throughout 2020 while several mom and pop shops have shuttered; whereas, local theaters have experienced a few advantages over nationwide movie halls.

Cineworld, parent company of Regal, announced operations are temporarily suspended across all 536 Regal theaters in the U.S., as of Oct. 8. During the summer, Regal theaters offered mobile ticket and concession purchases in advance. Moviegoers were required to wear masks while in the lobby, and auditoriums were held at 50% capacity.

According to a media statement, plans to resume operations are largely dependent on production studios releasing a slate of films.

Hoke said the same issue is dire for local theaters, but the decrease in new releases is accompanied by newfound grace from studios now sharing classic films with small complexes — a rarity before the pandemic.

“It’s hard to get classics anytime outside of COVID. … We have to keep new movies and make it relevant,” Hoke said. “There’s no way we can run these classics because they’re pretty bound by the companies.”

With highly anticipated movies like “Mulan” going directly to Disney+ or Sony’s “Connected” being delayed for release, Hoke said the main revenue generator for theaters, children’s movies, is unattainable, and she doesn’t expect an increase in business until production companies resume new movie releases.

“It’s up to the production companies. They have a lot of control over that. Right now, they’re not running movies, and that hurts theaters,” she said. “If there’s no new movies being released, there’s no push to go out.”

Studies early into the pandemic projected theaters would be one of the last businesses to reopen, but Greenbaum said he never imagined the shutdowns would stretch past eight weeks, and he’s become accustomed to affording flexibility with plans since.

“That kind of reality adjustment has had to take place and rethink the kind of trajectory. And even when we reopened, [it] wasn’t obviously opening to 100% capacity or even 100% of the business we had before, or anything close to it,” he said. “It’s been a constant rethinking, readjusting to the reality.”

The future of moviegoing remains hazy, but Greenbaum said he is confident in the industry’s resilient return once the outside world feels safe for guests again.