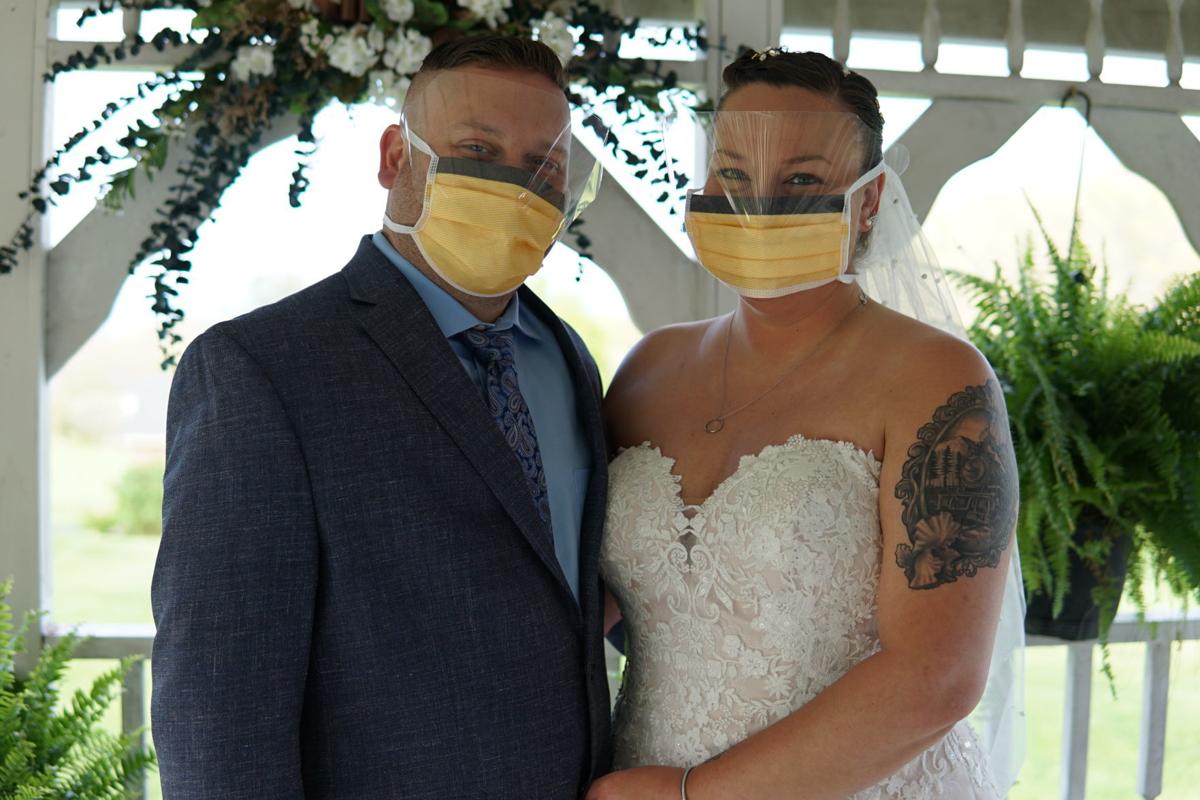 Dustin and Kristen Palmer decided to have a micro-wedding on May 4 in Troutsville during the pandemic and postpone plans for a larger celebration to the fall. 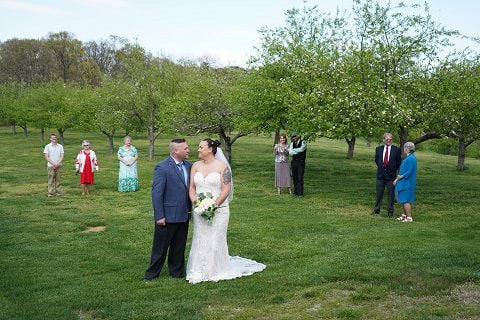 Joshua Gabrielson said couples choosing to have a smaller ceremony during the pandemic rather than postpone or cancel wedding plans all together have seemed calmer and happier without the stress of guests and ceremonies.

Dustin and Kristen Palmer decided to have a micro-wedding on May 4 in Troutsville during the pandemic and postpone plans for a larger celebration to the fall.

Joshua Gabrielson said couples choosing to have a smaller ceremony during the pandemic rather than postpone or cancel wedding plans all together have seemed calmer and happier without the stress of guests and ceremonies.

March would have marked the beginning of wedding season, but with loved ones under lockdown and restrictions cutting down group sizes from festival proportions to 10, many brides- and grooms-to-be have opted to postpone the celebration or settle for a ceremony sans fanfare.

Flowers, cakes and vows — the wedding industry is made up of hundreds of jobs that have been frozen in the past few months during the pandemic, but some newlyweds are taking the less conventional path and marrying anyway, challenging the traditional expectations of a wedding and threatening how businesses operate in the future.

While vineyards and churches have been off the books, couples have been able to wed virtually, streaming the ceremony through online channels, or mail-in marriage licenses through local judicial channels during the pandemic.

Rockingham County Circuit Court has issued 56 licenses during the month of May using an affidavit system, available since April, so couples can mail in the wedding application. Within the first 21 days of May last year, the court had comparatively issued 86 licenses. May is on track to pass February as the most lovey-dovey month this year, which saw 57 licenses issued in 2020, according to Chaz Haywood, clerk of the circuit court in Rockingham County and the City of Harrisonburg.

“That’s not something normally done at all unless you’re in jail, but we were able to adapt that affidavit system to make sure people can get their marriage license,” Haywood said.

Installation of windows has begun at the court office to provide greater ease of access for clients who want to maintain distance but file for a license. Haywood said people are still required to fill out the application for a marriage license online and doors will open on June 8.

“There’s a lot of offices that are still not doing marriage licenses. … We have a lot of folks actually coming here right now, getting married because we’re handling them,” Haywood said.

Joshua Gabrielson is a wedding photographer and researcher who shoots ceremonies for Wedding Photography and Films alongside his wife, Carole. For 21 years, Gabrielson has traversed the Mid-Atlantic region capturing heartfelt and grandiose moments in time, most frequently in Harrisonburg and Front Royal. This year, Wedding Photography and Films was recognized as Top Wedding Vendor for 2020 in Virginia Living.

While some life events like graduation ceremonies or birthday parties are a once-a-year occasion that can be rescheduled for a later date, weddings happen every day and can take months to iron out the details. Gabrielson said having to shift wedding plans for after the pandemic is causing a strain on the industry, and he predicts some businesses will not survive.

“We have several months of couples who’ve changed dates and asked for refunds. All these variables have taken place, so it wouldn’t surprise me if the industry shrunk,” Gabrielson said. “Vendors out there doing 50, 60 weddings a year aren’t going to be able to do 50 or 60 next year because the 2020 brides are eating into the 2021 time frame, so next year is going to be hard for all vendors.”

For clients who select to have a micro-wedding, a half-day affair with less than 50 guests, and host a formal reception at a later date, Wedding Photography and Films has offered free portraits for the intimate ceremony. Gabrielson said he began seeing a surge in the popularity of micro-weddings in March and expects couples to fall back on the option to cut costs after isolation measures are reduced.

Of the two ceremonies he has photographed during the pandemic, while stripped of some classic fun and traditions, Gabrielson said the celebrations have felt more authentically joyous without the stress of a swarm of guests and an itinerary to run through.

Before wedding bells can toll, months of preparation have to go into the big day — some chores more glamorous than others. At Amanda’s Touch and Bridal Impressions, operations manager Kristie Guyer oversees fittings of frills and lace, pearls and diamonds — the tiny details that can turn a simple ceremony into someone’s dream day.

Guyer said the pandemic has forced many brides to reconsider and weigh the importance of certain wedding embellishment as restrictions put a wrinkle in their plans, but the overall consensus from bridal parties is to delay the big day when allowed.

“A lot of our brides are just still holding out that they’ll be able to do that and planning everything as normal. … This is supposed to be the biggest day of her life, and is she going to settle to have 10 people there, or is she going to move the date and have the wedding she really wants?” Guyer said. “All the feedback from our brides has been really good. The community is really coming together and working things out to make sure that these brides are going to get what they deserve.”

Gabrielson said the constant communication and feedback between wedding industry vendors has strengthened ties that will push the industry forward after the pandemic.

“It’s that question-answer kind of thing, and it’s nice because I have built some closer relationships with competitors of mine,” he said. “It’s been nice seeing the closeness behind doors. Just because we’re competitions doesn’t mean that we can’t be good friends and rely on one another and help each other out in this time.”

For couples who have tied the knot and taken the leap to honeymooning at home every day, relationship experts advise being completely honest and open with one another so tensions are not mistaken and built up to larger issues.

Dana Blauch is a psychotherapist in Harrisonburg who specializes in emotionally focused therapy, an experiential method based on the science of attachment and recognizing threats to emotional safety, distress. She said her number of couple therapy sessions has fallen, which she contributes to people’s disinterest in tele-therapy, but isolating with a loved one is a brutally honest time that can expose issues between couples or bring them closer than ever.

“The hallmarks of all relationships to be successful, they need safety and security. … For couples where that is not working so well, where there is more conflict or more insecurity, for those couples, times like these are a wake-up call as to whether or not they can make it or whether they need to seek outside help,” Blauch said.

Blauch said her biggest concern for couples is that each partner resorts to individual coping strategies that conflict. Instead, she said, couples need to address problems together to find the dynamic of comfort, support and safety to break out of any negative patterns.

“People are finding we all develop our own strategies for managing stress. Some of us tend to reach out more for others when we’re stressed, some of us tend to withdraw and retreat more, and so our individual coping strategies are being taxed maybe a little bit more in this as couples because then trying to blend those together,” Blauch said. “Any time couples can start to sort of step back and see the pattern is the enemy and not their partner, it’s a lot more helpful.”

Pastor Steve Hay of Asbury United Methodist Church often meets with couples before the big day for premarital counseling. He said he focuses his discussion with couples on navigating the “potholes in life” that may arise during a marriage.

Starting this Sunday, Asbury United Methodist is also conducting a six-part online series called “Keys to Happily Ever After,” dedicated to analyzing relationships during the quarantine.

Hay said the largest obstacles in any relationship stems from complacency and laziness in communication, and isolation can escalate the problems and tensions between people trapped under the same roof.

“As a pastor, I’ve asked myself ‘What keeps people awake at night? Why are they laying in bed staring at the ceiling, worried?’ There are three things: one is money, two is the kids and three is the marriage. So, I think those three are always important topics, but as I said, quarantine may amp up the need to be intentional about improving those relationships,” Hay said. “To be intentional about the relationship and not just let it drift. The quality of communications is crucial.”