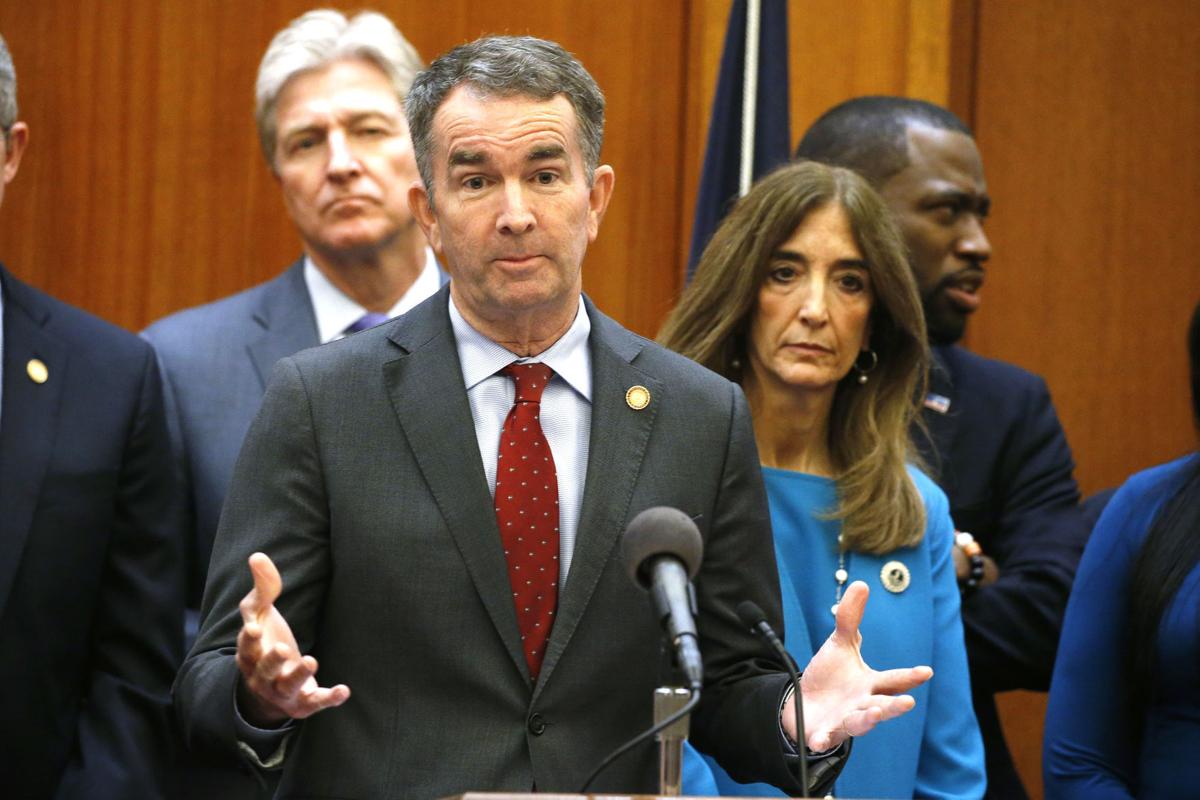 Virginia Gov. Ralph Northam, front, gestures during a news conference as House speaker Eileen Filler-Corn, right, and Secretary of Public safety Brian Moran, left, look on at the Capitol in March in Richmond.

Since Gov. Ralph Northam declared a state of emergency due to COVID-19 on March 12, he has had the ability to issue executive orders as director of emergency management for 141 days.

Issuing executive orders comes with the governor’s powers and duties and under the Code of Virginia. Orders can last through June following the next regular General Assembly session — a stipulation Del. Tony Wilt, R-Broadway, is seeking to address.

On July 17, Northam announced he would call the General Assembly into a special session for the purpose of adopting a budget “based on the revised revenue forecast in light of the ongoing COVID-19 pandemic,” as well propose additional criminal justice and policing reform. The special session will be held on Aug. 18, and as of Thursday, nine pieces of legislation are on the docket.

“It’s not a Republican or Democrat thing; it’s anyone,” Wilt said during an interview Thursday.

Wilt filed an amendment to the state’s Constitution Wednesday for the special session that would grant the General Assembly oversight and authority over certain emergency orders issued by the governor. Specifically, it would require any emergency executive order to be approved by the General Assembly if a state of emergency continues for more than 45 days.

“What it does is if the governor declares us in a state of emergency, it would allow him to declare it up to 45 days. If he wants it to go beyond 45 days, he has to call a special session of the General Assembly,” Wilt said. “In the General Assembly, we would allow up to that [45 days]. ... We would look at it and decide how we would want to proceed up to the time he is asking for.”

If the 45-day period does not lead into a General Assembly session, Wilt said the governor would need to call for a special session to address the emergency declaration.

“We are at the governor’s discretion. We are at his beck and call, so to speak,” he said.

Wilt added that governors are typically sensitive to a legislator’s schedule when it comes to calling for a special session, but it usually depends on the subject matter.

“Here we are talking about an emergency declaration, so the assumption is this is something very important and it may be a short call, but generally the governor is going to put it out there far enough ahead people can plan, change their schedules and so forth,” he said. “[An emergency declaration] takes precedent.”

The proposed legislation would not give the General Assembly the “license” to extend a state of emergency longer than the governor’s order, he said, adding that the amendment has “checks on each side.”

“There really is nothing there that says it can’t be indefinite,” he said. “I feel really strongly that there has to be some kind of a check and balance there to address that issue.”

For the amendment to be adopted, however, it will need to go through a lengthy process that would last until 2022.

Wilt said he was OK with the timeline of events needed to take place to change the Constitution, adding that the change is necessary due to possible legal challenges and hurdles the regular legislation could face in the future.

“While this COVID thing was kind of impetus to cause me to look at the overall issue, I am just looking at the process,” he said.

The bill would limit a governor’s emergency executive order to 30 days instead of Wilt’s proposed 45-day period. If the General Assembly does not take action, the governor would need to reissue the order relating to the emergency. The order could not be reissued following the second 30-day period.

Wilt said in a press release that he hopes his fellow legislators would agree that they must guard against future governors who could use a similar situation as the COVID-19 pandemic to unnecessarily overreach without limitations.

Giving baby killer a blank check, what a concept. As we see nationwide demonkkkrats turn their areas into third world countries. Does anyone think this idiot should have a voice. Look at Minneanapolis and other demonkkkrat held cities. Last year 13 blacks died under police, they have killed double that under antifa so far , more to come. Well done LOSERS.