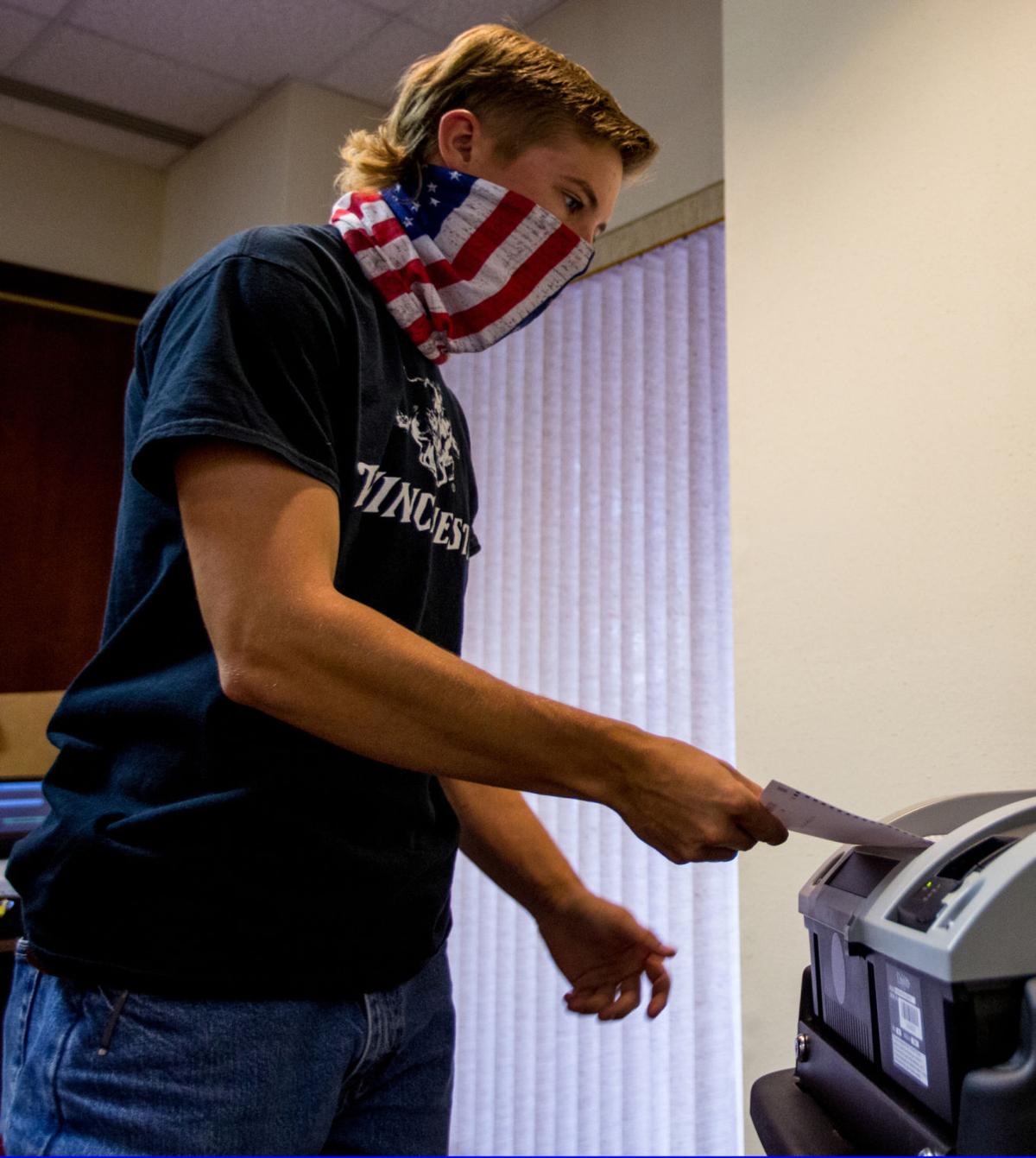 Jacob Flick, of Singers Glen, casts his vote at the Rockingham County Government Center on Friday. 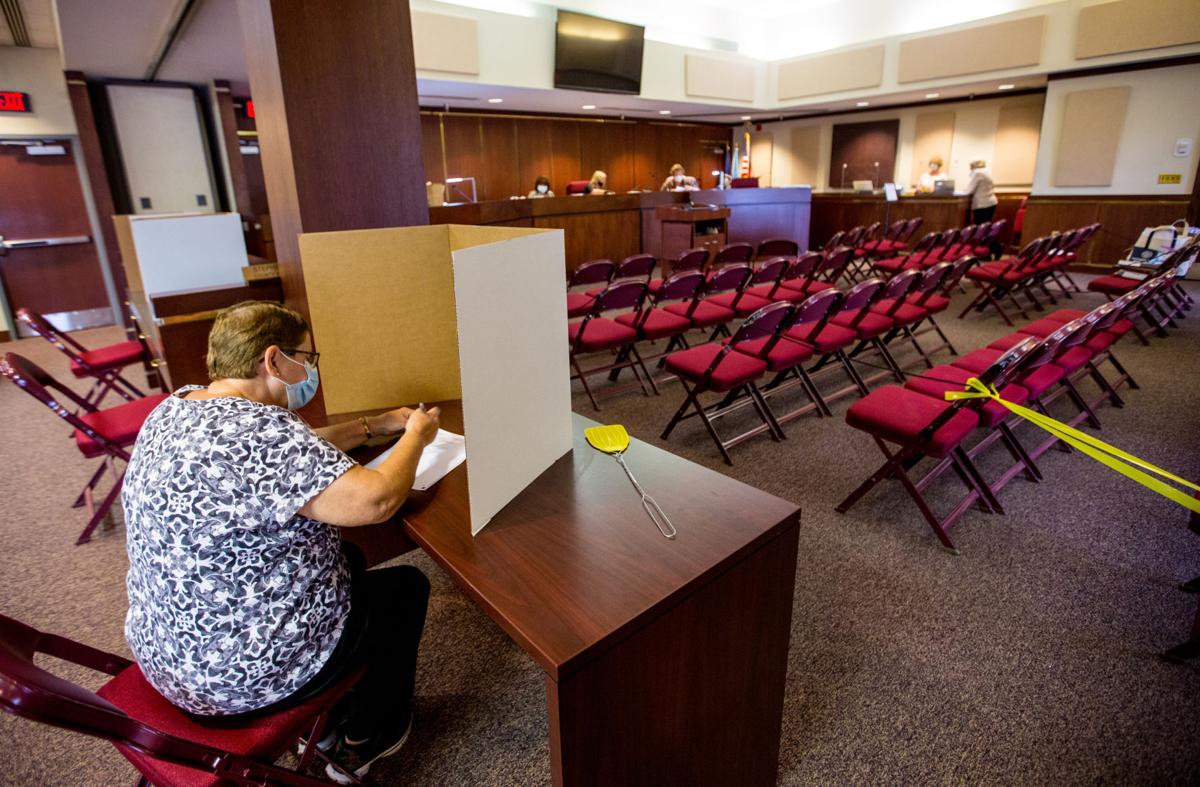 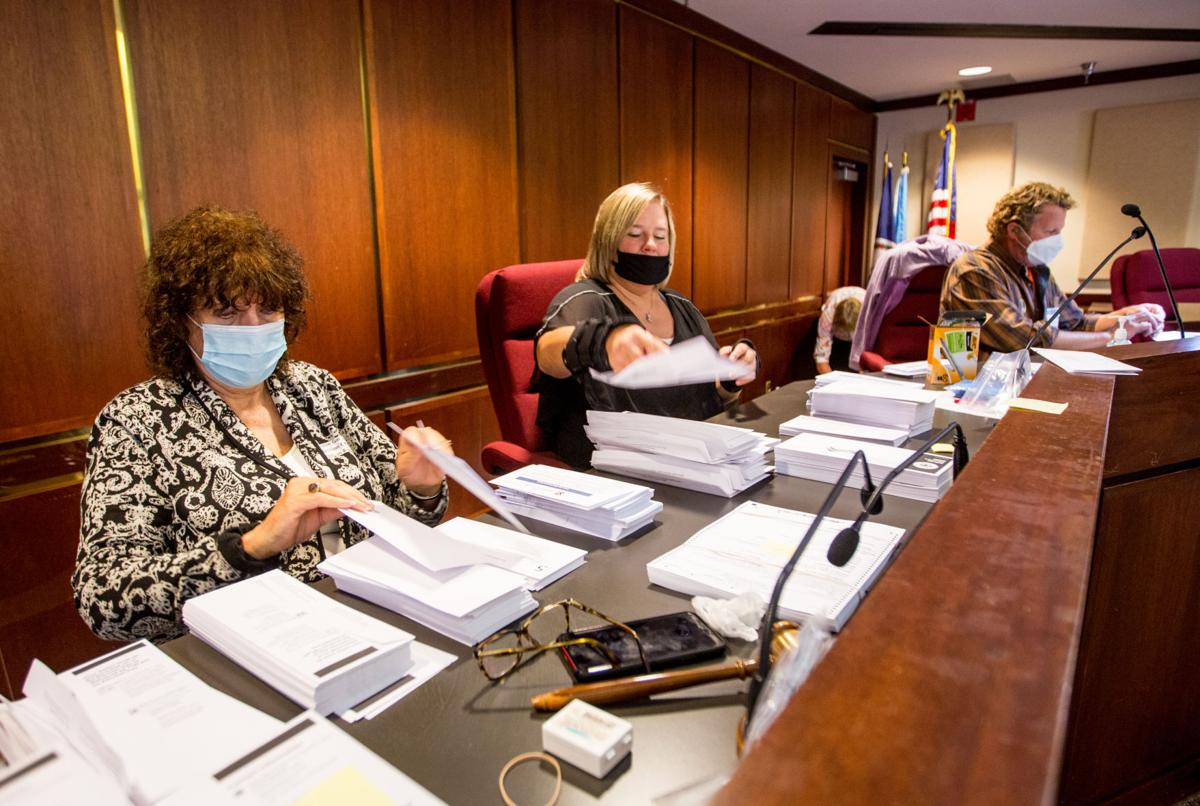 Belen Yoder, of Harrisonburg, casts her vote at City Hall on Sept. 18.

Jacob Flick, of Singers Glen, casts his vote at the Rockingham County Government Center on Friday.

Inside the Rockingham County Voter Registrar office, the sound of ringing phones could be heard from down the hall as voters called in to ask questions early Friday morning.

It was the first day Virginians could vote early in-person and by mid-morning, 67 county residents and 81 city residents had cast their ballot and walked away with a voting sticker 46 days before the November election.

“This is the earliest I’ve ever voted,” said one city resident after casting his ballot around 11:30 a.m.

After the first day was over, the final vote count was 224 in Rockingham County and roughly 180 in Harrisonburg.

As of Thursday evening, 25,450 city residents and 53,419 county residents were registered to vote in the upcoming election, according to data provided by both Bill Ney, spokesman and vice chair of the Harrisonburg Electoral Board, and Lisa Gooden, director of elections for Rockingham County.

Compared to the number of registered voters and Friday’s turnout, 0.42% of county voters and 0.70% of city voters cast a ballot.

Early in-person voting locations opened at 8 a.m. Friday and both city and county officials said there were voters waiting to be the first to cast a ballot.

Ney said when he arrived to City Hall at 7:30 a.m., there was one person already waiting to vote.

“They wanted to be the first person to vote,” he said.

By 8 a.m., both city and county polling locations had a handful of voters ready to cast their ballots, but turnout would remain steady throughout the day.

Betty Owens, chief officer for the county’s polling location, said the morning was slow, but picked up toward the afternoon. Owens admitted that she expected more people to show up for the first day of early in-person voting, but anticipated it to pick up.

“With elections you never know when people will show up,” she said.

Rosemarie Palmer and Charlie Raisner, both of Bridgewater, sported voting stickers after casting their ballots at the Rockingham County Administration Center.

Palmer and Raisner said they both had voted absentee before and relatively knew what to expect this year.

“[Early in-person voting] is easier this way,” Palmer said. “It was very well organized and quick and easy to do.”

Palmer and Raisner are residents of Bridgewater Retirement Community and said it would be easy to bring a few vans filled with other residents to come and vote early.

“I definitely would recommend voting early,” Palmer said. “And be aware of the [Virginia Constitutional] amendments.”

Palmer and Raisner said they were unaware of the two constitutional amendments included on the ballot and had to read a pamphlet provided by the county before casting their vote.

The first amendment relates to establishing a redistricting commission consisting of eight members of the Virginia General Assembly and eight citizens of the commonwealth. The commission would be responsible for drawing the congressional and state legislative districts.

The second amendment asks if an automobile or pickup truck owned and used by or for a veteran of the United States armed forces or Virginia National Guard who has 100% service-connected, permanent and total disability should be free from state and local taxation.

During the afternoon, voter turnout had increased slightly with 138 county residents and 114 city residents casting a ballot before 1:30 p.m. By early evening, the county received 215 ballots and city received 176 ballots before 4:30 p.m.

Oct. 13 is the last day to register to vote in the November election, Gooden said.

Who, And What's, On The Ballot?