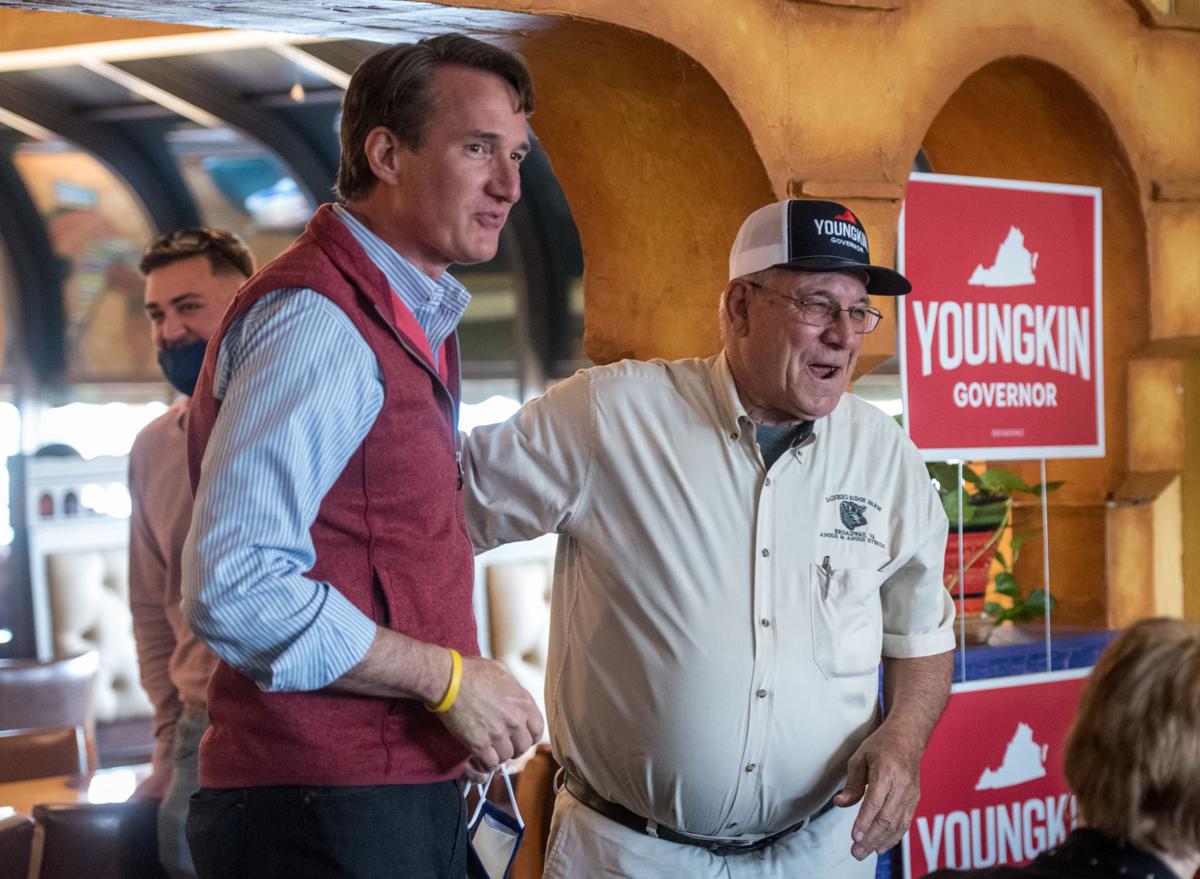 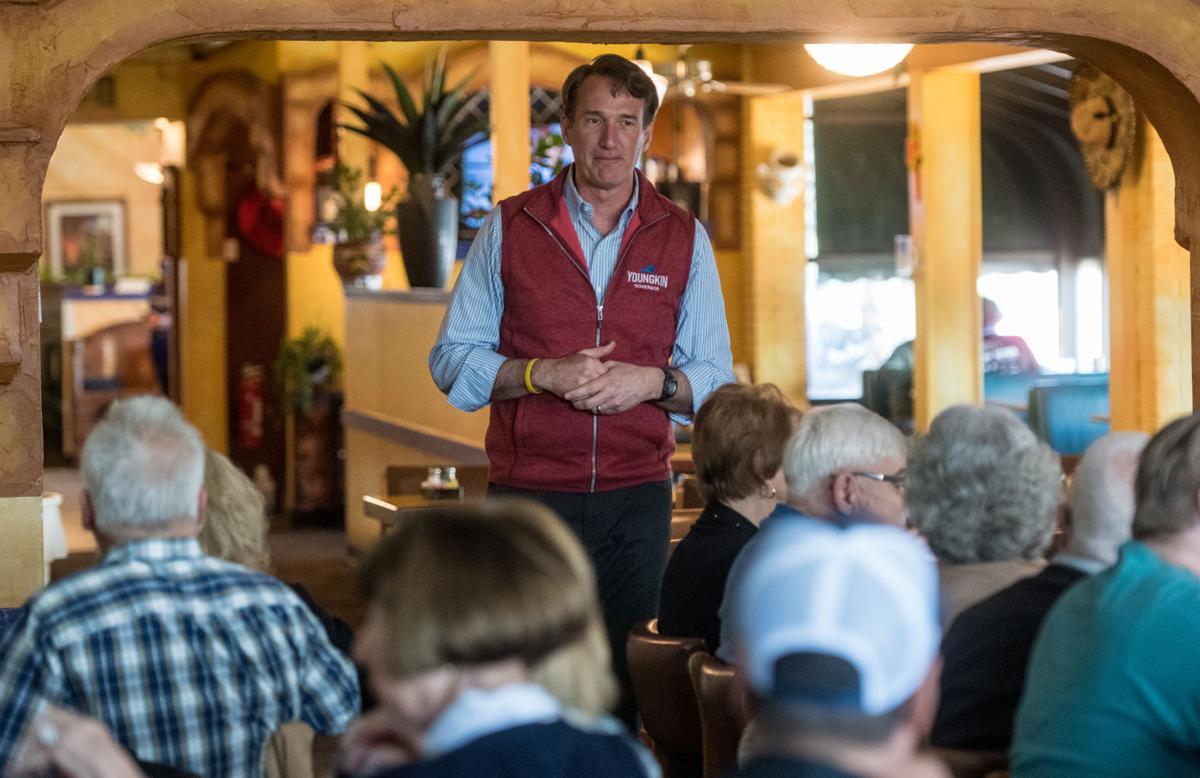 Republican gubernatorial hopeful Glenn Youngkin speaks with supporters during an event at El Charro in Harrisonburg on Friday.

Republican gubernatorial hopeful Glenn Youngkin speaks with supporters during an event at El Charro in Harrisonburg on Friday.

With 21 days before the Republican convention, Glenn Youngkin, a candidate in the contest for November’s gubernatorial race, met with voters at El Charro on Friday.

The event came a day after one of Youngkin’s opponents, Pete Snyder, held a similar event outside Bridgewater on Thursday.

Youngkin, who retired as co-chief executive of Washington-based global investment firm The Carlyle Group in order to run for governor, received a warm welcome from District 1 Supervisor Dewey Ritchie upon his arrival.

Ritchie told attendees Youngkin will be a “good governor for Virginia,” adding that he was approachable and took the time to meet with Ritchie personally in Broadway.

After the echoes of applause and fair-share of greetings were dispersed, Youngkin spoke to voters about the issues he is running on and how he will change Virginia by reopening businesses, schools and places of worship on his first day as governor.

“We are going to rescue this great Commonwealth of Virginia,” he said.

He told voters about the day he told his wife, Suzanne, he was going to quit his job at The Carlyle Group to run in the gubernatorial race. Youngkin said he felt a calling to do a different line of work, adding that his wife questioned if he was having a midlife crisis.

Youngkin replied: “Not a midlife crisis, but a Virginia crisis.”

Since announcing his campaign in January, Youngkin said he heard from thousands of Virginians voicing concerns over current state leadership and how they wanted a better Virginia.

The Associated Press reported on Jan. 27 that Republicans haven’t won a statewide race in Virginia in more than a decade, which was one of Youngkin’s talking points Friday.

“This is going to be one team, not three individuals,” he said when referencing the governor, lieutenant governor and attorney general races.

There are six Republican candidates and seven Democratic candidates for lieutenant governor, the Virginia Public Access Project reports. In the attorney general’s race, there are four Republicans and two Democrats, including incumbent Mark Herring.

Youngkin was asked by an attendee of the event which attorney general he would support. Youngkin said he was still learning about all the candidates.

“I think they all have unique skills and capabilities,” he said.

If elected as Virginia’s next governor, Youngkin said he will stand up for constitutional rights, maintain his anti-abortion values, stand up for law enforcement officers and address election integrity.

Youngkin took a portion of his time in Harrisonburg to talk about education and how children in public schools have been “damaged academically, emotionally” by schools closing to in-person learning due to the COVID-19 pandemic.

“Our children will never have to suffer like they have this past year,” he said.

For his plans with election integrity, Youngkin said he will make the Virginia Department of Elections an independent office, bring back the repealed requirement that voters show a photo ID prior to casting a ballot and require voting logs to be updated once a month.

According to the National Conference of State Legislatures’ website, the Virginia State Board of elections is required to conduct a match of the state’s registered voter lists with the list of deceased persons maintained by the Social Security Administration on or before Oct. 1.

Following his speech, Youngkin took questions from attendees — one of which asked for his opinion on removing statues that honor Confederate leaders.

“I believe we should absolutely teach all history,” he said.

Youngkin also addressed comments on recent political attacks claiming he was involved with his former employers paying Hillary Clinton $200,000 in speaking fees and told his former employees to make contributions to the Southern Poverty Law Center.

Youngkin said he was told early in his campaign that if he was winning the race, the attacks would come.

Youngkin wrapped the event by telling attendees that they must keep fighting to have a Republican in office come November.

“I have one gear on and we’re going forward to win,” he said. “This is not about me, it’s about us.”

The Republican convention is May 8 and will be held at multiple locations across the state.

A good question to ask Mr. Youngkin publically or on the record is whether he would implement mandatory e-Verify in Virginia and what his position is on the H1b green card scam that has been a factor in turning Virginia reliably “blue”. Based on his answer we would know then who it is he intends to serve.