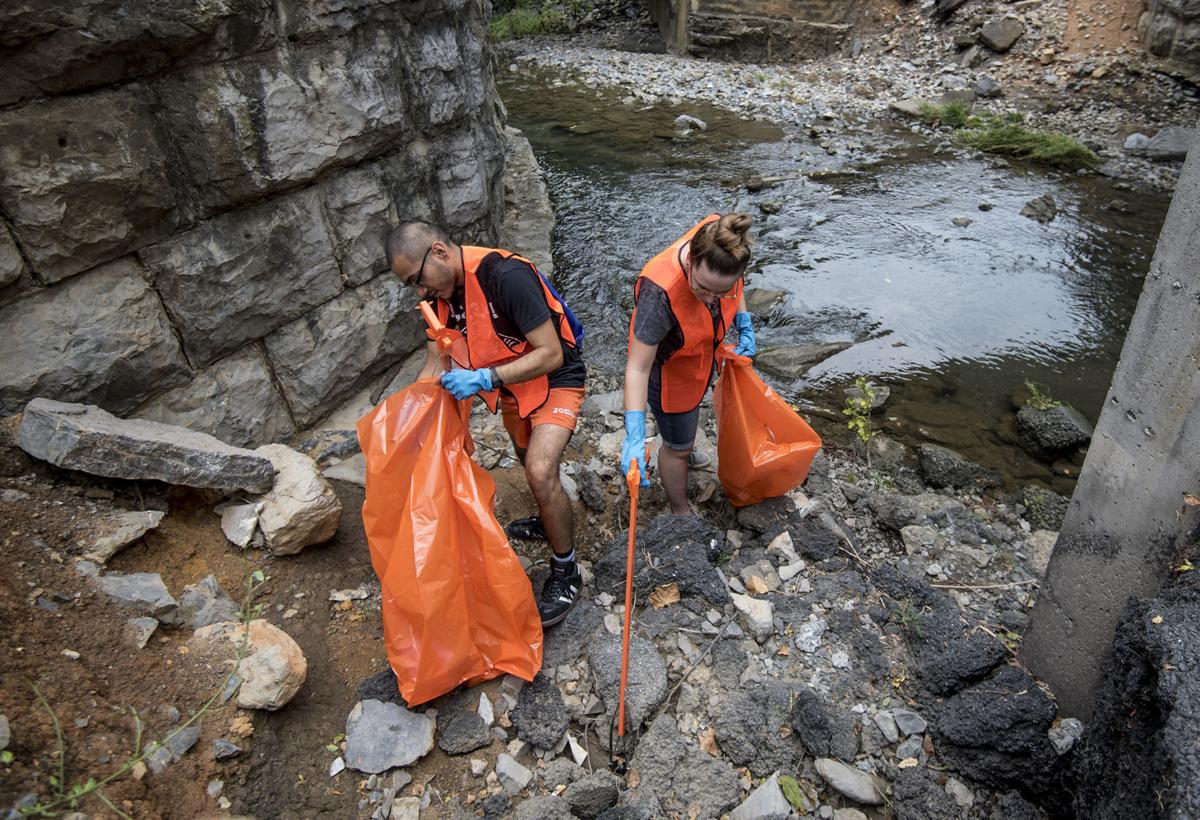 Jossi Diaz (left) and Mackenzie Jenkins, both of Harrisonburg, pick up trash from Blacks Run in 2018. 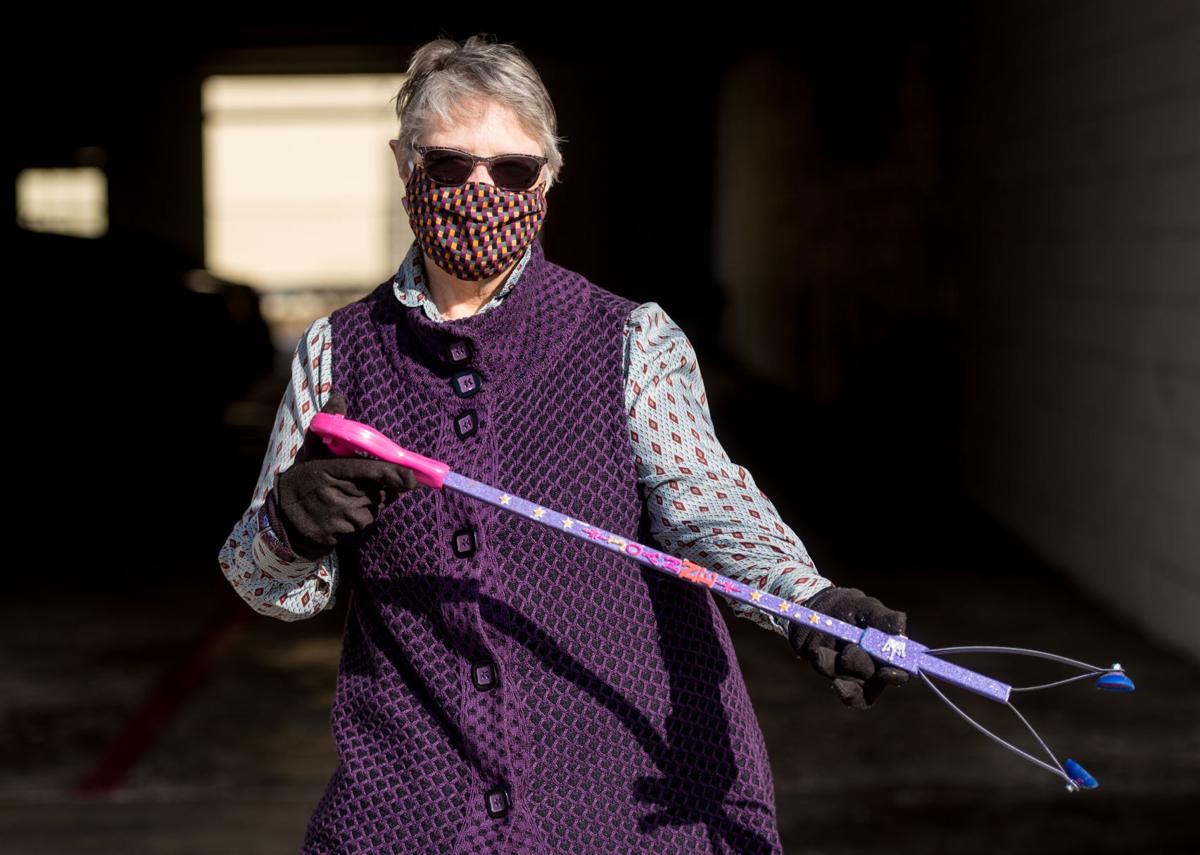 Jo Anne St. Clair poses for a photo outside her apartment on Rock Street on Tuesday. “When people see that an area is trashy, they’re like, ‘Oh, well people don’t really care about this neighborhood or this community,’” she says. “When they see it’s not trashy, it’s like, ‘Oh, well maybe I shouldn’t drop this chewing gum wrapper or throw away my cup from McDonald’s.’ ... People started taking more care of their neighborhood.”

Jo Anne St. Clair picks up trash around her apartment on Rock Street on Tuesday. She was dubbed the “Trash Queen of Southside Columbus” before she moved to Virginia when she retired.

Jossi Diaz (left) and Mackenzie Jenkins, both of Harrisonburg, pick up trash from Blacks Run in 2018.

Jo Anne St. Clair poses for a photo outside her apartment on Rock Street on Tuesday. “When people see that an area is trashy, they’re like, ‘Oh, well people don’t really care about this neighborhood or this community,’” she says. “When they see it’s not trashy, it’s like, ‘Oh, well maybe I shouldn’t drop this chewing gum wrapper or throw away my cup from McDonald’s.’ ... People started taking more care of their neighborhood.”

A-listers such as Angelina Jolie and Elton John are among a collection of celebrities honored with royal titles granted for charity work and contributions to the fine arts, but there is one activist in Harrisonburg with her own royal honors.

With a spunky, star-studded picker to prove it, Jo Anne St. Clair proudly wears the title of Trash Queen for her lifelong dedication to environmental activism and litter pick-up.

Before moving to Harrisonburg, St. Clair lived in Columbus, Ohio, where she spent over 15 years organizing and participating in trash clean ups, so the community improvement program Keep Columbus Beautiful crowned St. Clair as the Trash Queen of Southside Columbus. As chair of Climate Action Alliance of the Valley (CAAV), St. Clair continues to expand and educate environmental initiatives in the Shenandoah Valley. On Friday, Harrisonburg is invited to clean the streets alongside St. Clair for Green Friday, an eco-friendly twist on a consumerist tradition.

Rather than spending the Friday after Thanksgiving lining outside a big-box retailer tussling with customers for the hottest deals, CAAV and Earth Day Every Day of Harrisonburg VA (EDED) are co-hosting Harrisonburg’s first Green Friday.

St. Clair said the practice of picking up trash along the street was ingrained in her from a young age, but her years collecting trash in Columbus taught her the greater value in encouraging others to pick up trash.

“When people see that an area is trashy, they’re like, ‘Oh, well people don’t really care about this neighborhood or this community,’” she said. “When they see it’s not trashy, it’s like, ‘Oh, well maybe I shouldn’t drop this chewing gum wrapper or throw away my cup from McDonalds.’ ... People started taking more care of their neighborhood.”

EDED member Andy Sams proposed the idea for Harrisonburg’s first Green Friday after producing a “One Minute for Earth” short film and music video for the organization as a creative and interactive way to get out and support the downtown district.

Karen Lee is a committee member of CAAV and leadership team member for EDED and said Green Friday was inspired by the cancellation of this year’s Blacks Run and Downtown Clean Up Day and the desire to share in community building alongside neighbors.

“Let’s spiff up for Small Business Saturday. … Of course you want to help your neighbors because your neighbors own those places and work there,” Lee said. “We especially want to support local businesses because, from the environmental standpoint, you’re not expending the fossil fuel you would for transportation of items, and also you’re more sure of their safety [practices].”

Harrisonburg Public Works is donating clean-up supplies, signage and safety vests to volunteers for the event.

Each year, the department hosts a Blacks Run and Downtown Clean Up Day on Arbor Day and relies on Adopt-A-Stream and Adopt-A-Street programs to reduce pollution. Support service manager Harsit Patel said the COVID-19 pandemic was responsible for the cancellation of this year’s Clean Up Day and scaled back the street and stream adoption programs, so the department has relied on its street sweeping program to curb pollution.

“The tonnages we collect in Adopt-A-Street programs and Blacks Run Clean Up every year has been fairly consistent. Blacks Run’s clean up averages two or three tons every year,” Patel said. “The need is there.”

St. Clair said litter on side streets are likely leftovers from thoughtless drivers, which is a harder challenge to eliminate than pedestrian trash, but she’s optimistic that spreading awareness of clean-up campaigns will win over time.

“People are driving and throw whatever they’re getting rid of out the car. Eventually, maybe people will quit doing that, but until they do, this is a way to get people’s attention and encourage them not to discard trash,” she said.

Whether walking to the post office or store, St. Clair normally finds a piece of rubbish or two for trash collection, but she has been out of commission for the past few months. Back in September, she broke her ankle in three places and went to a rehabilitation center for 22 days to heal.

St. Clair said Green Friday will be the Trash Queen’s “first soiree back,” but she hopes the event continues as an annual or biannual event.

“It’s something people can do as a group while they are socially distancing or with their family, and I think it’s a good experience for people,” St. Clair said. “It helps build a little bit of camaraderie, too. We’re all in this together.”

Lee said each group of volunteers will receive a white bag for recycling, an orange bag for trash and a map outlining certain areas within walking distance around downtown in need of trash pick up, such as Blacks Run and alongside the railroad tracks, so people can spread out and altogether tackle a wider area.

Groups can stay out and clean for as long as they like, but Lee said volunteers can return with their gathered trash at 3 p.m. and find out if they’ve won a prize.

Prizes will be awarded by random number selection and include $10 gift cards to Bring Your Own, a zero-waste shop in Agora Downtown Market, and eco-friendly toothbrushes.

Ryan Woolsey, a friend of St. Clair, is also sewing green face masks for the occasion to hand out for free.

There is no pre-registration or fee to participate in Green Friday.

Interested parties can meet members of CAAV and EDED at a table outside Pale Fire Brewing Company at 217 N. Liberty St. from 1 to 3 p.m. on Friday to be entered for the prize giveaways, gather clean up supplies and embark on a green note to end the holiday week.

Seems we have a lot of "clean up" efforts here. Has anybody thought of and effort to keep the place clean?