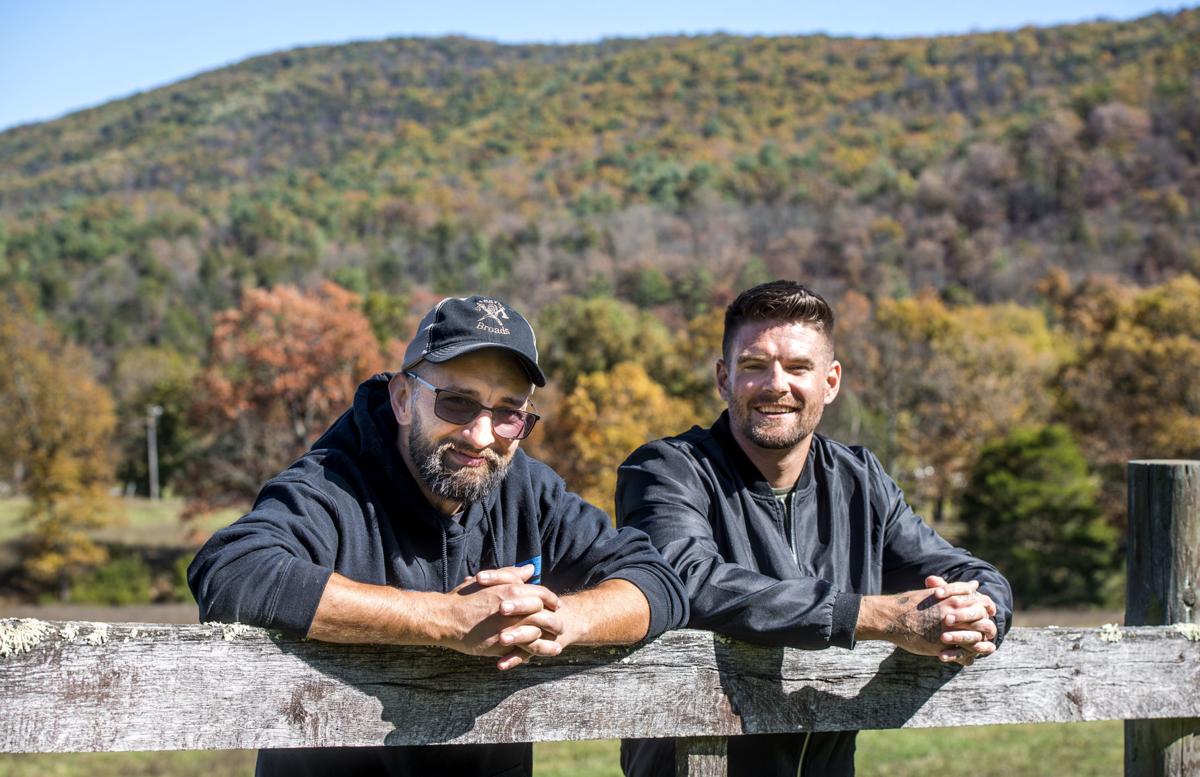 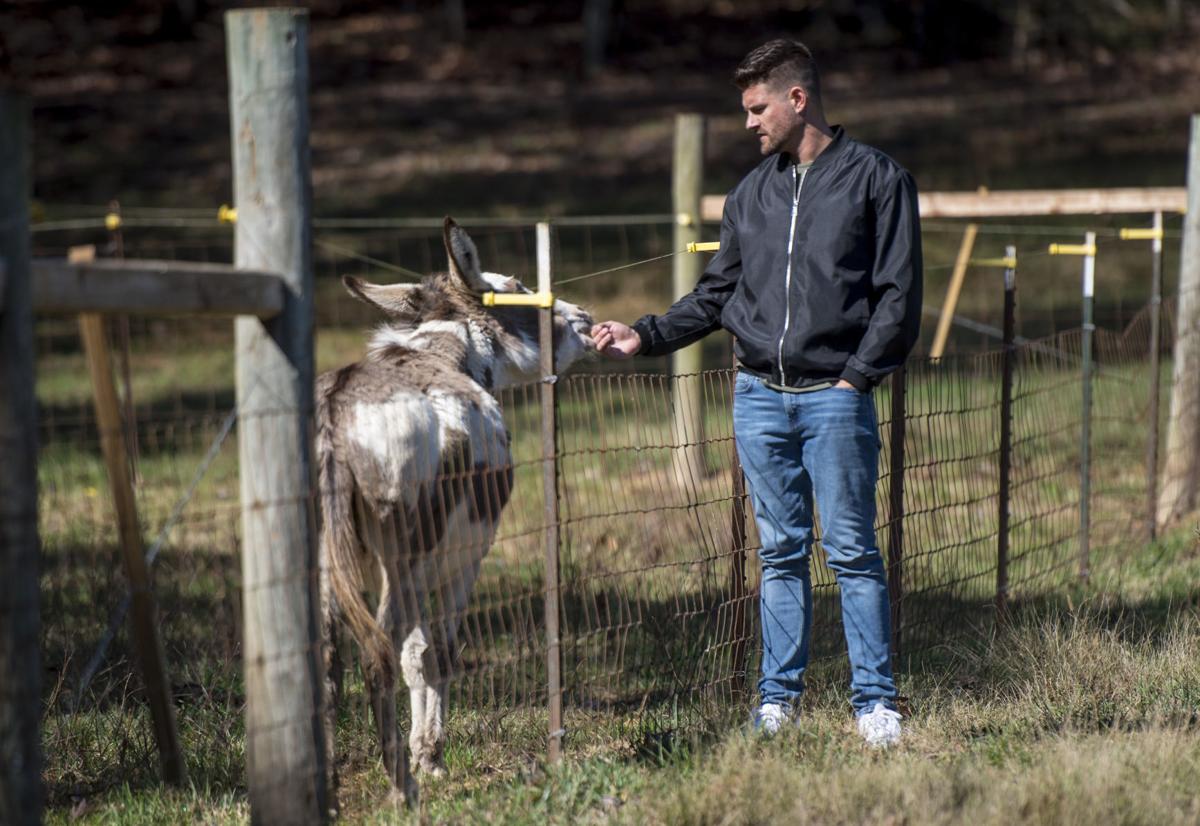 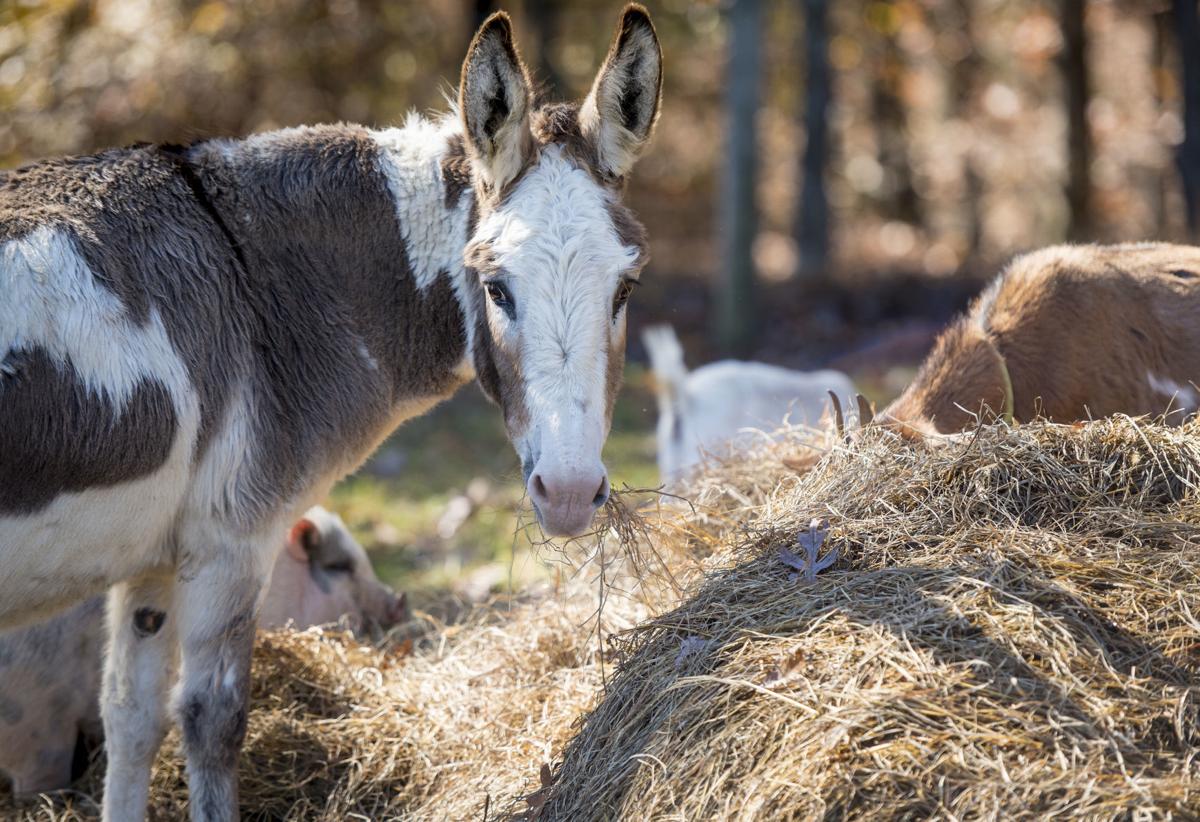 Farm animals, including a donkey, pigs and goats, gather around a pile of hay in an enclosure at Living Waters Farm Initiative Wednesday afternoon.

Farm animals, including a donkey, pigs and goats, gather around a pile of hay in an enclosure at Living Waters Farm Initiative Wednesday afternoon.

COOTES STORE — Pulling up to the home at Living Waters Farm Initiative, a classic red and yellow toy car sat flipped on its head, with rolling waves of color-changing trees along the mountain almost close enough to brush your nose. The scene could belong to any family cozied up in the Valley foothills, but instead the 24-acre lot is a home away from home for healing veterans.

Travis Coyle moved onto the northwest Rockingham County property with his family two years ago as a way to escape the noise and bustle of New Market. Coyle served one tour in Afghanistan as a military liaison, running a security team for the Army Corps of Engineers. He suffered from post-traumatic stress disorder and secondary traumatic brain injury.

With residents like pigs Thelma and Louise, Spunky the donkey and horses Pip, Tahoe and Gloria, Coyle began developing the farm in January with his friend to be a retreat for others struggling to cope with and overcome the invisible wounds many veterans endure during service.

His partner, Mark Lambert, was a combat engineer and was assigned to support Joint Special Operations Command for his first six-month tour in Iraq with the 82nd Airborne Division. Three weeks later, Lambert returned to Baghdad and suffered TBI from combat trauma.

The two veterans both grew up in the Harrisonburg area, but their relationship did not begin to blossom and solidify until they encountered one another at Alcoholics Anonymous meetings and connected over their shared experiences of life during and after the war.

“We kind of formed a bond. We helped each other to kind of navigate how to live as a civilian again. … The whole basis of what we’re calling therapy is built on the idea of peer support,” Coyle said.

Recovering from mental illnesses is always difficult, but Lambert said peer-supported systems have been highly successful in studies. Particularly for veterans, forming a community of people who faced similar circumstances on top of understanding the struggle with mental illnesses post-discharge has garnered support.

“After receiving help through the Department of Veterans Affairs, equine therapy, their faith and realizing that sufferers from PTSD do not have to bear this burden alone, Travis and Mark decided they would like to provide similar support to other servicemembers,” Cline said in the House. “The Living Waters Farm Initiative was started to provide those living with PTSD a supportive community that can stand together and learn from others with firsthand experience.”

Four months later, their vision is on track to becoming a reality by spring. Coyle and Lambert said they were sidetracked for a while focusing on raising funds for the farm, but they eventually decided to be a nonprofit instead.

The plot of land has various animals for riding and interaction, and the two hope to eventually add on a woodworking shop and garden as alternative hobbies for others to channel their energy into.

Other holistic therapy places such as Breaking Free exist for people recovering from trauma, but many provide a slimmer set of structured opportunities for healing.

While the farm is primarily structured as a safe haven for veterans to heal from psychological trauma, the partners said the setting is open to veterans and their families to simply have a space to be around others who understand and share their commonalities.

“Someone comes along here and maybe we help them, maybe we don’t, but they see the value in what we’re doing here,” Lambert said. “So long as we’re drawing veterans closer to each other, we feel like we have a better chance of, honestly, getting through what we’re going through in life and preventing some of these suicides, because it’s just out of control right now.”

Beards and Broads is a disabled veteran-owned axe-throwing company in Harrisonburg that is civil-service oriented. Kyle McQuillian, co-founder of Beards and Broads, said there’s a need for the work of Living Waters because of the stigma surrounding mental health and the lack of veteran-run support groups.

“This isn’t one of these hundreds of charities out there which charge you an arm and a leg and make millions of dollars. You got two people who’ve genuinely been in that position,” McQuillian said. “They are a group of guys out there that genuinely know what they’re dealing with, what they went through and can actually help them and give them something constructive and educational to take their mind off of those instances that might be holding them back or holding them down.”

Andrea Coyle, Travis’ wife, works with mothers and significant others of veterans to help them through the process of maintaining a positive mentality while finding support and healing.

Before coming to Living Waters, visitors bring their family to dinner with the Coyle family. Andrea Coyle said breaking bread side by side at their table is important because it is easy to become isolated.

“We invite all their family over, their kids and everything, and then they realize, ‘Oh, wow. We’re not the only family,’” Andrea Coyle said. “We try to have a meal with them. There’s just something that happens when people eat together.”

With only the slight breeze between trees and neighing of horses as the farm’s soundtrack, Living Waters is a place designated for healing but also a place to find a community.

“We’ve talked about the hard times and the tragedies a lot, but we want to celebrate with you too,” Travis Coyle said. “We just want to do life together.”

Beards and Broads has partnered with the farm to organize its first fundraiser on Nov. 9. The axe-throwing tournament is between two-person teams from 10 a.m. to 7 p.m. Winners will be decided based on single elimination, best of three, in a tournament-style competition. Participation is $20 per competitor and partners are randomly selected. Tickets are available online or at the Soldier Tribute Game on Oct. 25 at Broadway High School.

Living Waters Farm Initiative is still in the paperwork process of becoming nonprofit, but it will hold its official grand opening next spring. Currently, it is open by invitation only.

“We’re simply here to remind them that they already possess the resilience and the personal resolve to get through whatever life has thrown at them,” Lambert said. “A lot of them experience much more tougher things overseas and in deployment type combat zones, so we’re simply just here to remind them, ‘Hey, man. Look where you’ve been. Look, you’re still here.’”