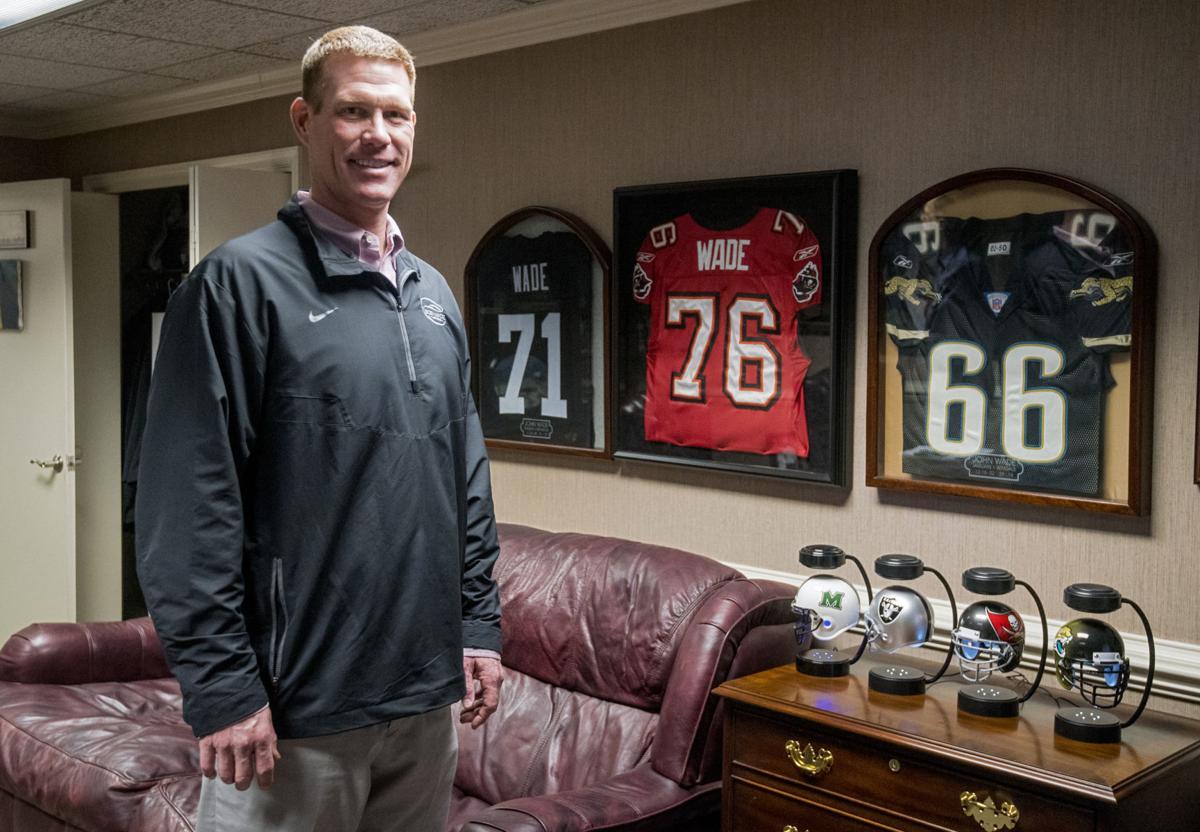 Bob Wade Autoworld owner/operator John Wade poses for a photo in his office with his NFL jerseys. 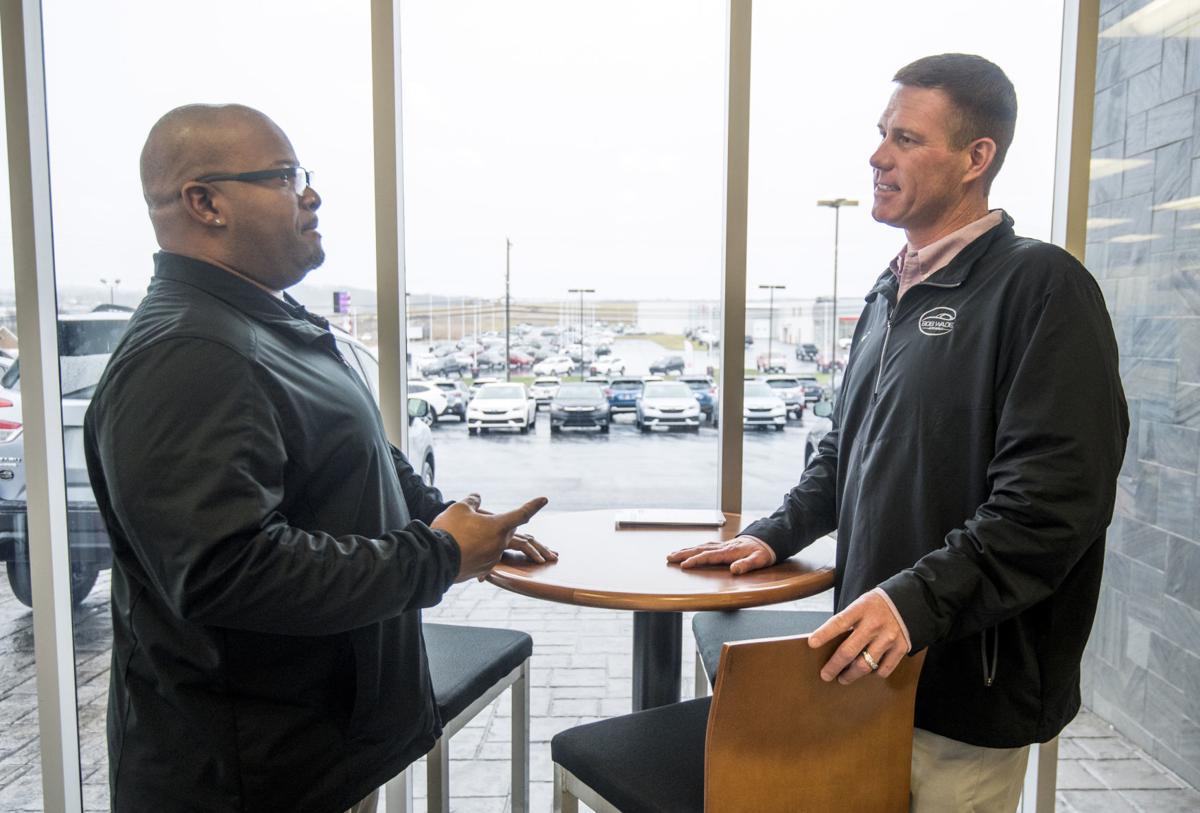 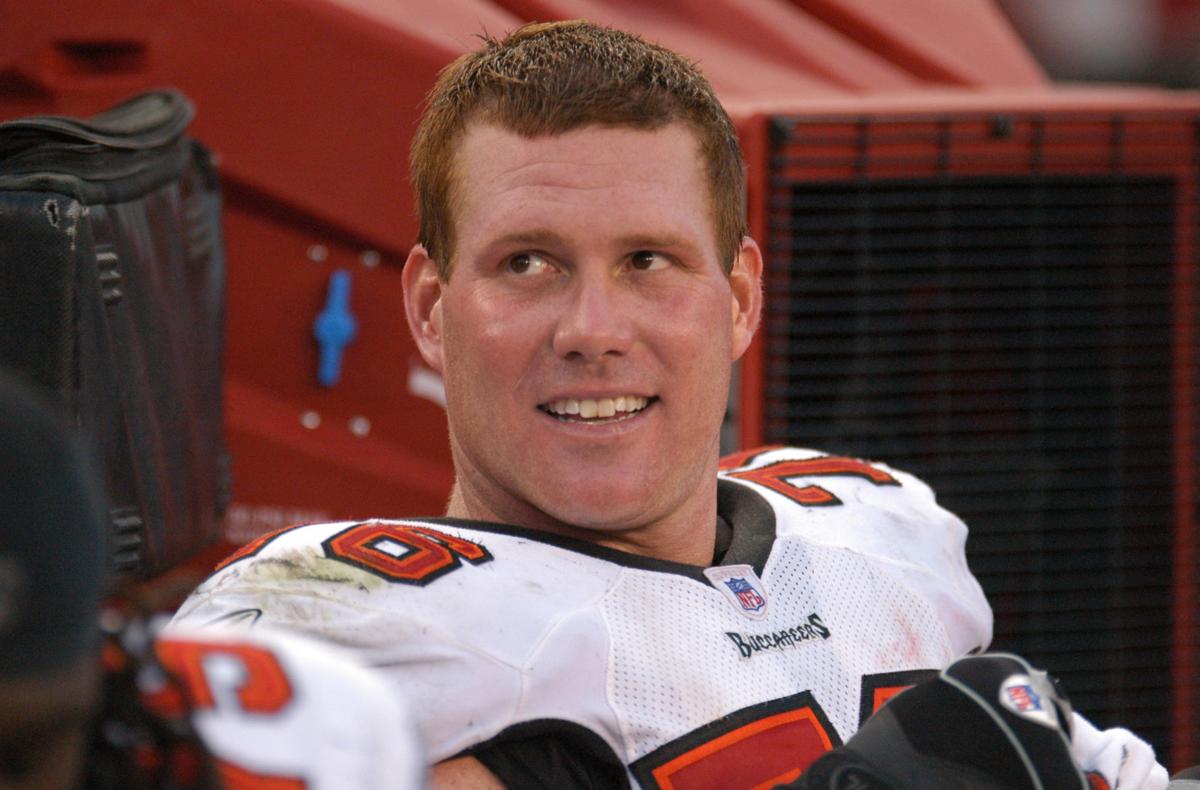 Tampa Bay center John Wade sits on the bench during a game against the Jacksonville Jaguars on Oct. 28, 2007. 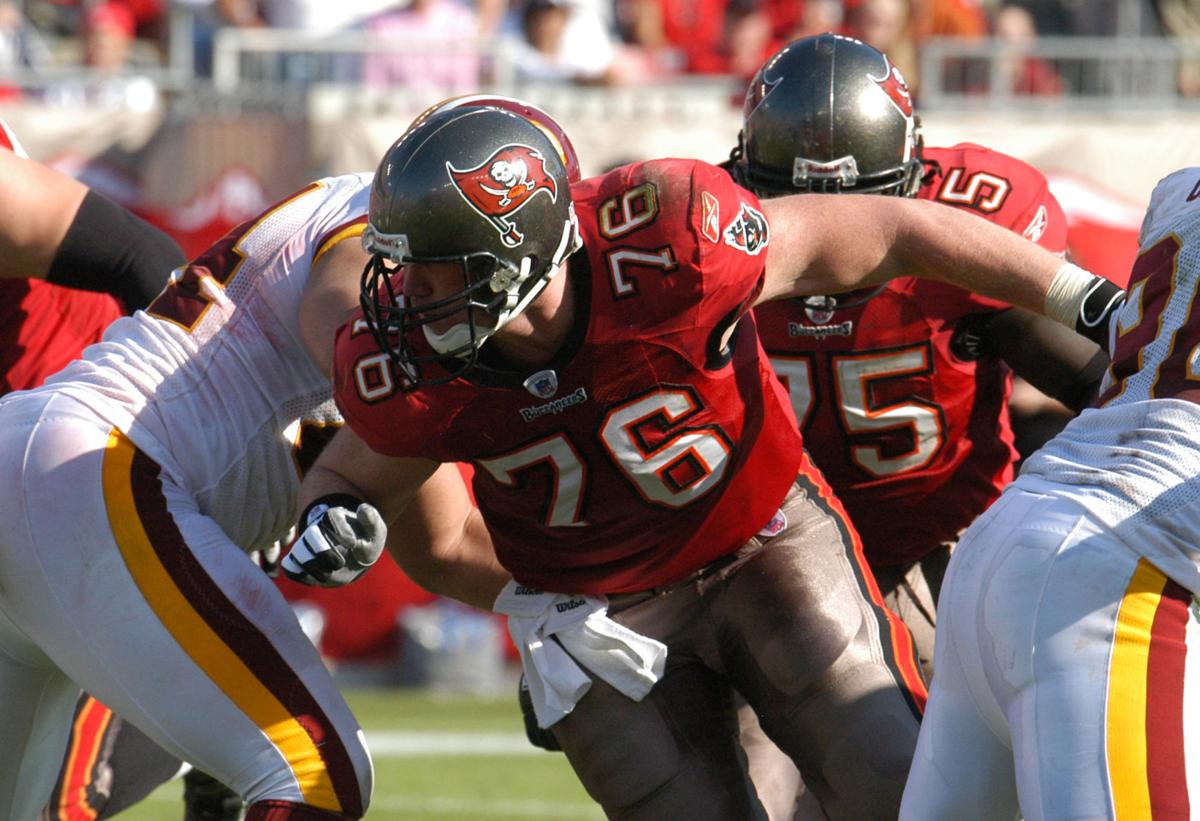 Tampa Bay center John Wade breaks through the line against the Washington Redskins on Nov. 19, 2006.

Bob Wade Autoworld owner/operator John Wade poses for a photo in his office with his NFL jerseys.

Tampa Bay center John Wade sits on the bench during a game against the Jacksonville Jaguars on Oct. 28, 2007.

Tampa Bay center John Wade breaks through the line against the Washington Redskins on Nov. 19, 2006.

John Wade headed to Marshall University to study business management and play football, with plans to return to the family car business in his native Harrisonburg.

“That was easy for me — my only [Division I] offer,” he said of going to Marshall.

Wade did indeed return except for a pleasant yet physically demanding detour — 11 years in the brutal world of the National Football League.

The Harrisonburg High graduate was an offensive center from 1998-2008, playing in 131 games for Jacksonville, Tampa Bay and Oakland.

Wade returned to Harrisonburg nearly 10 years ago — and less than a year later his father, Bob, died unexpectedly at the age of 66 in 2011.

Now the younger Wade carries on the family legacy as owner/operator at Bob Wade’s Autoworld on South Main Street. His father began the business four decades ago this year.

“I always planned to come back,” said John Wade, 45, sitting in his office that is filled with helmets and jerseys from his NFL career. “I was always going to come back.”

Wade is one of just three HHS graduates to appear in the NFL, in between Howard Stevens (1973-77) and Akeem Jordan (2007-14), a former JMU linebacker who played for Philadelphia, Kansas City and Washington.

He enrolled at Thomas Harrison Middle School and then played football at Harrisonburg High for former coach Tim Sarver and varsity baseball for Jack Hale.

“John was a center here and then we moved him to tackle,” said the retired Hale, an offensive assistant under Sarver. “He was really athletic. We went to Handley [in Winchester] and their nose guard gave us fits so we moved John back to center.”

Wade got very few college offers while at HHS. His father knew the late Sonny Randle, a former University of Virginia and NFL player who was the head coach at Marshall from 1973-83. The Marshall assistant who followed Wade in high school was Mickey Matthews, who became the JMU head coach in 1993.

“I will never forget a scout [Randle] came to practice who was affiliated with Marshall,” Hale said. “We sort of did an audition and put a really quick nose guard on him and John was able to cut him off. I think the coach was fairly impressed.”

Wade was part of a national title team at the Division I-AA level at Marshall in 1996. He worked his way into a starting role as a junior and again as a senior.

Scouts from every NFL team came to Marshall prior to the 1998 draft, mostly due to see star wide receiver Randy Moss of the Thundering Herd.

“Most definitely they came to see Randy,” Wade said. “I probably got more looks than I should have.”

Moss was taken in the first round as the 21st pick overall by the Minnesota Vikings while Wade went in the fifth round, to Jacksonville. Wade played in five regular-season games as a reserve in 1998 as a rookie and started in a playoff win over the New England Patriots that season.

Two years later the Patriots hired Bill Belichick as head coach, and he has led them to six Super Bowl titles.

“He’s made a big difference for us,” former Bucs coach Jon Gruden told a team publication in 2005 about Wade. “He makes a lot of key decisions in there and he’s been a very physical presence for us in the running game and in the passing game. It’s good to have him in there. He’s a leader. I think he really believes in what we’re doing and he’s a guy we’re counting on.”

Wade ended his NFL career in 2008, playing in five games for Oakland.

He had his share of injuries but was never diagnosed with a concussion — the topic of a notable film that Wade watched few years ago.

“I thought it was a good movie. I feel bad for anyone who is suffering — be it joints, head, whatever,” he said.

But Wade also notes pro football players know the risks. “You sign up for it,” said Wade, a member of the HHS and Marshall athletic halls of fame.

At 6-foot-5, Wade is now a towering presence at the showroom and he oversees a staff of about 50 employees. His duties are wide-ranging, and he estimates he puts in about 50 or 60 hours a week in an industry where customers can now look at photos of cars on their phones.

“I never saw a title,” Wade said on the phone, talking to an employee one recent rainy morning. “Good; we need it.”

But these days are also spent watching his two children play youth sports in the Spotswood High district. He and his wife, Natalie, who is from Kentucky, have a boy in sixth grade and a girl in eighth grade.

His mother Kathy, a tireless supporter of her late husband’s company, is still a regular at the office. His late father was a big fan of James Madison University athletics, though the Dukes didn’t heavily recruit his son.

“They didn’t offer a scholarship,” he said.

While in high school the NFL seemed far away, Wade gained confidence in the Senior Bowl in 1998 among NFL prospects. “Maybe I can play with these guys,” he told himself. And he did.

Now, he is back in his hometown, putting that business management degree to good use. “The NFL was a bonus,” he said, with a smile.