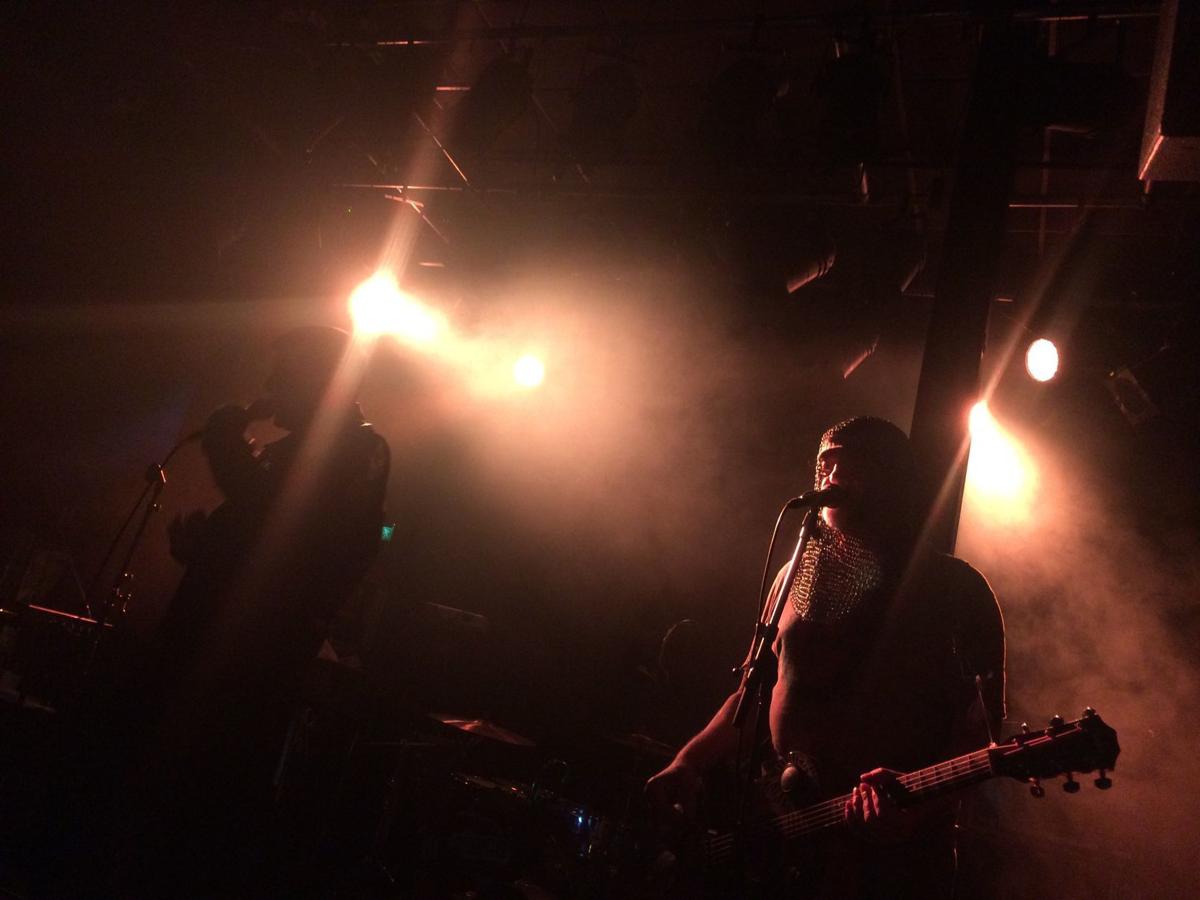 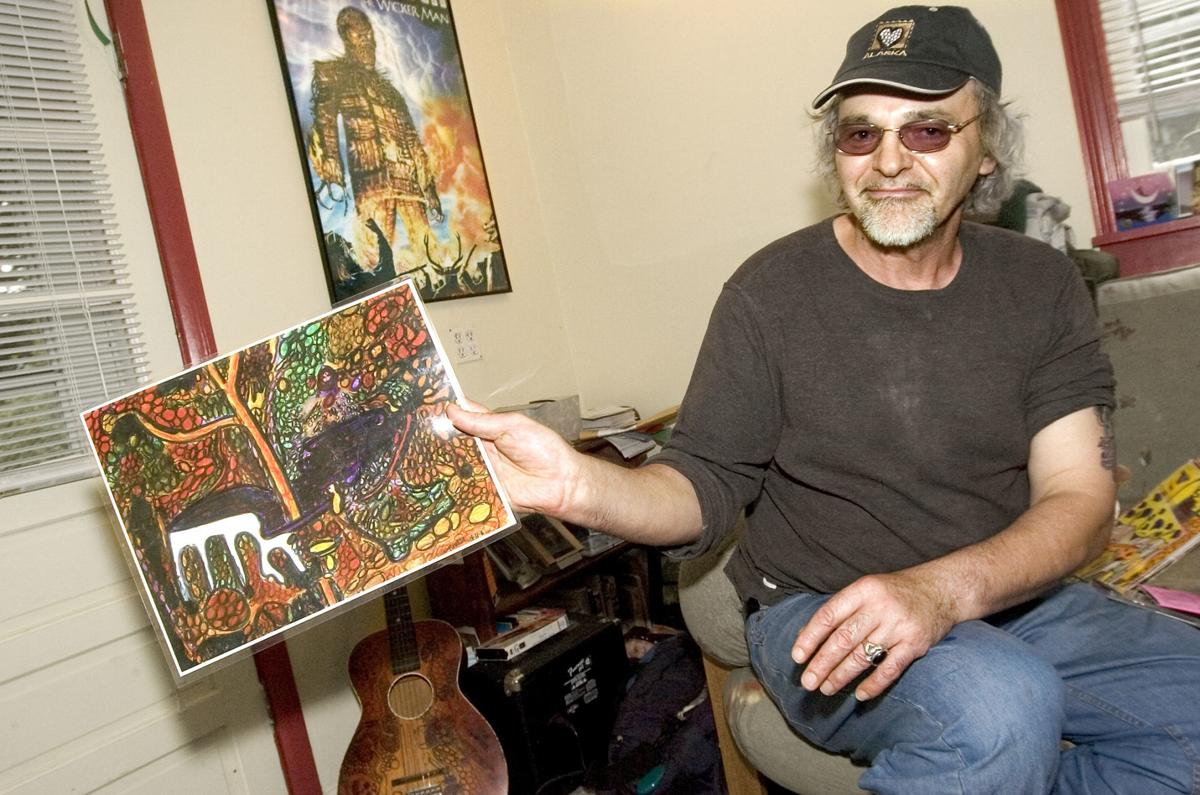 Harrisonburg painter, poet and musician Terry Turtle holds a drawing he made titled “Space Outside of Me” in 2006.

“Terry was such a rare guy. ... Terry was his own thing and stayed true to whatever it was that drove him,” said former Black Flag frontman Henry Rollins of Harrisonburg’s Terry Turtle, above, shown in 2006.

Harrisonburg painter, poet and musician Terry Turtle holds a drawing he made titled “Space Outside of Me” in 2006.

A man without filter, limits or hesitation — Terry Turtle was a punk icon who made art for art’s sake without permission. His colored marker streaks and cult noise have left a vibrant scar on the underground art community.

Turtle was diagnosed on Aug. 30 and died at age 67 on Nov. 20 from adenocarcinoma, cancer of the bladder that spread throughout his entire body.

Bandmates and the closest of friends, Turtle sometimes called Billy Brett his sun — specifically s-u-n — and the two were inseparable. Despite the generation gap between them, the two connected while working together at Harrisonburg’s Little Grill Collective over their shared affinity for rock music. Brett lacked experience as a musician, but Turtle was adamant Brett join his dream of creating art for the sake of art and sharing his “world” with anyone else on the planet who was interested in hearing it.

“My thought was like, we are alive now. We should take advantage of our time together,” Brett said. “I wanted to just do whatever he wanted to do in terms of pushing his art out. He didn’t have a business or any kind of professional goals or anything like that. He wasn’t really interested in anything other than his own universe.”

Together, Brett and Turtle practiced and performed together non-stop for 14 years as Buck Gooter. The project became more than a band or a sound or even a world inside Turtle’s mind, it manifested into their lives.

“Terry kind of gave me everything, you know, like Terry gave me my world. My world became what we did and who I was and I went everywhere with him and we did everything together,” Brett said.

Henry Rollins, former frontman for Black Flag and radio host on KCRW, amplified the reach of Buck Gooter in 2013 when he broadcast the song “Dead Rats.” Rollins said each of Buck Gooter’s albums offered something new to music, and Turtle’s ability to stay kind, original and true-to-self was unique.

“Terry was such a rare guy. He and Billy made [such] an interesting pair. Terry was his own thing and stayed true to whatever it was that drove him,” Rollins said in an email. “Buck Gooter wasn’t trying to be like any band I know of. They were 100% their own.”

For the thousands of fans around the world, Turtle’s reality was spent as an outcast for most of his life outside of the spotlight. From ages 13 to 64, Turtle was battling alcoholism and lost in a jungle of drugs, but in his last few years Turtle sobered up and loved the work he did and life he led.

Alethea Leventhal, a member of Turtle’s chosen family, met him in March through music and said he was just as his art was, wild and wonderful, which served to inspire many.

Graham Brouder, another close friend of Turtle’s who spent 2015-2018 driving Brett and Turtle around on tour, met the ”Redneck Hippy” years ago at a show shortly after moving to the Valley in 2011. Brouder said Turtle was a warm welcome to newcomers in the area, always able to make friends and extend a sense of belonging to others.

“He’d find something in common with everyone. Despite being about as punk as you can get, he would still find some little thing to have in common,” Brouder said. “People met him at their first show or young people new on the scene and nervous and anxious about not fitting in; talking to Terry and then feeling accepted. That’s something I’ve heard from lots of people.”

While various corners of the globe remember Turtle for his music, he also created hundreds of pieces of abstract visual art, which he always laminated. In the documentary, “The Man Named Turtle,” Turtle said he laminated his artwork so anyone could “throw it on the [expletive] floor or take it in the shower and wash it off.”

Turtle’s risograph print, “Blood Cells Filled With Yoga” are available for purchase online at www.posmicom.com as well as his art book, “The Nun and Other Pieces.” Profits from the print will benefit The Terry Turtle Memorial Fund, which aims to garner monetary donations for the causes Turtle cared about — namely children, the environment and animals.

As of Dec. 16, 141 donors have raised $5,568. Brett is organizing the fundraiser and has selected 20 charities that aligned with Turtle’s values, which will benefit from the donations.

“He barely had any money to throw at things, and he would give the shirt off his back, he would give money to people in the neighborhood all the time,” Brett said. “He tried to really help people as best he could.”

Many who met Turtle said the one trait that defined him outside of his free-flowing creativity was his humor, which Leventhal said he upheld to his death.

“I think back about it, and as harrowing as the time was before he passed away, I think there’s like dozens or maybe hundreds of moments I look back on that make me laugh, even when he was really sick,” Leventhal said. “Even in his darkest hour, he was so shining, so bright.”

Turtle charged Brett with keeping the band alive, and due to recordings featuring samplings of Turtle, the legacy of the “Mensa Dishwasher” will live on.

Brett said that despite his mortal, physical death, Turtle’s creativity offers a channel into the living realm so in a sense, he has not died.

“All of his work is so alive that he remains alive that way,” Brett said. “His art is so vibrant, and it’s so alien. It’s so its own thing; it’s not referential to a time or place, so it’s always fresh.”