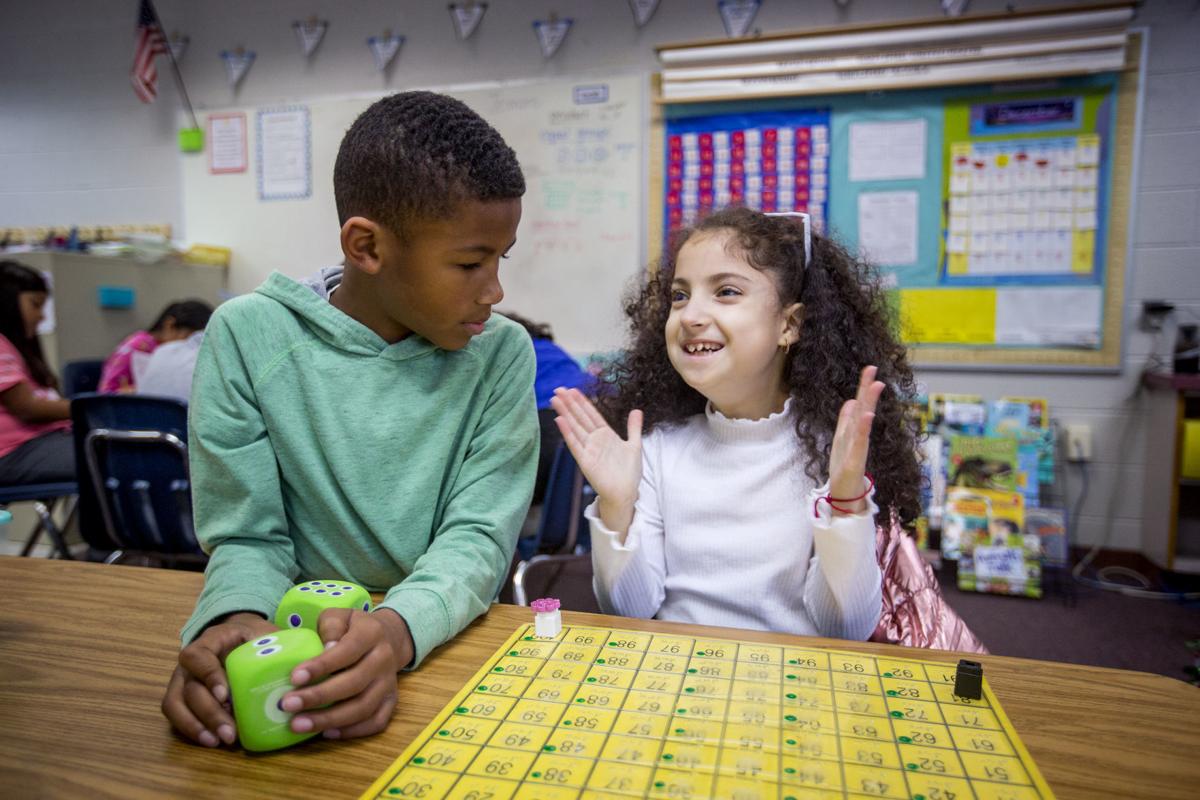 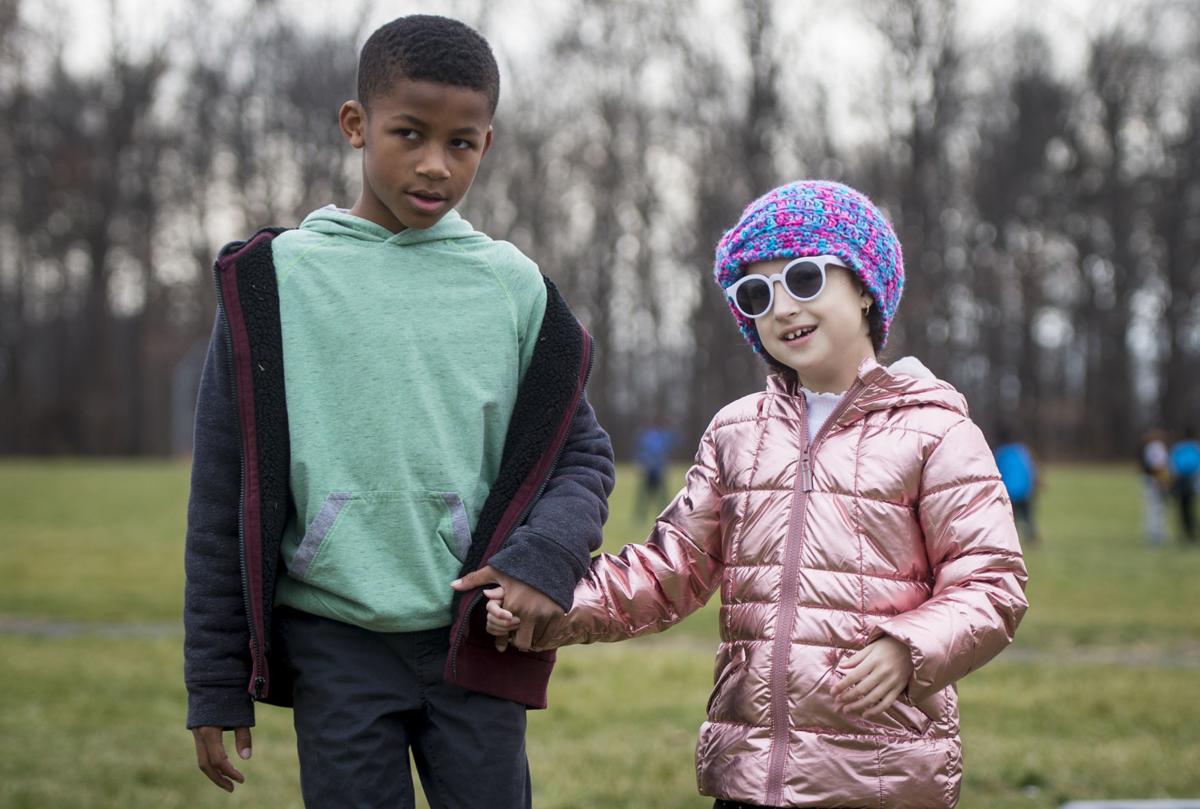 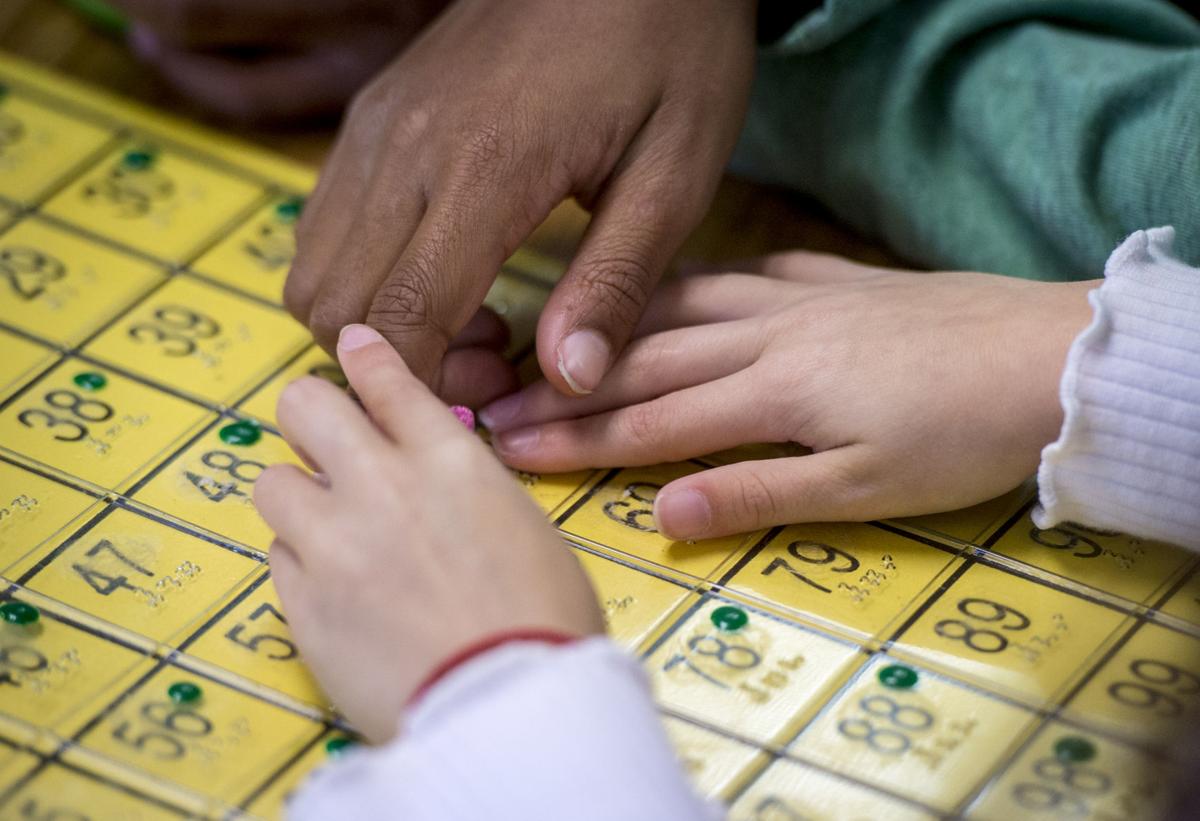 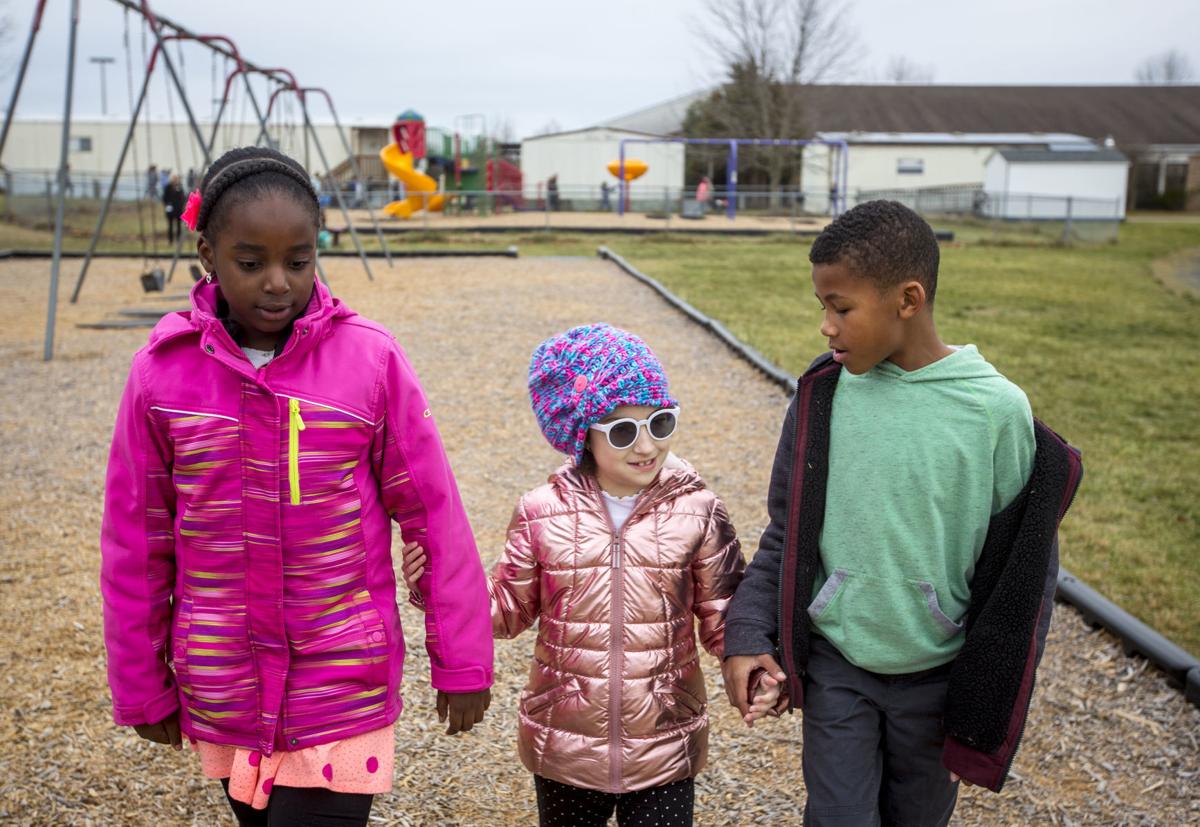 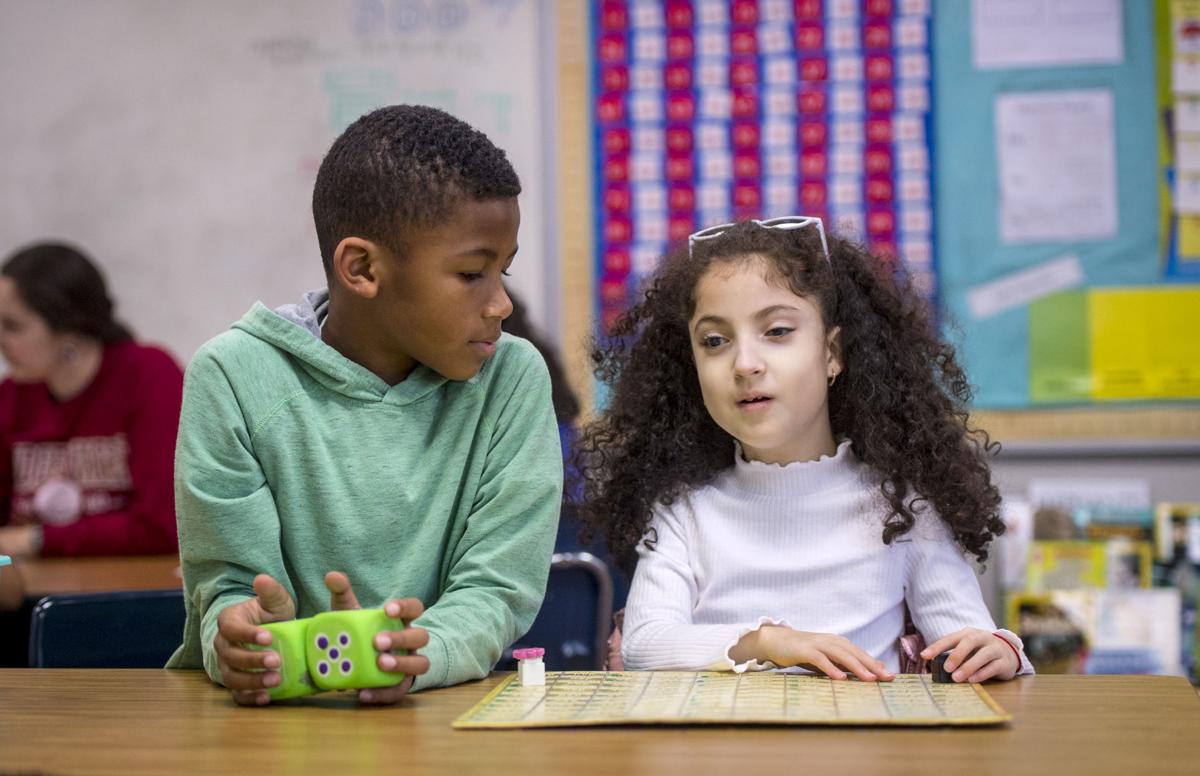 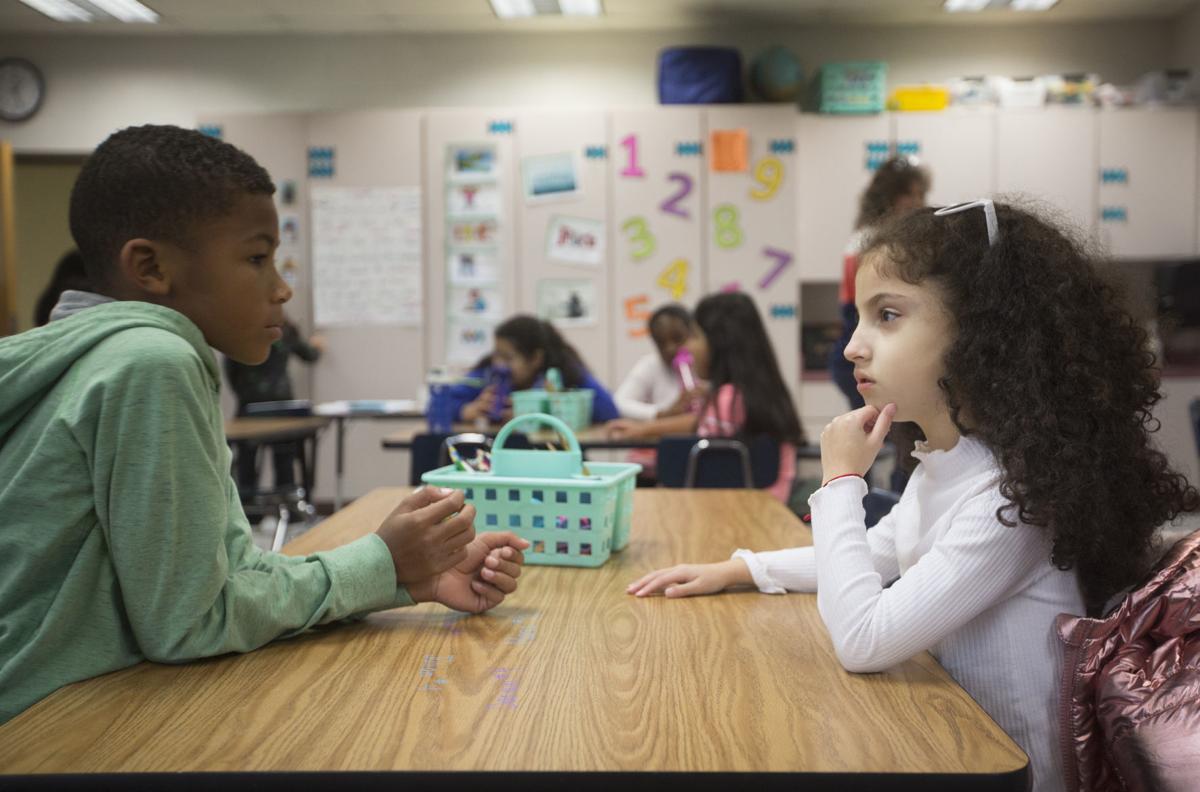 It was a big moment. City Council Chambers were packed with teachers, community members and parents.

As she waited to speak, Maria Isabel Pizarro Torres remembers starting to get really nervous. She’d never spoken in front of a group before.

But she had her best friend, Julian Brooks-Ball, by her side. The two third graders were at the Harrisonburg City School Board meeting on Dec. 3 to talk about their friendship.

On the surface, it might seem like an odd topic to be addressing the School Board about. But for Julian and Maria, who is legally blind, it was important to share their message that together is better. It was the theme of an Inclusion Day they’d helped with at their school, Stone Spring Elementary, earlier this year.

“It is very easy for you to see me, but I can’t see you,” Maria said, while reading the notes in front of her, written in braille.

Maria was born prematurely, at just 24 weeks. “My eyes were not ready at all,” she said.

She developed retinopathy, which is damage to the retinas and causes vision loss or impairment. She also has congenital glaucoma and underwent surgery to preserve her eyes. But she’s never been able to see more than some light and dark.

Maria said the condition also causes her eyes to move in different directions, which gives her powers. “That’s a joke,” Maria said, laughing and pausing her speech to allow the audience to laugh with her.

“Although I am legally blind, that doesn’t stop me from being a happy and independent girl,” Maria said. She gets that independence partially thanks to her cane, which she named “Wagon,” because it helps her get places.

But sometimes Maria does need help, and that’s where friends like Julian come in. She explained to the School Board what “sighted guiding” is and how she taught Julian so that he could help her. Together, they taught their classmates about it, too.

“I’m Julian and I’m Maria’s friend and classmate,” he said at the meeting. “Before I met her, I thought she was different ... but she’s just like the rest of us.”

Julian went on to say that over the three years of their friendship, they’ve gotten to know each other well and spend a lot of time together.

“From Maria, I’ve learned that I can help people,” Julian said.

Maria and Julian received a standing ovation at the meeting, and there were even a few tears shed.

While it was a cool, although nerve-wracking experience speaking to the board, Maria and Julian were just glad to be there together, they said.

A spunky, independent first grader at the time, Maria didn’t want to accept Julian’s help when he first offered it to her, said her mom, Maria Torres.

In fact, Maria pushed Julian away while on a field trip to A Dream Come True Playground when they were still in first grade at Stone Spring.

“I demanded she give him the opportunity to help her go up the stairs to go down the slide,” Torres said. “She protested but did. And once she was down and he came after her, she was asking for him to go up again.”

After that, Maria and Julian became best friends. Despite not being in the same class during second grade, the two would find each other during recess. This year, they’re in the same class again and showing their school and community that differences aren’t barriers, and that people are better together.

“He is always helping her get around the classroom and looking after her,” Torres said. “I simply love him. She always tells me how he helped her in school, and when his birthday was approaching, she told me.”

Torres made Julian a crotchet hat for his birthday this year in his favorite color for Maria to give to him. She immediately asked him to wear it, which he gladly did.

“Julian has always loved helping people,” Brooks said. “I remember that he would speak about a blind girl in his class and the things that she would do differently,” Brooks said. “I think he was intrigued in the beginning and just wanted to get to know Maria better.”

Although Maria has been in Julian’s life for some time now, the School Board meeting was the first time Brooks had heard Maria’s full story.

She said the meeting was a “proud parent moment,” but it was always just about their friendship.

Torres also couldn’t stop expressing her pride in her daughter following the meeting.

“I didn’t know there would be so many people there,” Torres said. “It was very hard to hold my emotions while filming her.”

Torres said Maria will always be her own advocate, but she’s preparing her for a world that might not always accept her.

“I always tell her about her scars and her battles with life since she was born just to make sure she is emotionally strong to speak back to a possible bully when the teen years come,” she said.

The impetus for Maria and Julian’s speech to the School Board came earlier this year. Stone Spring hosted an Inclusion Day thanks to a grant, secured by Jill Martorana, an autism specialist with the school division.

The Inclusion Day event took place as a result of the Inclusion Project Grant from the Virginia Department of Education. The grant was created in response to a group of youths with disabilities who saw the need to promote disability awareness and inclusion in schools.

Martorana coordinated with a committee chairperson at Waterman Elementary for its event and led the committee at Stone Spring.

They chose October for the event because October is Disability History and Awareness Month. The event consisted of a number of presentations from community members about their experiences, including a presentation by Maria to kindergarten, first and second grade students.

It was suggested to Martorana that she contact the School Board to see if it’d be interested in hearing about the Inclusion Day.

“They were very accommodating and ready to fit us in,” Martorana said. “It really was very special.”

So happy to be the mother of this beautiful girl! So honored to have met this little "gentleman on the making". I totally adore him! Thanks Megan and Daniel for the article and pictures..