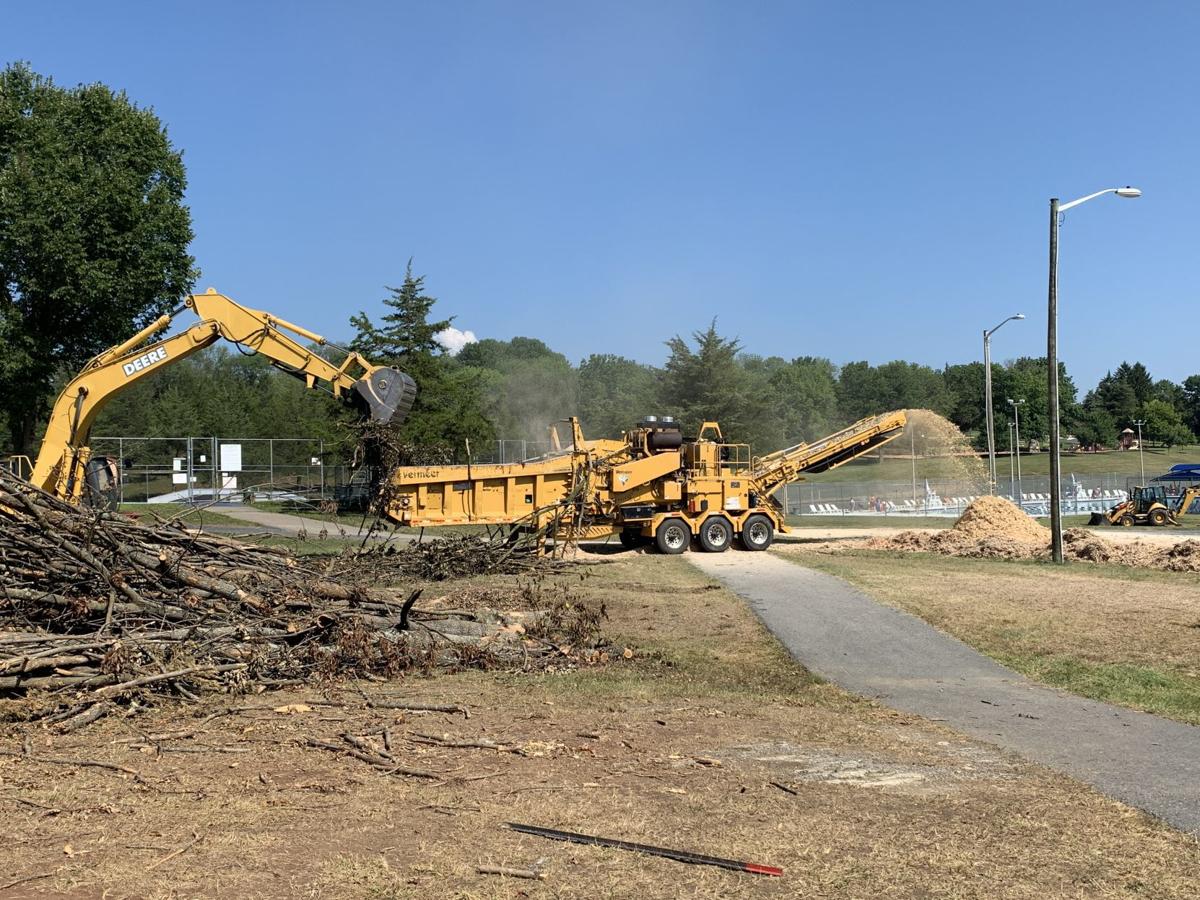 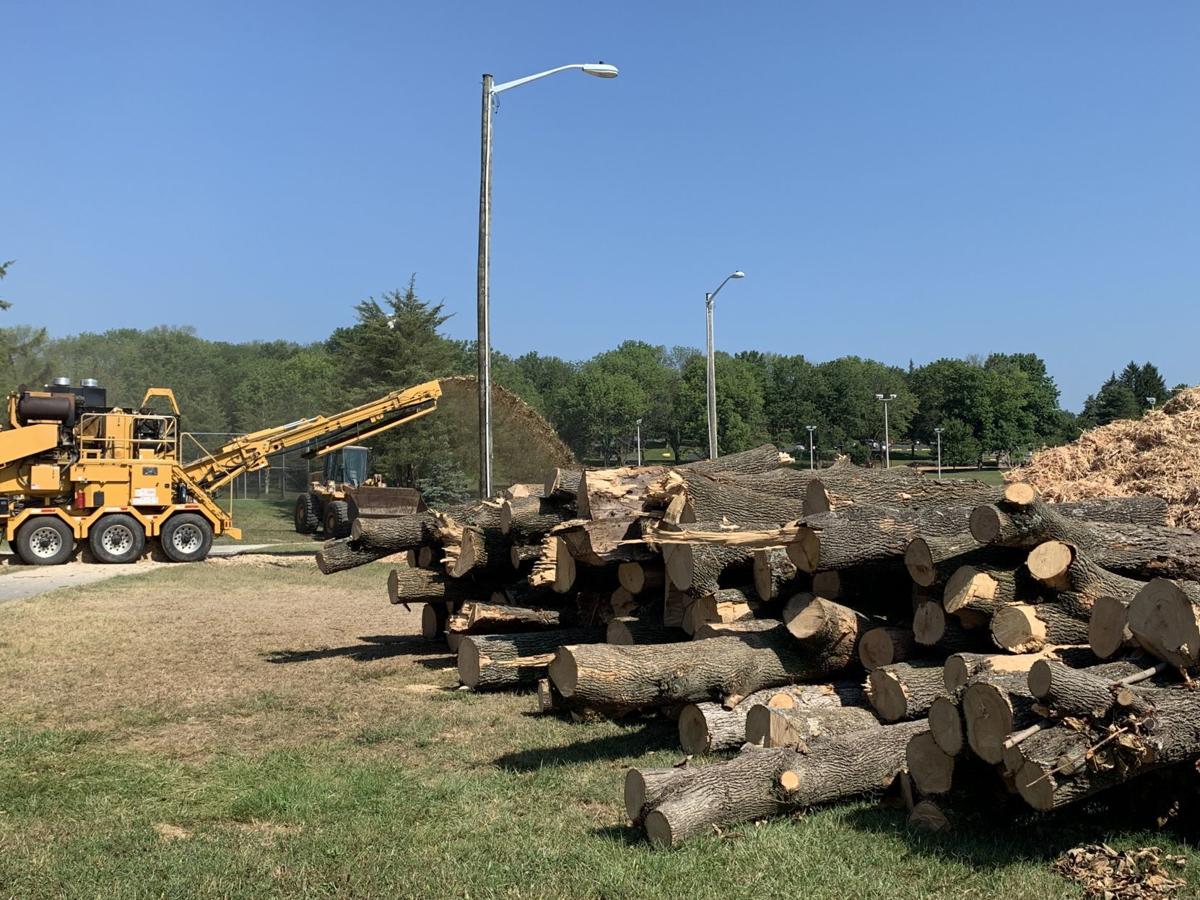 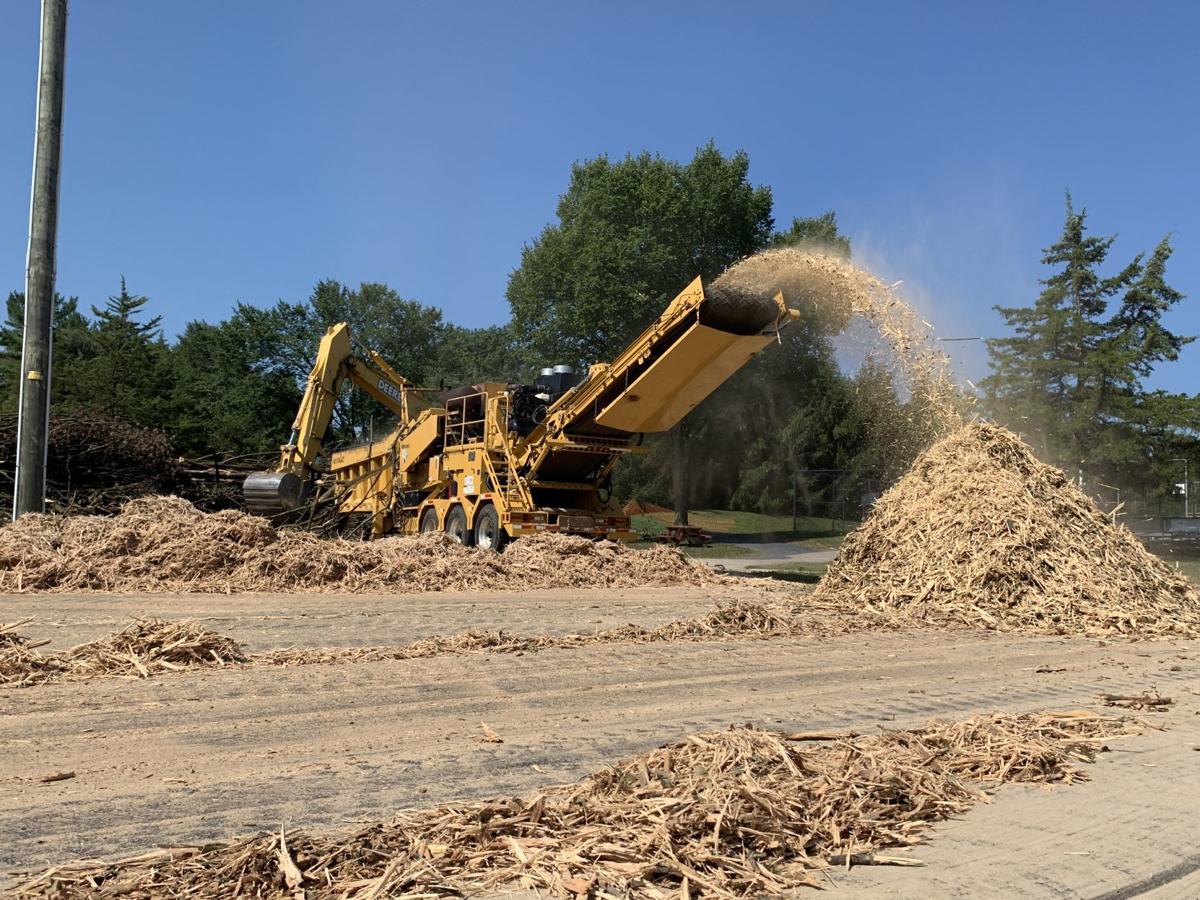 HARRISONBURG — After the emerald ash borer infestation in Harrisonburg caused city staff to take down 200 trees, the city’s Parks and Recreation staff teamed up bright and early Thursday with its contractor, Mission Mulch, to turn the torn down trees into woodchips for the bioreactor project at Purcell Park.

The emerald ash borer is a jewel beetle native to northeastern Asia that feeds on ash species. It was originally released in Michigan and was introduced to Virginia in the early 2000s. From Northern Virginia, it made its way to the southern part of the Commonwealth. Harrisonburg Parks and Recreation confirmed the species had hit the city in May 2017.

Staff partnered with the nonprofit, Ridge to Reefs, which received a $13,500 grant from the the National Fish and Wildlife Foundation to pay for the entire project. The undertaking includes processing the trees used for the bioreactor, according to Drew Koslow, the restoration ecologist for Ridge to Reefs.

Ridge to Reefs is a nonprofit organization supporting local creation and implementation of watershed plans primarily in the Chesapeake Bay and in Coral Reef watersheds, according to its website.

Superintendent of Parks Jeremy Harold said in an interview Thursday that the city needs 380 cubic yards of woodchips for the bioreactor project at Purcell Park. The project will help to reduce the nitrogen levels in Blacks Run.

The woodchip bioreactors are designated to mimic wetlands and convert nitrate-nitrogen in the water to harmless nitrogen grass, which makes up 78% of the air people breathe, according to a press release from the city. Nitrogen is a source of pollution in surface waters of Virginia and the Chesapeake Bay Watershed.

“The woodchip bioreactors we’ve built typically remove 90% or more of the nitrate that enters the practice,” Koslow said in the press release. “We have estimated the cost per pound of nitrogen removed to be $7 to $10, which makes bioreactors tremendously cost effective.”

The woodchip bioreactor is expected to be completed at some point this month, according to Harold. It will be installed above the pond, which collects water from Siebert Creek from a pipe and discharges water into Blacks Run below the pond, according to the press release.

The bioreactor will divert water in the pipe to the bioreactor, de-nitrify the water and allow it to continue to flow in the pond, which will reduce the algae blooms that have plagued the pond in the past, the release said.

In August 2017, staff created the Urban Wood Program with the help of the Virginia Department of Forestry and Virginia Urban Wood Group.

The city received The Virginia Department of Forestry grant in April 2018.

There are still 470 infected trees in Westover Park that will be taken down throughout the fall and winter.

“It’s a slow process and we will take the trees down on a case-by-case basis,” Harold said, adding that no tree will go into the landfill.

Harold said all other parks have up to 20% ash that staff will start removing as the tree becomes a hazard.

There is a planning campaign that will begin in late September to replant all the trees taken down on a 1-1 ratio, according to Harold.

“We won’t plant more than 10 percent of the same tree so when the next bug comes, it doesn’t wipe us out,” he said.

The city is also making the logs from the trees available to the public for purchase through the city’s Public Surplus website.

Harold said the logs will begin being posted on Monday and there will be two auctions of 30 logs each.

“The main goal is to reuse the wood,” Harold said. “Crafters can use the wood and keep it alive in the community and promote it in the city to boost the local economy.”

"The woodchip bioreactors are designated to mimic wetlands and convert nitrate-nitrogen in the water to harmless nitrogen grass, which makes up 78% of the air people breathe, according to a press release from the city." I'm thinking you mean harmless nitrogen gas.

Perhaps. But nitrogen grass would be way cooler.