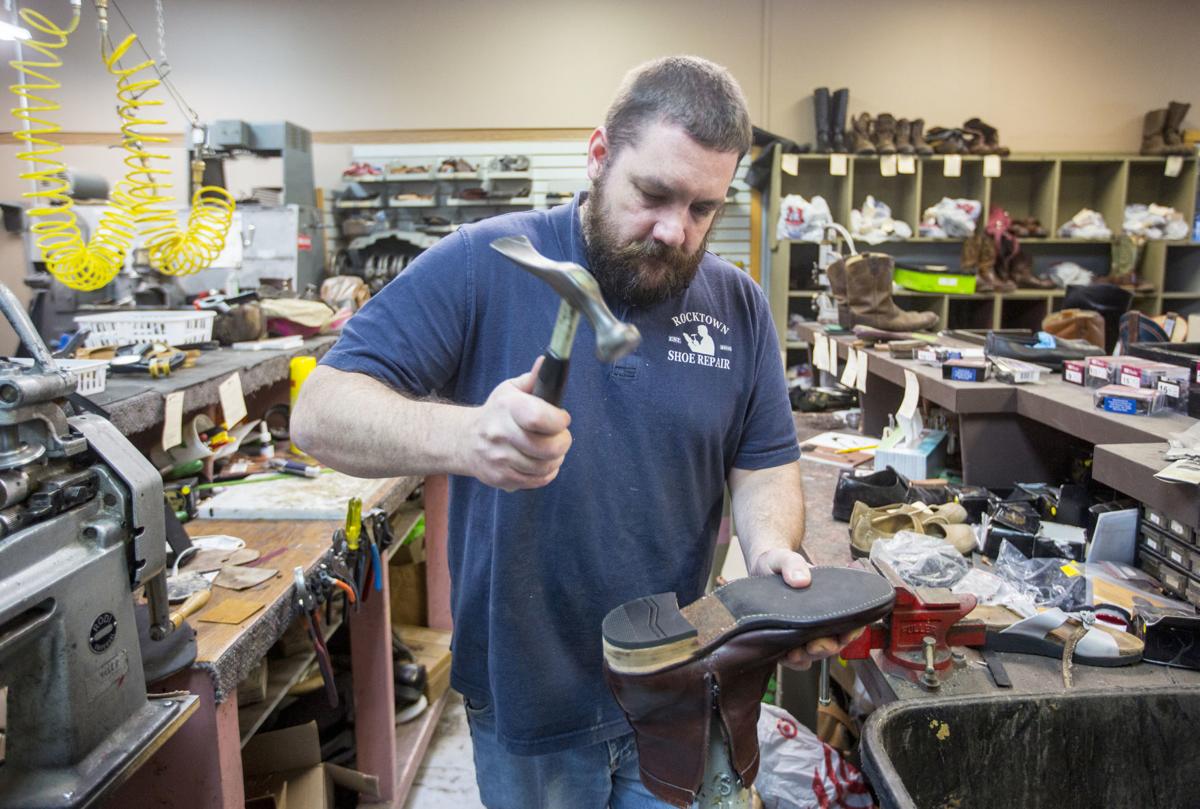 Rocktown Shoe Repair owner Corey Riddle hammers the heel of a customer’s boot in his Harrisonburg shop on Friday. 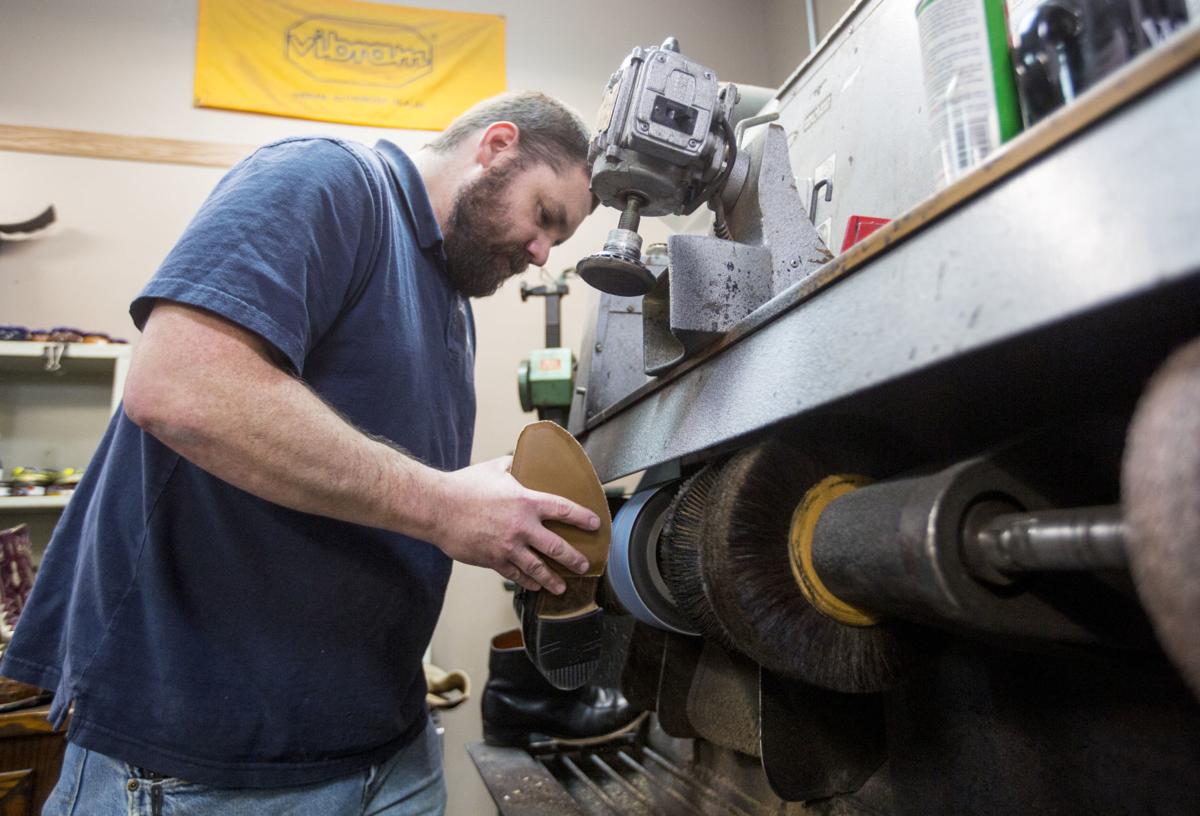 Rocktown Shoe Repair owner Corey Riddle sands down the edge of a shoe that received a new sole. 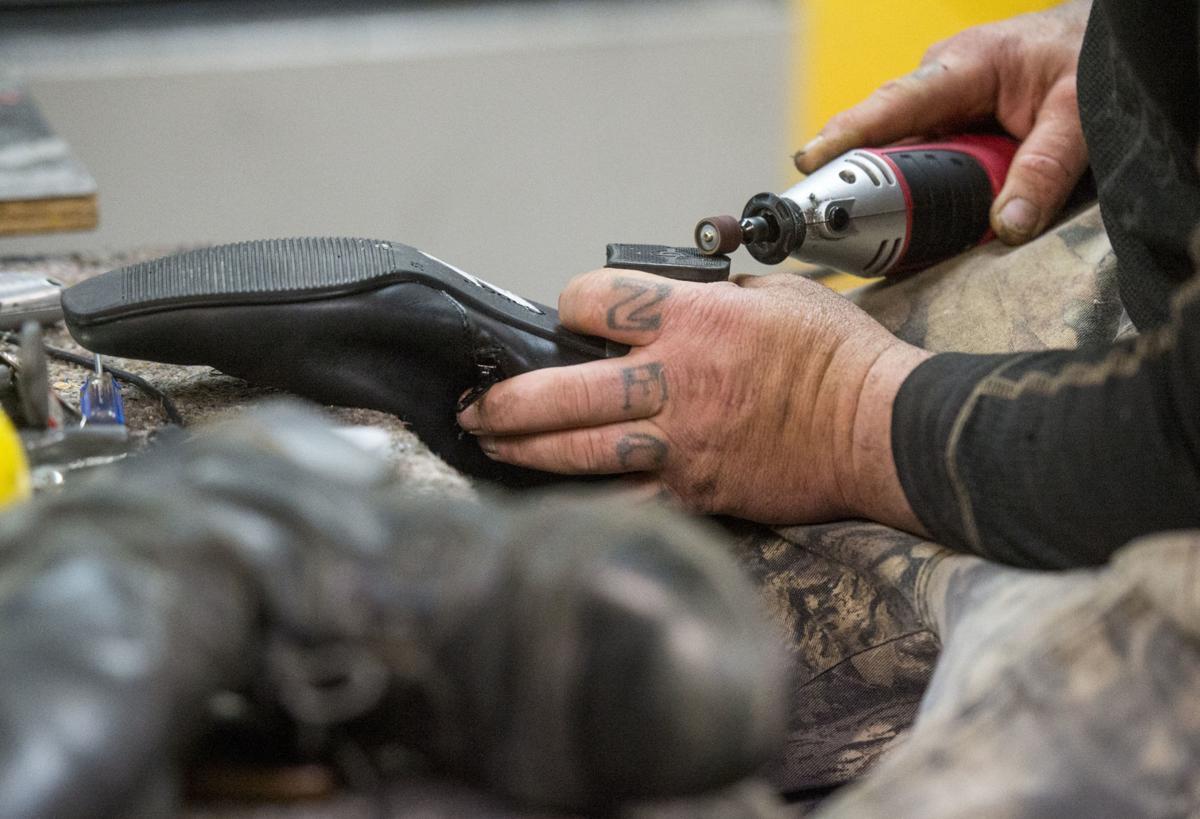 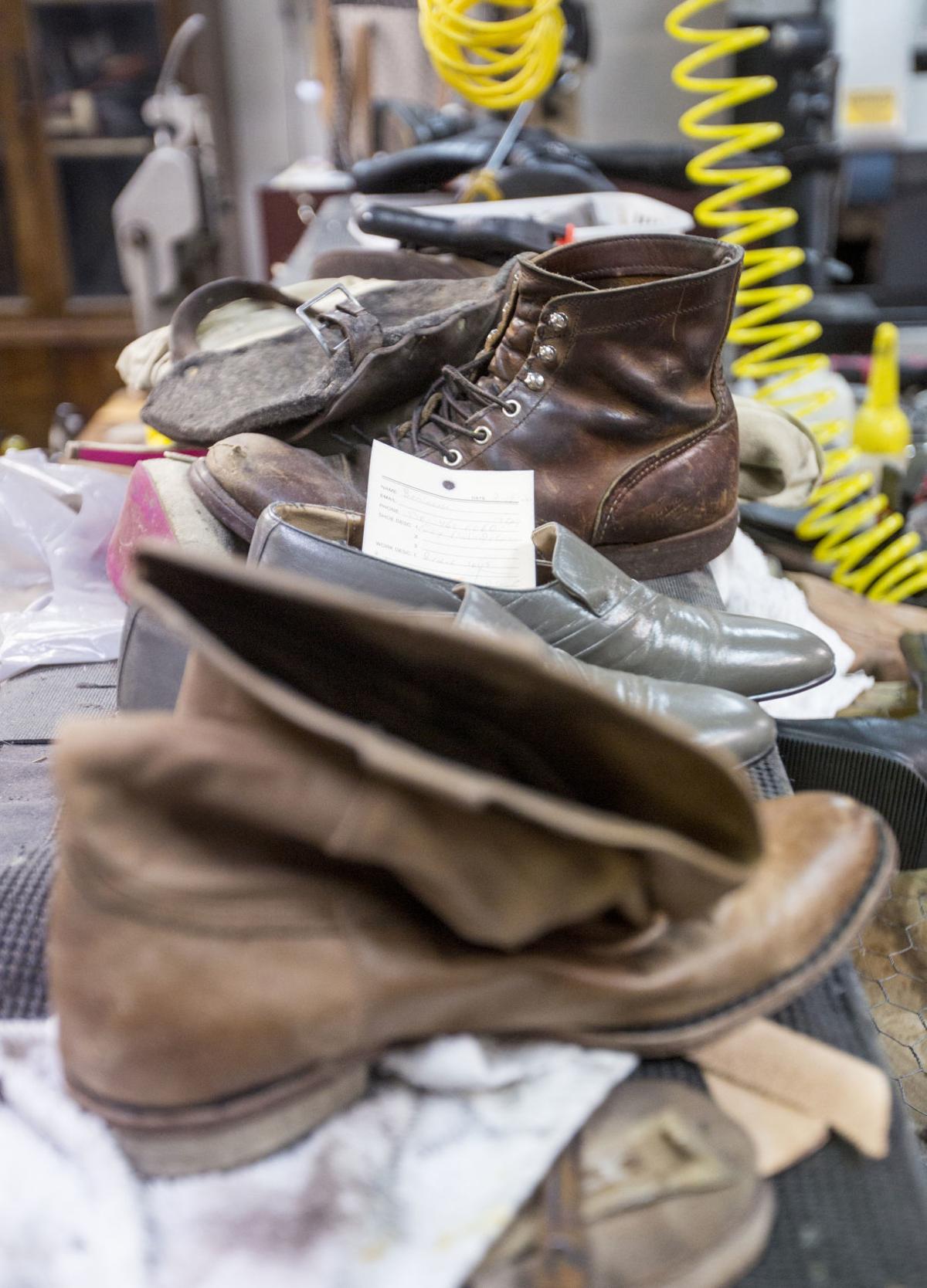 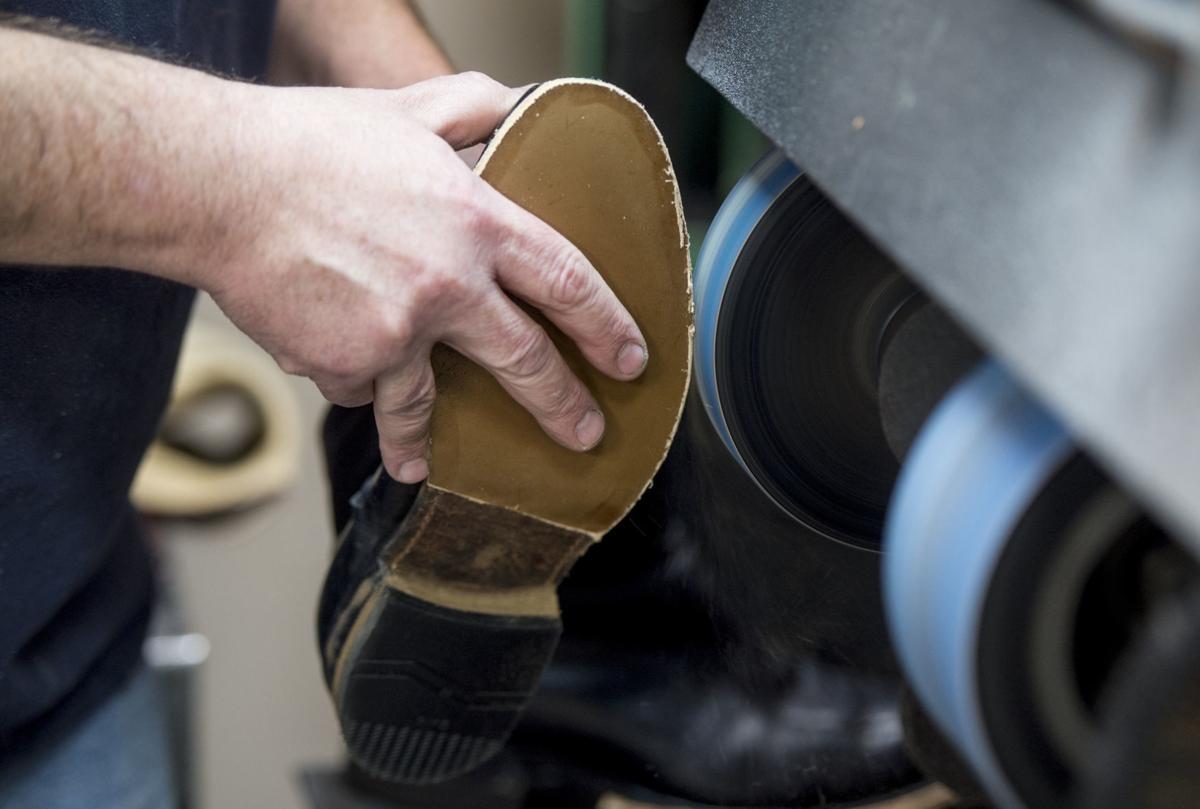 Rocktown Shoe Repair owner Corey riddle sands down the edge of a shoe that received a new sole. 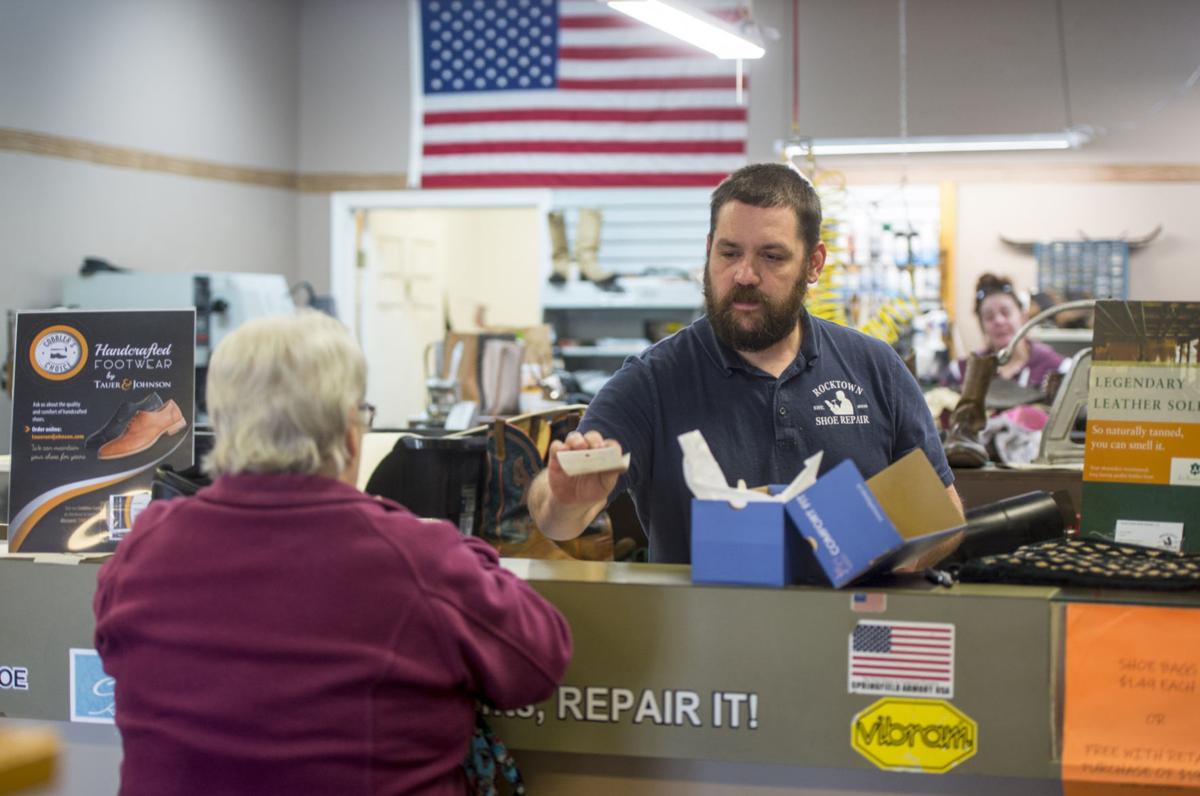 Rocktown Shoe Repair owner Corey Riddle hammers the heel of a customer’s boot in his Harrisonburg shop on Friday.

Rocktown Shoe Repair owner Corey Riddle sands down the edge of a shoe that received a new sole.

Rocktown Shoe Repair owner Corey riddle sands down the edge of a shoe that received a new sole.

There’s this smell, and it’s tough to put your finger exactly on what it is.

Could be the leather; maybe it’s the rubber; possibly, it’s the glue. Just don’t go looking for help from the two guys working at Rocktown Shoe Repair.

“Can’t smell it,” says Nathan Waggy, taking a break from putting a new zipper on a thigh-high pair of black boots.

Neither can owner Corey Riddle.

Much like everything else in this strip-mall shop that sits in the shadow of the under-construction Atlantic Union Bank Center, it’s just something you get used to.

There’s the tedium of slowly doing what Waggy has his nose buried in on this Friday, carefully cutting along the edges of the zipper with a seam ripper, removing the old and getting to work on the new.

It involves clamps, it involves deft skill and dipping a cotton swap into some stinky glue.

“You’ve got to make sure all the stuff lines back up again when you put the zipper in,” the easygoing Waggy says. “If everything goes good, it takes a couple of hours.”

Then it’s back to the assembly line of detailed work.

A pair of boots that need to be stained.

Some shoes that need to be edged.

“In between, we’re putting on heel taps,” Waggy says. “Dude, we’re like two weeks booked up.”

A quick Google search shows that cobblers aren’t dotting the local-business landscape. Riddle says he’s seeing customers coming in from all parts of the Valley and the Piedmont to fix purses, messenger bags and camera straps along with the ever-present shoes and boots lining the work station in front of Waggy.

The shop owner leans against the front counter, taking a break after helping a walk-in customer pick the right size of laces for her shoes. His smile is infectious, his laugh addictive. His path into this business was traditional — training under a ready-to-retire cobbler before taking over the shop as his own.

And here, they’ll work on anything. Expect those darn $300 basketball shoes that cost quarters to make overseas.

“Hate working on them,” Riddle says.

When Jim and Scott Hughes owned this place, Riddle came over to get some extra money in his pocket when his hours were cut in the maintenance department at Graham Packaging.

When the Hugheses were ready to walk away, Riddle took the shop over. If that sounds old school, it is.

As cobblers age and start to retire, it’s hard for them to find people with interest in shoe repair to take over, says Phil Wadzinski, vice president of the Shoe Service Institute of America.

“A lot of the cobblers that are out there have now been at it for a good long time,” he says from his Green Bay, Wis., office. “Can they find qualified persons to either purchase their business or come in and take over? That’s the question.”

That’s how it worked out for Riddle, turning a part-time job into a full-time career and bringing on board his old friend from Graham, Waggy, who works three to four days a week at the shop and the rest of the time at his uncle’s Keezletown farm.

The decline in the number of cobblers has a lot to do with living in a “throwaway society,” Wadzinski says.

It’s simple. People are wearing shoes until they’re worn out, opting to buy a new pair instead of getting them fixed.

“But we’re turning a corner here over the last half-a-dozen years,” Wadzinski says. “Younger people are getting interested in shoe repair.”

The environmentally conscious movement of repurposing items could also play a role.

Riddle and Waggy say they’re seeing more people bringing in shoes purchased at secondhand shops along with older pairs found in the back of the closet.

“‘These are my favorite pair,’” Riddle says. “I love hearing that.”

“It’s been around since the advent of time almost,” he says. “Shoe repair, in itself, is probably one of the original recyclable industries in the world.”

Back in the shop, recycling worn shoes is exactly what Waggy and Riddle are doing — or at least trying to do as the phone calls roll in and customers open the door to a soothing chime.

“You’ve got to make them look good,” Waggy says, dabbing more glue to the underside of a seam on those thigh-high black boots. “If they don’t look good, people see it right away.”

Done with the customer, Riddle walks over, that smile still on his face.

“We’re making this work,” he says. “I’m not getting rich doing shoe repair, but I’m not starving either.”

He pats his belly and lets out a laugh.