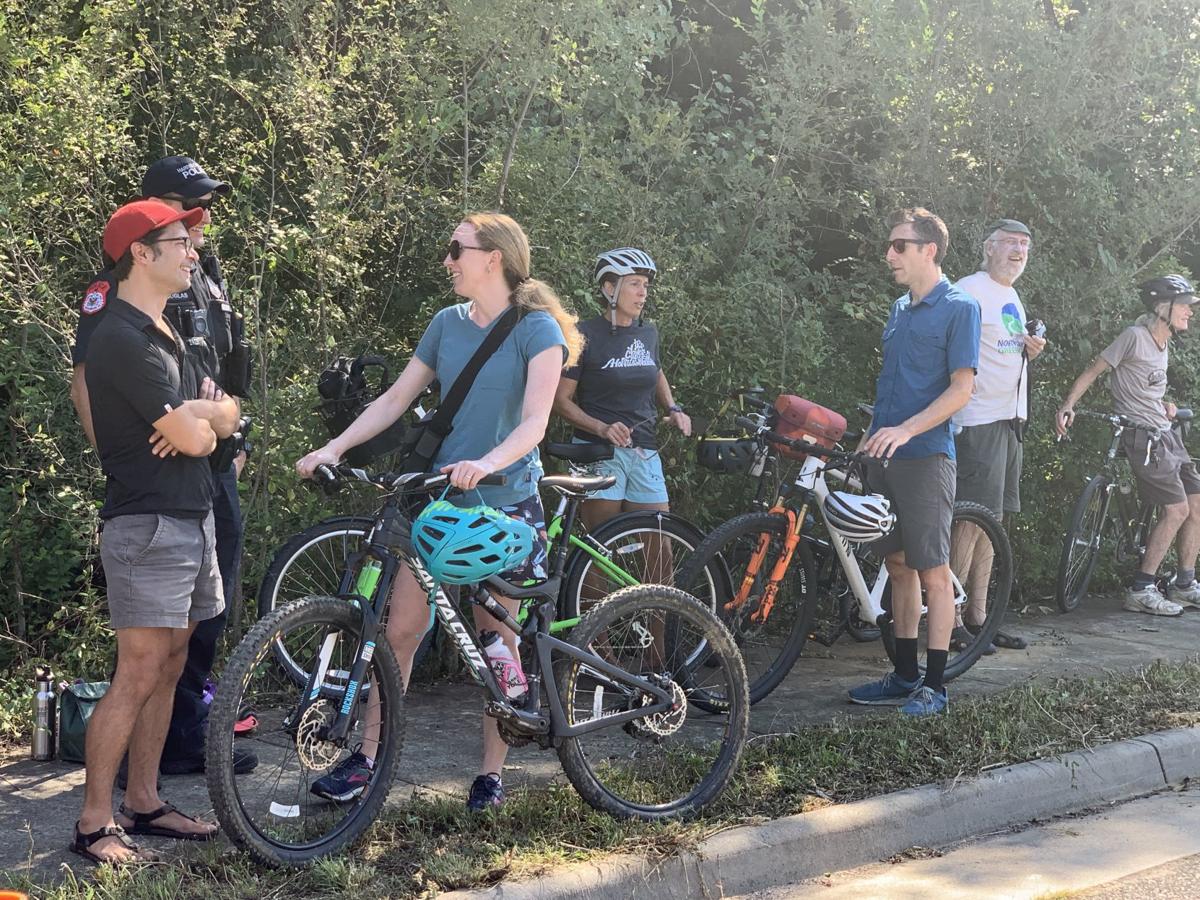 Community members gather to celebrate the opening of Phase 1 of the Northend Greenway and ride through the 0.6-mile path on Wednesday in Harrisonburg. 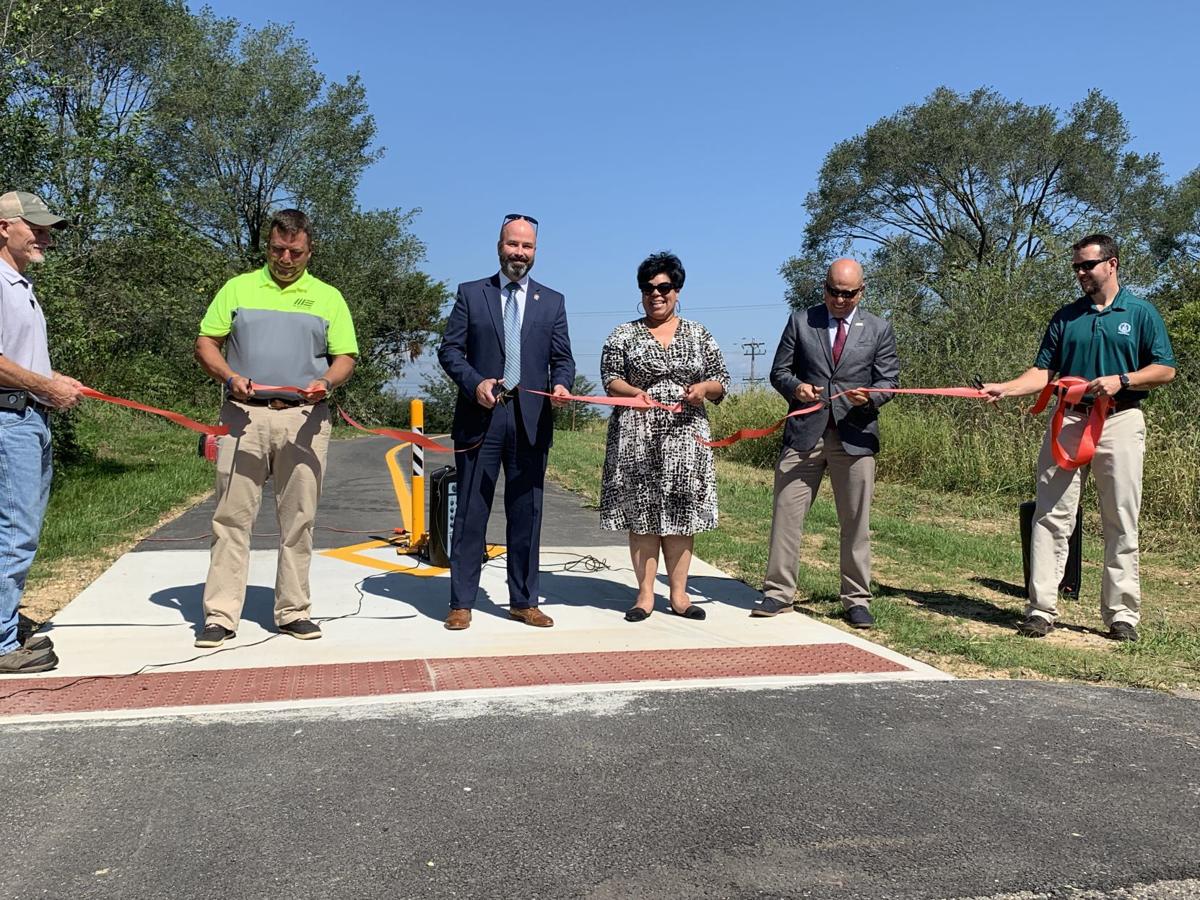 Community members gather to celebrate the opening of Phase 1 of the Northend Greenway and ride through the 0.6-mile path on Wednesday in Harrisonburg.

HARRISONBURG — It was a beautiful day for the community to take its inaugural trip through the completed first phase of the Northend Greenway.

Wednesday morning, city staff, council officials and community members gathered at the intersection of the Northend Greenway and Suter Street to celebrate the official opening of the 0.6-mile path with a ribbon-cutting.

Tom Benevento, a member of the Northend Greenway Steering Committee and part of the New Community Project, was one of the few community members who, in 2010, began planning the north/south greenway spine anticipated to stretch across the entire city.

“Greenways are truly long-term gifts to a community and to the planet,” Benevento said at the ceremony. “They create safe places to bike, walk, wheel, run and stroll. Greenways ground us to the place we live in and on — and to our neighborhoods.”

In 2011, the New Community Project, which is a nonprofit organization that focuses on environmental sustainability and social justice, came to Harrisonburg’s City Council to amend the City Bicycle and Pedestrian Plan to include the Northend Greenway.

By 2012, the nonprofit raised $90,000 and by 2013, the city was given $600,000 from the Virginia Department of Transportation Revenue Sharing Funds with council matching the amount, totaling $1.2 million.

With the help of Momentum Earthworks designing Phase 1 of the Northend Greenway, construction began in December 2018.

The first phase begins at the intersection of Mount Clinton Pike and Virginia Avenue to the end of Suter Street near North Liberty Street and parallels Blacks Run.

Momentum Earthworks also helped with the stream restoration, which will reduce phosphorous, nitrogen and sediment runoff.

The city is expected to break ground on the stream restoration soon, according to Director of Public Works Tom Hartman.

Hartman said it takes all 800 city employees to deliver 0.6 miles of trail.

“It’s kind of a monumental thing when you think about everybody who was a part of the project, which is pretty cool,” Hartman said.

When fully completed, the Northend Greenway will be a 2.5-mile path that connects the Virginia Mennonite Retirement Community, Eastern Mennonite University, The Salvation Army, through the Northeast Neighborhood, past Our Community Place and through downtown before finally reaching James Madison University and the Bluestone Trail.

“Harrisonburg’s Northend Greenway is special because it was designed to connect Harrisonburg’s diverse community, specifically to increase equity and inclusion,” Benevento said.

Mayor Deanna Reed also spoke during the ceremony and congratulated all who had a dream for the Northend Greenway and got involved in the project to make it a reality.

“This greenway is a result of people coming together for the good of the community,” she said.

Reed said she believes the path will have an impact on the city and will provide opportunities to come together as a community.

“When greenways are designed to connect to places we need to go, they make transportation affordable for all,” he said.

He noted that according to the Federal Highway Administration, nationally the average four-lane highway costs $50 million a mile while a greenway costs around $1 million per mile.

“Just imagine Harrisonburg with one more mile of highway, or 50 miles of connecting greenways,” he said.

There is no schedule or funding for Phase 2 of the plan yet, according to Director of Communications Michael Parks, but city staff are continually working with stakeholder and funders to obtain the resources needed to continue building the greenway.