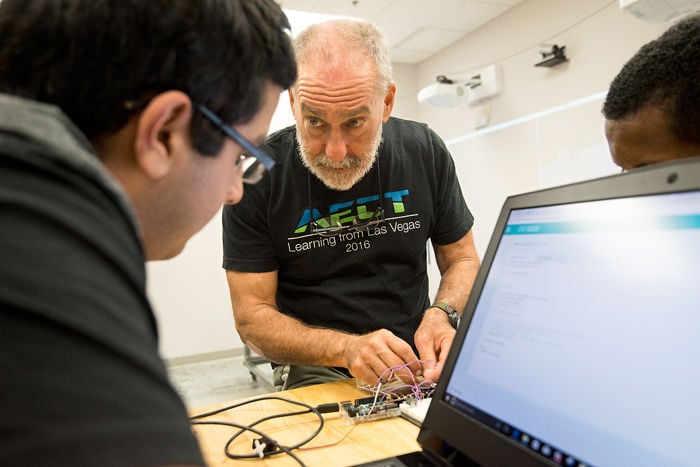 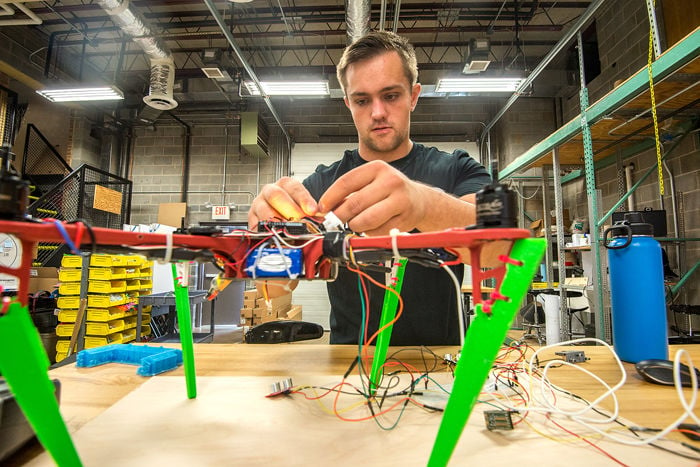 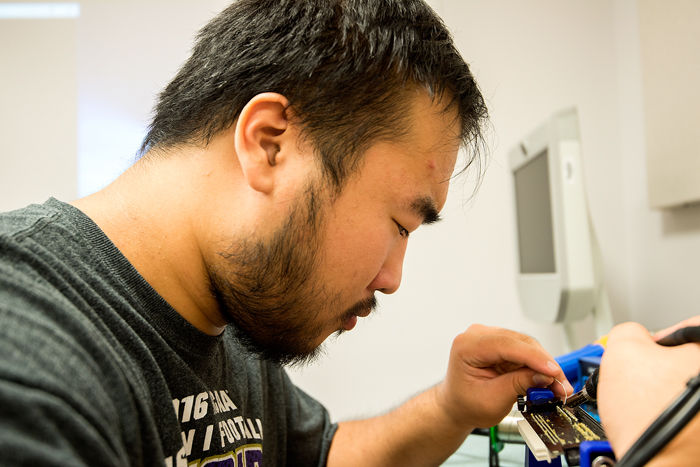 Richard Xu, a JMU senior, solders a circuit board at JMU’s X-Labs on Friday. The space allows students to hone skills that can translate into businesses.

Richard Xu, a JMU senior, solders a circuit board at JMU’s X-Labs on Friday. The space allows students to hone skills that can translate into businesses.

JMU’s X-Labs received the Governor’s Technology Award for innovative use of technology in education last week, according to a press release from Gov. Terry Mcauliffe’s office.

X-Labs is a work and classroom space in Lakeview Hall. It allows students to use technology to tackle real-world problems, said Nick Swayne, director of JMU’s 4-VA, which encompasses the facility.

“They don’t have 3-D printers or laser cutters in their dorm rooms,” he said. “So, they need to have a space to do their homework.”

The classes are outside the typical curriculum, Swayne said. For example, students are creating drones that can survey streams or detect land mines and medical students are studying ways to combat the opioid epidemic.

“We keep looking for new problems to solve,” Swayne said.

He said X-Labs started about 5 years ago after Virginia’s colleges were challenged by the state to create “more economic impact.”

It was first housed in the Festival Conference and Student Center but soon expanded to create a usable work space for students.

“We don’t have any dedicated rooms on campus that are like a drone room,” Swayne said. “All of our labs are shared space and you can’t just leave a bunch of expensive drones sitting out.”

Any students can take classes offered in X-Labs, but Swayne said most don’t hear about it until the end of their freshmen year.

Swayne said the technology allows professors to lecture and access a rover with a camera and screen. The rover moves around the class and allows personal interaction between students and the professor.

It’s equipped with cameras to get a closer look at projects.

“They’ll walk right up to it ... and ask questions,” Swayne said.

The space allows students to hone skills that can translate into commercial uses, Swayne said.

“Economic impact comes in many different ways,” he said. “When we start to get students to solve problems, then they start businesses.”

Some of the demand for skills may not exist yet.

“People pay you for a service they need,” Swayne said. “If there was a problem that you wanted solved, people will pay you for that. Like an app, write an app. If people like it, they buy the app.”

The Virginia Cyber Range also won the Governor’s Technology Award for innovative use of technology in education.

The Cyber Range provides courses and a cloud-based exercise area for cybersecurity labs and exercises. Edna Reid, a JMU associate professor of intelligence analysis is a member of its executive committee.