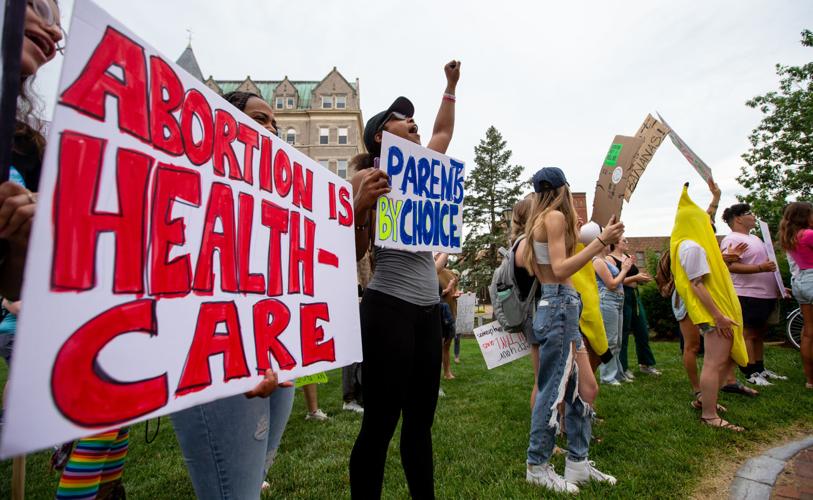 Protesters chant during a women’s reproductive rights rally at Court Square on Saturday. 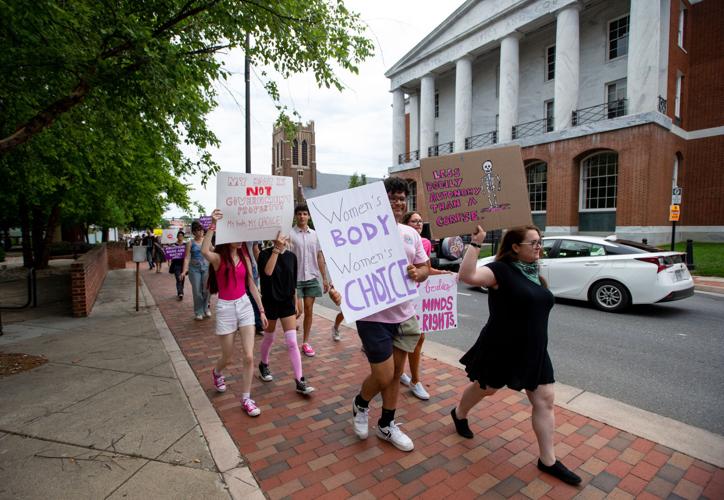 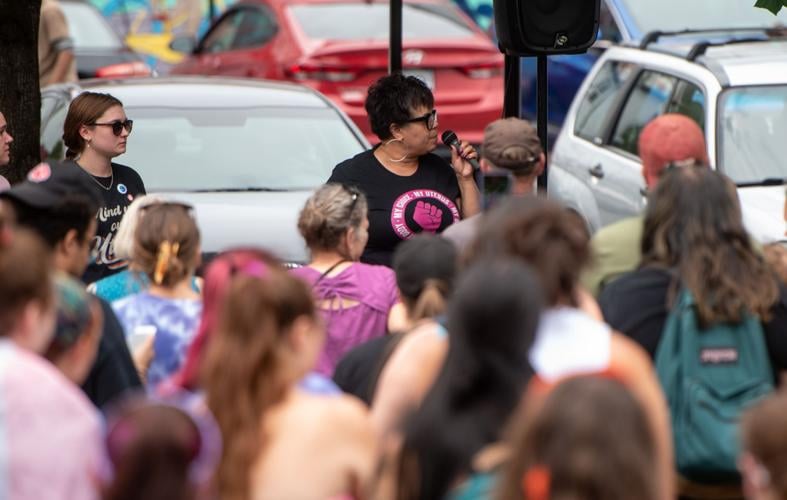 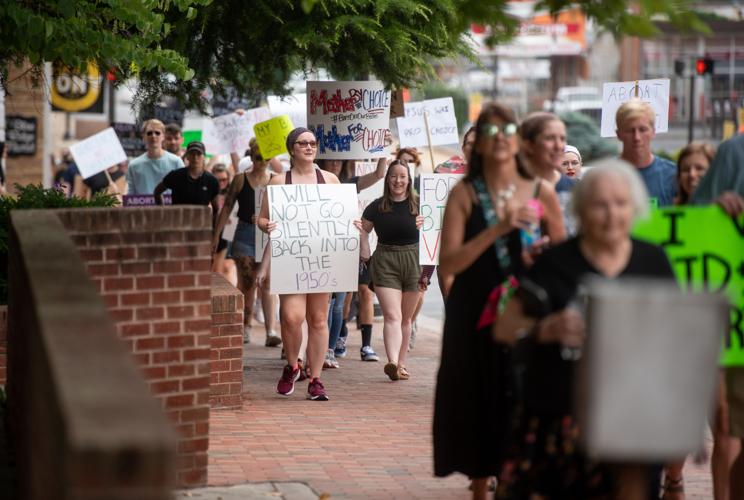 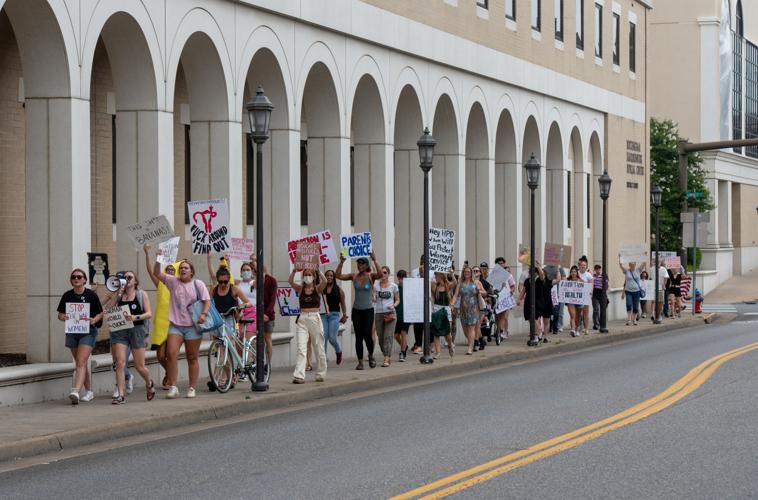 Protesters march down toward Court Square in support of women's reproductive rights Saturday. 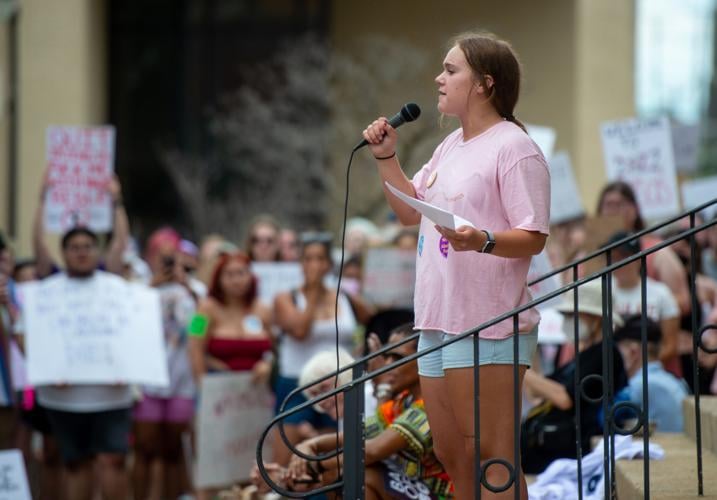 JMU student Maddie Schiller, one of the organizers of Saturday's women's reproductive rights march, speaks on the steps at Court Square. 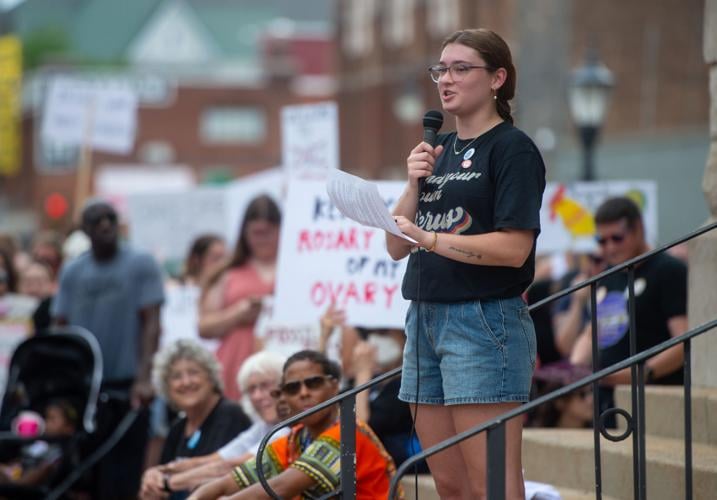 Bridgewater College student Eva Merical, one of the organizers of Saturday's women's reproductive rights march, speaks on the steps at Court Square. 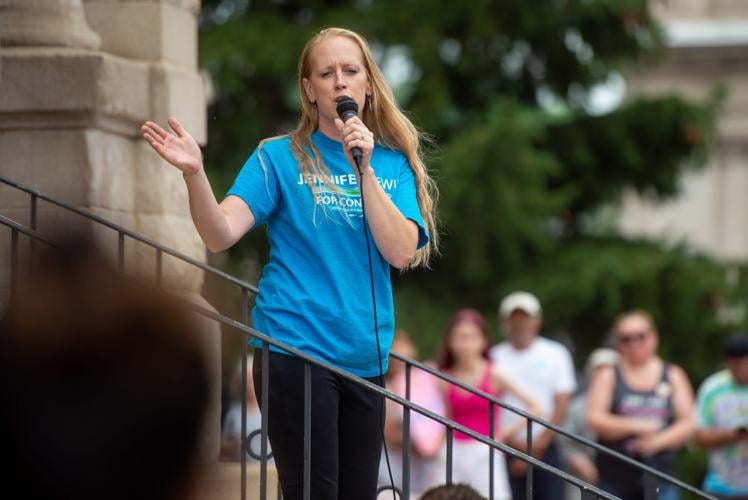 Protesters chant during a women’s reproductive rights rally at Court Square on Saturday.

Protesters march down toward Court Square in support of women's reproductive rights Saturday.

JMU student Maddie Schiller, one of the organizers of Saturday's women's reproductive rights march, speaks on the steps at Court Square.

Bridgewater College student Eva Merical, one of the organizers of Saturday's women's reproductive rights march, speaks on the steps at Court Square.

The sound of marchers chanting “my body, my choice” echoed through downtown Harrisonburg on Saturday.

Hundreds of people gathered in a walk supporting reproductive rights over a week after the U.S. Supreme Court overturned Roe v. Wade, which eliminated the constitutional right to an abortion. This leaves abortion legislation up to the states.

The march began at Liberty Park, made a loop through downtown and ended at the Rockingham County Circuit Court and Clerk’s Office in Court Square. Community members of all ages listened to those who took the mic on the courthouse steps.

Two of those who spoke were the organizers of the march — Eva Merical and Maddie Schiller. Merical is a student at Bridgewater College and Schiller goes to James Madison University. They said they’ve never organized a march like this before, but they noticed there weren’t any marches going on in the community and decided to take things into their own hands.

“It just started with the discussion,” Merical said. “We said, ‘We should really try to organize something.’ So we did.”

Merical said she was “extremely upset” following the Supreme Court’s decision and felt that action needed to be taken. Though abortion is mostly legal in Virginia, she said it’s going to become more difficult now that state legislators can restrict access.

Abortion is currently legal in Virginia during the first and second trimesters of pregnancy, with third-trimester abortions legal only if the mother’s health is at serious risk. In a statement, Gov. Glenn Youngkin expressed his support for the Supreme Court’s decision and called on Virginia lawmakers to write anti-abortion legislation to be introduced to the General Assembly in January 2023.

“Abortion is health care and it saves so many lives,” Schiller said. “The government is not allowed to tell women what they can and cannot do with their bodies.”

Schiller said they garnered support from Mayor Deanna Reed, the Harrisonburg Democratic Committee and more to make the protest happen. Merical said it was “touching” to see the number of people who gathered and marched downtown.

At Liberty Park, Reed encouraged those attending to make their opinions known to state politicians and to vote in this year’s general election.

“It doesn’t start with us as as local government,” Reed said. “At the state level, we’ve got to do it. It’s not even a negotiation anymore.”

While on the courthouse steps, Democrat Jennifer Lewis, who will run against Republican Ben Cline for the 6th Congressional District in November, spoke about her experiences as a rape crisis counselor and as a volunteer for the Blue Ridge Abortion Fund in Charlottesville. She said her passion for abortion access comes from these experiences and seeing everyone at the march further motivates her to run for office.

Lewis also made comments on Cline, saying that though he says he’s pro-life, his actions contradict this claim.

“It’s so funny that he considers himself pro-life and uses #lifewins when he voted against a baby formula bill, he voted against Medicare for all — he votes against literally everything that’s pro-life,” Lewis said, generating boos from the crowd.

Valerie Washington, intake coordinator with the Blue Ridge Abortion Fund, also spoke on the courthouse steps. She said people seeking abortions from other states will come to Virginia to get abortion access, which may make it up to eight times harder to get an abortion in the state. She encouraged people to donate to abortion funds and volunteer, because the Blue Ridge Abortion Fund has already seen an uptick in callers.

Merical and Schiller said they’d like to organize similar local events in the future to get people involved.

The pieces of advice the speakers gave to the crowd were to have meaningful conversations about abortion, volunteer, donate and vote.

“Every gender, race and sexuality — everybody was here,” Schiller said. “It was awesome.”

Isaiah prophesied doom for Babylon, including the murder of unborn children: "They will have no pity on the fruit of the womb" (Isaiah 13:18).

A pregnant woman who is injured and aborts the fetus warrants financial compensation only (to her husband), suggesting that the fetus is property, not a person (Exodus 21:22-25).

For rebelling against God, Samaria's people will be killed, their babies will be dashed to death against the ground, and their pregnant women will be ripped open with a sword (Hosea 13:16).

The gruesome priestly purity test to which a wife accused of adultery must submit will cause her to abort the fetus if she is guilty, indicating that the fetus does not possess a right to life (Numbers 5:11-31).

God will punish the Israelites by destroying their unborn children, who will die at birth, or perish in the womb, or never even be conceived (Hosea 9:10-16).

A medical lab catches fire and there are 100 test tube babies and 1 born baby, which one would you save first?

Since you’re implying that they can all be saved, the order doesn’t matter now does it?

just asking which one would you save first

A coolman makes some dumb statements....do we retort or just let the stupidity die?

You can bet that every one of those phonies who is holding a “my body, my choice” sign also demanded, not so long ago, that we ALL have NO choice but to take a vaccine into our body that we did not want. Typical liberals, once again, wearing their shameless hypocrisy like a badge of honor. All of the women there have every right to keep their legs closed. All of the men there have the right to keep their zippers up. No one can stop them from choosing to engage in the only activity on earth that results in another human life being created. They have that CHOICE. That is where the choice is made, the bedroom, not Planned Parenthood. No college educated person there understands the decision is not about abortion but the fact that, 50 years ago, a corrupt SCOTUS robbed states of their constitutional right to settle matters like abortion themselves. All these students care about is being able to have sex as much as they want with none of the responsibility of having it. Sexual intercourse is a consequential act, these students fail to respect that. These marchers need to recognize that, despite the SCOTUS properly returning this matter to each state, that they can all still choose to slaughter their unborn child, in Virginia, after they get drunk, and freely CHOOSE to have sex, likely without protection. If you don't want to create a human life, don't engage in the act that creates human life. It's not that difficult.

Looks like the Mayor Deanna Reed is rally starting to show her true self....