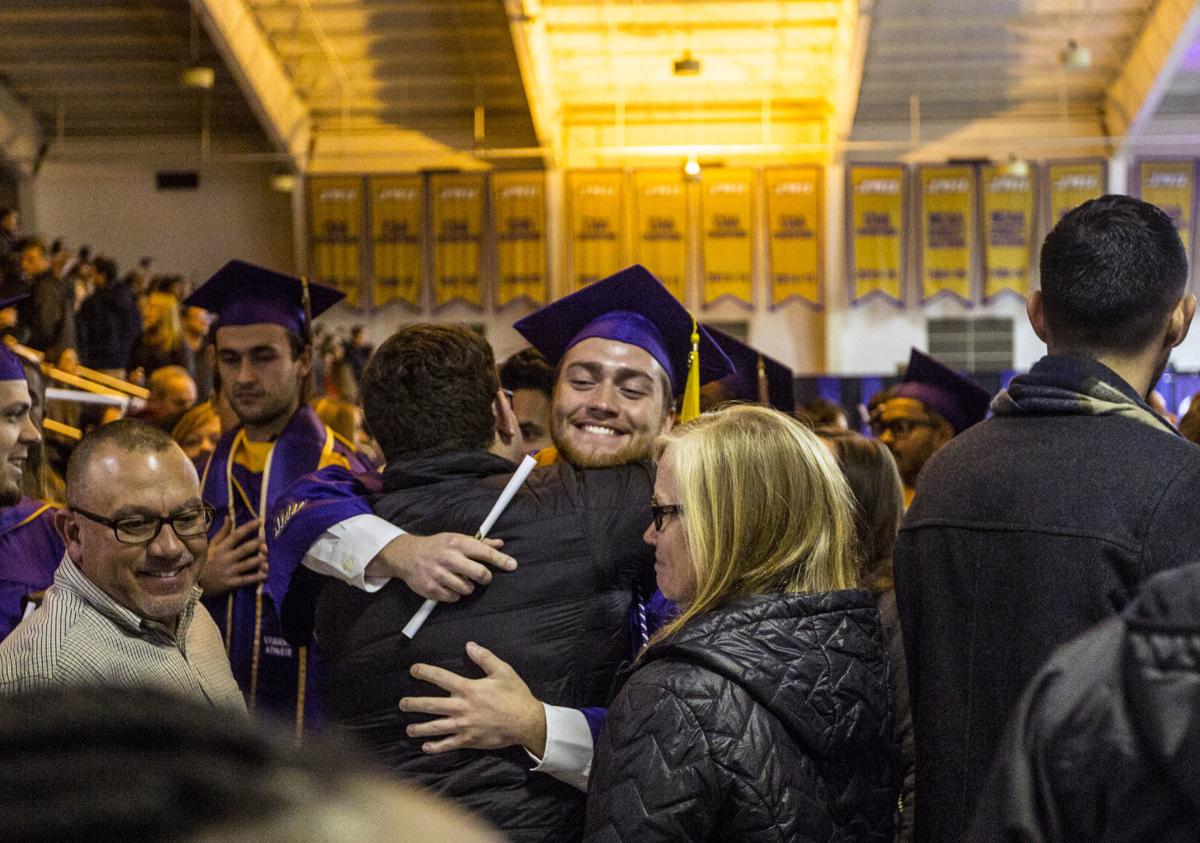 JMU kinesiology graduate Garrett Zinnecker, of Fredericksburg, hugs friends and family after the fall commencement ceremony on Saturday in Harrisonburg. 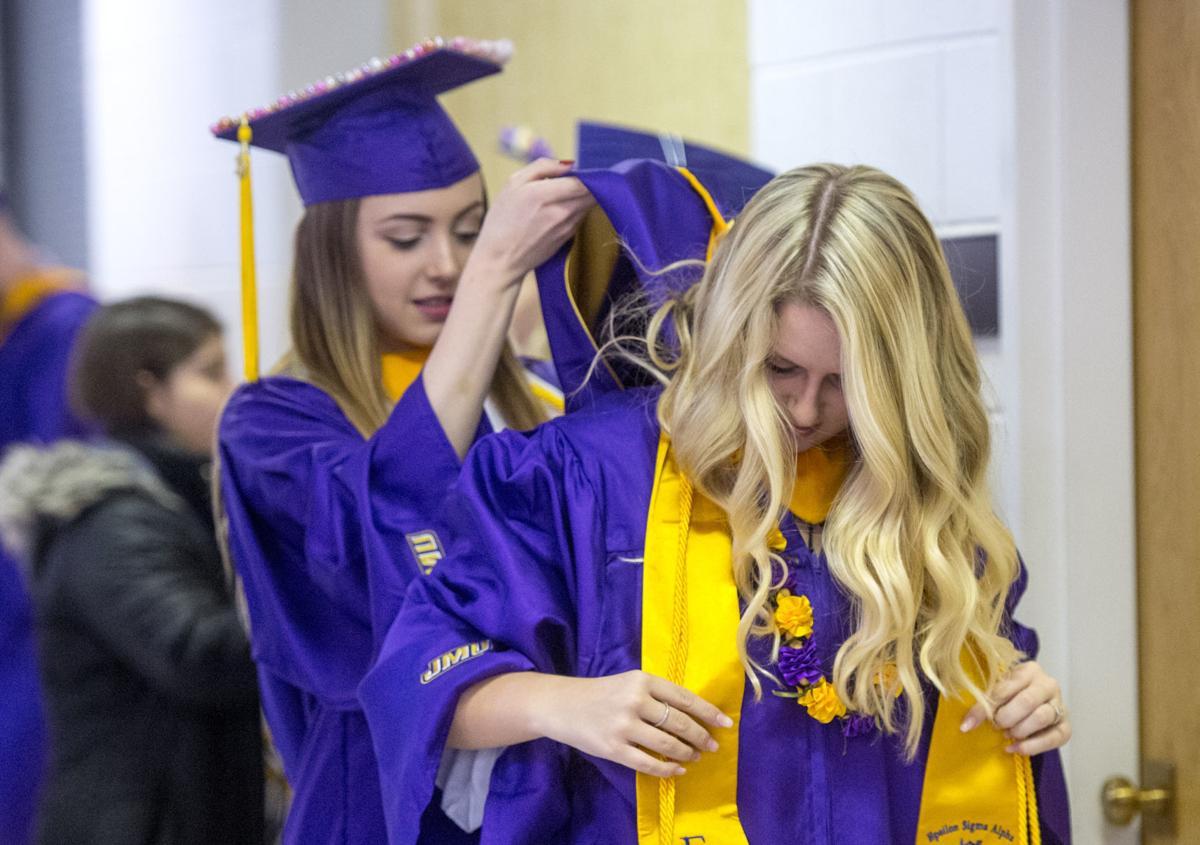 JMU communication sciences and disorders majors Kaleigh Johnson, of Stafford, left, and Sydney Brown, of Roanoke, fix each others gowns before the start of the commencement ceremony Saturday in Harrisonburg. 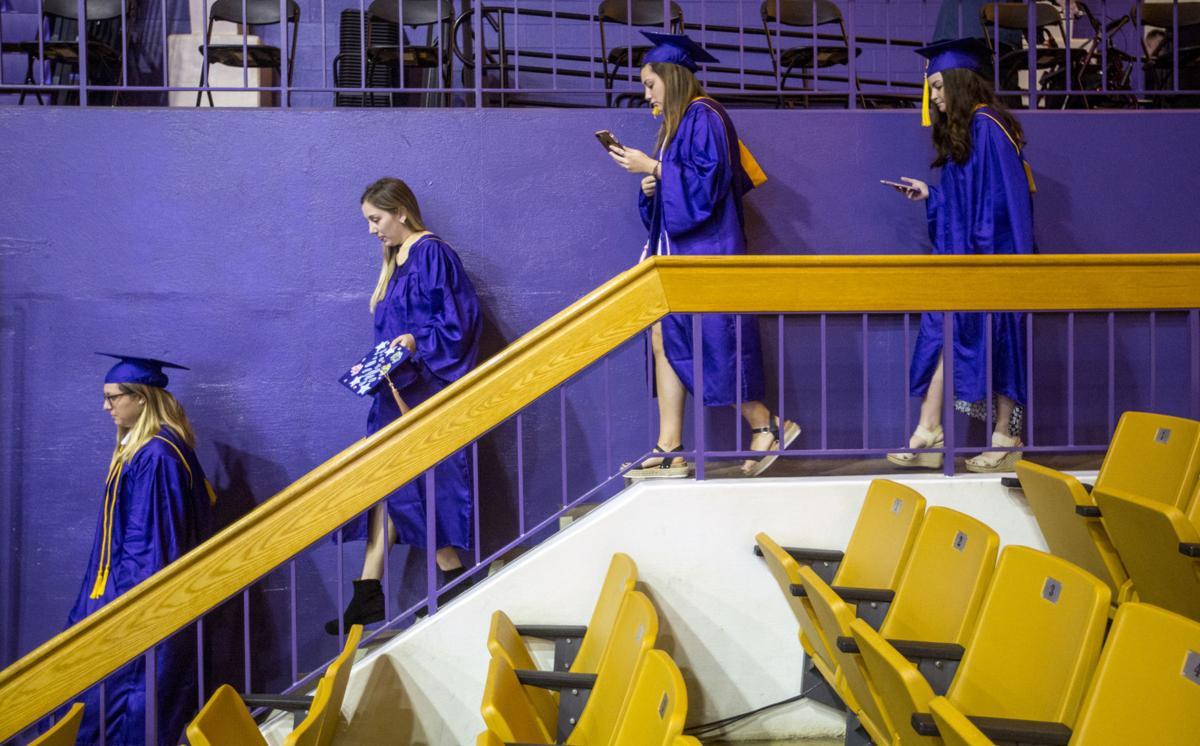 JMU graduates make their way to their seats before the start of their fall commencement ceremony Saturday morning at the Convocation Center.

JMU kinesiology graduate Garrett Zinnecker, of Fredericksburg, hugs friends and family after the fall commencement ceremony on Saturday in Harrisonburg.

JMU communication sciences and disorders majors Kaleigh Johnson, of Stafford, left, and Sydney Brown, of Roanoke, fix each others gowns before the start of the commencement ceremony Saturday in Harrisonburg.

JMU graduates make their way to their seats before the start of their fall commencement ceremony Saturday morning at the Convocation Center.

On Saturday, she was finally able to take part in one.

Ciccone’s journey at JMU began before she was a student there — working for the Office of International Programs in 2012. She later transferred to University Events where she has been since 2016.

In 2013, she enrolled in the Adult Degree Program, where she continued to work full-time as a university employee.

“From 2012 to now, I continued to take classes every semester, including summer semester,” she said. “The experience has had its challenging moments due to working full-time and having children and a family, however, I kept the momentum of finishing my degree throughout the challenging times.”

Ciccone, 30, of Timberville, said one of those challenging times was when her father died from cancer in 2016.

“The semester that my father passed away, there was one course that I simply had to drop due to my family situation,” she said. “This was hard for me because I knew dropping this course would set me back another semester, however, I simply needed to be there for my mother and family.”

Throughout the last seven years, her evenings were filled with homework while caring for her family, but the years of organization and time management proved to be in her favor as she received her Bachelor’s in Science with a concentration in Business and Human Resource Management.

Despite becoming a JMU alumna Saturday, Ciccone could be seen still working as she walked around in her cap and gown.

“Being an event planner, there is a lot going through my head of logistics and small details that we want to make sure are implemented,” she said. “Although I walked on Saturday, I was still thinking of all the commencement tasks that would need to be completed throughout the event.”

Ciccone said she plans to continue working at JMU in University Events and thanked JMU President Jonathan Alger and his wife, Mary Ann Alger, for being supportive of her during her academic career.

The road to graduation is different for everyone, and for Grace White, 22, of Norfolk, it all started within the Centennial Scholars Program.

When White was in high school, JMU was her dream college, but the thought of affording it “seemed impossible.” She was the first person in her family to attend college and felt like an outsider at times due to her first-generation status.

She researched scholarships until she came across the Centennial Scholars Program, applied, had an interview and was later accepted into the program — joining a group of under-represented students that would not be able to attend college without the support of the program, said White.

“Being a Centennial Scholar means you have loads of support, and not just financial support,” White said. “I have received unlimited emotional support from the CSP staff, mentors and other students in the program. We are truly a family in CSP and that is something that I could not have gotten through college without.”

On top of pursing her nursing degree, White also had to complete 50 hours of community service each semester as part of the CSP. She volunteered for the Office of Disability Services, the CSP office and was a “big buddy” in CSP, mentoring underclassmen in the program.

“Community service means giving back,” White said. “I am given the resources and good health to be able to help my community, and so I try to do what I can to make the place around me better. I think that everyone has times in life where we all need a little help and someone to lean on, so I try to be that person for those around me.”

White said she plans to continue being active in her community as she returns to Norfolk to work as a nurse at the Children’s Hospital of the King’s Daughters.

Due to racial barriers at the time, Allen was barred from attending what was then Madison College.

“She should have been a student at Madison College, but today we can accept her in open arms,” Alger said.

Theresa Clarke, professor and head of the Department of Marketing, was Saturday’s commencement speaker. Since 2001, Clarke has taught undergraduate and master’s of business administration students at JMU, specializing in experiential and interactive teaching methods with client-based projects.

Clarke said due to her time in academia, she has worked closely with seniors and understands the whirlwind of emotions that could be felt, such as stress, happiness and sadness.

“All of these feelings are perfectly normal,” she said.

Clarke said her gift to the December Class of 2019 were three straightforward pieces of advice: Be courageous, commit to lifelong learning and find the good in every day.

“Life is short and with courage, you wake up every day willing and wanting to go after opportunities,” she said. “I challenge you to keep on learning and to be that person who is continuing to learn because if you don’t, someone else will and you’re going to get stale and miss opportunities.”

Alger told graduates that as they go forth from JMU, he hopes they continue to dream big and spend their time together opening doors.

“And keep wearing purple wherever you go,” he said. “The bookstore is always open to replenish your supply.”