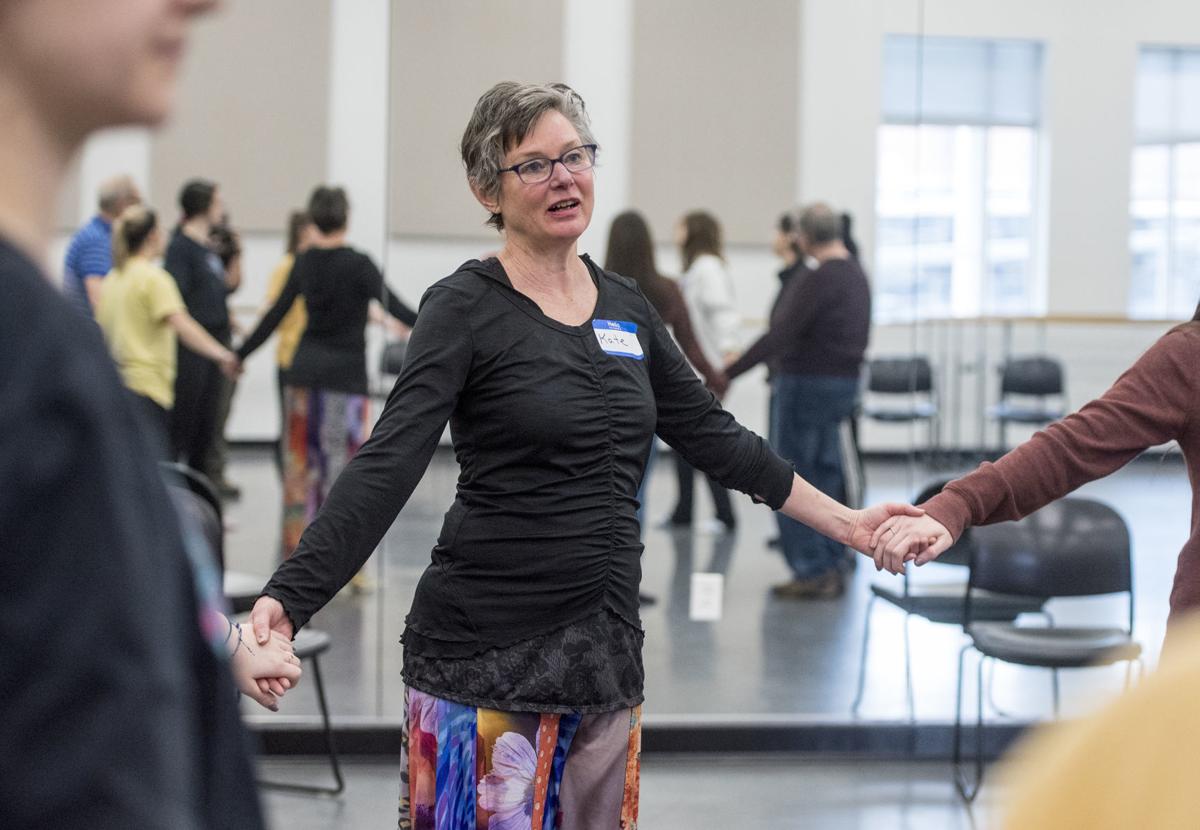 Kate Trammell, a dance professor at James Madison University, leads a Dance for Parkinson’s class at the Forbes Center for the Performing Arts on Saturday morning. 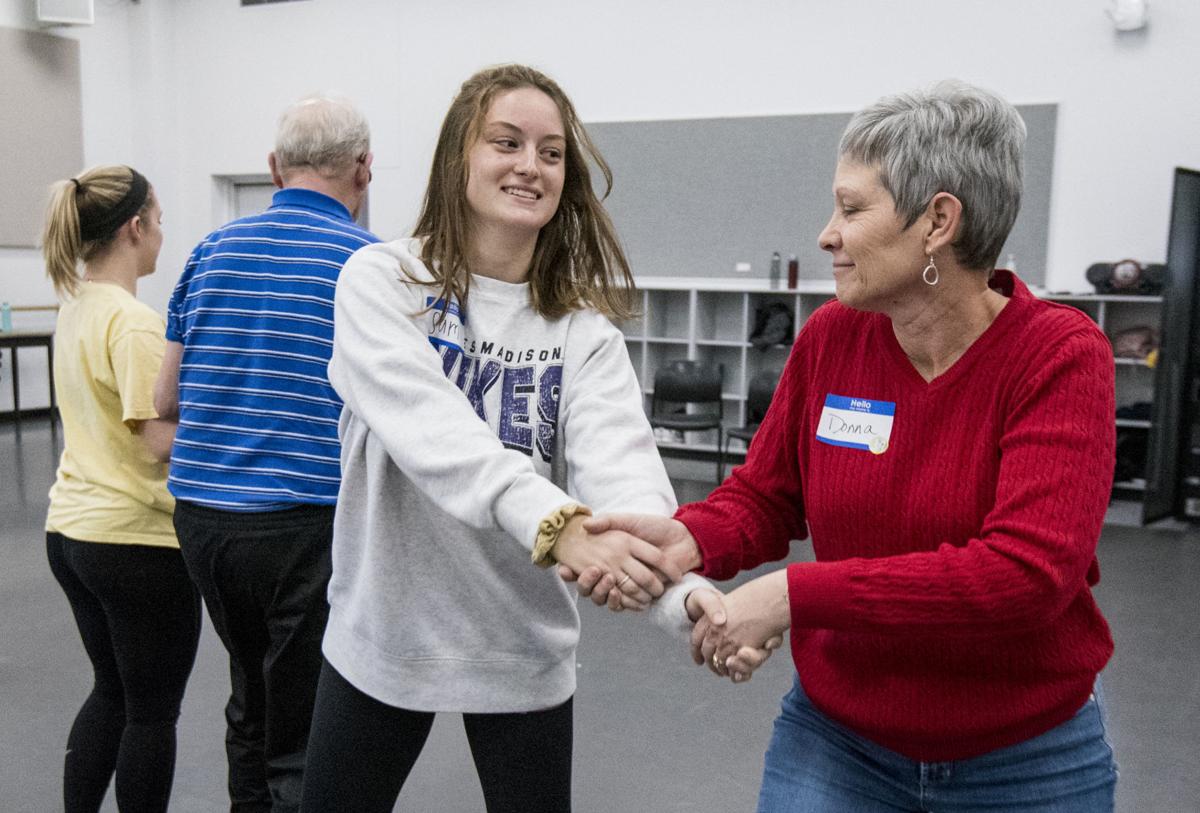 Samantha Slater, a James Madison University student from Virginia Beach, dances with Donna Mast of Harrisonburg, during the class. Mast's husband, Lloyd, has Parkinson's, and the couple enjoy attending the class together. 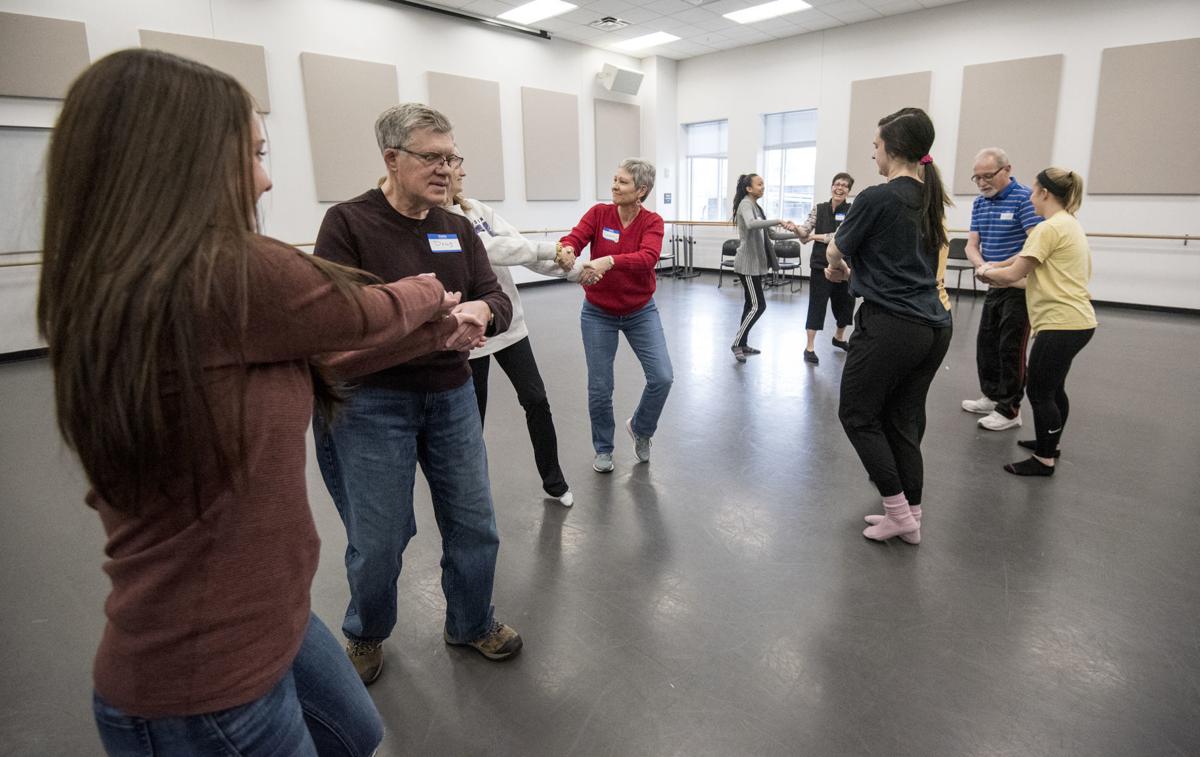 JMU began offering Dance for Parkinson’s classes free to the community on Feb. 16 in the Forbes Center for the Performing Arts.

Kate Trammell, a dance professor at James Madison University, leads a Dance for Parkinson’s class at the Forbes Center for the Performing Arts on Saturday morning.

Samantha Slater, a James Madison University student from Virginia Beach, dances with Donna Mast of Harrisonburg, during the class. Mast's husband, Lloyd, has Parkinson's, and the couple enjoy attending the class together.

JMU began offering Dance for Parkinson’s classes free to the community on Feb. 16 in the Forbes Center for the Performing Arts.

Kate Trammell, a dance professor at James Madison University, became interested in ways she could bridge dance with physical therapy, which is how she learned about the Mark Morris Dance Group.

The Brooklyn, N.Y.-based dance company created an acclaimed program, Dance for Parkinson’s, designed specifically for people with the disease.

“It’s something I’ve been aware of for a number of years,” Trammell said. “I’m interested in work that brings dance into the community and that allows people from all walks of life and all abilities and ages to be involved in dance.”

There are 250 Dance for Parkinson’s programs across 24 different countries.

JMU began offering Dance for Parkinson’s classes free to the community on Feb. 16 in the Forbes Center for the Performing Arts. The program is a partnership between the university’s School of Theatre and Dance, the School of Music and the College of Visual and Performing Arts.

“With Parkinson’s, often, the body can be considered the enemy, but what we like to do is turn that around so that the movements and the kinesthetic awareness becomes an open door rather than a door that closes,” Trammell said.

The class incorporates everything from ballet and tap, ballroom dancing, country line dancing, as well as salsa and tango. Participants need no prior dance experience.

“It’s pretty eclectic, I’d say,” she said. “We draw from many different types of dance movements.”

The program brings together several disciplines, with student volunteers coming from backgrounds in occupational therapy, psychology, dance and music.

Kayla Bolton, a volunteer at the class on Saturday, graduated from JMU with a degree in dance in 2017. She’s pursuing a master’s in physical therapy at ECPI University. Bolton taught a similar class at Virginia Mennonite Retirement Community for stroke survivors and became interested in the JMU class after treating Parkinson’s patients during her clinicals.

“A lot of times, their movements become very minuscule and can cause them to have falls and injuries. So, encouraging the big, large arm movements and the big leg movements, communication between one another, reading people’s facial expressions and being expressive all together is really beneficial for that population,” Bolton said.

Lloyd Mast, 74, was diagnosed with Parkinson’s in July 2012. The Harrisonburg resident said he frequently suffers from slow movements and leg tremors. At the Dance for Parkinson’s class on Saturday, Mast said dancing has helped increase his flexibility and coordination.

During the class, dancers practiced a move where they extend an arm over to reach their opposite side, which he said has improved his ability to tuck in his shirt.

“This helps me with normal, everyday things,” he said.

He has enjoyed waltzing the most. His wife, Donna Mast, 61, also enjoys attending the dance class with him.

“As a spouse of a person with Parkinson’s, this is something I can enjoy as much as he does, which is fun for both of us as a couple to find something that we can do together,” she said.

Those who suffer from Parkinson’s can become isolated and withdrawn. Lloyd Mast said his complications make him more self-conscious in public when his leg tremors cause a table to shake.

“This builds confidence. At the same time, it’s building mobility, flexibility and cognitive [skills],” he said. “It’s not fun to know you have it, but you have to deal with it like with any other situation you have.”

The participants practice a movement where they pretend to throw a snowball and are told to make eye contact. This is meant to build social skills.

Trammell said the program also emphasizes creativity, which she said is healthy for everyone. The class also creates a social dynamic and collaborative environment.

“It’s helpful for them to be in a group of people who understand the impact of Parkinson’s and to be involved in a community of people with Parkinson’s disease,” she said.

The Masts said the live music is an important aspect of the program because it creates the energy in the room.

“The music adds a great touch to it, and [Trammell’s] creativity of movement and the expressiveness and so on that we’re allowed to do creates a good feeling at the same time as therapeutic,” Lloyd Mast said.

Thomas Hassett, a JMU music education major, is one of the students who play the piano during the class. Hassett is able to set the tone, playing fast or slow whenever needed.

“With live music, we’re able to be more responsive,” Hassett said. “The other thing is that you have this human connection with the music. ... It’s more engaging with the class members [than recorded music].”

The 19-year-old said the dance classes relate to his music education program, which focuses on reaching out to the community.

“A lot of what we do in the music education program revolves around engagement and how we can connect with the community and work with different disciplines to expand the horizons of music education,” he said.

The spring dance sessions are part of the pilot program. Trammell said she’ll be applying for grants so classes can be offered again in the future.

, I started on PARKINSON DISEASE TREATMENT PROTOCOL from Akanni herbal centre  (www. akanniherbalcentre .com ). Few months into the treatment, I made a significant recovery. After I completed the recommended treatment plan, almost all my symptoms were gone, had wonderful improvement with my movement and tremors . Its been 6 months since I completed the treatment, I live a better life