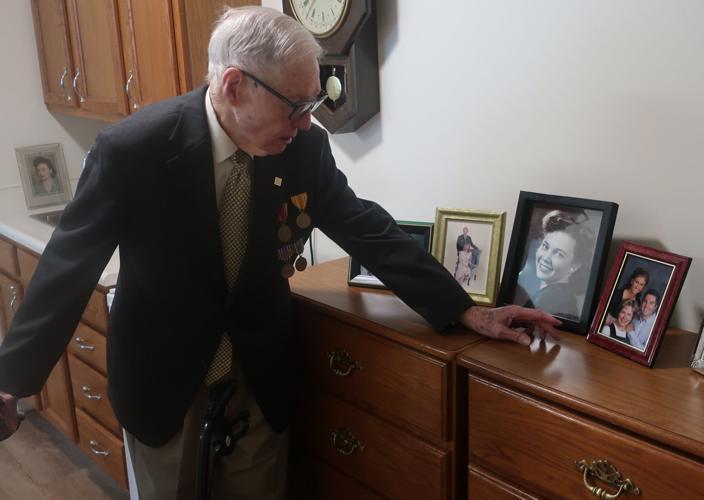 Richard Young points to photos inside his apartment at Virginia Mennonite Retirement Community in Harrisonburg. Young, who survived the attack on Pearl Harbor in 1941, turns 100 on Memorial Day. 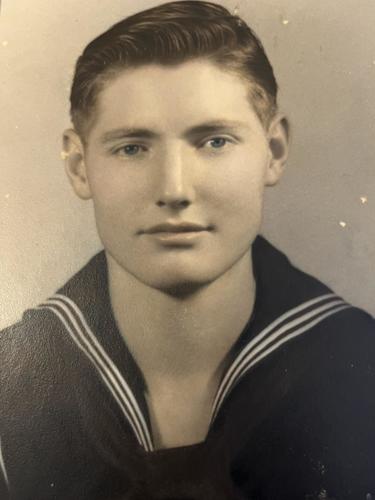 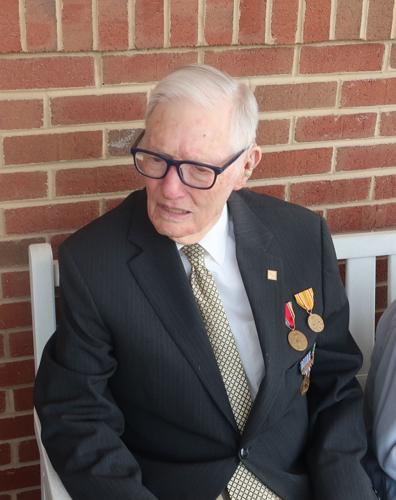 “It was not that we were afraid, or even that we thought that the Japanese could beat us; it was the loss of the ships and the men that tore us up,” Richard Young wrote in his diary after the attack on Pearl Harbor.

Richard Young points to photos inside his apartment at Virginia Mennonite Retirement Community in Harrisonburg. Young, who survived the attack on Pearl Harbor in 1941, turns 100 on Memorial Day.

“It was not that we were afraid, or even that we thought that the Japanese could beat us; it was the loss of the ships and the men that tore us up,” Richard Young wrote in his diary after the attack on Pearl Harbor.

It was in the early morning hours on Dec. 7, 1941, when U.S. Navy Sailor Richard Young noticed explosions and saw planes diving while stationed on the USS Worden.

“They looked unfamiliar and when we looked across the Harbor, we saw great columns of smoke rising,” Young wrote in his diary. “At first we thought it was practice but when we saw USS Utah get hit, we manned our guns immediately.”

Young, 99, and living at Virginia Mennonite Retirement Community in Harrisonburg, survived the bombing of Pearl Harbor.

As Young celebrates his 100th birthday this Memorial Day with his family, he remembers those he served with that did not make it back home.

“It is hard to express the deep sadness that overcame the members of our crew as we steamed out of the harbor that day,” Young wrote in his diary. “We were extremely proud of the Navy, and our hearts would have been broken [if] only one of our great ships had been sunk. But to see all of them either sunk or sinking, and our entire fleet virtually decimated, was almost more than we could bear. It was not that we were afraid, or even that we thought that the Japanese could beat us; it was the loss of the ships and the men that tore us up.”

Born in Rapides Parish, La., Young enlisted in the Navy at 19. In the Navy, he served as a sailor on a destroyer, the USS Worden, and in the battles of Pearl Harbor, Midway, Coral Sea and Guadalcanal, and in the invasion of Sicily.

Young wrote in a journal during the attack, he and his younger brother, Herb, were stationed on the USS Worden but in different gun stations. The ship was among the first to respond, Young said, and they were credited with downing one plane.

Young, who is in memory care at VMRC, remembers serving in the U.S. Navy and surviving Pearl Harbor, but does not remember all the details. He logged diary entries during his time in the service, and wrote a reflection from the attack 50 years later.

In his diary, Young wrote that on December 7, he and his fellow castmates “would ram by hand and fire as quickly as possible.”

“There were five of us destroyers tied up to Dobbin so we made a large target,” he wrote. “One squadron of planes tried to bomb us but we drove them away with anti-aircraft fire. However, one bomb hit 50 ft. off our fantail. One of our machine gunners brought down a plane.”

There was an hour of nearly steady firing, Young recalled. The noise was loud, almost loud enough to burst eardrums, and some men on the ship were killed from strafing.

“My memories of the attack center on the fear I felt as bombs threatened our lives, and the overwhelming sadness I experienced in seeing our great Navy virtually destroyed,” Young wrote in a journal. “I have vivid memories of the tremendous battleship, the U.S.S. Arizona, split open like a tin can with smoke and flames billowing out. I can still see a lone seaman on one of the top decks of the U.S.S. West Virginia, battling a consuming blaze with a small hose. I see the Oklahoma capsized, the California resting on the bottom, and the Nevada beached at the mouth of the harbor.”

Fifty years later, Young wrote that despite his experience, he hasn’t felt any animosity toward the Japanese.

“Whether this springs from a deeply held belief that we ought to forgive, or from the knowledge that all of us have transgressed, or simply from the mere passing of time, I do not know,” Young wrote. “But I do know that whereas during the war I hated the Japanese with a fiery hatred, I now look upon them as brothers and sisters.”

For some survivors, that pain has never abated, Young wrote.

“But rather than fixing blame, or hurling accusations, or second-guessing those who made the best decisions they could during desperate times, or compensating those who were wronged, would it not have been better to simply bury the hatchet, and work for peace?” Young wrote.

In 1944, Young went to officer training under the V-12 program at the University of Richmond, and later to the ROTC program at Duke University. He was given an honorable discharge in 1945, due to having contracted rheumatic fever.

He attended Louisiana State University on the G.I. Bill, earning both a bachelor’s and master’s degree in math — a subject he said he “always seemed to do well in.”

“You don’t get off a horse that’s running,” he said with a laugh.

While working on a teaching fellowship at LSU, he met his wife, Madge Mixon. Young recalled a time where he got coffee for all the other women in his Spanish class, except her, as a joke to make her jealous.

The couple moved to Houston, where Young began to work as an actuary. In 1957, he enrolled in the Austin Presbyterian Theological Seminary and worked in ministry at small churches in the deep South. While in Mississippi in 1963, Young was active in the Civil Rights Movement, working for the inclusion of all people in worship services.

Madge was very religious, Young said, and her faith influenced him.

“I recognize she was the proper person for me,” Young said.

In 1974, Young earned a Doctor of Ministry from Louisville Presbyterian Theological Seminary, and became the National Chaplain for the Pearl Harbor Survivors’ Association 10 years later.

Richard and Madge retired in the Massanetta Springs area of Rockingham County.

Young’s family plans to have a celebration for him Monday. He has four children, six grandchildren and 12 great-grandchildren.

Great story by the DNR. Many World War II veterans are no longer with us and as time passes on the ones that I here will soon be gone and along with it their individual stories of self-sacrifice and service in a time when America’s very survival was in peril.