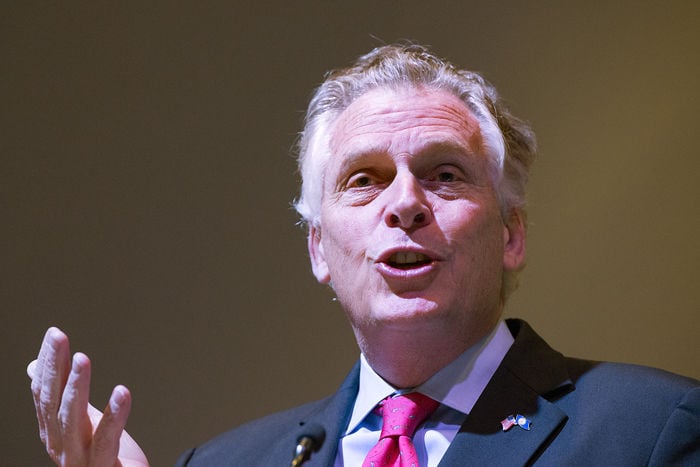 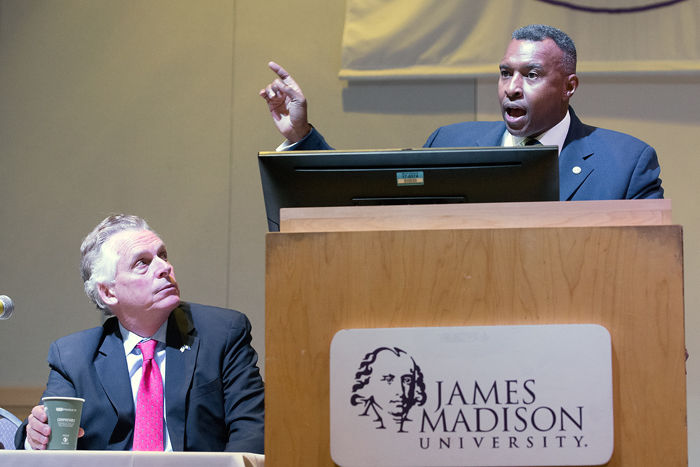 Alan Grant, dean of the Virginia Tech College of Agriculture and Life Sciences, speaks during a panel on workforce and education Tuesday at the Governor’s Smart Farm Summit at James Madison University. Seated at right are Matthew Brantley of John Deere Precision Technology and John Downey, president of Blue Ridge Community College.

Alan Grant, dean of the Virginia Tech College of Agriculture and Life Sciences, speaks during a panel on workforce and education Tuesday at the Governor’s Smart Farm Summit at James Madison University. Seated at right are Matthew Brantley of John Deere Precision Technology and John Downey, president of Blue Ridge Community College.

HARRISONBURG — Gov. Terry McAuliffe said Tuesday at the Governor’s Smart Farm Summit that Virginia is the No. 1 state in America for cybersecurity, data centers and unmanned aerial systems.

And he said he’d like to see another superlative join that list, one from a profession that’s been around for ages.

“We’ve got to make sure we’re doing the same thing for our farmers,” McAuliffe said at the James Madison University Festival Conference and Student Center. “And we’ve got to make sure the young folks, when they’re looking at going into these new, innovative technologies in cyber and data, that farming is right there.”

The governor’s remarks kicked off a daylong summit billed as the first of its kind in the nation. About 90 state and local agriculture, technology and economic development officials and some local FFA members attended the event.

The focus was how technology is changing agriculture and the opportunities those changes present. McAuliffe said production, processing, research and development, marketing and trade are areas ripe for innovation that will alter the way the industry does business.

“I want Virginia,” he said, “to be considered the best state in America for coupling innovation, technology and agriculture.”

Luncheon keynote speaker Dr. Terry Sharrer, a medical expert and principal with iMED R&D, believes Virginia should create a Center for Innovative Agriculture. Sharrer said the center could be a biorepository for DNA samples of each living species that’s adapted to Virginia and a place where the latest agricultural technology could be exhibited.

During a panel discussion, three industry professionals described how the world of agriculture is changing.

Tim Woodward of Tellus Agronomics, an Orange County company that helps farmers interpret data collected by drones, satellites, soil and plant sensors and other precision-agriculture equipment, said the ability to gather that data creates opportunities for farmers to manage their operation better and be more profitable.

Karen Jackson, Virginia’s secretary of technology, advised local farmers to reach out to the Shenandoah Valley Technology Council, explaining that they might be able to help them with tech matters. Jackson also mentioned that NASA has satellite data available to farmers at no cost.

Though some machinery carries big price tags, Woodward said, yield, parts, planting and sprayer monitors are among the tools that can be obtained with a relatively small investment.

“That opens the door,” he said, “to large-scale on-farm research. Farmers can try new practices and new technology before investing in technology for the whole farm.”

The industry also has access to web platforms to help farmers and better record-keeping measures to help with farm management, Woodward added.

Bobby Vick with PrecisionHawk, a Raleigh, N.C., company that specializes in drone research and data interpretation, said some farmers haven’t been early adapters of new technology. Tablets and smartphones, however, are becoming vital pieces of equipment for most.

“They have more information in the palm of their hand, literally,” Vick said, “than they would have had from decades of farming years ago.”

“This is big data hits the farm,” Kolvoord said, “and farmers now are going to have to be able to find a way to take advantage of these kinds of things.”

Medical technology is going to become important to agriculture in the future because diseases span multiple species and commonalities will allow innovations to cross industries, according to Sharrer.

Sharrer said imaging, molecular diagnosis and artificial intelligence, bioprinting and gene medicine are among the technologies that can benefit agriculture. He also predicted that one day the most valuable commodity will be a plant that pharmaceutical manufacturers use to make medicine.

“Technology is going to be an important part of this, and I think for the young people in the crowd, it’s a huge opportunity,” he said. “You’re going to be able to make your marks by finding ways to creatively integrate that technology and to come up with new technologies.

“Stuff we haven’t even thought of is going to allow you all to be successful in your careers, and to allow Virginia to be at the forefront of the smart-farm movement.”