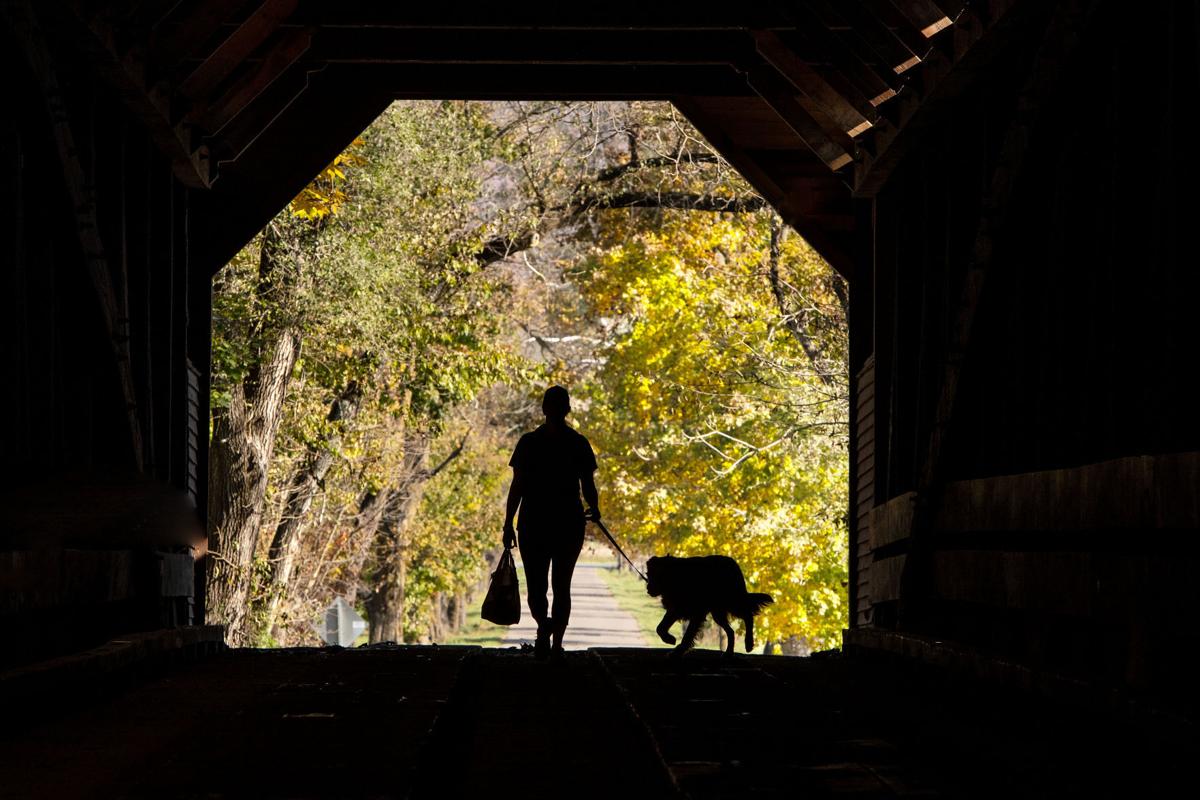 Jamie Day and her Golden Retriever, Imnaha, walk inside the Meems Bottom Covered Bridge on Wissler Road in Mount Jackson. 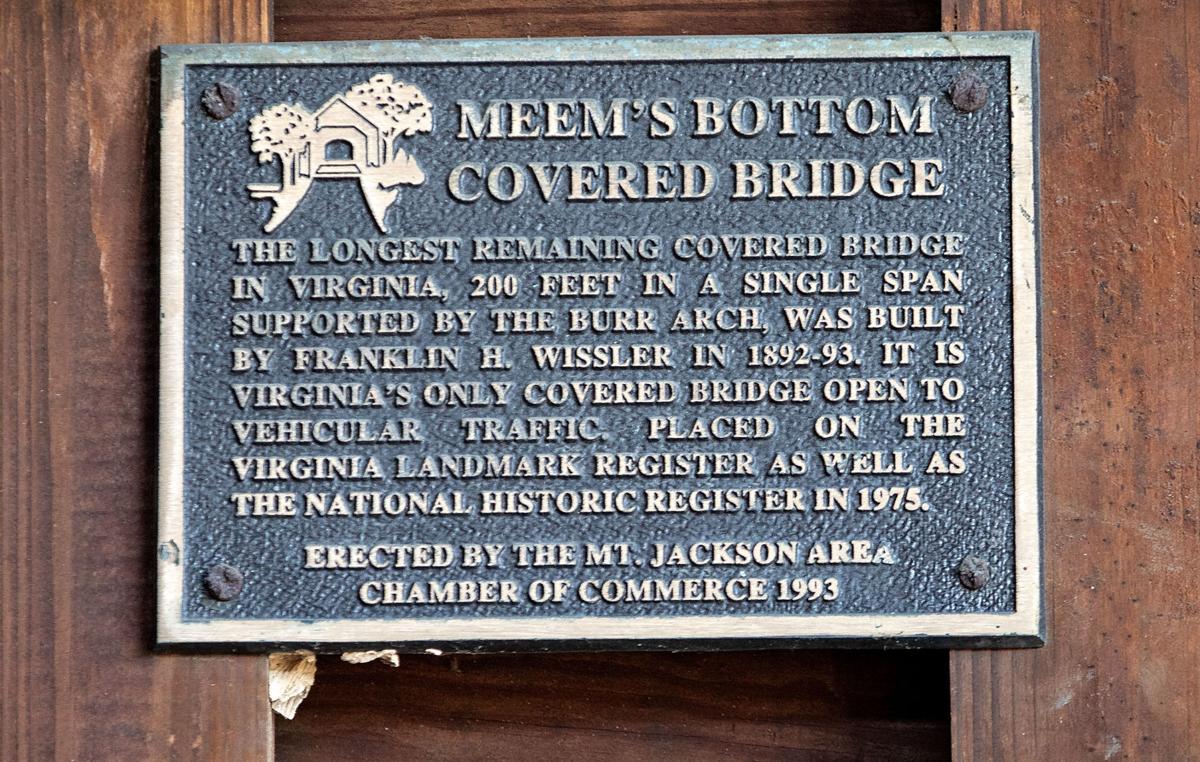 A plaque inside the Meem's Bottom Covered Bridge notes the structure's historic significance. 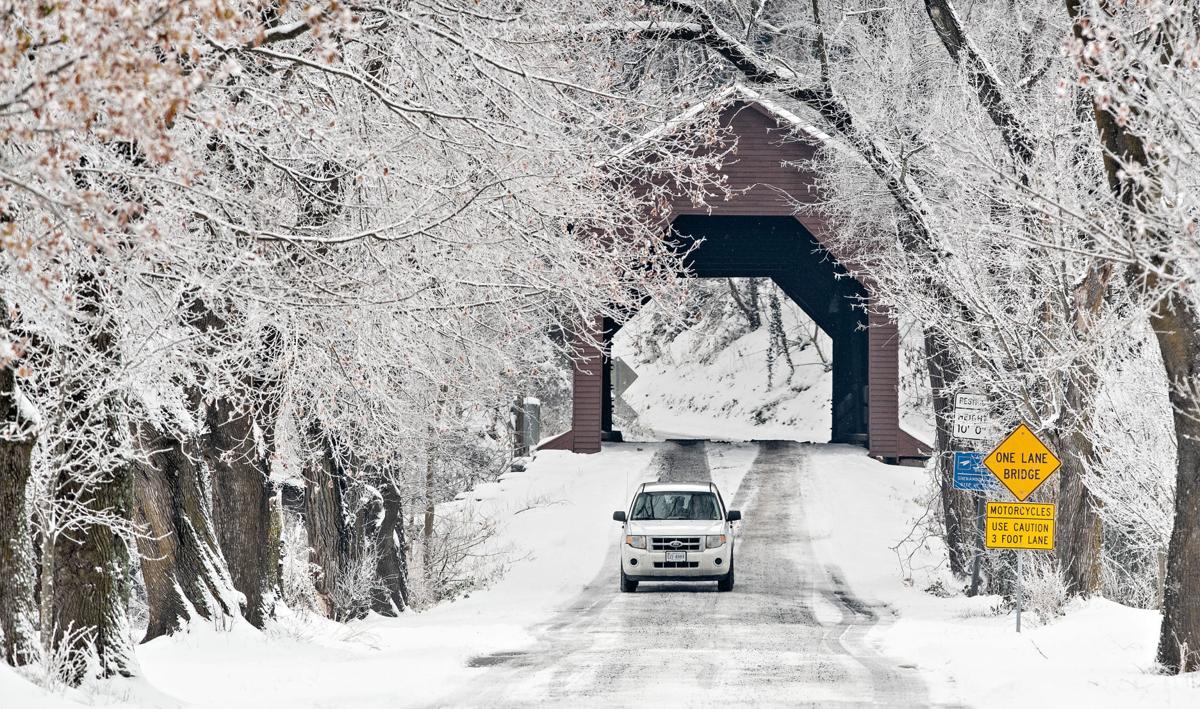 An SUV drives along a snow-covered section of Wissler Road at the Meems Bottom Covered Bridge in December.

Jamie Day and her Golden Retriever, Imnaha, walk inside the Meems Bottom Covered Bridge on Wissler Road in Mount Jackson.

A plaque inside the Meem's Bottom Covered Bridge notes the structure's historic significance.

An SUV drives along a snow-covered section of Wissler Road at the Meems Bottom Covered Bridge in December.

The Meems Bottom Covered Bridge takes a beating from tractor-trailers several times a year even though warning signs and metal bars have been put up to help protect the historic structure.

The bridge on Wissler Road near Mount Jackson in Shenandoah County remains closed until further notice as the Virginia Department of Transportation assesses the latest damage and considers ways to save the historic crossing. But VDOT is running out of options to prevent more damage and regular repairs cost money.

VDOT closed the bridge earlier this month after a vehicle hit part of the structure. The department received the go-ahead to close the crossing for 180 days. Ed Carter, VDOT’s Edinburg residency director, said VDOT could reopen the bridge sooner.

One option to protect the bridge is to close it to vehicles, leaving it open only to pedestrians, Carter said by phone Monday. He added that permanent closure remains a last resort.

VDOT staff, Mount Jackson and Shenandoah County officials and representatives of emergency services have discussed the possibility of leaving the crossing open to pedestrians, Carter said.

“No decisions have been made,” Carter said. “These are just options we’re looking at and there’s a process we would have to go through if that decision was made to do that, with public hearings and all that.”

If it becomes a pedestrian crossing, Cater said VDOT would need to accommodate farmers who work both sides of the Shenandoah River and haul equipment over the bridge.

Traffic cameras might help catch vehicles that cause damage but would not prevent strikes, Carter noted.

Many truck drivers rely on geographical information systems when traveling to and from the Mount Jackson industrial park, Carter said. The systems typically direct the driver to the shortest route, which is through the Meems Bottom Bridge, Carter said. Many drivers use older GIS units that have not been updated and do not provide an alternate route, he said.

“And you’re only talking about a four-mile detour,” Carter said. “I mean, it’s only saving them four miles (to take the bridge).”

“We spent a great deal of money putting up bars and chains to warn the truckers, you know, saying they’re too high or wide and, according to the officer that followed this trucker through (the bridge), he hit the chains and never even stopped, just kept on going,” Carter said.

Mount Jackson Police Chief Jeff Sterner did not return a call for comment about his agency’s involvement.

This is not the first time the bridge has been closed for an extended period of time.

VDOT closed the bridge in early April 2017 to repair damage caused by two vehicle strikes. The bridge remained closed until crews completed the repairs and installed clearance bars suspended by chains from the roof of the structure. VDOT reopened the bridge in the summer of 2018.

A fire in 1976 damaged the bridge, but VDOT rebuilt the structure. VDOT has since installed a fire alarm in the bridge.

Great bridge, save it, keep vehicles off it.