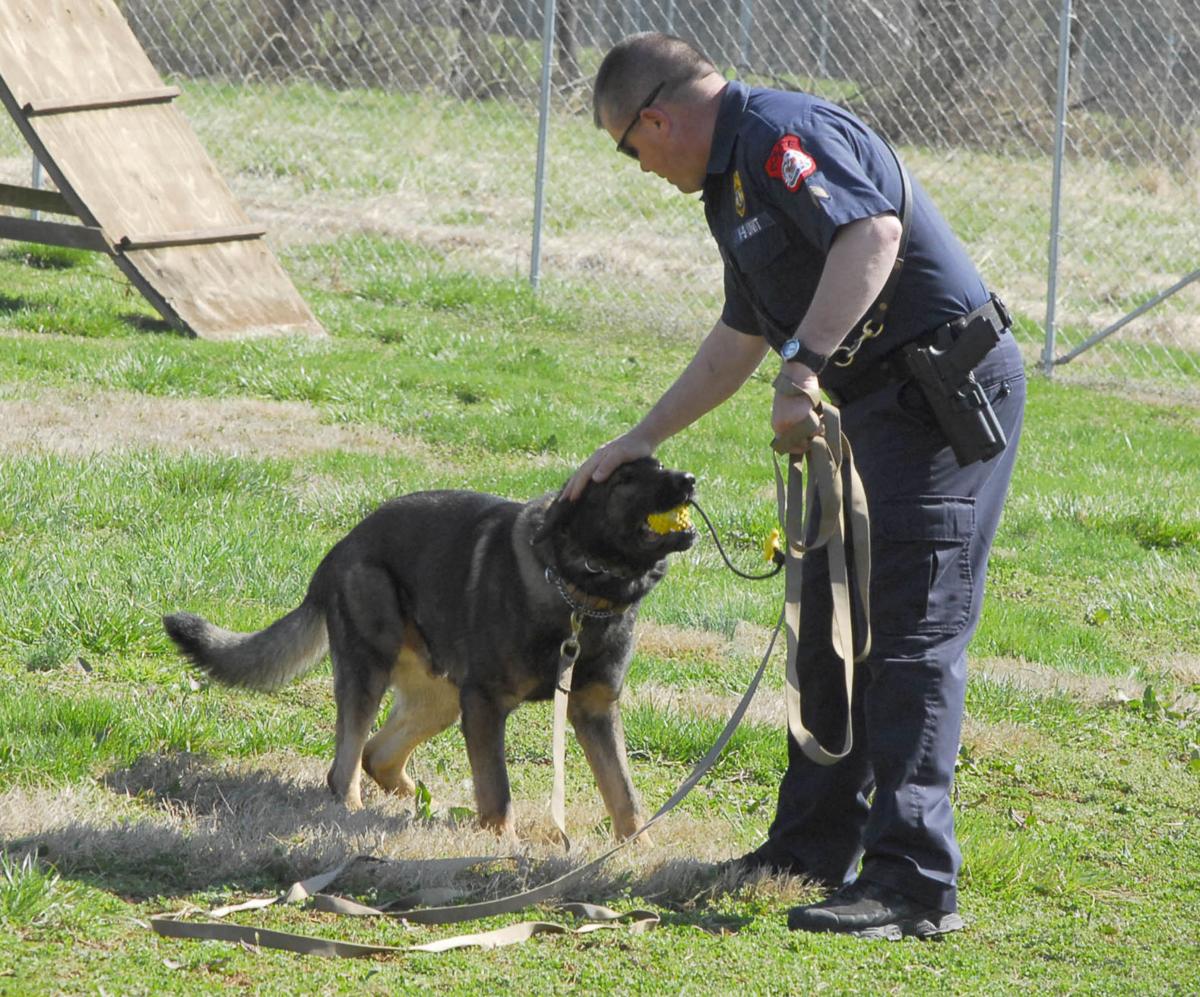 Harrisonburg Police Cpt. Carl Cline gives K-9 Shadow his reward for a job well done — a ball with a string attached — during some training in this undated photo. Shadow, who retired in August 2020, died on Sept. 12. 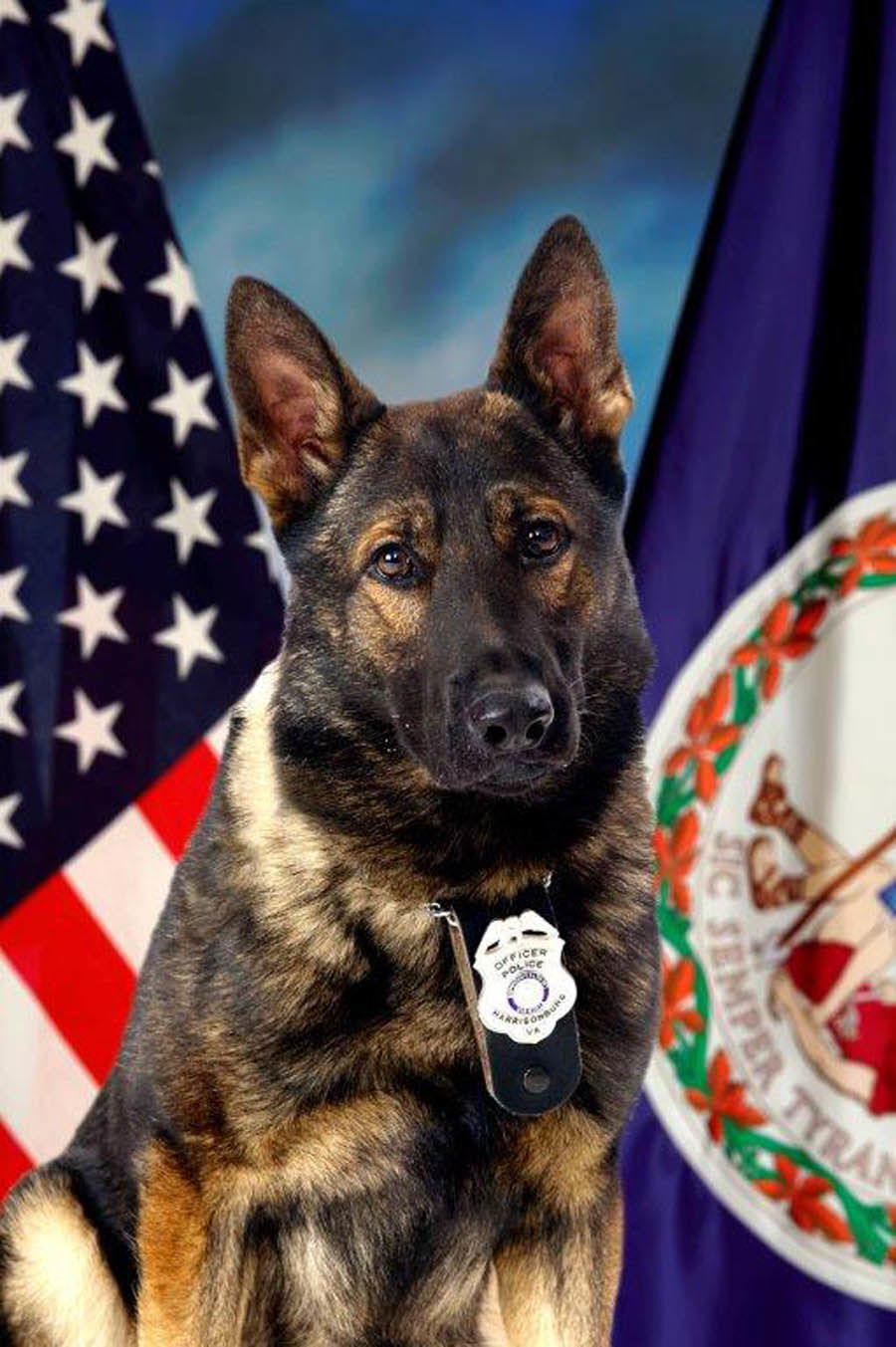 “I just knew, through the cues he would give me, that he would do anything [to protect me],” says Harrisonburg Police Cpt.Carl Cline of his K-9 partner Shadow. 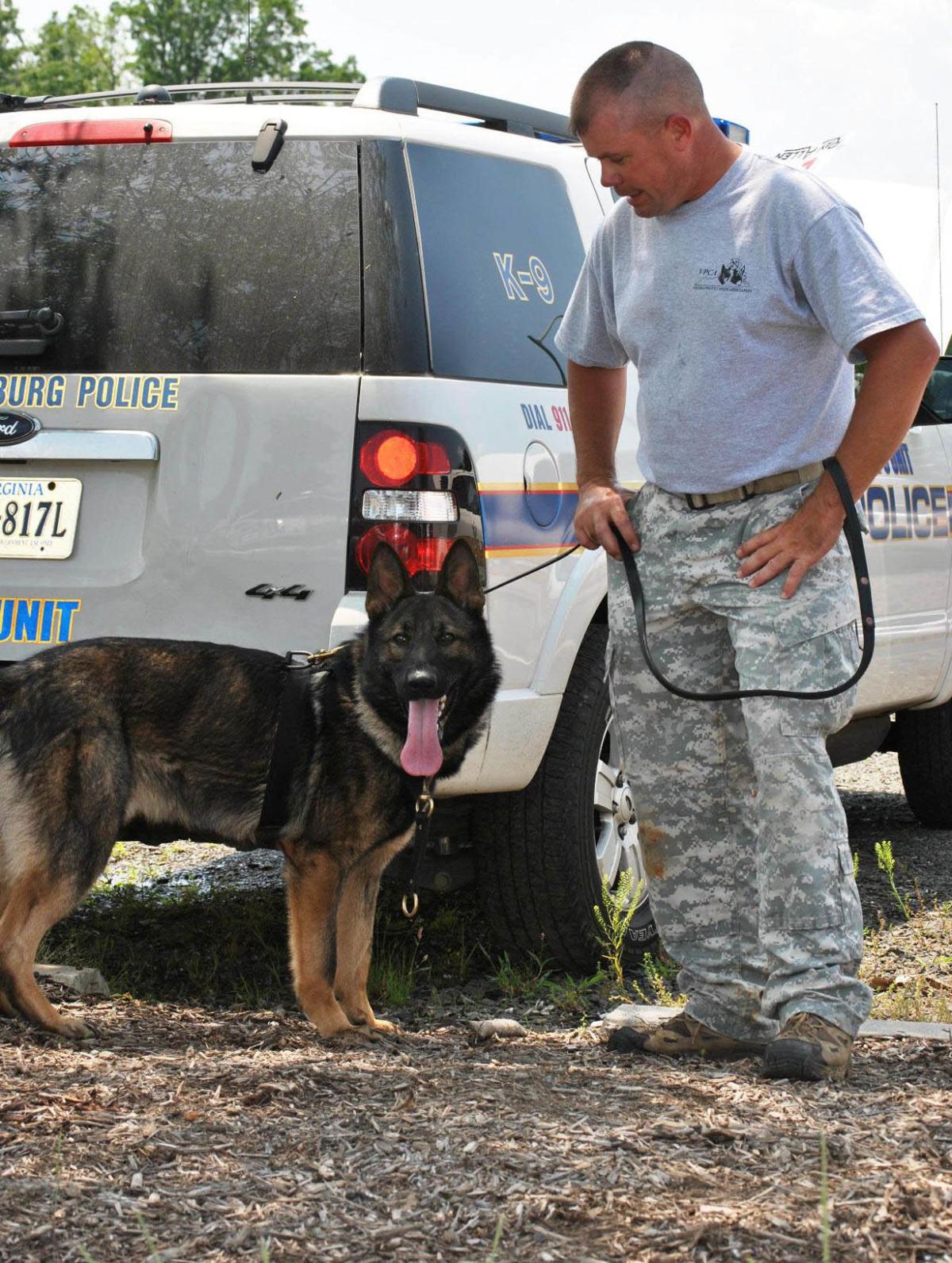 “It’s a bond that no one can really explain unless you have been in that position,” says Harrisonburg Police Cpt. Carl Cline, left, of being a K-9 handler. His retired partner, Shadow, died Sept. 12.

Harrisonburg Police Cpt. Carl Cline gives K-9 Shadow his reward for a job well done — a ball with a string attached — during some training in this undated photo. Shadow, who retired in August 2020, died on Sept. 12.

“I just knew, through the cues he would give me, that he would do anything [to protect me],” says Harrisonburg Police Cpt.Carl Cline of his K-9 partner Shadow.

“It’s a bond that no one can really explain unless you have been in that position,” says Harrisonburg Police Cpt. Carl Cline, left, of being a K-9 handler. His retired partner, Shadow, died Sept. 12.

Toward the end, Shadow — the once athletic K-9 with the Harrisonburg Police Department — could no longer jump into the camper for trips.

Instead, his longtime handler and partner, Harrisonburg Police veteran Cpt. Carl Cline, had to lift him in.

In the end, on the floor of a veterinary office, Cline got on his knees, held the German shepherd’s head in his arms and said goodbye.

“I expressed my love for him …”

Cline, sitting behind his office desk, doesn’t make eye contact as he thinks about Sept. 12 — the day he said his last goodbyes to his retired partner. Instead, he looks out the window and lets out a sigh.

“It’s tough,” he said. “It’s a bond that no one can really explain unless you have been in that position.”

For eight years, Shadow was a constant. The partner in the back of the police vehicle. The friend at home. The four-legged badge-wearer who Cline was sure would put his own life in danger before the 20-year HPD vet could be touched.

A bond that was unbreakable.

“I just knew, through the cues he would give me, that he would do anything [to protect me],” Cline said.

The feeling, without hesitation in Cline’s voice, was mutual.

Every day for eight years, the duo was one. Eight- to 12-hour shifts, then at home where Cline and Shadow continued their bond. In August 2020, Shadow retired. That month he became a full-time family pet, where the bond grew and Shadow, once not a fan of Cline’s wife and two children, warmed up to the family as he settled into retired life.

Purchased from Shallow Creek Kennels in Sharpsville, Pa., when he was 15 months old, Shadow came to the United States from the Netherlands, and when Cline was assigned the duty, the pair had a two-week bonding period in 2012 before heading to the classroom for basic K-9 training.

There, Shadow became an explosive-detection dog, honing his nose to pick up on gun powder and other potentially dangerous devices.

“As soon as we finished,” Cline said, “we hit the streets.”

There, the bond dug itself deeper.

“It is an amazing relationship,” said HPD Chief Kelley Warner. “The K-9 is only as good as the handler and the dedication the handler has to have with the K-9 is tremendous.”

Though, Cline admitted, transitioning Shadow to family life wasn’t easy. At home, Cline was the alpha of the pack-mentality dogs have. However, Shadow considered himself the “bravo,” Cline said.

“When he was younger he tried to bite my wife,” Cline said.

He bought a “family shepherd” to help Shadow reassess his standing in the family. It worked.

“As he got older, he started to reevaluate that pack status,” he said. Eventually, his son and even Cline’s wife could take Shadow on a stroll.

Somewhere along the way, Shadow was diagnosed with degenerative myelopathy, a progressive disease affecting the spinal cord in older dogs that causes paralysis. Over the course of six months, Cline’s retired partner began to lose the use of his back legs. It started as a limp.

On Wednesday, in his office in the Harrisonburg Public Safety Building, Cline reeled off all the times Shadow was a good boy. Sniffing out guns and ammo in a school parking lot. Just a parent there to pick up kids with firearms left in the trunk of the car.

Plus the many tracking assignments they were called to do. Finding people on the run, like that one cold, dark night searching for a suspect with a briar patch to Cline’s left and Shadow leading the way, stopping and making a quick turn for the brush.

“I hit it with my light and could see the guy right there,” Cline said. “Laying on his stomach, hands tucked underneath him.”

No firearms found, but a pair of binoculars with meth stuffed inside the lens. Cline would have never seen the suspect if not for Shadow, he said.

His reward for doing his duty was a ball attached to a string and a simple fire-hose tug.

“His paycheck,” Cline said. “That and my praise.”

The praise will continue for Shadow. While he won’t get a place along the wall inside the Public Safety Building — a spot dedicated to those K-9s who died while still on active duty — Warner said she’s bouncing around the idea of some sort of memorial to all the K-9s who have died.

Outside the Abington Township Police Department in Montgomery County, Pa., where Warner was deputy chief before coming to Harrisonburg, she said there’s a little grassy area near the parking lot with a tombstone that lists all the names of the K-9s who died.

“We’re going to do something [in Harrisonburg],” Warner said.

In his office, Cline has plenty of memories, including a photo of Shadow behind him. His furry friend who was more than just a dog.

“He was my partner,” Cline said.