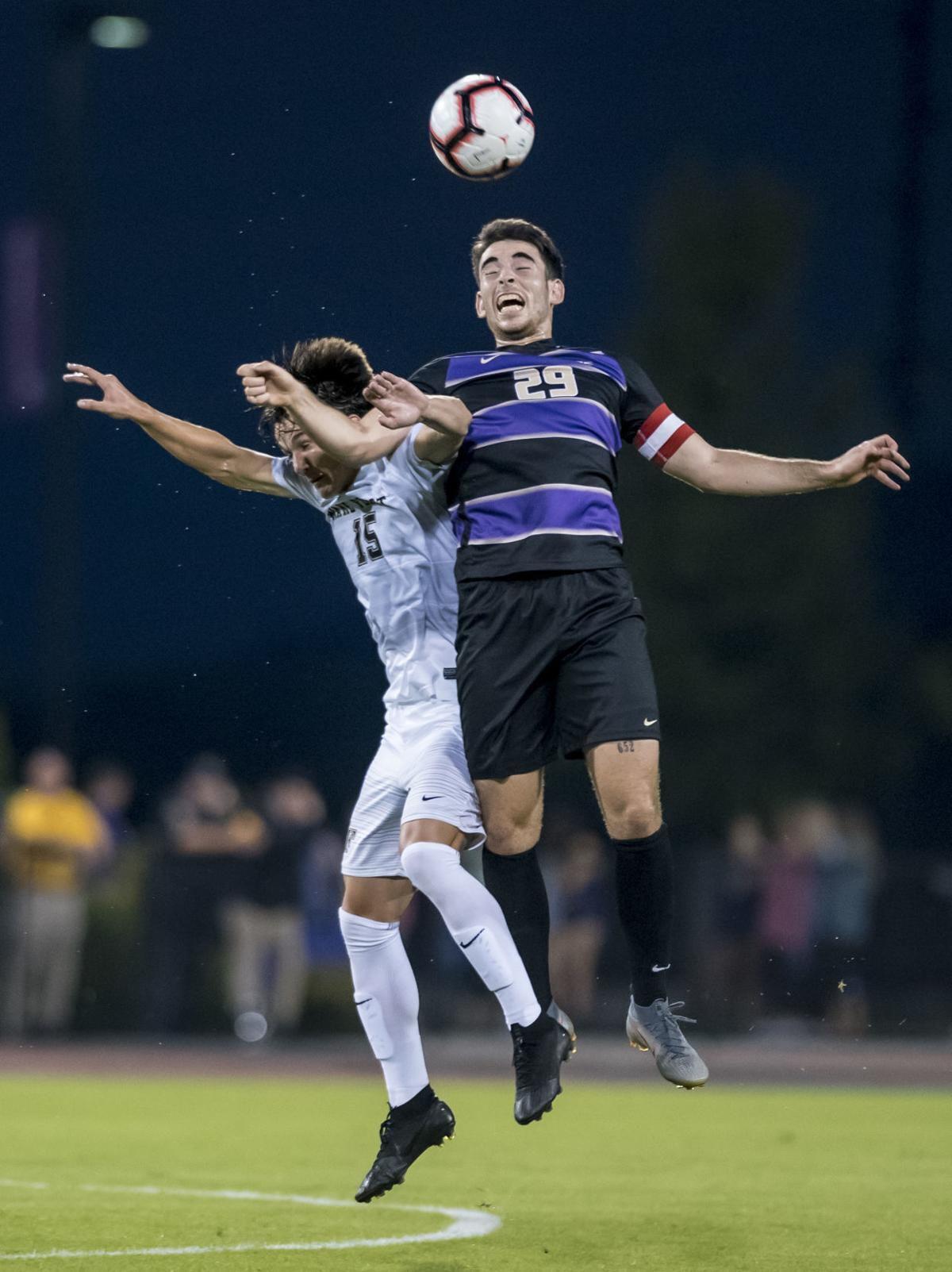 James Madison’s Fernando Casero fights to head the ball during the Dukes’ win over Wake Forest last season at Sentara Park in Harrisonburg. 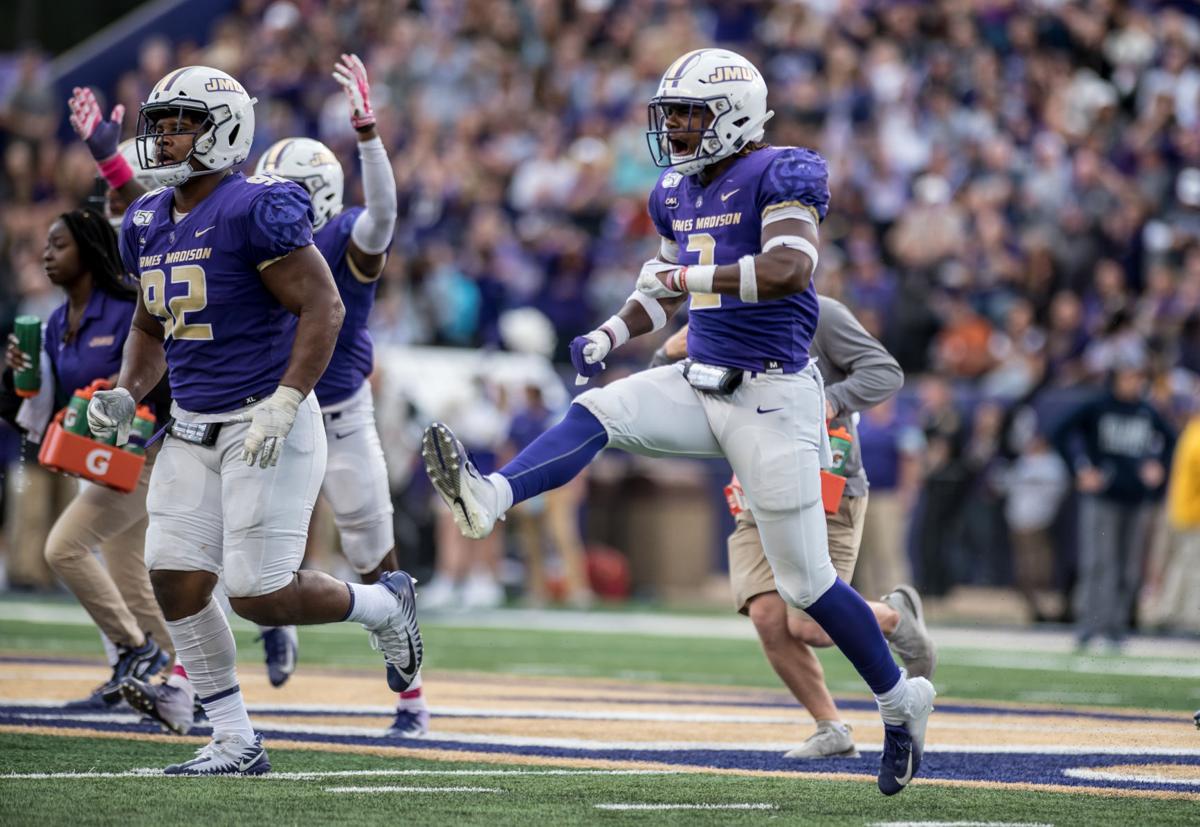 James Madison linebacker Dimitri Holloway (2) celebrates with teammates after a recovered Villanova fumble during the Dukes’ win over the Wildcats last October at Bridgeforth Stadium. 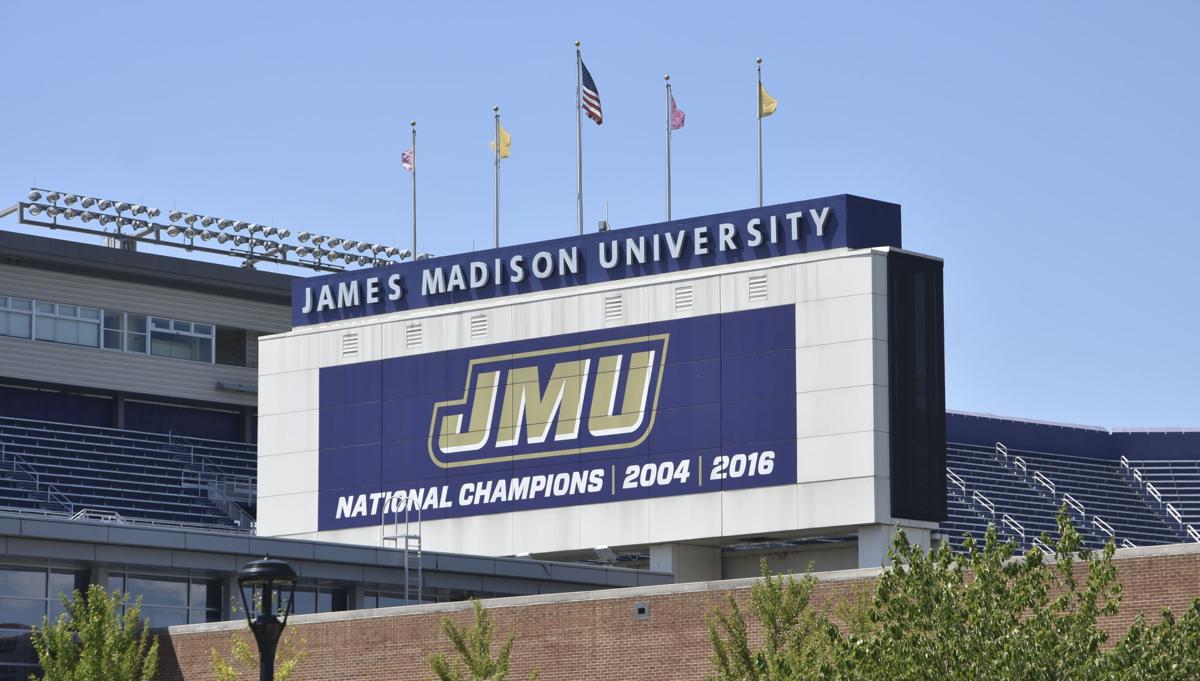 The back of the Bridgeforth Stadium scoreboard touts James Madison football’s two national championships. JMU announced Monday that all fall sports have been suspended due to the COVID-19 pandemic after deciding last week to push football to spring. 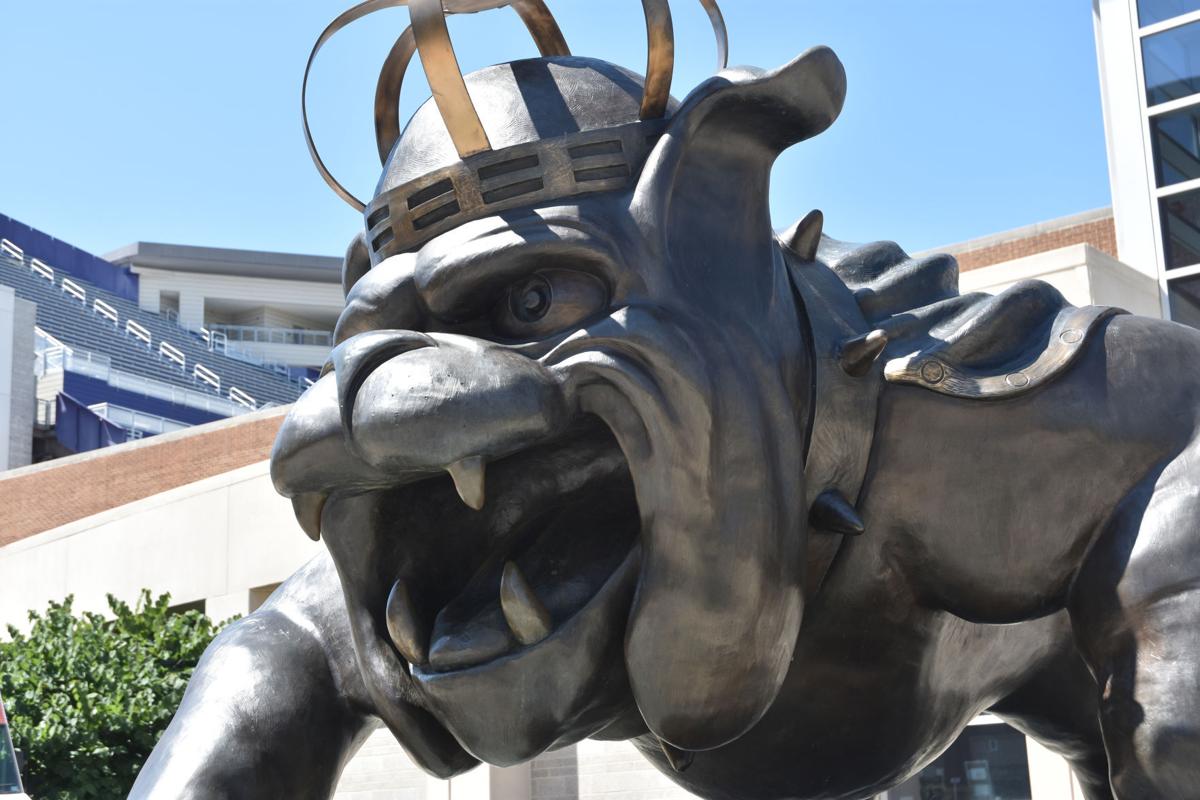 The Duke Dog statue sits outside Bridgeforth Stadium on the campus of James Madison University. JMU announced Monday that all fall sports have been suspended due to the COVID-19 pandemic.

James Madison’s Fernando Casero fights to head the ball during the Dukes’ win over Wake Forest last season at Sentara Park in Harrisonburg.

James Madison linebacker Dimitri Holloway (2) celebrates with teammates after a recovered Villanova fumble during the Dukes’ win over the Wildcats last October at Bridgeforth Stadium.

The back of the Bridgeforth Stadium scoreboard touts James Madison football’s two national championships. JMU announced Monday that all fall sports have been suspended due to the COVID-19 pandemic after deciding last week to push football to spring.

The Duke Dog statue sits outside Bridgeforth Stadium on the campus of James Madison University. JMU announced Monday that all fall sports have been suspended due to the COVID-19 pandemic.

“[JMU assistant athletic director] Kevin [Warner] and I are probably going to be handing out water at the coolers,” JMU athletic director Jeff Bourne said with a laugh. “Everybody is going to do a little different job in the spring than what we’ve been doing, right?”

Whatever extra responsibility Bourne takes on come March or April will undoubtedly be better than what he’s dealt with for the last five months since the coronavirus halted college athletics this past spring and hasn’t allowed for sports to return as the country is accustomed to.

No JMU sports have been played since mid-March and none will be played this fall as the school announced on Monday it was suspending all of its fall sports competition.

“Being an athletics person, you carry the feelings of your kids and your coaches with you on your shoulders,” Bourne said. “And you think about the work they’ve done over the last number of months to keep themselves in shape, preparatory work they’ve done to be able to play in the fall season.

“And it’s not just them, but our staff. Our staff has done a phenomenal job of educating, bringing students back to campus, working with ‘em to test them and make sure they’re in great position to stay healthy and that includes our coaches. And then to find out you’re not playing right now, that’s a pretty tough blow and that hurts.”

Bourne said it’s why JMU, the CAA and many schools and conferences around the country are planning for their fall sports teams to play competitively in the spring as long as the coronavirus allows for it.

The Dukes’ football team has appeared in three of the last four FCS national championship games. JMU men’s soccer has reached the NCAA tournament in each of the last two seasons and the JMU volleyball program has ripped off five straight campaigns with 20 or more wins.

“The silver lining is that we’ve worked very diligently to make sure they have an optimal experience in the spring,” Bourne said. “And we’re doing everything we can to make sure every sport team can play in the spring. That’s going to be challenging work, just given the number of sports we have and given that it’s an uphill battle, but I really do feel good about making it happen and I think we can develop a schedule and a season and a postseason that’s meaningful to our student athletes.”

JMU has had its fall athletes on campus since July 6 when football players became the first to return in preparation for a potential fall season.

The athletic department has administered 352 coronavirus tests to coaches, staff members and athletes – across football, men’s basketball, women’s basketball, men’s soccer, women’s soccer and volleyball – and only two tests returned positive. Both were asymptomatic cases, and by the time JMU made the decision to suspend fall sports on Monday there were no active COVID-19 cases in the department.

“It was a matter of NCAA notice, financial resources and effort for us with other members of our league moving to delay sport,” Bourne said, “which put us in a position to make the decision we released [on Monday].

“That being said, I’m encouraged about the spring and I know we’re all going to work diligently to try to move the NCAA along to make some decisions that would put us in a better spot in the spring to be able to play.”

Fall athletes who are already on campus can stay and continue voluntary workouts with strength and conditioning coaches. Basketball players remain on campus, too, and Bourne said he’s hoping the basketball season can start on time.

If all goes according to plan and sports at JMU can return then, it’ll set up a very busy spring for Bourne and company.

“We want the quality of experience to be good,” Bourne said, “and we want everybody to be safe, but for us I’d be less than honest if I told you it wasn’t going to be incredibly challenging. But I think where there’s a will, there’s a way and you rise to the level of your expectation to make things happen.”