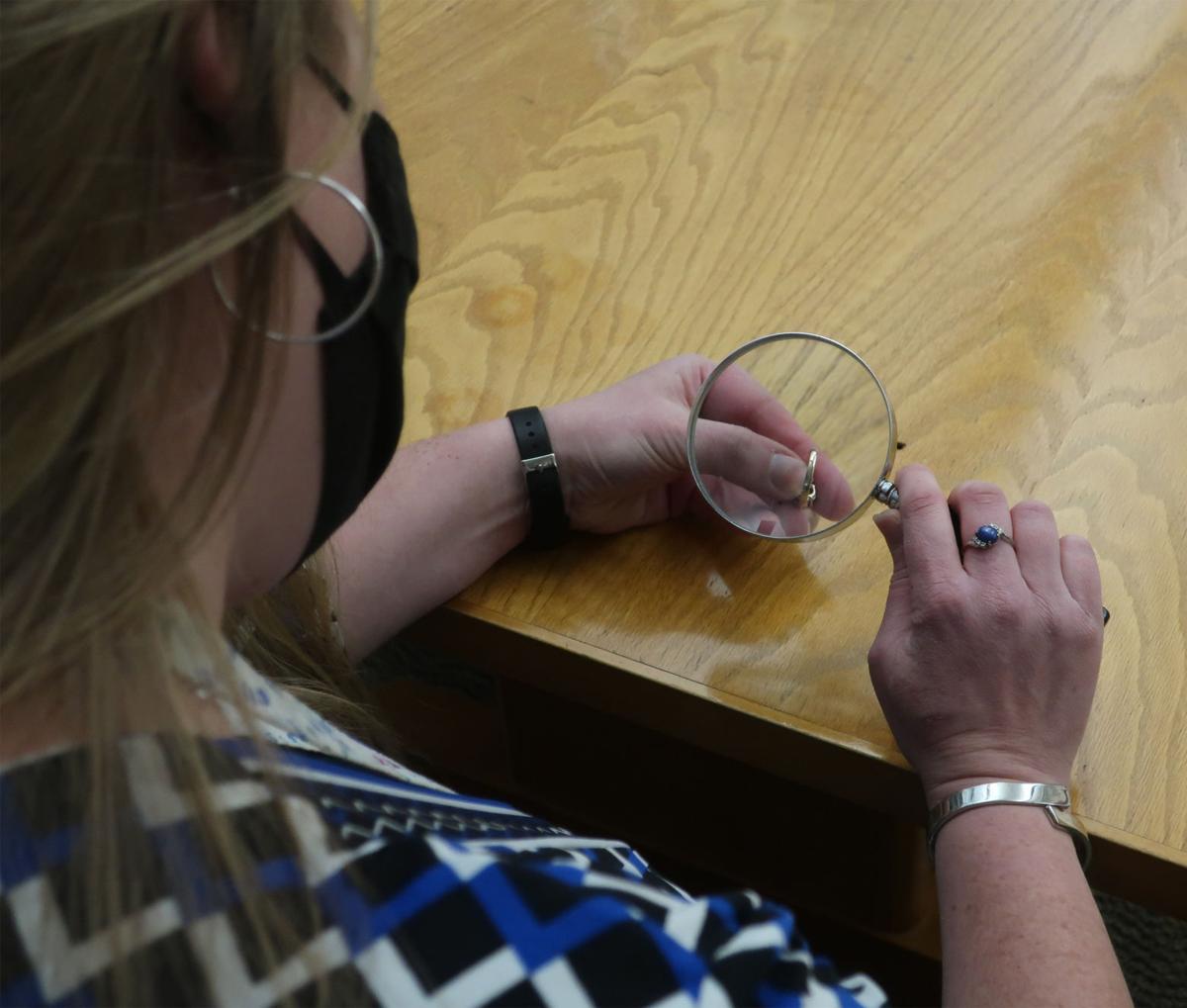 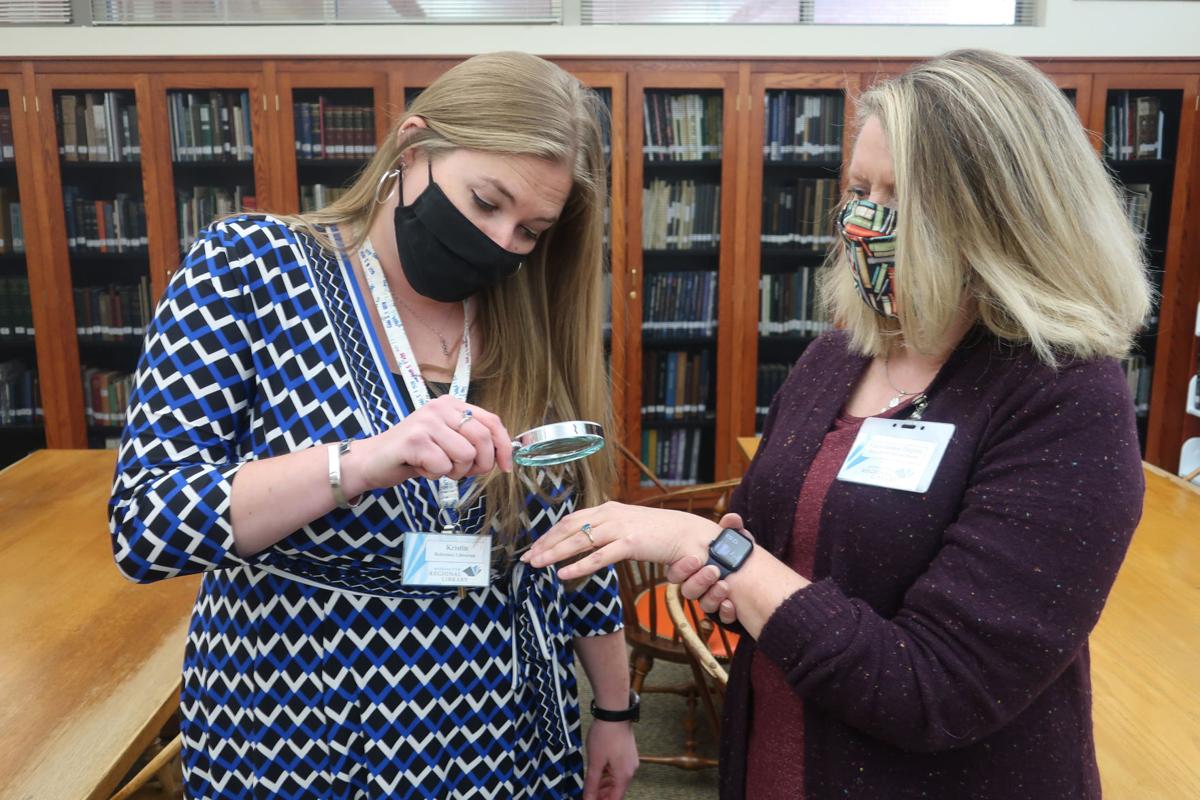 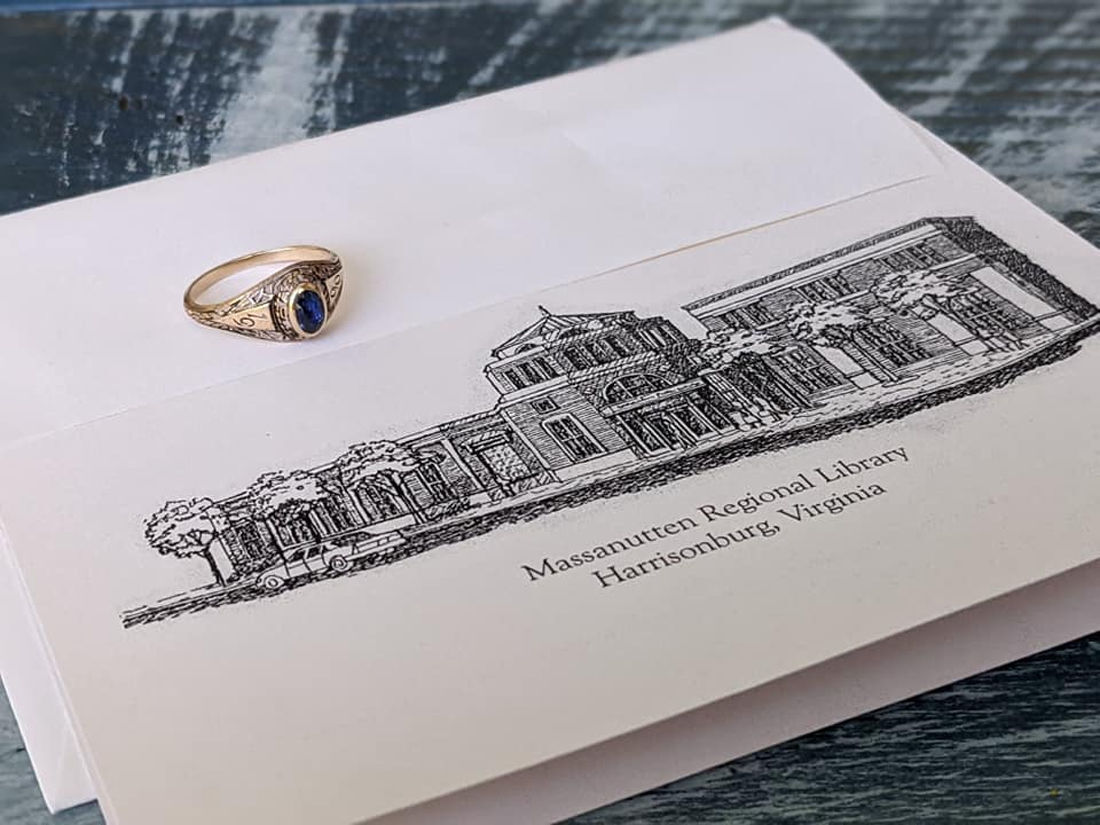 Elizabeth “Betsy” Roberson Norman’s class ring was stolen over 20 years ago and found inside a box of donated books at the Massanutten Regional Library in August.

Elizabeth “Betsy” Roberson Norman’s class ring was stolen over 20 years ago and found inside a box of donated books at the Massanutten Regional Library in August.

The circumstances surrounding a ring stolen from Elizabeth “Betsy” Roberson Norman’s Springfield home over 20 years ago are unknown.

What is known, however, is that it turned up in a box of books donated to the Massanutten Regional Library on Aug. 30 and reference librarian Kristin Noell used her sleuthing skills to trace the ring back to its owner.

If only that ring could talk.

“It would get somebody in trouble,” Noell said.

It was on that fateful August morning, Noell said, that Lois Jones, then-director of MRL and ready to retire, came to Noell with one final mission. Jones handed her a pink satin knick-knack box with white, stitched cherry blossom accents. Inside was the class ring with an oval-shaped blue stone set in a gold-colored band.

“I wasn’t optimistic. I had information to start with. If it wasn’t a class ring I might not have been able to [find the owner]. It gave me some pieces to start putting together,” Noell said. “If I hadn’t found the owner it might have [gone to Gift & Thrift], but I had to try first.”

The task fell into the hands of the right person. Noell, called the “resident detective” at the library by Jones, is passionate about using her library skills to help people. This wasn’t the first time a stray object came to the library buried in a box of donated books, which have been backed up due to COVID-19 safety protocols.

If cash is found, Mary Golden Hughes, MRL’s director of advancement, said the library does its best to return it to the owner. Most of those people, however, live nearby and use the library’s services.

But the ring was a different story.

Barely legible under all the grime, Noell said the ring was engraved with a stylized “Oakton HS,” around the blue stone. On the inside of the band, Noell said it took a magnifying glass to reveal the name “Elizabeth Roberson” engraved. On either side of the setting, the numbers “19” and “90” were engraved.

The librarians didn’t know who had donated the box of books that had the ring in it, so Noell said one of the first things she did was check a database of library patrons — people who have signed up for library cards — to see if the ring belonged to any of them.

But there was nobody with the last name Roberson in the library’s system.

“I had no idea how long that box was there, who it came from, anything,” Noell said.

Using the information she got from the ring, Noell searched through Ancestry Library Edition and NewsBank, two databases that are available to all patrons at each of the library’s branches.

“This is going beyond a simple Googling that you or I would do when we’re researching. That is not research. Research is trained professionals. It would take me 10 times as long as it takes [Noell,]” Golden Hughes said. “It’s so cool the way [her] brain works.”

“I think people don’t even understand that we have professionals in our midst that can help them improve their lives by giving them the information that they need. They know how to find information, how to go deep,” Golden Hughes said. “They’re a lot like detectives.”

Golden Hughes said it also takes a person who’s compassionate and cares about the community.

“You wouldn’t be in a profession like this if you didn’t want to help people. It is a caring profession,” she said.

“I was able to look and I found her like, sophomore class picture,” Noell said.

Armed with a bit more info, Noell returned to Google and came upon a real estate website for somebody named Elizabeth Roberson Norman with an email containing the nickname “Betsy.” Sure enough, a Facebook search for Betsy Roberson Norman yielded a match.

“There she was. And I sent a message. I said, ‘This is so random, this is so out of the blue but I found this ring from Oakton High School in 1990, is there any chance that it’s yours?’ She was like, ‘oh my gosh, yes, it is mine,’” Noell said.

“I was excited enough that I found the owner of the ring, but the fact that I was reuniting her with stolen property was even better. I was bouncing off the walls. I was like, ‘Lois, guess what?’” Noell said.

Roberson Norman, who had indeed graduated from Oakton High School in Herndon in 1990, said the ring had been stolen along with an entire jewelry box from her home. After the box was stolen, she said she forgot about the ring.

“I figured I would never see anything in that box again,” Roberson Norman said in a Facebook post. “It had kind of been written off once everything was stolen. I hadn’t thought about it in probably 20 years. It was a totally unexpected blessing.”

In the 20-plus years since the ring was stolen, Roberson Norman said she’s had four children and lived in many different locales, including Hawaii, investing in real estate with her husband, Greg Norman. Roberson Norman was a real estate agent in the Northern Virginia area for over 20 years and moved to Wilmington, N.C., four years ago.

“It was kind of surreal to get the ring back. Kind of amazing that Kristin was able to track me down. It’s a credit to social media to find someone,” said Roberson Norman, who was traveling without phone service, in a text message. “Now, two of my kids are older than I was when I first got the ring.”