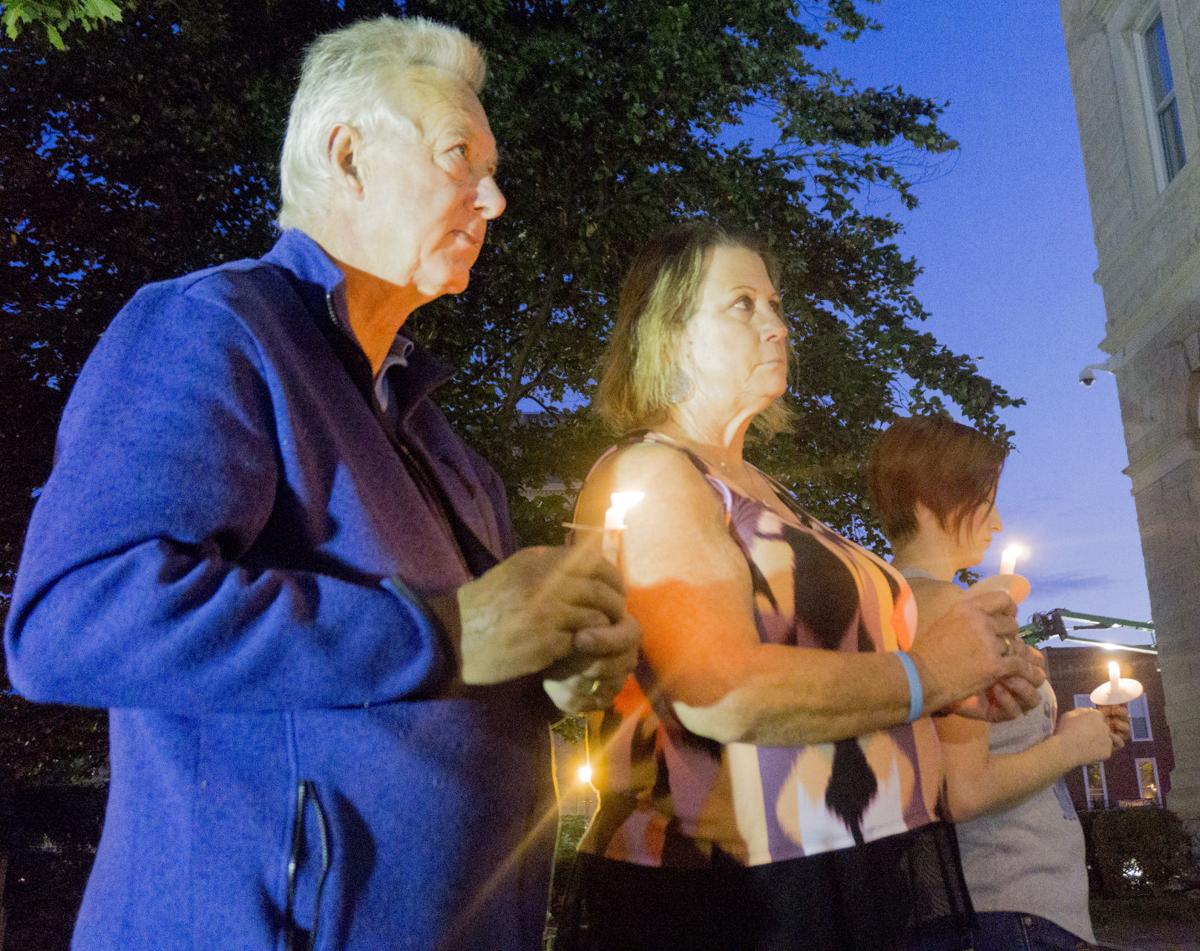 Mike Poole, left, and Kim Poole, both of Churchville, listen to the names of many who died during the third annual suicide prevention vigil on the Harrisonburg courthouse steps Saturday evening. 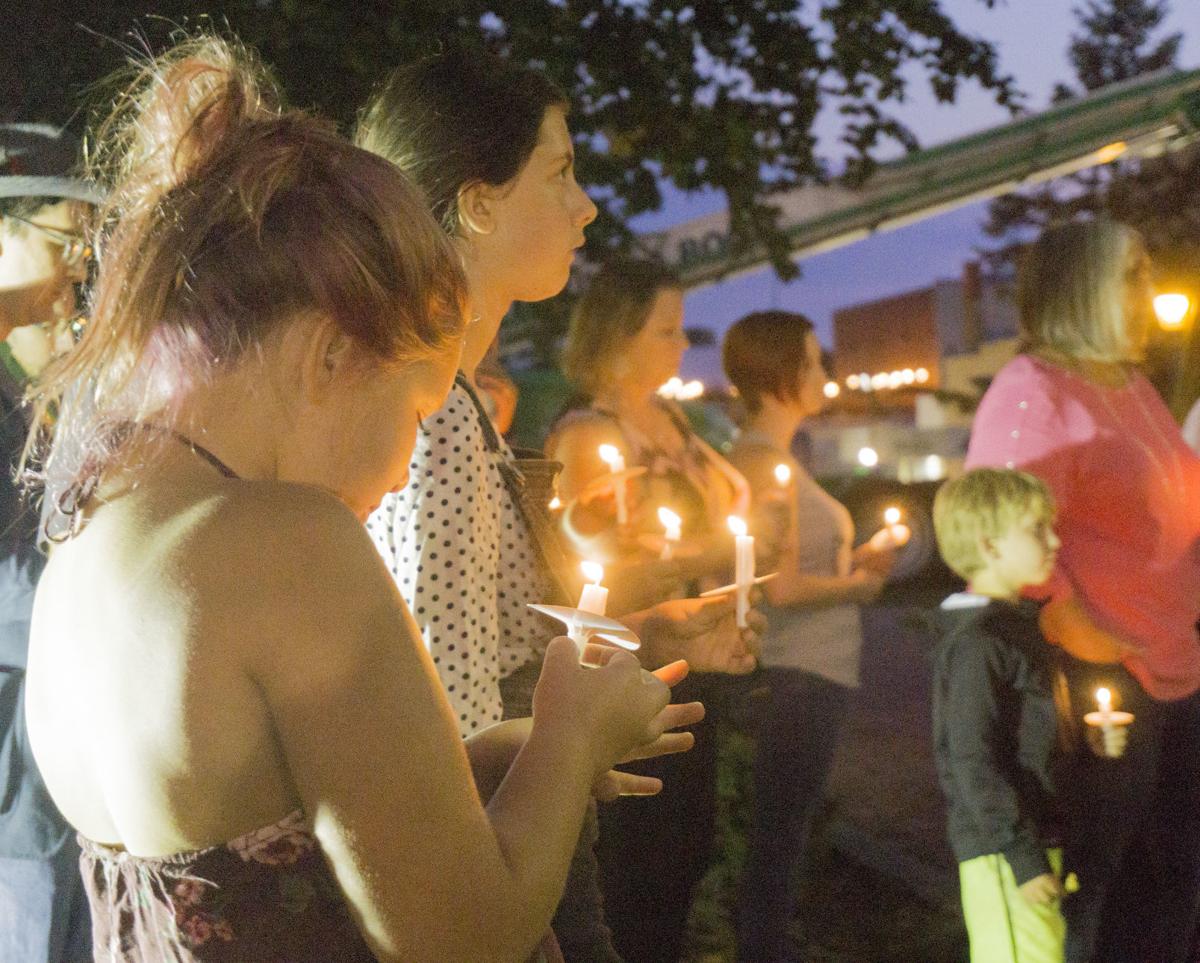 Mike Poole, left, and Kim Poole, both of Churchville, listen to the names of many who died during the third annual suicide prevention vigil on the Harrisonburg courthouse steps Saturday evening.

HARRISONBURG — The faces of more than 20 people were visible in the gentle light of remembrance candles at the third annual suicide awareness vigil held at Court Square in Harrisonburg on Saturday evening.

September is suicide awareness month. In Virginia, more than 13 out of every 100,000 people died by suicide last year, according data from America’s Health Rankings. Veterans are two times more likely to commit suicide than the average American, according to the Department of Veterans Affairs, while a study from the University of Iowa finds that  farmers are three and a half times more likely to commit suicide.

The event was organized Tiara Coleman, a Harrisonburg resident who has struggled with depression and other psychological trauma for years and survived two suicide attempts.

Starting open conversations is a goal of the event, so people can start relating more deeply about serious problems instead of simply responding “I’m fine,” Coleman said.

“If we have people who are willing to really listen, we are going to have a better platform for changing how mental health is stigmatized,” she said.

Several speakers discussed their struggles with depression, focusing on encouragement and coping mechanisms.

One of the speakers was renowned local artist Bruce Dellinger, who at the age of 14, suffered a spinal cord injury from falling 25 feet from a barn hayloft, and now draws using his mouth, as reported in a previous edition of the Daily News-Record.

He found art two years after his accident, and said it has helped him through dark times.

“Art helps me with depression and anxiety,” he said. “Usually, I try to draw things that relate to what I’m feeling.”

Dellinger is also working on a book about his life to keep his mind active.

Musician Lucas Schrock-Hurst, who uses the moniker Lightning Lucas in his music career, agreed that art is important to mental health. He was struck by lightning in 2013.

Schrock-Hurst, a Harrisonburg resident, sang songs about awareness he had been commissioned to write for peer support training sessions in Iowa.

“They use the lyrics in the training for new peer support specialists,” he said.

He has recently written a song called "This Guitar Has Saved My Life 1,000 Times Before,” about how music has impacted his life.

“I need a creative outlet, sometimes it’s just the next thing,” he said. “I need something tangible to focus on to get your head out of the negative spiral.”

The event ended, as it always does, with the names of many suicide victims over the years being read in remembrance.

“This list started two years ago at the first suicide prevention vigil,” Coleman said. “It was a list of about eight pages — all local.”

Since then the list has only grown. In 2018, another page was added to remember locals who died by suicide. This year, Coleman asked others active in suicide awareness initiatives across the country to send names for the vigil, and the list swelled to 15 pages.

Some of the 280 names included celebrities such as actor Robin Williams and musician Kurt Cobain, along with Californians, Texans, New Yorkers and Floridians who were remembered in downtown Harrisonburg as the sun set Saturday.

“Each one of those names is a person, not just a name,” Coleman said.