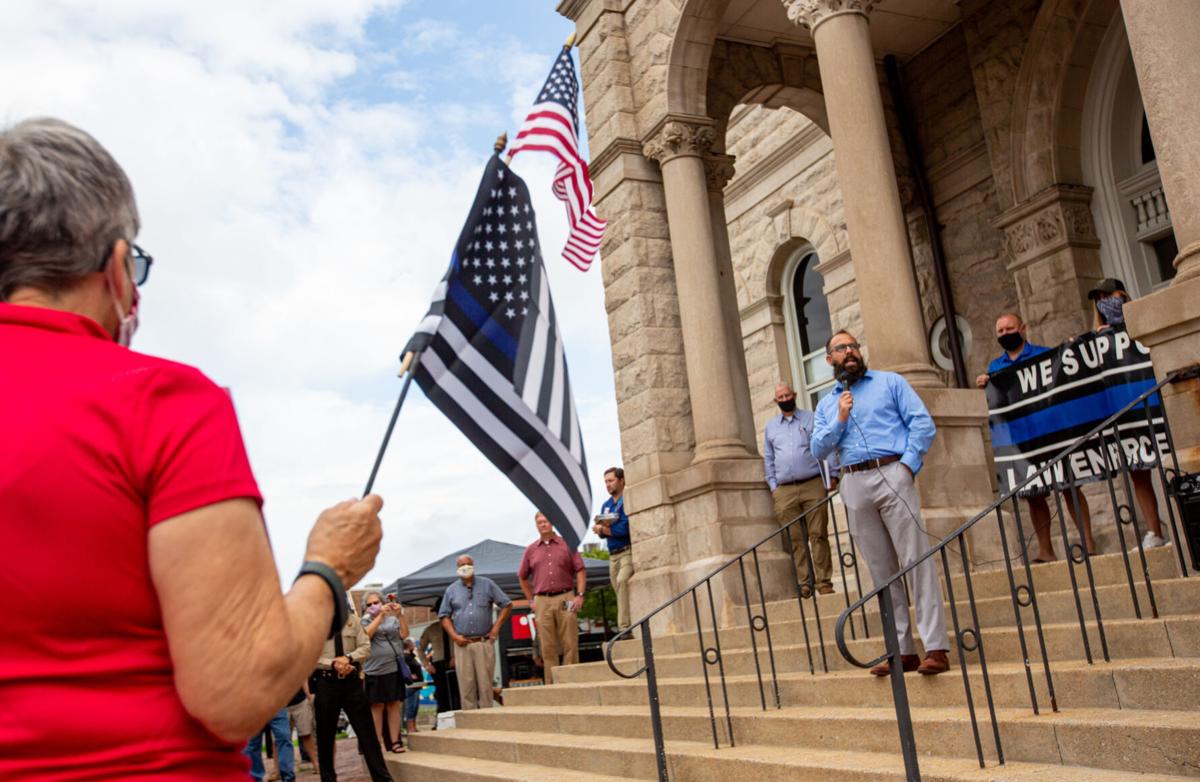 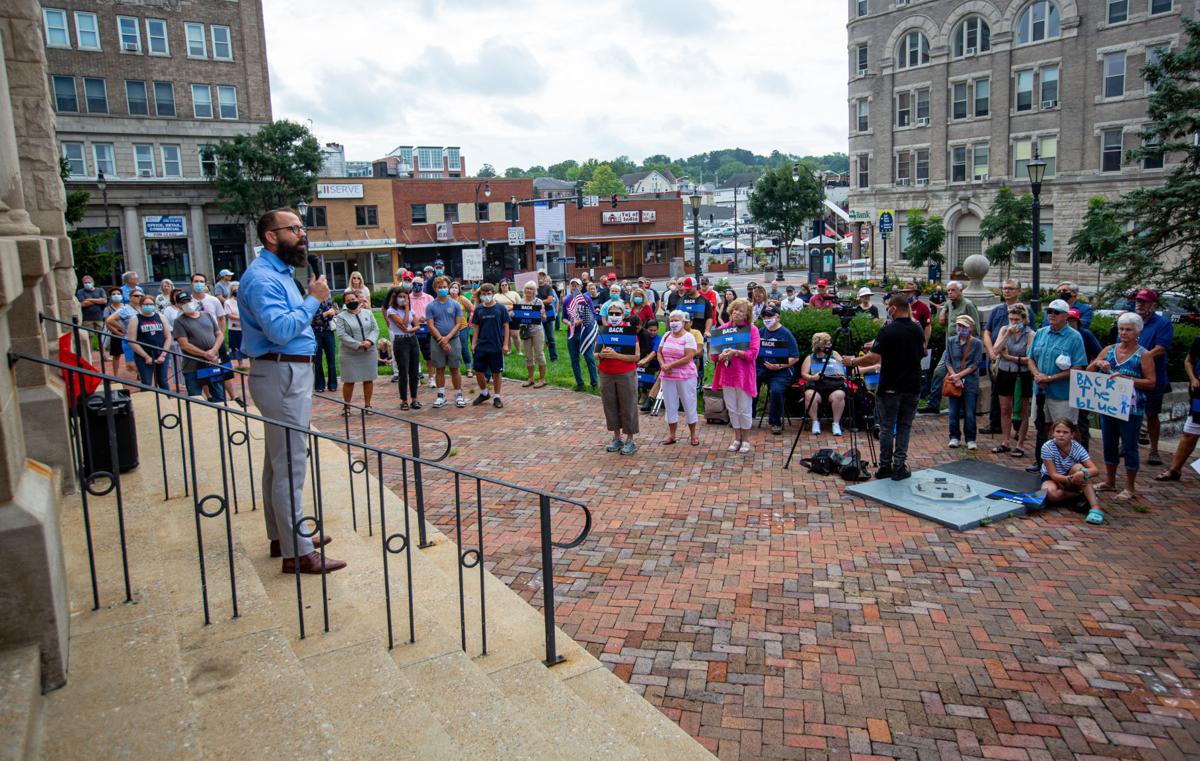 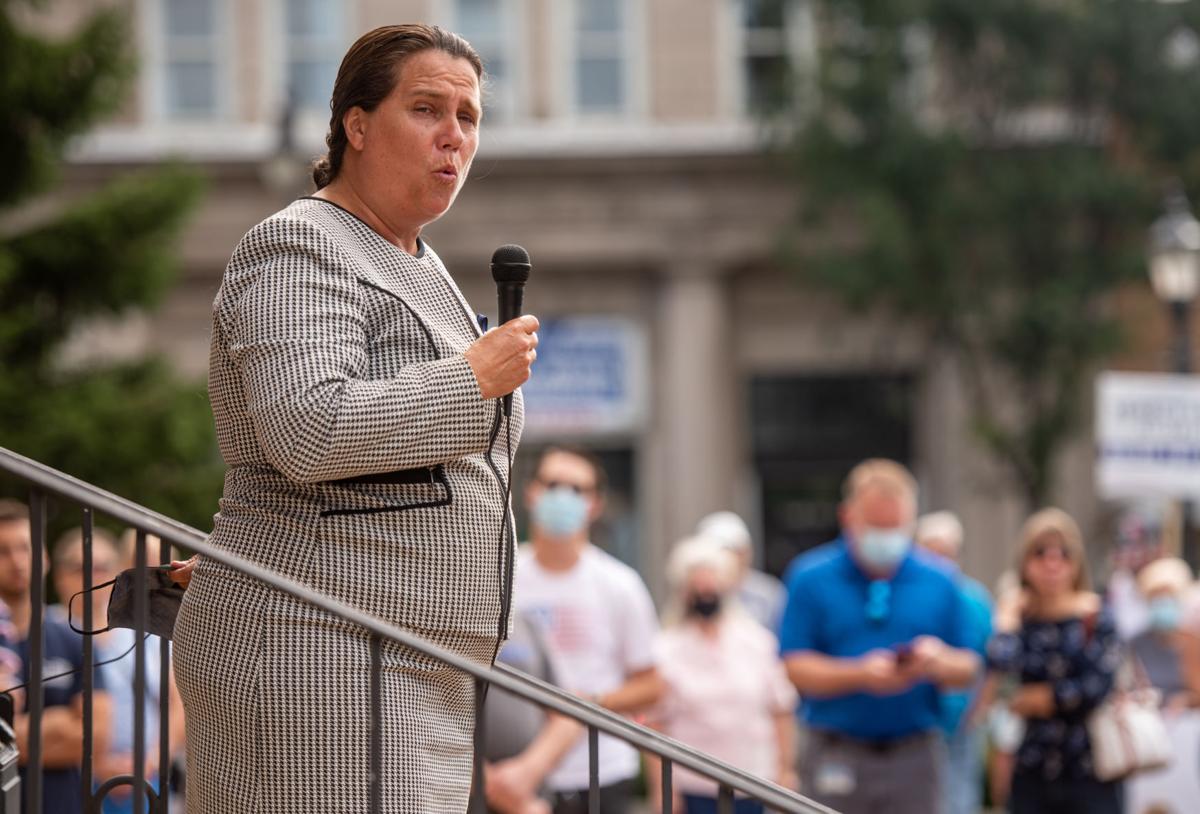 Commonwealth's Attorney Marsha Garst speaks during a Back the Blue rally at Court Square Saturday morning. 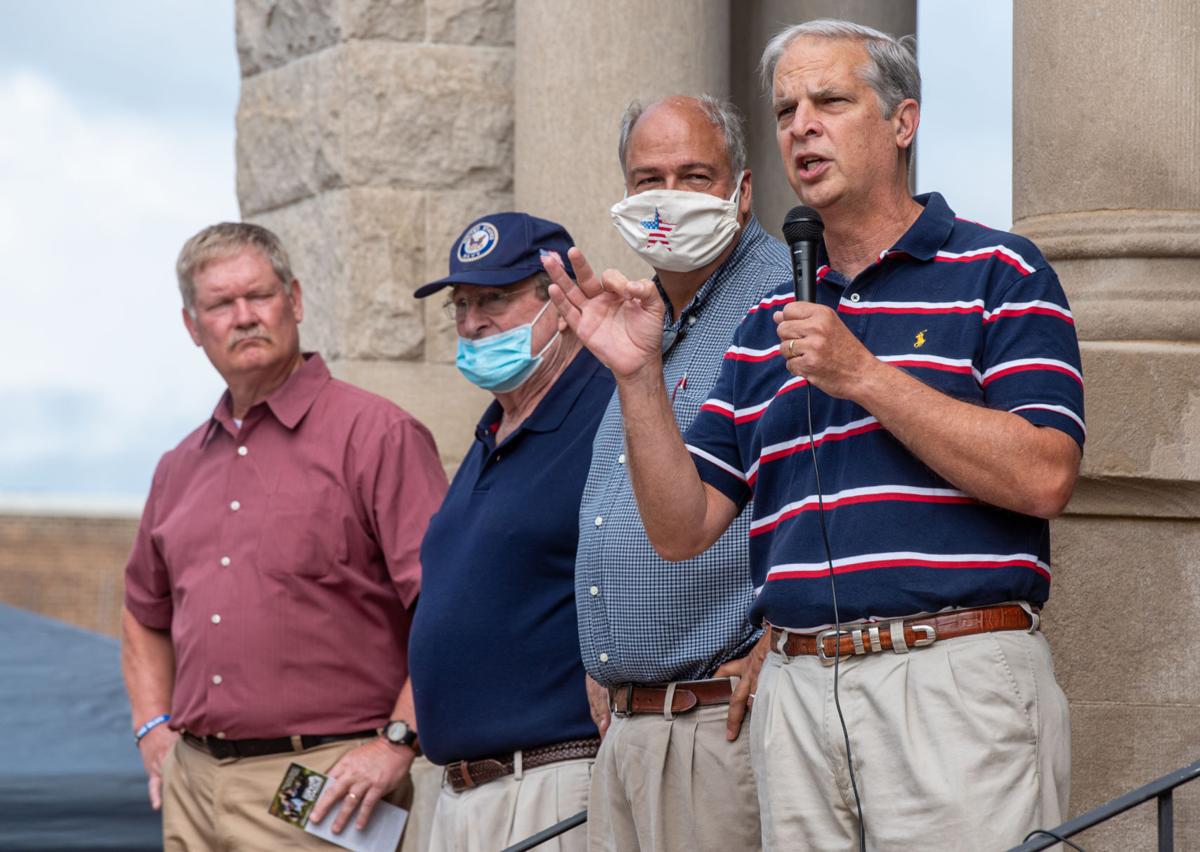 Commonwealth's Attorney Marsha Garst speaks during a Back the Blue rally at Court Square Saturday morning.

On Saturday morning, more than a hundred people took time out of their day to gather at the steps of the Rockingham County Courthouse sporting blue T-shirts, balloons and handcrafted “Back the Blue” signs in support of law enforcement.

For someone easy to make a conversation with, the turnout left Rockingham County Sheriff Bryan Hutcheson searching for words.

“It leaves you speechless,” he said.

It was a sight Hutcheson said he didn't expect to see, but to have a mixture of law enforcement officers, retirees and supporters stand together showed much needed appreciation.

“I think it’s humbling that so many people took time out of their day to be here,” he said. “It means a lot for us and I know I’m speaking for all law enforcement when I say that.”

The Back the Blue rally was coordinated by the Rockingham County Republican Party, local officials and law enforcement civic organizations that wanted to provide an opportunity for residents to gather in solidarity with local law enforcement officers, as well as celebrate the sacrifices they make to keep the community safe.

The rally came days after the Virginia General Assembly reconvened for a special session Tuesday to address the biennial budget and Gov. Ralph Northam’s proposed measures to advance equity, reform policing and protect the safety, health and welfare of Virginians during the COVID-19 pandemic.

And while legislators knew they would have to return to Richmond to address the biennial budget, bills being proposed so far left state Sen. Mark Obenshain, R-Rockingham, concerned.

“The first bill that came up was a commending resolution to commend a judge in Alexandria who just retired,” Obenshain said. “But his career was tarnished at the end with his last act.”

Alexandria Circuit Court Judge Nolan Dawkins retired as a judge in June, according to the resolution introduced by Sen. Adam Ebbin, D-Alexandria. Before his retirement Dawkins set a secured bond of $25,000 for Ibrahim E. Bouaichi, who was accused of sexually assaulting Karla Dominguez and charged with six felony counts in 2019, The Washington Post reports.

“[Dawkins] let him out on bail,” Obenshain said. “He murdered the victim. He put more trust in criminals than law enforcement.”

Obenshain introduced legislation to increase transparency and accountability to the Virginia Parole Board, which was referred to the Committee on Rehabilitation and Social Services.

On the House of Delegates side, Dels. Chris Runion, R-Bridgewater, and Tony Wilt, R-Broadway, were also in attendance during Saturday’s rally, along with Harrisonburg City Councilman George Hirschmann and Rockingham County Commonwealth’s Attorney Marsha Garst.

Runion said in an interview before the rally that it was humbling and encouraging to see the amount of people who came out to support law enforcement officers, adding that he slept well Friday night knowing his community was safe due law enforcement.

Wilt told the crowd that while they were attending a Back the Blue rally, they should not forget correctional officers, university police officers and school resource officers.

“It is critical we back them and support them as well,” he said.

Following the rally, several people lined up to speak with Hutcheson to thank him for his service, along with other officers in attendance.

Mixed in the crowd was retired Virginia State Police trooper Joe Ritchie, who served as a state trooper for 36 years before retiring in 2010.

Ritchie said he was expecting to see a decent turnout, but nothing quite like what happened.

“In this day and age, the support that we get is appreciated more than ever before,” he said. “There are so many people putting down police officers, and it’s great to see this kind of support.”

Ritchie added that while there are officers who need to and will be vetted out, police officers are “good people out to protect people.”

“We will get through this and make our community a better place,” he said.

I wonder whether Obenshain shook elbows with the sheriff.

This was billed as a bipartisan gathering so I'm wondering why there were only Republican speakers invited. Also, the print copy of the DNR was titled "Back the Blue Rally Draws Large Crowd". Compared to other rallys on Court Square (#BLM, Poultry Workers, DACCA, Climate Crisis, etc) this seemed like a rather small crowd. I was there and would say that "more than a hundred people" is stretching it.

It is a shame the way the Democrats have used minorities for their own benefit. They have manipulated these people for so long that sadly they have fallen for the deceit and lies! The Democrats have promised everything to people just before an election and guess what....none of it ever happens! The Democrats know it will never happen but so long as it gets them in power they could care less. Blacks have been left in the worst parts of every city and fed crumbs from the govt. to keep them there with the high crime, poverty, and hopelessness. The Democrats use the same lying promises to garner votes.....more money for education is just one and yet they have done ZERO to improve inner city schools. I can only hope that after this past year of of chaos and destruction that has come to the Democrat controlled cities that people are smart enough to realize that the evil Democrats do not care about anyone but their selves! President Trump may be arrogant and even a bit nasty at times but his actions speak louder than any words and he has done more for America and more for minorities than any president in 100 years. TRUMP2020

Amen to your entire post Dant. Well done, and accurate.