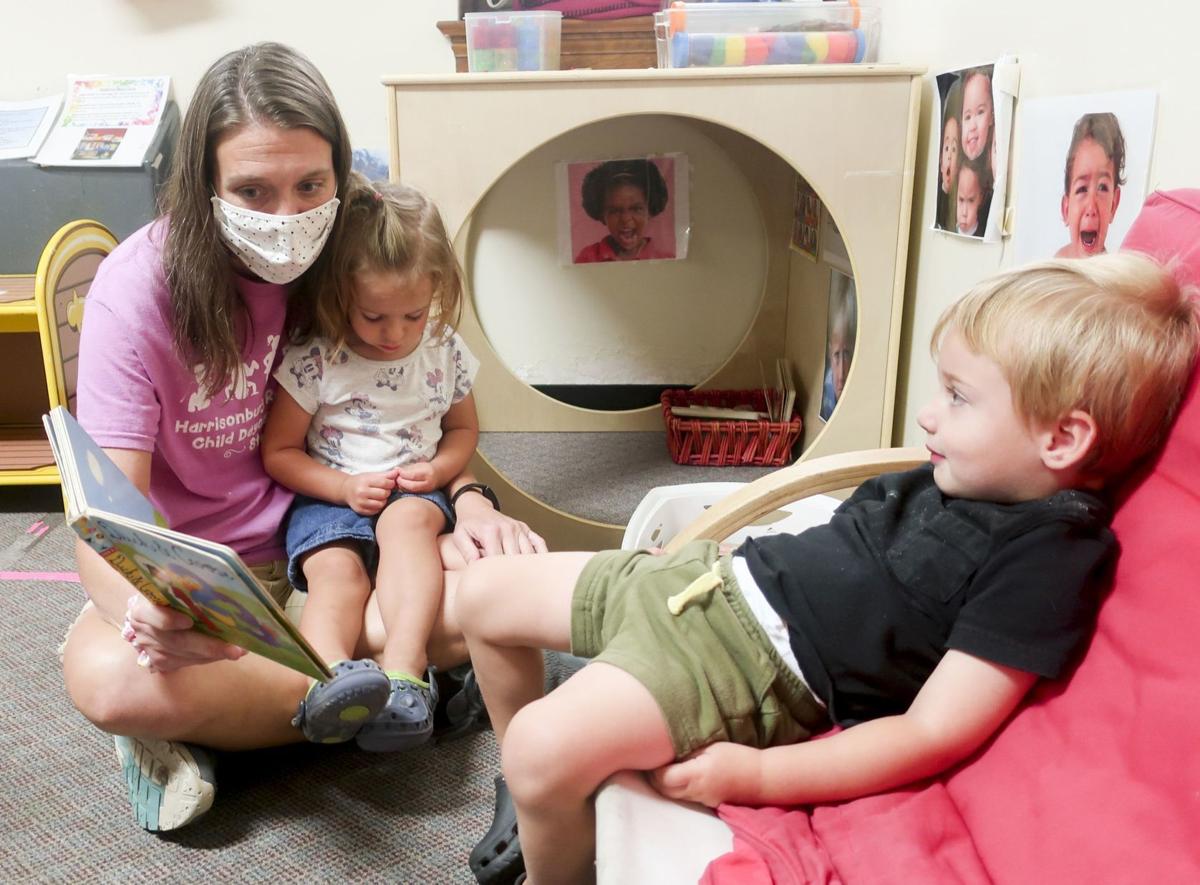 Carla Hart, a longtime child care worker at the Harrisonburg-Rockingham Child Day Care Center, reads a story to two children in her class who just got up from their nap Monday afternoon. 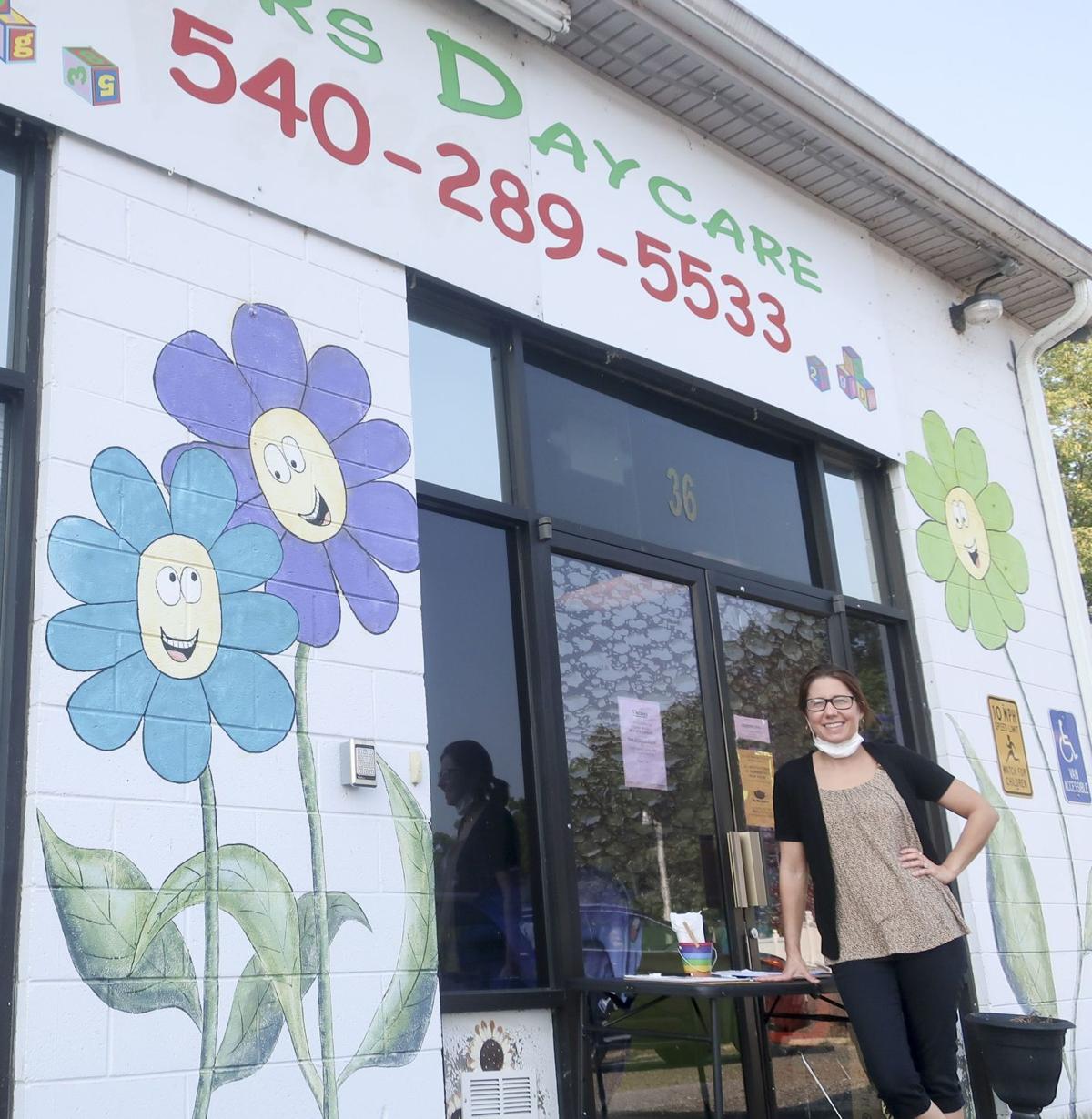 Toni Bowyer, longtime director of Lil’ Bloomers Daycare in McGaheysville, poses for a photograph outside the center’s entrance Monday afternoon.

Carla Hart, a longtime child care worker at the Harrisonburg-Rockingham Child Day Care Center, reads a story to two children in her class who just got up from their nap Monday afternoon.

Toni Bowyer, longtime director of Lil’ Bloomers Daycare in McGaheysville, poses for a photograph outside the center’s entrance Monday afternoon.

Carla Hart showed up to the Harrisonburg-Rockingham Child Day Care Center for a job shadow when she was a junior at Broadway High School.

Now, 27 years later, she is still showing up to the job she fell in love with nearly three decades ago at the same place.

“I feel like it’s a real gift to work with children, and you know you’re in the right place,” Hart said Monday.

“Seeing the smiles on their faces every day when you come to work, you feel like a rock star and they greet you with this big smile,” she said.

Others in local child care said they love what they do, but issues in the sector continue to hammer providers.

“It’s not a high-paying industry, so you really have to love what you’re doing to work in this industry and stay with it, because it’s not easy and especially in these times with COVID,” said Toni Bowyer, director of Lil’ Bloomers Daycare in McGaheysville.

Bowyer, 40, has been the director at Lil’ Bloomers Daycare since the center opened 12 and a half years ago, and she said this past year has been the hardest.

The minimum wage increases, which Bowyer said were necessary, are moving too fast for the center to keep up, coupled with the difficulty in finding workers and the disruptions to child care work during COVID.

Bowyer said she had scheduled three interviews where the prospective job seekers didn’t even show.

Child care providers are also limited in how much business they can do because the facilities have capacity requirements, according to Bowyer.

And even then, Lil’ Bloomers is not operating at capacity because of concerns about COVID spread.

“It’s making us not be able to max out our capacity, which means less income,” she said.

Paired with the minimum wage increases, “we’re really having to jump a lot in prices, and even still, we’re trying to be careful to make it affordable.”

She said some centers that closed at the beginning of the pandemic didn’t reopen, which didn’t shock her.

“I could see why they’re like, ‘I’m not going to open this back up because I could go work at Walmart and Target and bring home more than what I make as an owner and director at a child care center with less stress and work,’” Bowyer said.

Closures of child care centers exacerbates a problem increasingly common in areas like the Valley, where there is not enough child care.

“In the Valley, estimated margins [said] we’re about 500 spots short,” said Carla Moody, director of Smart Beginnings Greater Harrisonburg, which works with child care centers in the city and county. As a result, waitlists are also common, Moody said.

When parents see prices go up, it’s because the cost of providing care is increasing, Moody said.

“Just like everybody else, we do need a paycheck,” Moody said.

If the pay were higher, more people could work, but the pay is so low some people may have to choose between a job they love and paying for their own expenses and families, Moody said. And increasing pay is difficult for centers because they have to walk the line between wages and getting kids through the door affordably, according to Moody.

“It is a very slim margin in early childhood” care, Moody said.

Prices for care and the lack of ability to find a spot cause some to opt to stay at home and care for their kids instead of getting a job and paying for child care, according to Moody. Economic and employment experts have also emphasized this point as a contributing factor to the lower workforce participation rate.

Moody also said the lack of child care impacts parents who work shifts and those who have the least money. For example, parents may work opposite shifts so one can always care for the child while the other is at work, she said.

“That’s really limiting your ability as a family,” she said.

Efforts are underway locally to help address issues in the industry.

“Twenty-three childcare providers are currently participating in the effort, which will cover Augusta, Rockingham, Page, Shenandoah and Rappahannock counties as well as the cities of Harrisonburg, Staunton, Waynesboro and Winchester,” said a Sept. 7 JMU press release.

The Harrisonburg-Rockingham Chamber of Commerce, local United Way, Smart Beginnings Greater Harrisonburg and the Harrisonburg City Public Schools system are trying to establish a leadership task force to address the “critical point” child care is at locally, according to Moody.

Moody and other directors meet regularly to discuss problems in the sector.

Ramona Shenk, director of Minnieland Academy in Harrisonburg who has worked there since 1994, said she has also seen the issues other child care providers have mentioned.

She said she has started telling parents who enroll their kids at Minnieland to expect price increases annually.

“I don’t think people realize the insurance on the center and the ground maintenance and food and supplies” cost a lot of money, Shenk said.

And though the reality of dollars and cents makes itself known, the passion the child care providers have can be seen in the child care center classrooms, hallways and playgrounds of Harrisonburg and Rockingham County.

“I feel like it’s what I should be doing, and I’ve done it most of my life and know how to help people,” Shenk said.

She said employees at Minnieland, like other local child care centers, have cared for kids for a long time, just like Hart and Bowyer.

“It’s very hard and it’s stressful, but we show up every day because of the kids,” Bowyer said. “They’re funny. Especially at this age, they’re learning every day. That’s why we show up — for them.”

“I do not see myself doing anything else other than taking care of children and helping them grow and learn and develop,” Hart said.