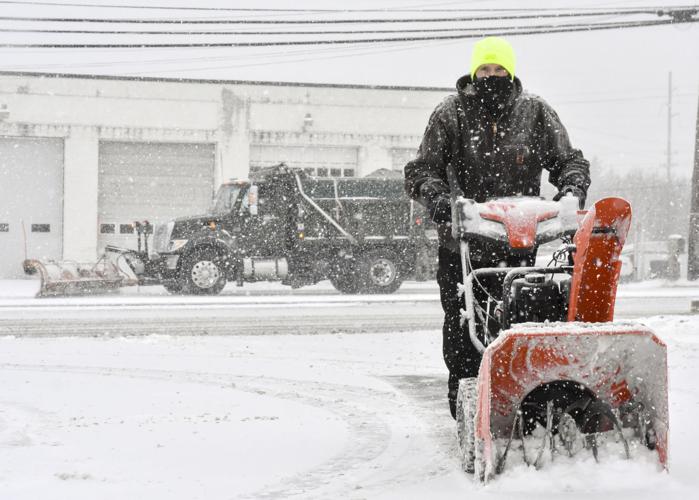 Anthony Carmichael, 48, of Bridgewater, takes his snowblower back to his trailer after clearing a layer of snow at the Quarles fleet fueling station in Broadway on Sunday. 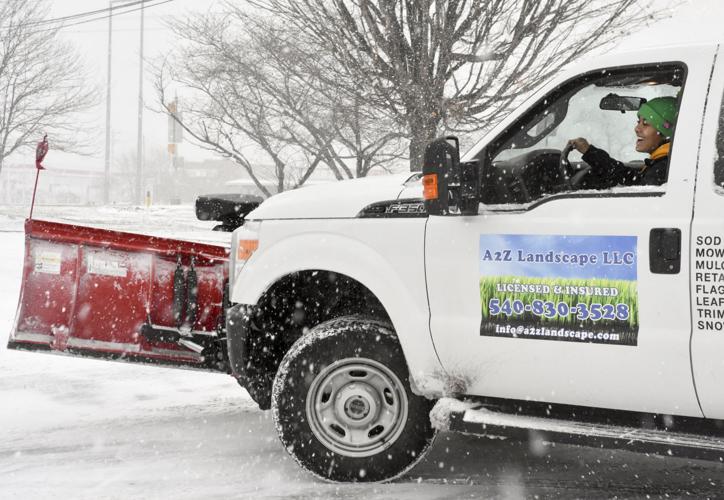 Gabi Jerez, 21, of Harrisonburg, smiles as she navigates a snowplow truck to clear snow in the parking lot of the Cracker Barrel in Harrisonburg on Sunday. 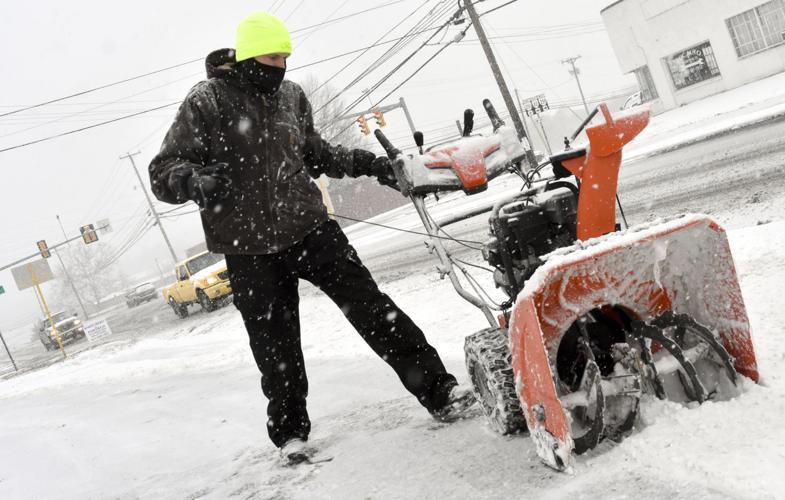 Anthony Carmichael, 48, revs up the snowblower he is using to clear snow at the Quarles fleet fueling station for his contracting business Sunday afternoon.

Anthony Carmichael, 48, of Bridgewater, takes his snowblower back to his trailer after clearing a layer of snow at the Quarles fleet fueling station in Broadway on Sunday.

Gabi Jerez, 21, of Harrisonburg, smiles as she navigates a snowplow truck to clear snow in the parking lot of the Cracker Barrel in Harrisonburg on Sunday.

Anthony Carmichael, 48, revs up the snowblower he is using to clear snow at the Quarles fleet fueling station for his contracting business Sunday afternoon.

The temperature — far from tropical — was below freezing. Carmichael just finished a lap of the Quarles fleet fueling lot in Broadway before he would head to Bridgewater to spread salt. While he works, he said he likes to listen to WSIG.

“There’s a lot of traffic that comes in and out so I may have to camp in the truck [because] it looks like we may get an inch and hour,” Carmichael said, the condensation from his breath piercing the flurry of snowflakes falling from the gray sky.

Working in a snowstorm is not new to Carmichael. He started his own contracting business seven years ago, A&G 1 STOP, which does a variety of services.

“Just wanted to be my own boss,” Carmichael, 48, said “Tired of working for the man.”

Clearing the Broadway lot Sunday afternoon took him about two hours and it was far from the last thing he needed to get done during the storm.

It would have been quicker if he had his snowplow — but his truck’s power plant seemingly had other plans.

“The engine caught fire this morning around 5 a.m.,” Carmichael said, the irony of the timing not lost on him. “I had to keep pouring water on it to get home.”

He’s fairly certain what’s causing the issue, but not trying to risk blowing the engine, he opted to use the blower Sunday to make sure he could honor his business agreements as best he could.

“It’s good stuff,” Carmichael said of the cold weather with a smile on his face. “It keeps me young.”

With the snow this year, Gabi Jerez, 21, of Harrisonburg, started driving a snow plow for her father’s Harrisonburg business A2Z Landscape.

Sunday was her third time clearing the snow from behind the wheel of a plow, she said, before continuing clearing the lot of the Cracker Barrel restaurant in Harrisonburg.

“There’s not much mulching we can do in this weather,” she said, leaning out the window of the idling truck.

She and her crew started clearing parking lots, sidewalks and more around 11 a.m. and expected to be out for a long time yet. Snow first started at the Dale Enterprise weather station east of Harrisonburg around 11 a.m. and roughly 4 inches of snow had fallen by around 5:30 p.m., according to Scott Cook of the station.

But even after the snow would stop falling, there’s plenty of customers and roads that need to be cleared and thus work that needs to be done.

“We’re not going to be able to sleep til tomorrow night,” Jerez said.

Though Jerez is still learning the best techniques to driving a plow, she’s got a great mentor — her dad, Alex Jerez, 51, of Harrisonburg.

“I’ve been doing this for a long time,” he said.

Carmichael was looking at the same slim prospects for sleep as he too would be up even after the snow stopped falling, which was projected for late Sunday night.

“I have to do what’s called a post-storm [review] and make sure everything’s clear around the pumps and then put another layer of salt so it doesn’t freeze over,” Carmichael said. “So it’s going to stop [snowing] around 3 a.m., so I’ll probably be here right before daylight.”

No matter the hours or the weather, running his own business is worth it, Carmichael said.

When asked if he’d have it any other way, he replied quickly and succinctly.