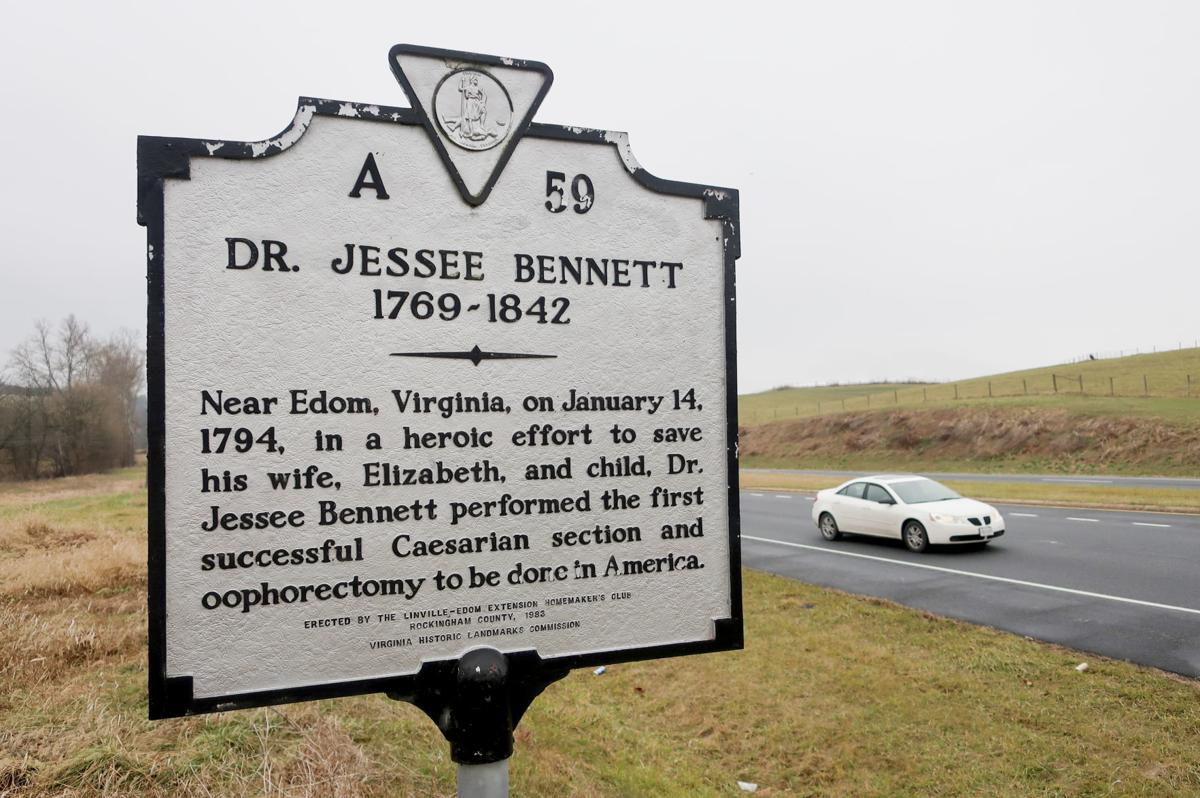 The Jessee Bennett marker, located on the eastern side of Harpine Highway in Rockingham County south of Edom, explains the story of the surgeon’s harrowing success in saving both the life of his wife and daughter in 1794. 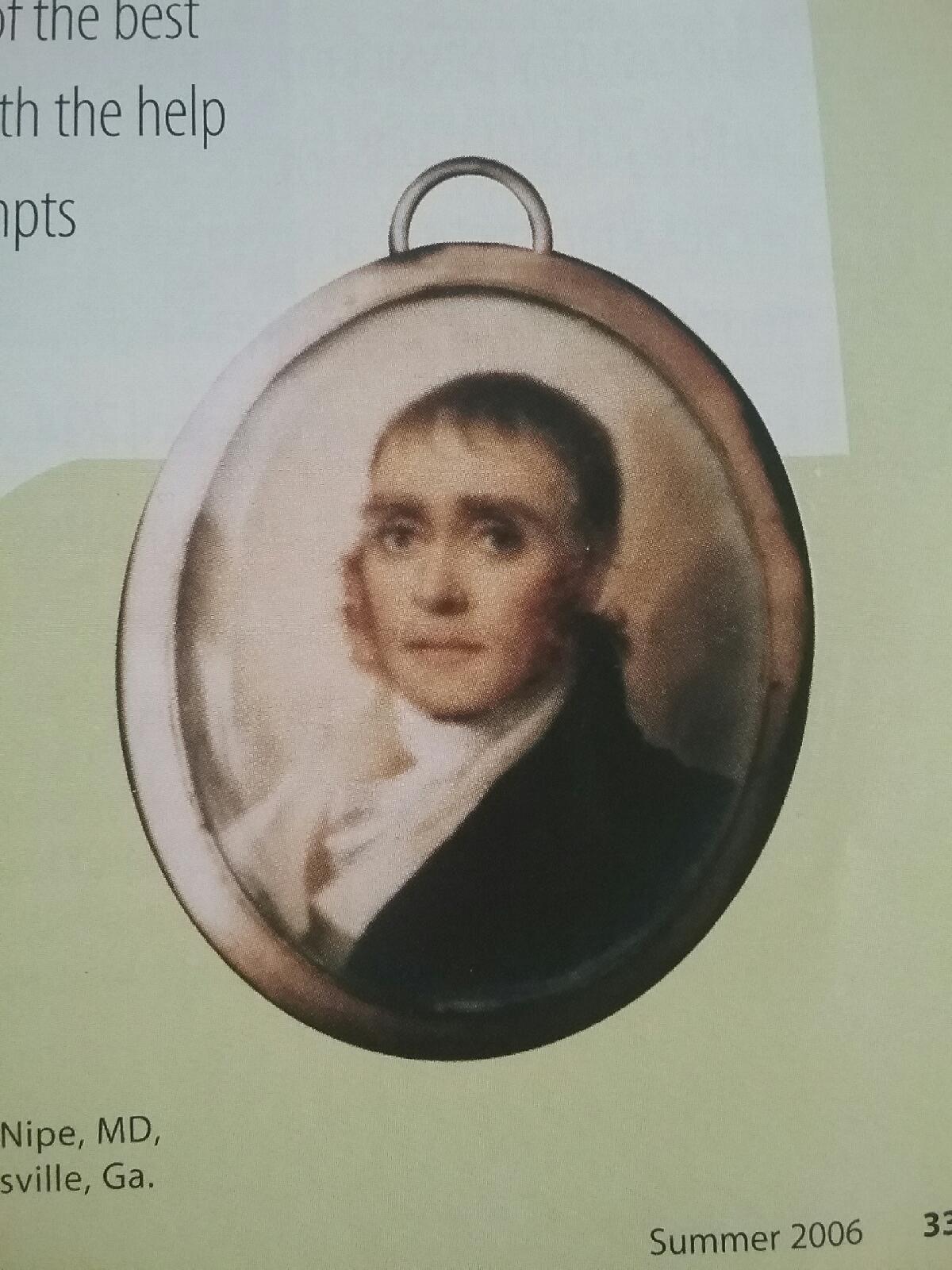 Jessee Bennett performed the first cesarean section in North America, saving both his wife, Elizabeth Hog, and their infant daughter, in 1794 in Edom.

The Jessee Bennett marker, located on the eastern side of Harpine Highway in Rockingham County south of Edom, explains the story of the surgeon’s harrowing success in saving both the life of his wife and daughter in 1794.

Jessee Bennett performed the first cesarean section in North America, saving both his wife, Elizabeth Hog, and their infant daughter, in 1794 in Edom.

EDOM — Just over 225 years ago, Rockingham County and Harrisonburg were both still in their infancy. And in Edom, both a baby girl and mother were saved by the actions of a surgeon who refused to let them die.

In the quiet hills of northern Rockingham, on Jan 14. 1794, Jessee Bennett performed the first cesarean section in North America, saving both his wife, Elizabeth Hog, and their infant daughter.

When Hog was in labor, she was unable to normally birth the child for an undetermined reason. Bennett, though himself a well-regarded surgeon in his own right, sent for the help of another doctor, Alexander Humphreys of Staunton.

The options appeared grim. To do nothing would mean the death of Hog and the baby. The child could also be sacrificed to save Hog, but she insisted her daughter be saved through c-section.

To perform a c-section, doctors cut the baby from the uterus. At the time, the surgery was a near-certain death sentence for the mother.

Humphreys declined to participate, according to others present at the birth. So Bennett, husband to Hog and father to the child, set to work with both their lives on the line.

The story of Bennett’s surgery is retold in the 2000 book “Virginia Valley Records” by John W. Wayland, based on an article written in Virginia Medical Monthly from January 1929.

Wayland writes “in 1794, a Cesarean section with living mother and child was practically unknown anywhere in the world, even in the chief medical and surgical centers.”

Bennett successfully freed the child, who is unnamed in documents, and removed Hog’s ovaries. This was also the first time that form of surgery had been performed in North America.

He then stitched Hog with “stout linen thread,” according to information in Wayland’s book.

Hog would go on to live a full life, dying “many years later” and the unnamed child of Bennett and Hog lived to the age of 77.

Since the end of the 18th century, the risks involved in having a c-section have dropped “enormously,” according to Dr. Cathy Slusher, the medical director for the Family Birth Place at Sentara RMH.

“We just have better equipment all the way around and 200 years of experience to draw best practice,” she said.

In 2019, Sentara RMH delivered 604 babies via c-section, according to the hospital’s family birthplace staff.

Nationwide, 31.9% of births in 2018 were performed via c-section, according to the most recent data available from the Centers for Disease Control and Prevention.

Slusher said a rate of around 25 to 30% is reasonable.

There are many factors that have led to the increase, according to Slusher, including the fact that people are more nourished than in the past, leading to larger babies, which can be difficult to traditionally birth.

Penny Paul Imeson, the executive director of the Heritage Museum and the Harrisonburg-Rockingham Historical Society, said shared history, such as Bennett’s deed, helps to bring communities together.

“It’s just remarkable the stories we have here in Rockingham,” she said.

However, even shortly after this medical feat, Bennett’s achievement was obscured. Credit for the first c-section in the United States was widely given to Dr. John Richmond in Newtown, Ohio, during 1827, despite Bennett’s surgery being nearly 35 years prior.

Bennett is referred to as “the doctor that history almost missed” by the Alleghany Regional Family History Society.

“It’s not like a medical college grew up around Jessee Bennett’s home,” Imeson said. “But that’s what’s so interesting — all the different people who are just normal people that do remarkable things.”

“It can be so inspiring,” she said.

Bennett also served as an Army surgeon during the Whiskey Rebellion, a short-lived uprising after the American Revolution in response to taxes on whiskey, and in the 2nd Virginia Regiment during the War of 1812. Prior, he was a representative in the Virginia General Assembly during 1808 and 1809.

The Virginia Historic Landmarks Commission has a historical marker placed on the first road into Edom off northbound Harpine Highway. The name of that road is Jesse Bennett Way, another spelling of the surgeon’s name.

“It’s very exciting that it happened here first and it just shows our community has always been progressive,” Slusher said. “We’ve always been looking out for the best interest for the mother and baby.”

This is also the site of an old grist mill at Jesse Bennett Way (intersection of Rt. 721, Linville Edom Road). Here you come across an old stone structure with a steel mill wheel abutting an old doubled arched concrete bridge.