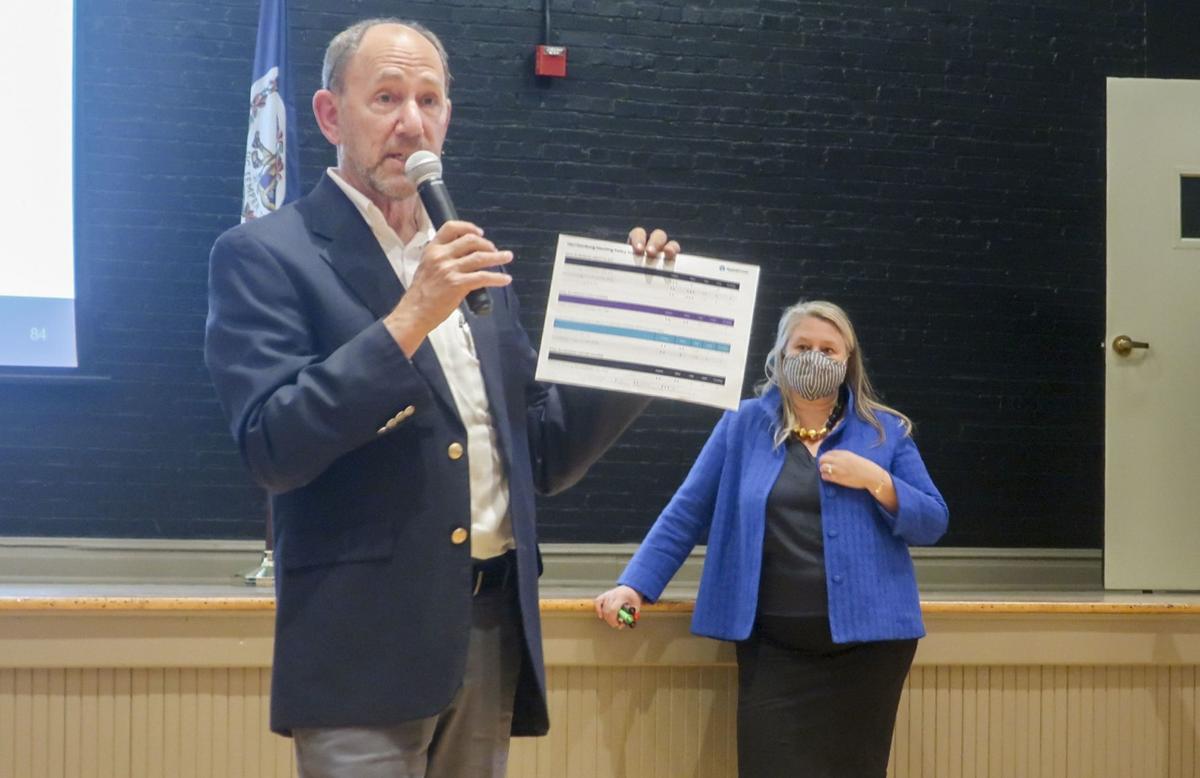 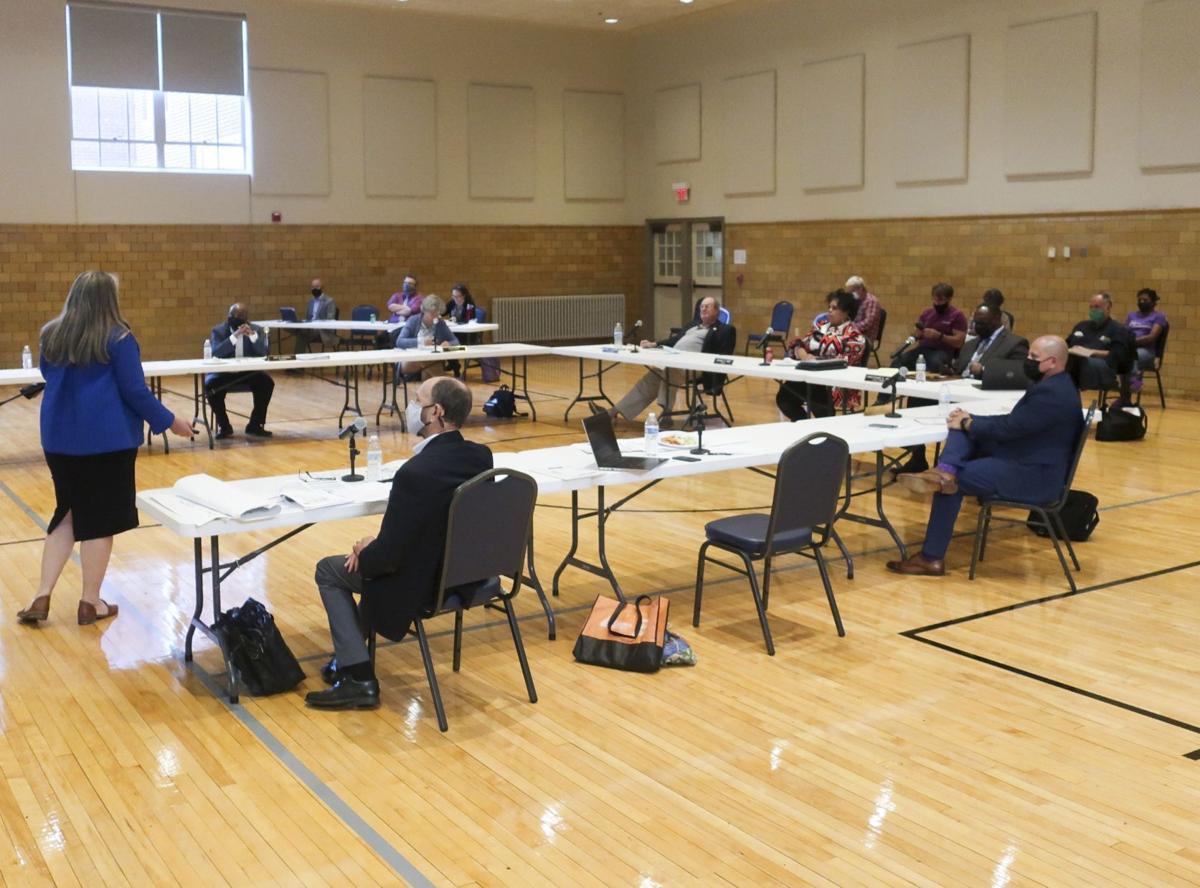 City Council, staff and members of the public listen to Erica Sims of HousingForward on Wednesday. 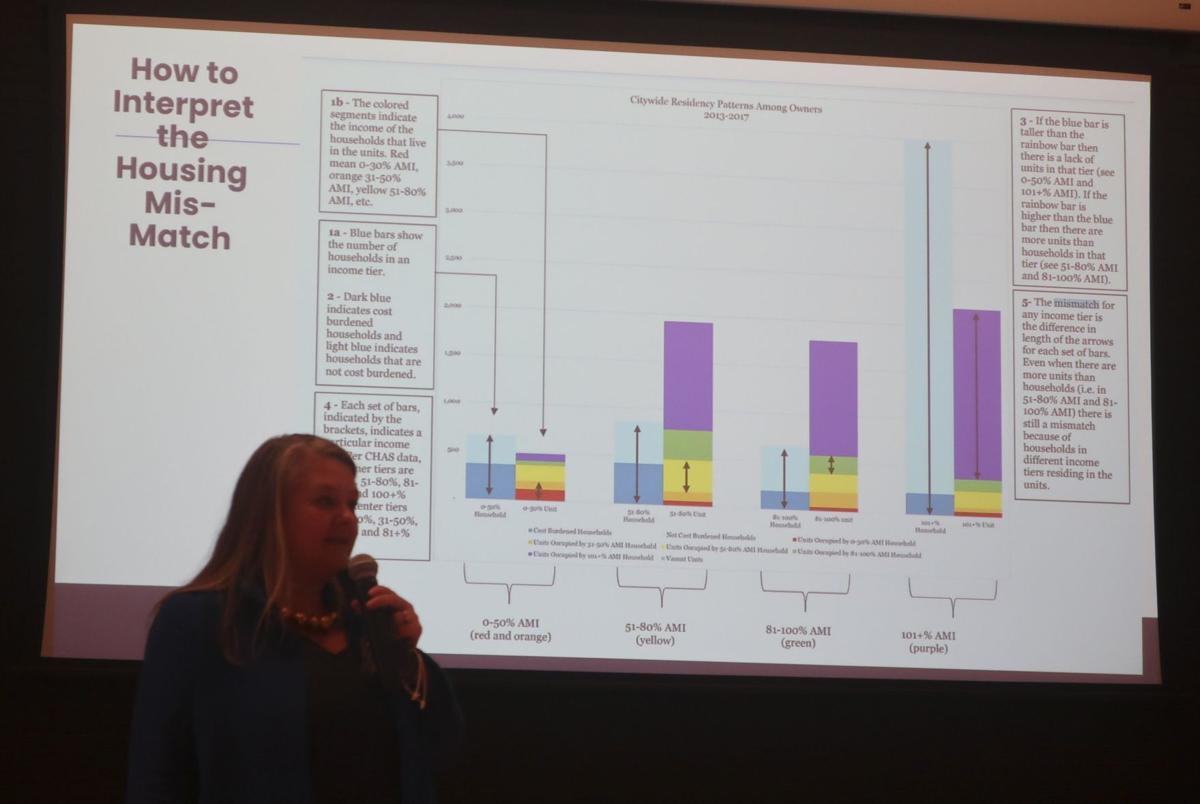 City Council, staff and members of the public listen to Erica Sims of HousingForward on Wednesday.

City Council tasked staff to present ordinances to tackle its most immediate housing goals Wednesday at the end of a two-day housing summit held at the Lucy F. Simms Center in Harrisonburg.

The five council members agreed on what could be most easily achieved and will have the largest anticipated impact to provide more low-cost housing in the city.

These goals include utility connection fee waivers and a 10-year tax abatement for developers, opening city-owned land for development proposals, and completing the ongoing zoning and subdivision rewrite.

Staff from HousingForward Virginia guided council and staff through presentations, discussion and panels about how to turn the city’s housing study data and recommendations into actions that will have an impact over the two-day event.

Council also heard from a developer, a neighborhood development coordinator and a housing coordinator from across the state to learn what they are doing that works to expand the supply of affordable housing.

Erica Sims, of HousingForward, said the four goals council tasked staff with are large, and council should be patient with staff as they draft ordinances or other policies related to the goals.

Staff will also have to do research outside the data from the housing study and this week’s summit, according to Michael Parks, city spokesman.

Since Virginia is a Dillon rule state, city staff must know what they can and can’t put in an ordinance to achieve council’s goals, Parks said. The Dillon rule stipulates that local governments have only the powers explicitly granted to them by the state government.

Andrew Friedman, also of HousingForward, said council must be realistic about housing goals and cannot promise all residents unconditional shelter, since the city may be taken advantage of by people coming from outside and then demanding the same things residents have already been promised.

Mayor Deanna Reed said she wanted to be able to promise shelter, and the idea that cannot it be promised didn’t sit well with her.

Throughout the two days, Councilman Sal Romero regularly broached the importance of taking into account those who may not be accounted for in the data or did not participate in surveys due to lack of access, and Councilwoman Laura Dent also regularly spoke about her desire for more energy efficiency and green housing requirements. Councilman Chris Jones regularly asked questions.

Sims said tax credits are the source of most funding for low-income housing these days, and the best way for council to address its housing mismatch is to focus on increasing stock for working-class families who are facing the smallest supply of available housing for rent and for purchase.

Thousands of Harrisonburg households live in homes unaligned with their income level, resulting in a “housing mismatch” as high-income residents living in lower-cost housing cause more strain on an already tight supply of affordable housing.

The creation of more upper-class housing may not draw higher-income residents out of their lower-cost housing, and it wouldn’t help alleviate the dearth of affordable housing for those on the lower end of the economic spectrum, Sims said.

Council and HousingForward staff discussed a potential housing trust fund, which activists have called on Harrisonburg and Rockingham County to create jointly.

Housing trust funds, once begun by localities, receive public funding and private donations to promote affordable housing, according to the Housing Trust Fund Project, a group that provides information about the initiatives.

The roundtable discussed a legislative change that can also have an immediate effect on access to housing for some of Harrisonburg’s poorest residents.

In July, a new law went into effect that landlords can no longer discriminate and refuse to rent to those who are on Section 8 housing vouchers.

“This was happening here in Harrisonburg,” Reed said.

Virginia Attorney General Mark Herring has filed lawsuits against 29 landlord firms in and around Richmond for violating the new law, according to a Monday press release from his office.

Sims recommended council and staff contact landlords to let them know about the law change.

Sims also said developers are increasingly receptive to building affordable housing because they recognize how bad the housing crisis has gotten for working- and middle-class families, but there needs to be clear communication and the right conditions.

“As much as private developers are seeking to maximize profit, this is not a great market for them either, and many would like to find ways to serve a broader range of housing markets than just the top end,” Sims said. “I have been in a number of conversations with developers who say this is not right.”

Friedman said council should keep a clear channel of communication open with developers to know what and why they are planning to build.

“Clear developer communication can really be the difference between a terrible council meeting and not terrible meeting, and I’ve seen both of them,” Friedman said.

He said clear communication helped give the Virginia Beach City Council the background it needed to support plans for the development of an 80-unit permanent supportive housing development to help homeless people get and stay off the streets, even when neighbors opposed the project.

Permanent supportive housing also reduced the state’s cost of housing each of the individuals by $1,375 and reduced costs for jails, private and state hospitals, and community services boards by 29%.

Sims, Friedman and the council members said the Harrisonburg Redevelopment and Housing Authority has resources that are best used to help those who earn less than 30% of the area’s median income, which was $71,900 in 2020, according to the U.S. Department of Housing and Urban Development.

On the other hand, council’s tools are best suited to incentivize housing for those who earn 30% to 60% of the area median income, according to Jones.

“We need to work together on what we would like that to look like,” Reed said. “We don’t want it concentrated in one area like it is now.”

Friedman and Sims said the city has many good things going toward addressing its housing issue, including the upcoming search for a housing coordinator, the completed housing study and the ongoing zoning and subdivision revision.

…”Thousands of Harrisonburg households live in homes unaligned with their income level, resulting in a “housing mismatch” as high-income residents living in lower-cost housing cause more strain on an already tight supply of affordable housing.”

This statement makes no sense to me. I don’t live in the ‘Burg but in a nearby jurisdiction.

I know no folks who are financially “comfortable” that actively seek shelter in places geared to lower earners.

However, unless prohibited by regulations, people should be free to live ANYWHERE they choose, if they can (realistically) buy the property, afford the rent, pay the taxes and, importantly, live peaceably with neighbors.

I see no reason why any city should be actively wasting resources to solve housing if it recklessly invites masses of illegal immigrants and others to “come on in.” JMU is also guilty of expanding enrollment (i.e. revenue) then relying on others to keep supplying inexpensive housing with available land for homes shrinking away.

Excellent post Newshound. Demokkkrats are totalitarian and authoritarian by nature. They want to tell everyone where they should live, what they should eat, what kind of car they should drive, etc. In short, Demokkkrats are, at heart, communists, who wish to control literally every aspect of our lives. The Demokkkrat party is controlled by Satan, and as such, pure evil.

Yes, prodigal, the Democrat/Marxist Party is the Party of Satan.