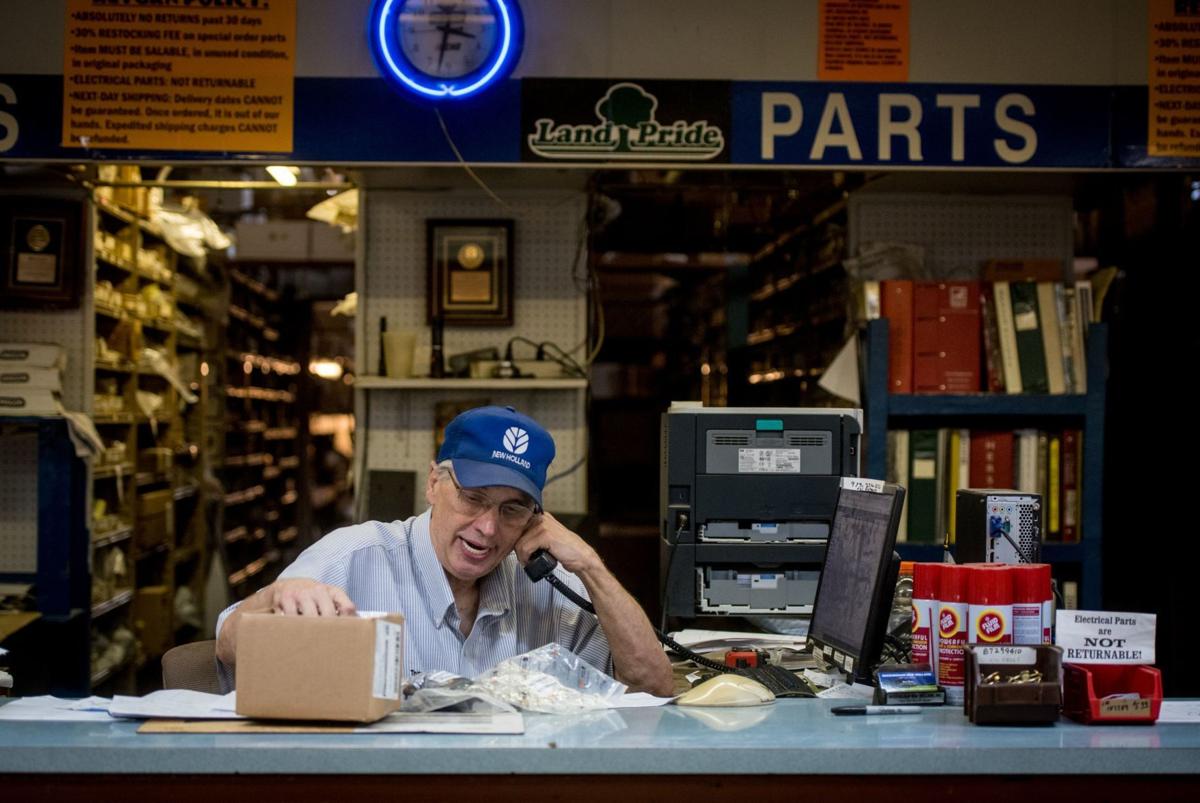 Rockingham New Holland employee Tom Teter speaks on the phone with a customer at the parts desk Tuesday. 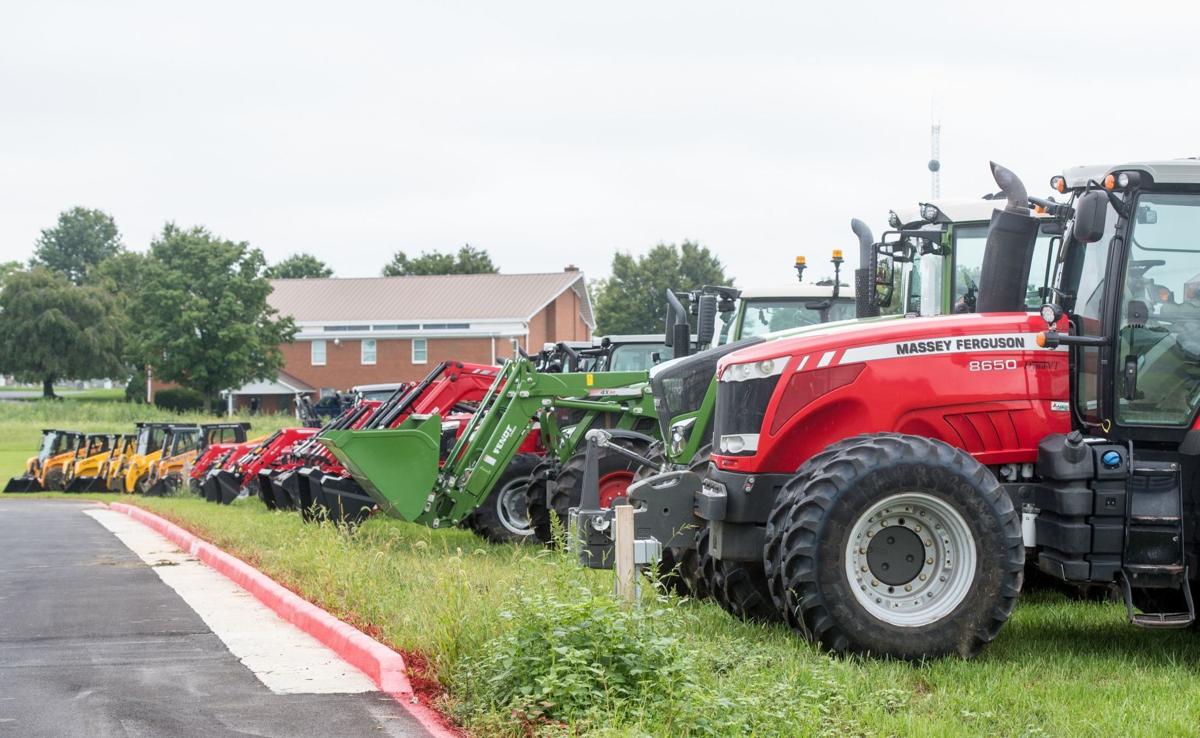 A row of tractors sit outside of Binkley and Hurst’s new location on South Valley Pike Tuesday. 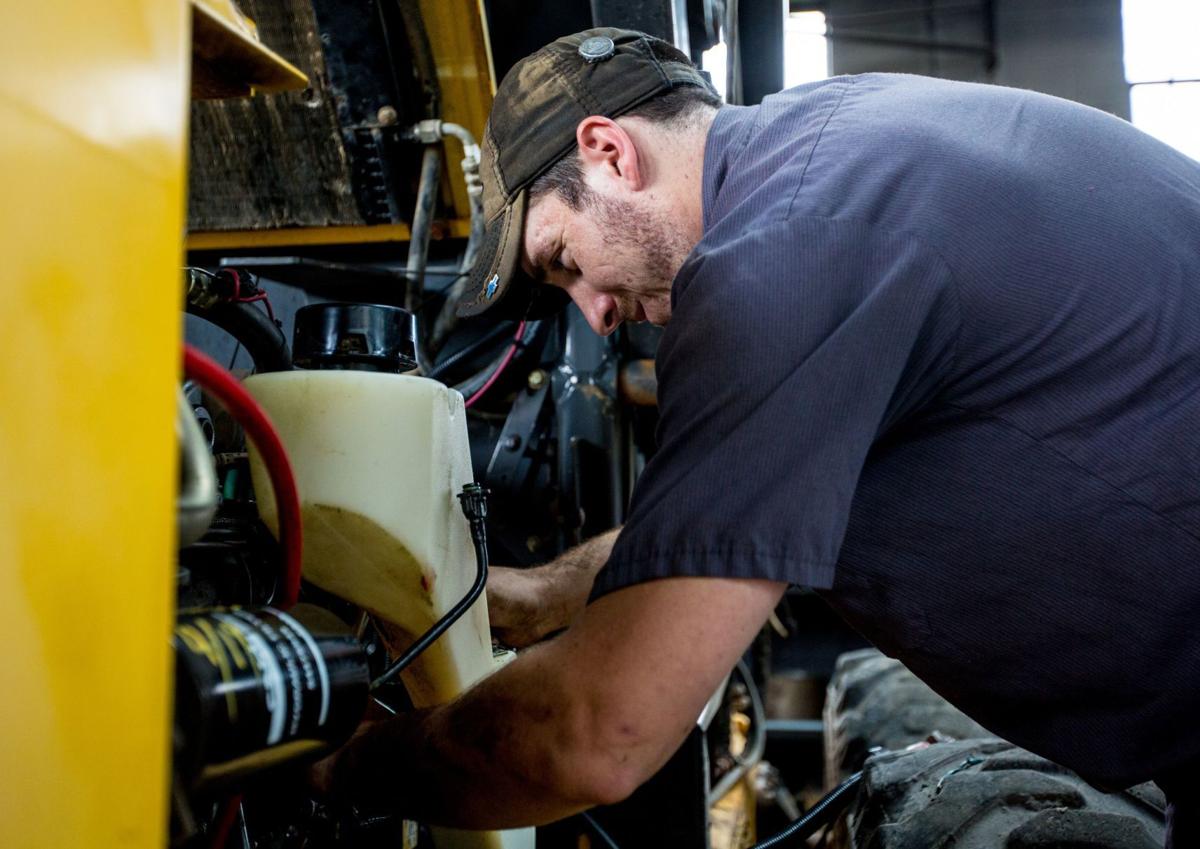 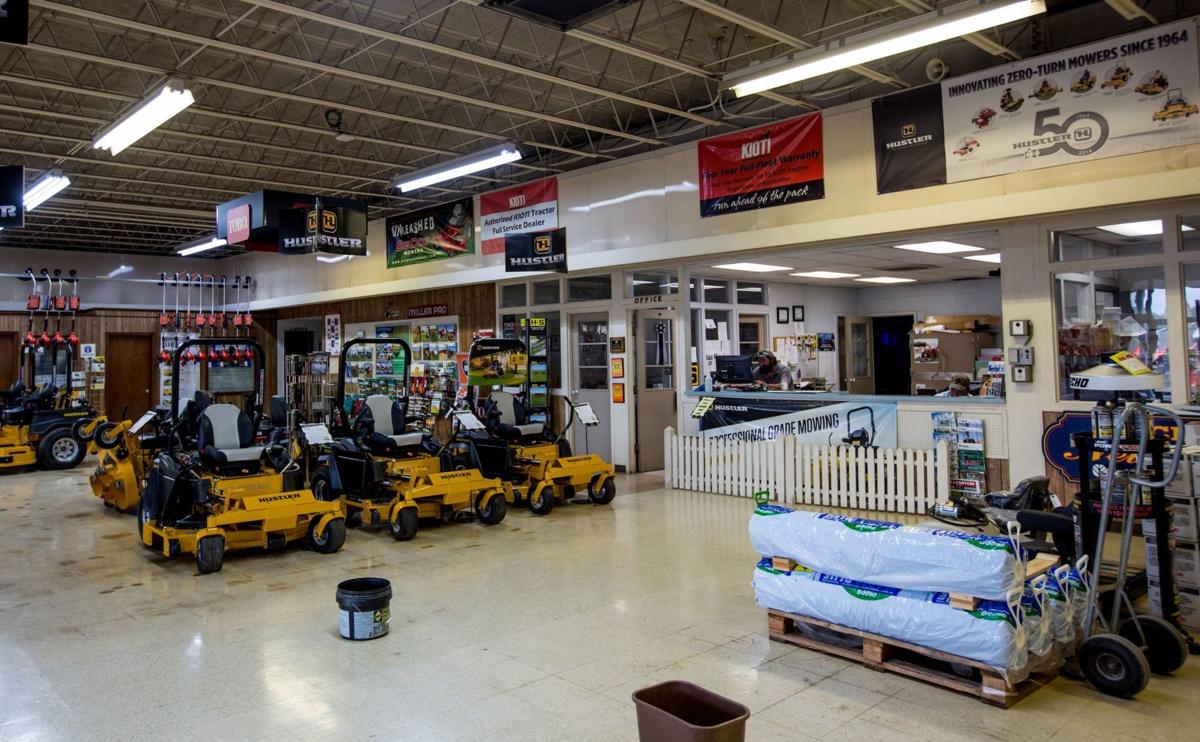 Rockingham New Holland offers sales and service of a full range of yard and farm equipment.

Rockingham New Holland employee Tom Teter speaks on the phone with a customer at the parts desk Tuesday.

A row of tractors sit outside of Binkley and Hurst’s new location on South Valley Pike Tuesday.

Rockingham New Holland offers sales and service of a full range of yard and farm equipment.

A year ago, in a booming economy, agriculture equipment chain Binkley and Hurst announced it would be combining its two Rockingham County locations into one new site on U.S. 11 just south of Harrisonburg.

“It seems like our business has been more and more productive each year,” said Brandon Auville, the sales manager at the newly completed branch.

But tremors in the agricultural markets and industry have made impacts on vendors of heavy equipment, including Binkley and Hurst and Rockingham New Holland on West Market Street in Harrisonburg.

“We haven’t sold much [heavy agricultural equipment] that’s not for consumer use over the last year and a half,” said Russ Tarkinson, the general manager of Rockingham New Holland. “It’s been really slow as far as anything larger than 30 to 45 horsepower tractors.”

It comes as a time when the number of midsize farms continues to dwindle, according to data from the U.S. Department of Agriculture National Agricultural Statistics Service.

However, many smaller farms, which are not the operators’ main source of income, have sprouted up, and Rockingham New Holland saw the potential, according to Tarkinson.

“You have to gear up your business for what the market demands,” Tarkinson said.

Rockingham New Holland diversified its offerings to provide the items that are needed by these small-scale or hobby agricultural operations, he said.

“As [more middle-sized farms] close and we get more residential customers, we still have the ability to provide them service and parts — that’s our main advantage over Lowe’s and Home Depot. When you have a problem with your product, we can help you with it instead of dialing a 1-800 number and talking to someone at a call center,” Tarkinson said.

Binkley and Hurst has also felt tremors to its business through the national agricultural markets, such as in the dairy industry, where farmers have been battered by low prices for years.

“The last few years, I think we have seen some declines with our dairy customers, although it seems like there is more optimism in the dairy market now than maybe two years ago,” Auville said.

He said Valley farmers have expressed interest in autonomous equipment, such as self-driving tractors, and companies like AGCO and New Holland have responded.

“I feel like everybody’s trying to do their best to be inventive on new things that come out as far as technology, which seems to be the big push,” Auville said. “Each one of the companies is really putting a strong effort, being the leader of that, and trying to come out with a cutting-edge thing that the other guys don’t have.”

Farmers sometimes have issues directly stemming from the ever-increasing technological kit on farm equipment, such as tractors, according to Tony Banks, senior assistant director of agricultural development and innovation at the Virginia Farm Bureau.

“One of the concerns that we hear — especially with the newer models and the ones that have more tech — it’s a lot of stuff a farmer can’t service it himself,” Banks said.

He said qualified technicians sometimes need to come out to the farmer to work on the equipment, but they then run into issues with software or diagnostics since the technology cannot access the internet.

“This is another example of the need for rural broadband connectivity for businesses in both farms and the repair companies,” Banks said.

Some new licenses and agreements also do not allow the buyer to tamper with or make adjustments to the equipment or it may null a warranty, according to Banks.

“When folks are used to working on their own equipment in many cases as opposed to waiting for a technician, that can be frustrating,” he said.

The most attractive thing to Valley buyers seems to be strong service contracts, extended warranties and protections, according to Auville.

“The tractors that we’re selling, especially in our high-horsepower market … those [buyers] have to use those tractors a lot each year to make them financially affordable,” Auville said.

He said farmers and buyers are looking more intensively at purchases of heavy equipment more so than in the previous six to eight years.

Farmers want “the ability for them to know that they’ll be taken care of if that tractor goes down because they have to run,” Auville said.

I heard an article on NPR about copyright and software and maintenance and did you notice it gets worse and worse? That was a year or two ago. The bigger story is land. It gets sucked up, just like the wealth. Mnuchin is one. We are living a losing battle, but on the bright side we can have a government... an actual government.