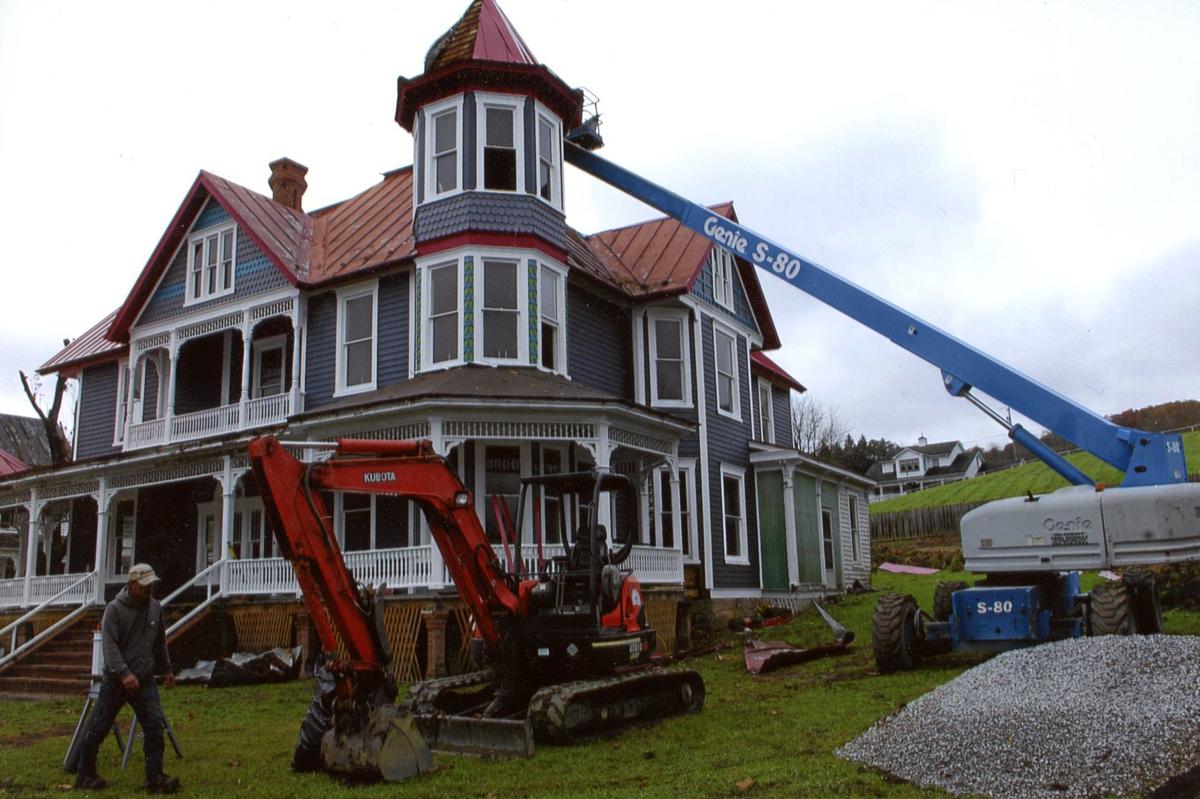 The historic Preston Boggs home on Main Street in Franklin gets a new roof as part of renovation efforts. 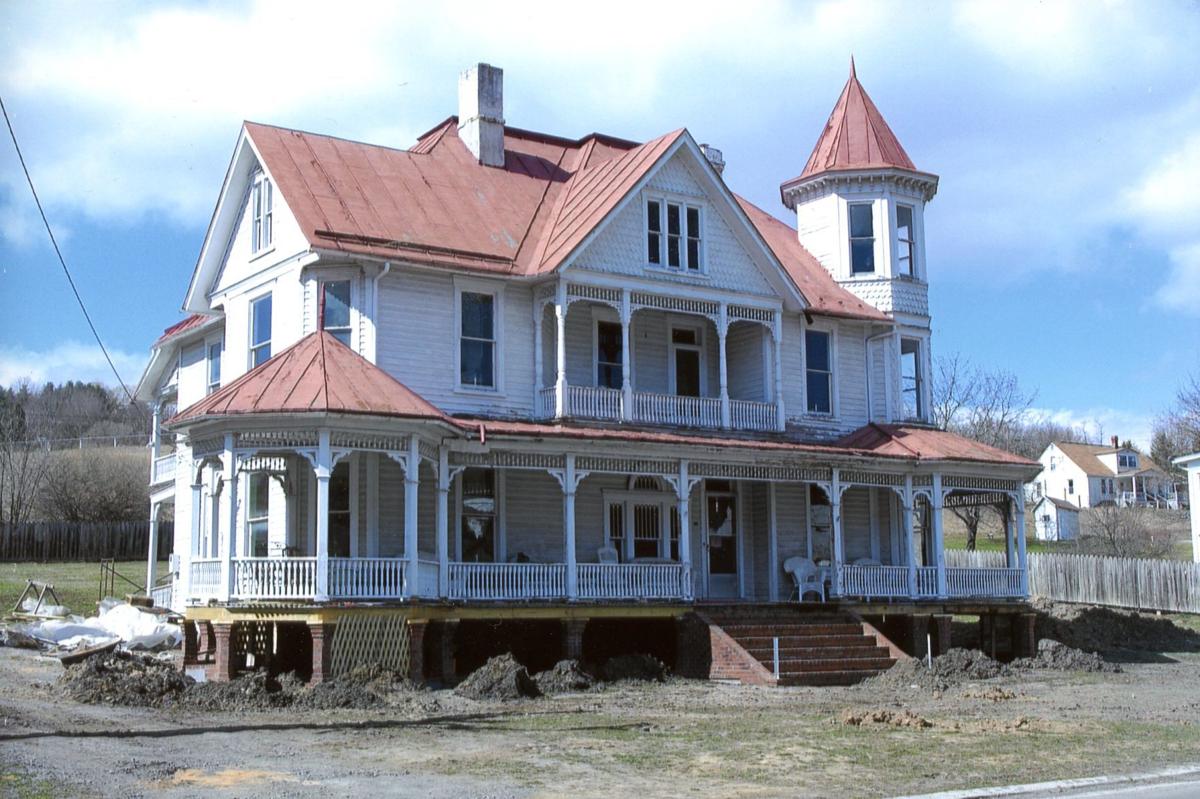 The Preston Boggs house prior to renovation work. Anthony Judy and his fiancee, Rhonda Halderman, fell in love with the home.

The historic Preston Boggs home on Main Street in Franklin gets a new roof as part of renovation efforts.

The Preston Boggs house prior to renovation work. Anthony Judy and his fiancee, Rhonda Halderman, fell in love with the home.

FRANKLIN, W.Va. — Passion, paint, money and patience are needed to restore a neglected century-old house on Main Street into a vibrant family home.

"We're on our third year. We hoped to be in earlier, but now we're shooting for September," Anthony Judy said as he sat on a white antique wicker porch chair.

Built by Dr. Preston Boggs in the early 20th century, the house is described in a walking tour brochure as a large frame Queen Anne-style home with gables trimmed in decorative shingles, an elaborate wraparound porch and a polygonal three-story tower.

Judy and his fiancee, Rhonda Halderman, fell in love with it, bought it in August, 2017 and visualize restoring it to its former glory.

Facing negatives, Halderman worried about going into debt, the three-hour drive from her flying homeport in Dulles and the distance from all of city's amenities.

Halderman is a purser and lead flight attendant with United Airlines. She has no plans to retire now, "because the house will be a money pit." She used to come to Franklin to visit. "It's funny — I once sat in this front yard for a Treasure Mountain Festival parade," she said.

Judy has roots in Franklin and returned with his mother in 1968 after his Dad died. In 1976 Judy joined the Navy and traveled the world earning the rank of master chief. Now he works for the Armed Forces Service Corp.

He would drive by the house thinking it was such an "eyesore." The house is a mail order blueprint home, designed by George F. Barber, a carpenter-turned-architect entrepreneur, who used magazine advertising to build a firm employing 30 draftsmen and 20 secretaries. The company generated blueprints and dealt with thousands of clients located in nearly every state of the union, as well as South Africa, Europe, Japan and China, according to "Architects and Builders: A Biographical Dictionary."

Barber's clients included bankers, professionals, farmers and wealthy industrialists, all attracted to his pictured house designs "targeted to modern early 20th century American tastes and standards of comfort." His success might reflect the scarcity of local architects during this era.

Dr. Preston Bogg's wife, Gertrude Bowman, saw this home in the "Petersen Magazine" and selected the plan as her dream house, which was finished about 1905. Mrs. Boggs was an artist and used a turret bedroom as her studio, flooded with natural light from the circle of windows.

After Dr. Bogg's death, she rented and later sold the house to Dr. Jasper Moyers, who was a circuit riding physician. Moyers had practiced medicine for years at Oak Flat outside Franklin and moved to the town so his daughter, Theda, could attend a good high school.

Legend has it that on Sundays, friends would gather at Moyers' house to concoct some of the medications for him to dispense to his patients the following week. When he died, Theda Mallow inherited it, and, at her death, her son, Dr. John Allen Mallow, received the property and sold it to Judy and Halderman.

Theda Mallow was a hoarder, keeping everything. "We have found some pretty cool stuff among the trash all over the house and outbuildings," Judy said. "Old medicine bottles, license plates, photos, negatives, tax bills. In 1936 the tax was $91.64. Everything here that is salvageable, we are saving," he said.

The house is on the National Register of Historic Places. "There are some tax benefits, but that will all go right back into the house," Halderman said.

So far the roof has been painted its original red color. The house, which was originally a "forest green," is now "calligraphy blue" trimmed on the shingles with contrasting color and finished with red doors and trim.

"If you look at historic homes, such as Queen Anne and Victorian, you find that houses were painted in several colors," Judy said.

The front steps are now brick, the basement cemented and tight, and the electric and plumbing updated. The trim around the porch and lattice work below is white. "But the porch ceiling is pale blue, which is supposed to repel insects," added Judy, who has done a lot of the inside work and trim painting himself.

The inside woodwork is elaborate with mantles, detailed in dentils and fluted columns; carefully molded doors and window frames; and a square staircase stretching from the entrance hall through two landings to the second floor. Tradition has it that one of the square finial-topped stair posts has a copy of the original blueprints stashed inside.

Judy is adding contemporary-aged pocket doors from northern Pennsylvania, a bathroom sink from Ohio, a kitchen sink and island from Fredericksburg, a dutch door from a post office in California and a carved oak and glass door from Dover, Delaware, to the originals in the house.

"This will be a family home to five children and 14 grandkids — a reunion site for family gatherings and holidays," Judy said. "We are happy we bought the house," he added.

How wonderful. I hope there will be an updated profile when the house is fully renovated.