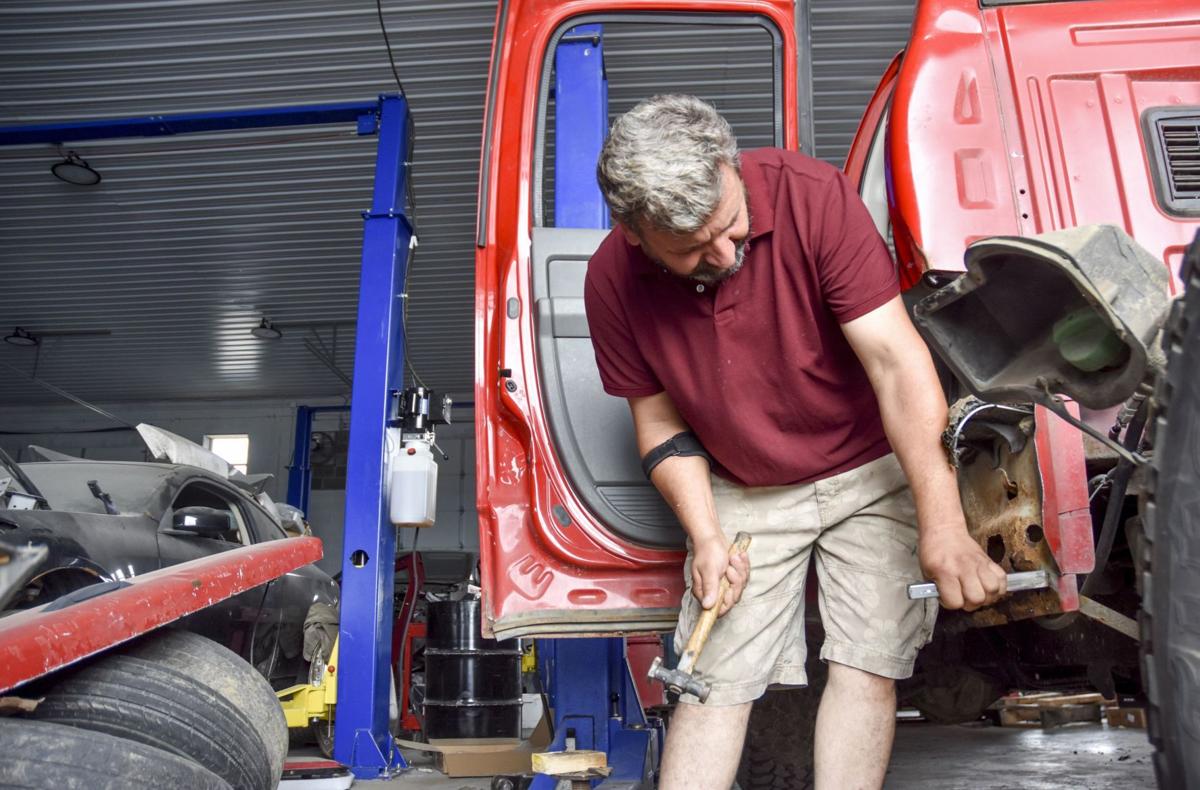 Ahmed Abdullah chips away rust on a car he is fixing for resale at his business on Thursday. 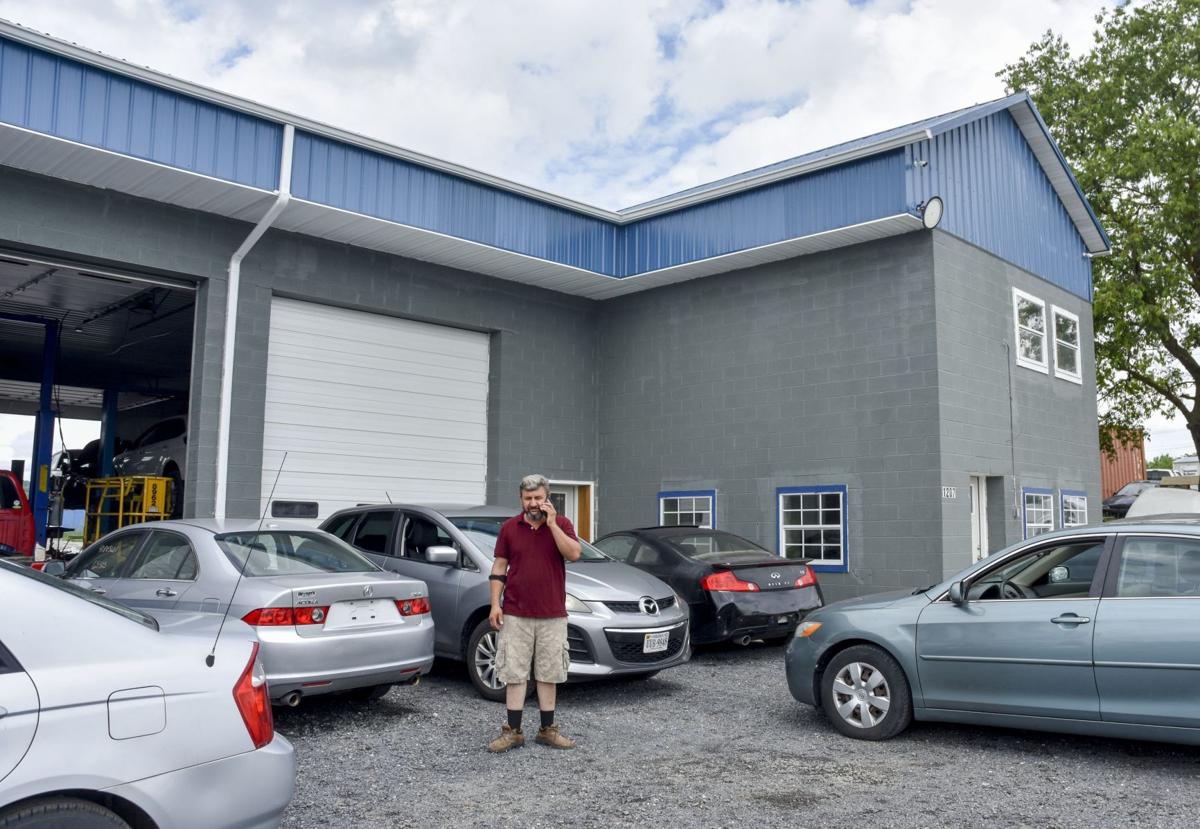 Ahmed Abdullah, a city resident and Kurdish immigrant, talks on the phone outside his 7,000-square-foot garage he built for his business, which has been denied a special-use permit to operate. He has been in court proceedings with the city prior to his application for a special-use permit. 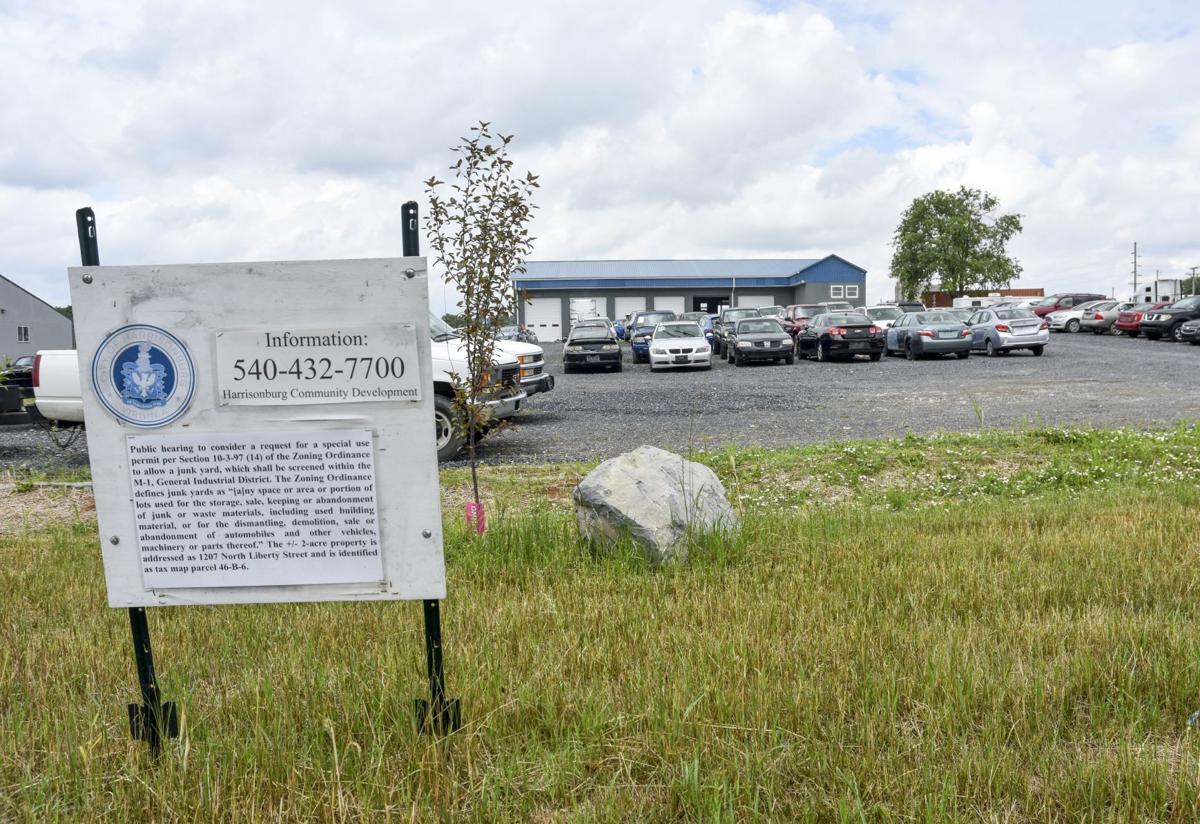 The view from the front of Ahmed Abdullah's garage on North Liberty Street. 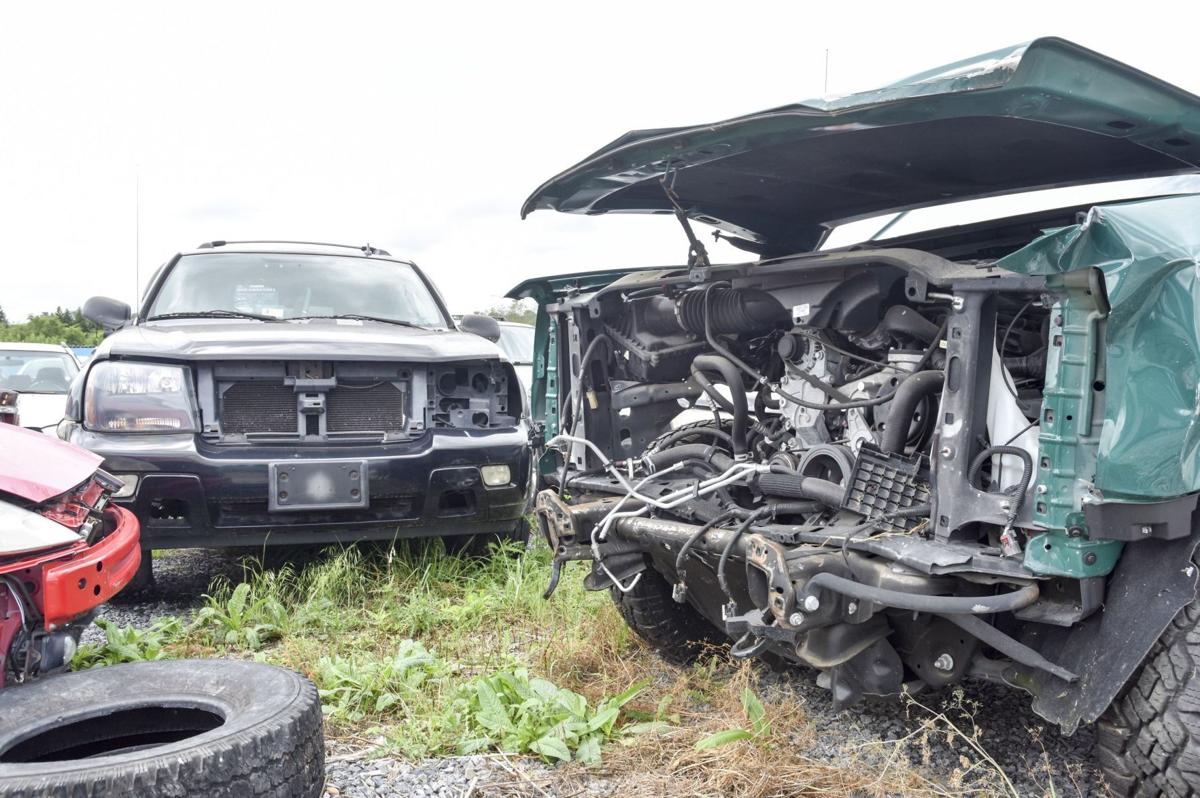 Some of the vehicles in the back lot of Ahmed Abdullah’s garage. This is the part of his business he wants the special-use permit for a junkyard.

Ahmed Abdullah chips away rust on a car he is fixing for resale at his business on Thursday.

Ahmed Abdullah, a city resident and Kurdish immigrant, talks on the phone outside his 7,000-square-foot garage he built for his business, which has been denied a special-use permit to operate. He has been in court proceedings with the city prior to his application for a special-use permit.

The view from the front of Ahmed Abdullah's garage on North Liberty Street.

Some of the vehicles in the back lot of Ahmed Abdullah’s garage. This is the part of his business he wants the special-use permit for a junkyard.

It was cool in the garage bay early Thursday afternoon compared to just a feet away in the sun outside.

Ahmed Abdullah was chipping away rust on a red Dodge pickup he is fixing in his business at 1207 N. Liberty St. The other vehicles packed in the six-bay, 7,000-square-foot garage sat silent.

Across the road, Amvets Post 7 was empty, and there was some activity at the Rockingham County Public Schools bus facility. Behind Abdullah’s workshop, the self-storage site was still, same with the lot to the north — trailers peppered around, motionless. To the south, JL Towing was quiet.

Though this may seem an industrial part of town, Harrisonburg City Council voted down a special-use permit request from Abdullah to have his property classified as a junkyard after an over 45-minute presentation, discussion and public hearing at the Tuesday meeting.

The denial presents a difficulty to the city business owner because he uses that lot for storage of seriously damaged vehicles he wants to repair — just like the Dodge — for resale as a dealer. But he needs the junkyard permit to have inoperable vehicles on his lot for the extended period of time he may need for repairs or to source parts.

But that’s not the only reason cars could be on his lot, he said before pointing to a forest green Chevrolet pickup with major frontal damage.

“This one is a 2017. It’s not going to be easy right away to fix it,” Abdullah said. “I have to keep them someplace before I get all the parts.”

Now, with City Council’s denial, the path forward for his business is unclear.

City staff was not available to discuss the matter Thursday afternoon.

Staff has been in contact with Abdullah in the past about how his roughly 2-acre site had been out of compliance since 2019.

That year, Abdullah was given notice he violated code and needed to bring inoperable vehicles inside his garage. In November, he was informed he needed the special-use permit to continue storing and dismantling vehicles.

The two parties have been in court proceedings, Adam Fletcher, director of community development, said during Tuesday’s City Council meeting.

Abdullah buys his cars from auctions to repair and resell. Of the cars he repairs, some he ships back overseas to Iraq and others are sold here.

In his application, he planned to keep operable vehicles that are for sale in front of the garage facing North Liberty Street, while damaged vehicles would be stored in the rear behind the garage and surrounded by a fence with tarp.

Staff said they are concerned about granting the special-use permit for the junkyard near the busy roadways of North Liberty Street and Mount Clinton Pike, as well as potential nuisance complaints from neighbors. They said there are places in the city they would look favorably at granting a junkyard special-use permit.

During the meeting, Fletcher also said staff are concerned about the precedent set by granting a junkyard special-use permit at a busy intersection.

He also said the primary use of Abdullah’s site would be a junkyard, while other businesses, such as JL Towing, use vehicles for similar purposes, but it’s not their primary function.

“The dismantling of vehicles can occur inside a structure,” Fletcher said.

The special-use permit is important for Abdullah to get certification from the Department of Motor Vehicles as a rebuilder, salvage dealer and his business as a salvage pool, he said.

Abdullah called into the public comment period to ask City Council for approval.

“I’m going to be losing a lot of money if I do not have this approval,” he said.

He also called into the Planning Commission meeting, where the advisory board heard his request, though it ultimately voted to recommend denial, 6-0.

“All I want is to get the damaged car, fix it, rebuild it and resell it,” Abdullah told Planning Commission on May 12, according to the meeting minutes. “If I do not get this permit, I cannot get anything approved from the Department of Motor Vehicles or from the dealer board. That way I wasted money for building that 7,000-square-foot building.”

Abdullah moved to Harrisonburg in 1998 after first coming to America from Kurdistan in northern Iraq a year before.

Before owning the garage, Abdullah worked in a poultry plant. He said that experience is also a driver for him to provide working cars for a cheap price to people who need them.

He said the cars in the worst condition would be kept behind the garage, located far from the roadway and with the view blocked by a fence.

Councilman Sal Romero was the only member of council to not vote to deny Abdullah’s request. He said he didn’t feel comfortable voting and wanted more information about the situation.

Perhaps you are speaking from the philosophical stance of an anarcho-capitalist, Mr. Wingnut. That said, do you think Mr. Abdullah voluntarily obtained this property knowing (or having should have known) what the zoning rules were for it? If so, was he responsible for his action/decision or do wish to portray him as a victim deserving of special treatment?

And, might I reiterate it was I who said his citizenship status should be irrelevant.

Mr. Abdullah’s citizenship status is irrelevant to a zoning decision – unless, of course, it was taken into consideration.

oh stop being a baby, Donald. You’re either for personal liberty or against it and I guess you come down on the side of the liberals.

So, are you saying, Mr. Wingnut, that Mr. Abdullah’s status as an immigrant should mean his request should get special treatment from the Council? Why?

no, donny, it means you fixating on that when his ability to do what he wants on his own property is being infringed is a snowflake reaction. You sound like you care more about him being an immigrant than you do about his rights being violated by democrats.