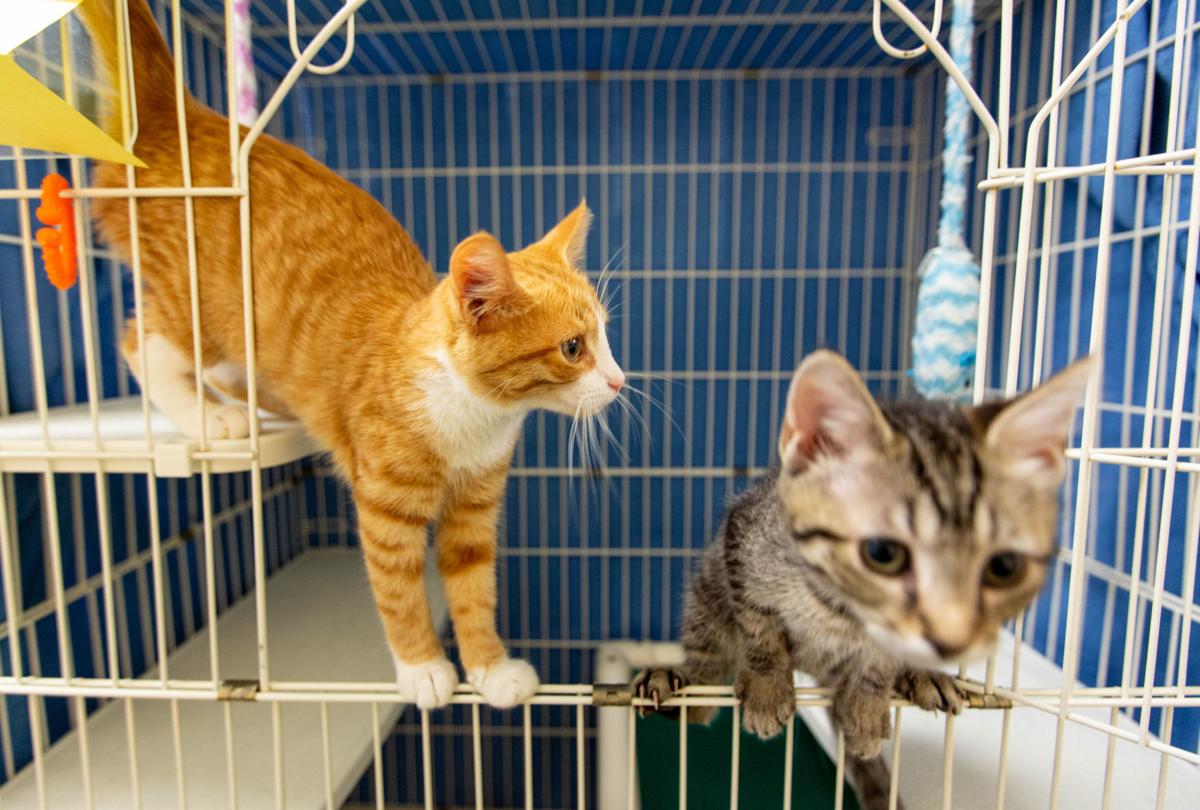 Butterscotch, left, and Poplar play in the door of their cage as they await adoption Tuesday at the Rockingham-Harrisonburg SPCA on Old Furnace Road in Harrisonburg. 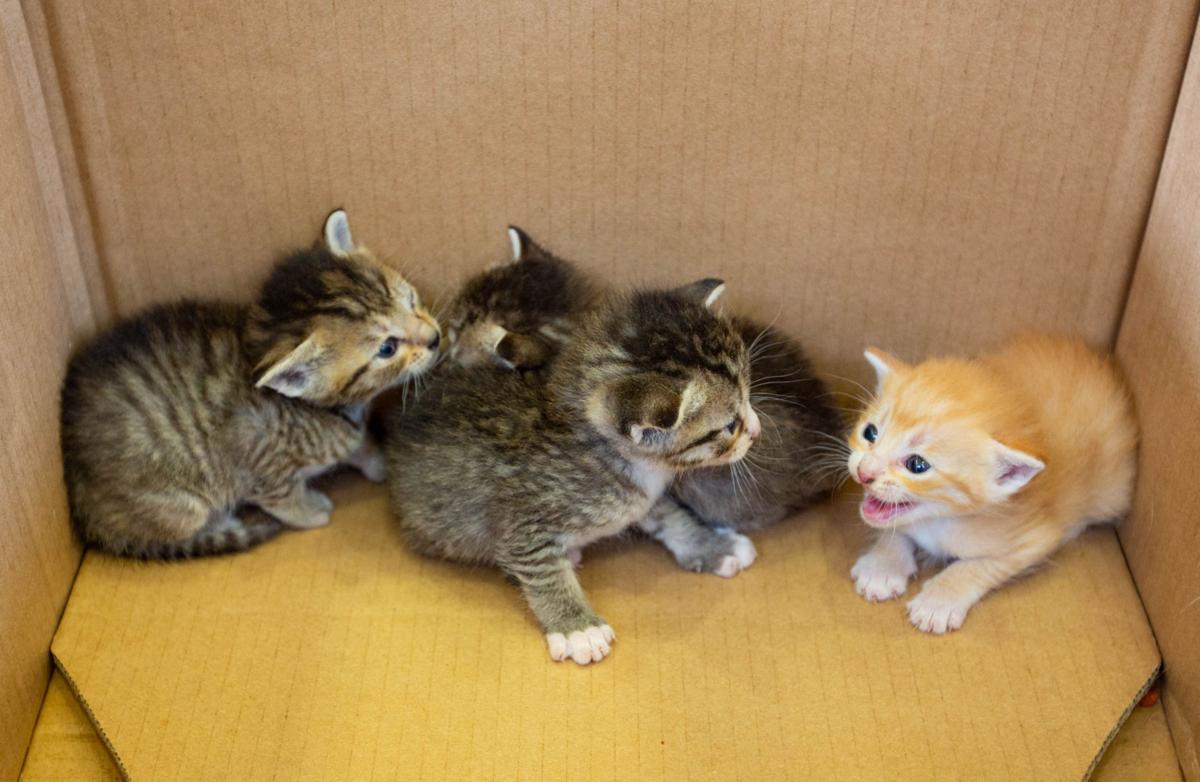 Kittens arrive at the Rockingham-Harrisonburg SPCA in a cardboard box Tuesday. 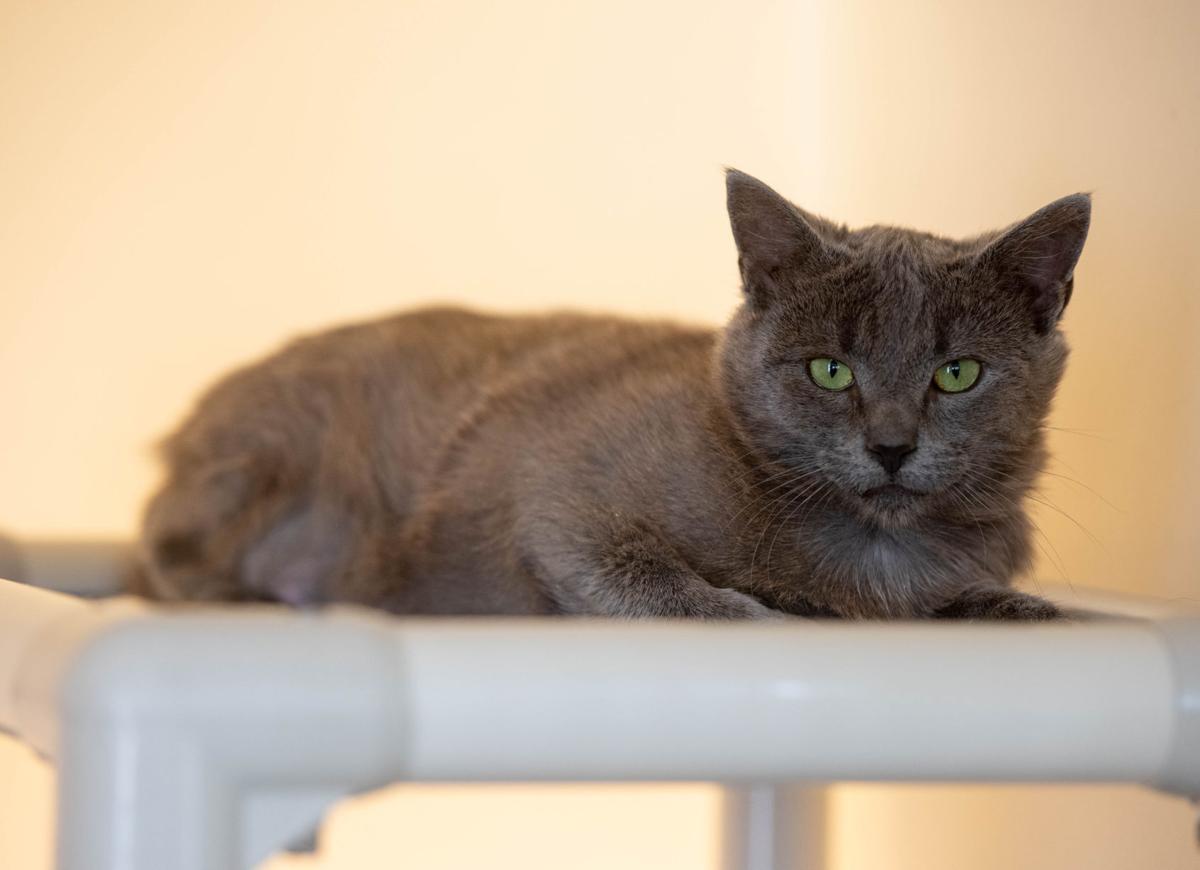 J.G. Wentworth looks out of his kennel as he waits to be adopted at the Rockingham-Harrisonburg SPCA Tuesday.

Butterscotch, left, and Poplar play in the door of their cage as they await adoption Tuesday at the Rockingham-Harrisonburg SPCA on Old Furnace Road in Harrisonburg.

Kittens arrive at the Rockingham-Harrisonburg SPCA in a cardboard box Tuesday.

J.G. Wentworth looks out of his kennel as he waits to be adopted at the Rockingham-Harrisonburg SPCA Tuesday.

Before it was 11 a.m. Tuesday, a cardboard box filled with four kittens found its way into the lobby of the Rockingham-Harrisonburg SPCA.

And they wouldn’t be the last.

Within the last two months, the shelter has gone from having a few empty cages to transforming its conference room into an overflow area filled with crates and cat toys.

On a day-to-day basis, Nawaz said, an average of 10 to 15 kittens come into the shelter’s care. In the nearly three years Nawaz has been with RHSPCA, he said intake rates are higher than ever.

The increase in cats correlates to what is known by animal shelters as kitten season — a period of time between April and October when outdoor cats breed “prolifically,” said Tiffany Corbin, RHSPCA marketing and fundraising manager.

June’s record high intake resulted in an increase of more than 100% compared to May, Nawaz said, and the remaining months in kitten season aren’t showing signs of slowing down. As of Tuesday, there are 142 cats in the shelter’s direct care and 140 cats in foster homes.

All available spaces in the adoptable cat room and stray room are occupied.

With no room to spare for incoming cats, Nawaz is encouraging Harrisonburg and Rockingham County residents to consider fostering to allow the shelter to take in animals in need of care.

In a press release, Corbin said fostering a pet will save two lives — the animals being fostered and the animals able to take their place at the shelter.

Nawaz said that during the first year of the COVID-19 pandemic, there was significant interest in the shelter’s foster program. Although rates have slowed down, there has still been an increase in foster sign-ups, but not enough.

To become a foster with RHSPCA, those interested must attend an online orientation. As of Tuesday, the shelter has scheduled three orientations — one today and the others on Saturday and Aug. 7, both from 2:30 to 4 p.m.

To meet the demand, Nawaz said the shelter is offering on-demand foster orientations to those who have an idea of what pet they can foster, have a room selected to place the animal in and have all residents in a home in agreement on fostering.

Fostering is only one element of tackling overcrowding at the shelter. The other is adopting.

“A plea for foster is a plea for adoption,” Nawaz said. “The challenge is, the kittens are not adoptable yet.”

Nawaz said the shelter is considering hosting a reduced adoption fee event in the upcoming weeks to attract potential adopters, but a decision has not been made.

Nawaz said that so far this month, there have been 35 kittens and 32 adult cats adopted at the shelter. In June, there were a total of 48 cats and kittens adopted.