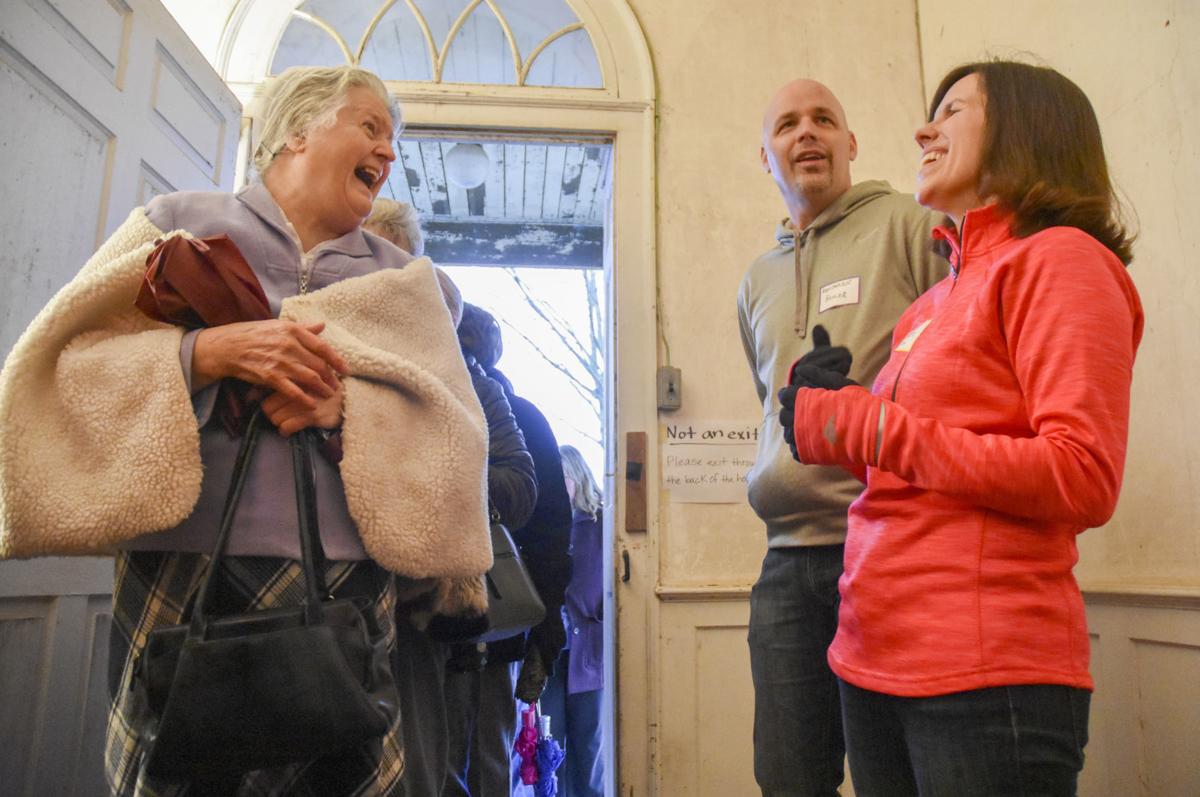 Emma Jane Burkholder, left, of Harrisonburg, talks with Benjamin and Sarah Bixler, right, in the foyer of the Lincoln Homestead on Wednesday during the Bixlers' open house. Burkholder said she previously cleaned the home in 1959. 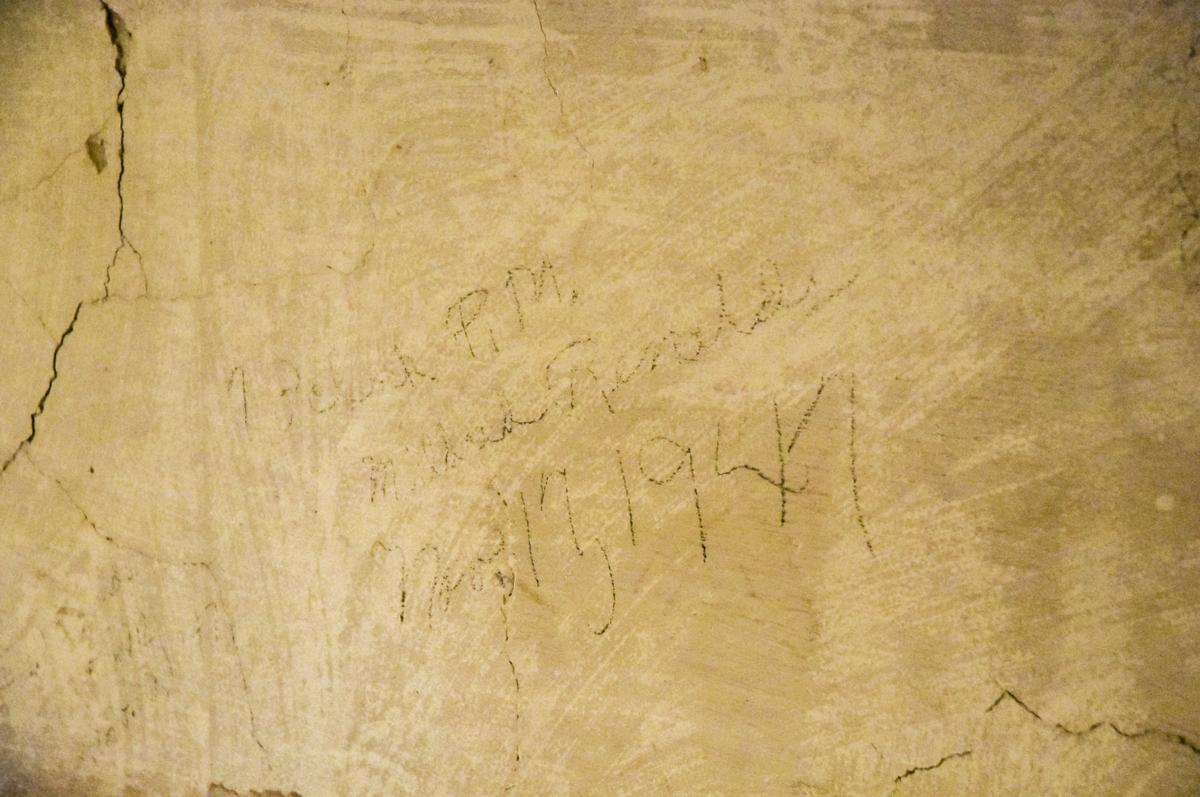 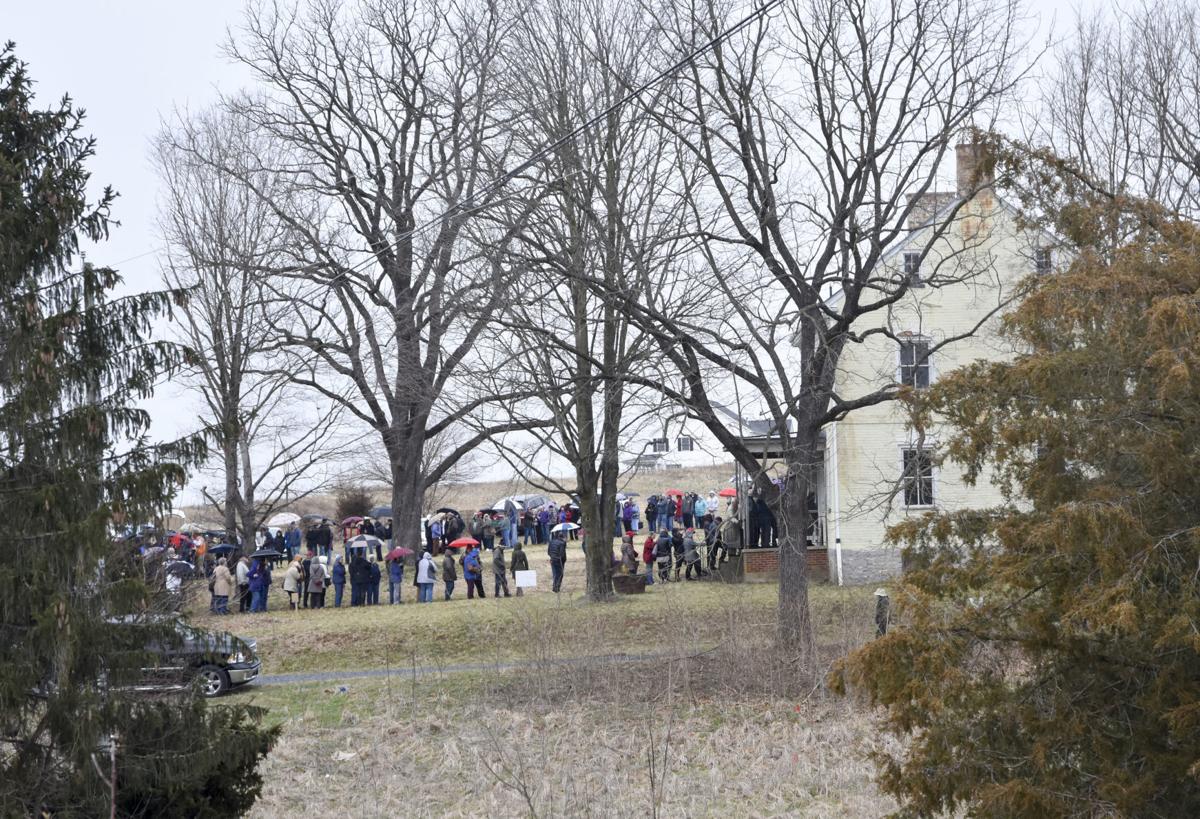 Sarah Bixler estimated around 250 visitors had already come through the house by around 5 p.m. Wednesday with still another hour to go during their open house of the Lincoln Homestead. 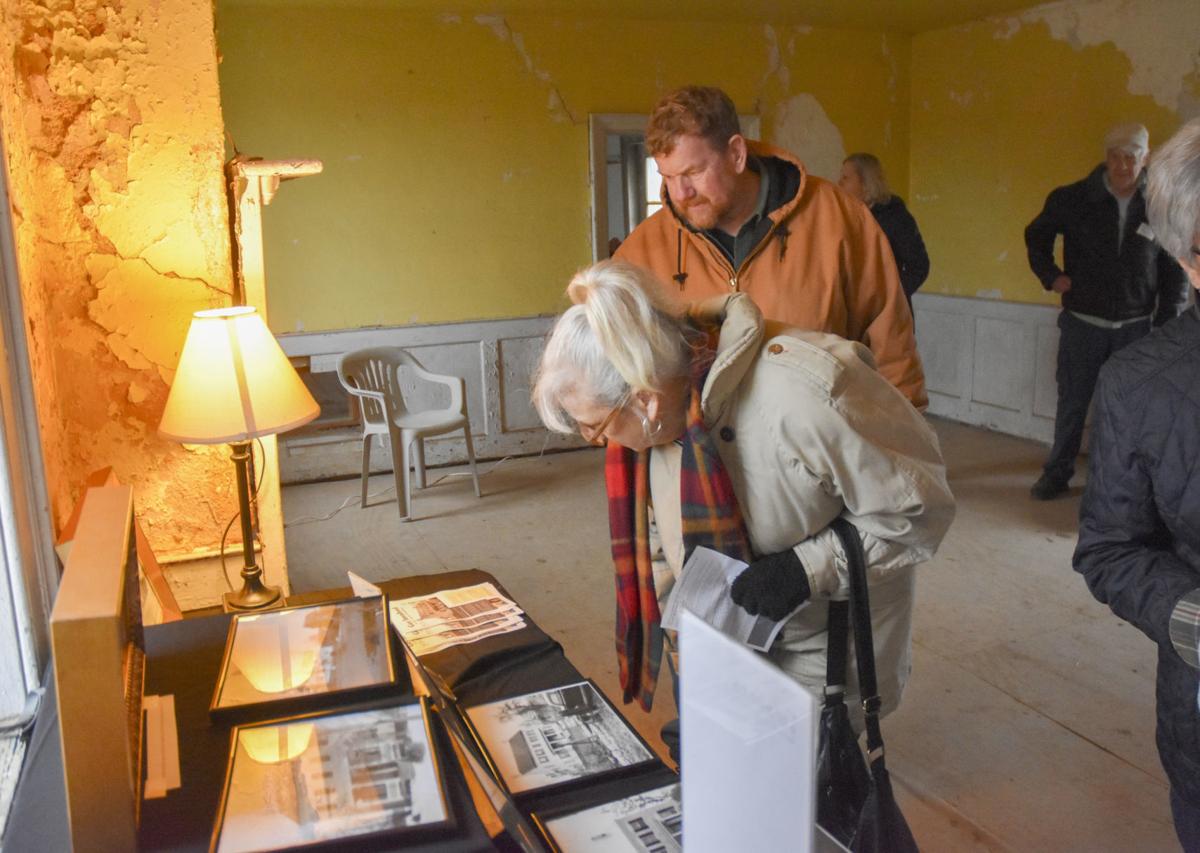 Norma, foreground, and James Nesselrodt, of Singers Glen, look at historic photographs of the Lincoln Homestead during Wednesday’s open house.

Emma Jane Burkholder, left, of Harrisonburg, talks with Benjamin and Sarah Bixler, right, in the foyer of the Lincoln Homestead on Wednesday during the Bixlers' open house. Burkholder said she previously cleaned the home in 1959.

Sarah Bixler estimated around 250 visitors had already come through the house by around 5 p.m. Wednesday with still another hour to go during their open house of the Lincoln Homestead.

Norma, foreground, and James Nesselrodt, of Singers Glen, look at historic photographs of the Lincoln Homestead during Wednesday’s open house.

In one of the two staircases of the Lincoln Homestead in Linville, a short message is scrawled in cursive — “seven o’clock p.m. Mildred Renalds Nov. 17, 1947.”

The now 86-year-old woman who wrote it, Mildred Wittig, nee Renalds, was one of the many visitors to the home where she lived between 1935 and the early 1950s. Benjamin and Sarah Bixler, who purchased the property last year, hosted an open house for the public to tour the historic building before they begin renovation work.

The home was built in 1800 by the great-uncle of Abraham Lincoln, but has been uninhabited in recent years.

Wittig said she didn’t remember writing the message on the wall, but has other memories from her childhood in the Lincoln Homestead, including one involving the home’s other staircase and her great-aunt, Byrd Manuel.

“On this staircase, my great-aunt was about 89 years old, and she would stand up and pull up her skirt, throw her leg across the banister and then slide down the banister,” Wittig said of the main staircase in the front foyer of the home.

Wittig now lives in Upper Marlboro, Md., with her daughter and came down for the open house.

“It seemed like it was a hotel — people coming and going all the time,” she said of the home. “Cousins would stay a week at a time.”

And one of her family members, Stephen Renalds, of Fairfield, was also at the open house on Wednesday. Renalds would stay at the homestead during vacation from the time he was born in 1939 until Wittig’s family sold the property 16 years later. He remembers trapping skunks on the property during his teenage years.

Wittig said she was glad the Bixlers are going to renovate the home.

“I’m thrilled that they appreciate the house and they plan to restore it,” Wittig said. “I think the Lincoln history is wonderful, and I’m thankful that they had the vision to preserve the house.”

Many other visitors also had ties to the home, such as Emma Jane Burkholder, of Harrisonburg, who used to clean the house back in 1959.

Other visitors were also grateful to the Bixler family for letting them see inside the home before renovation begins.

“I have been wanting to come up here for many years, and I like the fact we have this amount of history in our Valley, particularly presidential history,” Pat Doorenbos said, as she stood along the numerous cars of other visitors that were parked on the shoulders of Harpine Highway.

“I appreciate history and I think we should do everything we can do to respect and restore that,” she said.

Another woman, Margaret Geisert, of Keezletown, also cheered the Bixler family on in their journey to fix up the home.

“It’s amazing and an amazing amount of work to restore it, and I’m glad somebody is going to do it,” she said. “It’s worth saving.”

She said the large cooking fireplace impressed her, but she was most impressed by the condition of the house given its age.

Several hundred folks took the Bixlers up on the invitation of the open house and filed through the paint chipping, peeling wallpaper rooms.

“We knew there were lots of people interested in this, or wanted to see the house, or asked about seeing the house, but to see this many people actually show up and walk through the house is just wonderful — to know the community cares about this project as well,” Benjamin Bixler said.

Benjamin and his wife, Sarah, will renovate the home with help from Benjamin’s parents, Lee and Mary Bixler, of central Pennsylvania. Lee has worked a career in restoration, and the Bixlers have experience in salvage and construction.

Sarah Bixler said many of the visitors also gave advice from their own experiences in repairing and living in old homes, and several descendants of the Lincoln family also visited.

The event was held on Lincoln’s birthday, after the annual ceremony held on the property by the Lincoln Society of Virginia.

Benjamin Bixler said the family is hoping to be able to move into the home after the renovation is complete by the summer of 2021.

In the meantime, they will also meet with historical preservation groups, such as Preservation Virginia and the Department of Historic Resources.

The Bixlers will also document much of the renovation in response to interest they’ve heard from the community for such a log, according to Benjamin Bixler.

“It’ll just be a really great moment to envision the end of that project and to envision what it will be like for our family — just to know that this will be a place that will be able to continue rather than to have been lost,” he said.